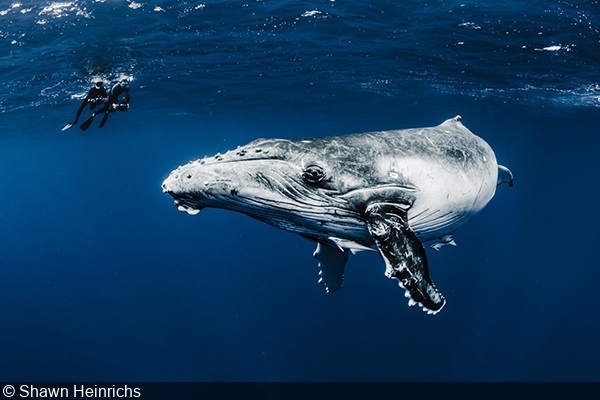 Whales are the biggest animals on the planet, and there’s no disputing they have giant appetites. But figuring out just how much they consume isn’t an exact science. A new study, published in the journal Nature, has now revealed that the boffins got this one wrong, very wrong: Baleen whales eat up to three times more prey—zooplankton, krill, fish, and squid—than previously estimated.

Why does this matter, you ask? In a word, poop. Whales are major nutrient recyclers. Their iron-rich feces act as a fertilizer for phytoplankton—microscopic organisms that draw energy from sunlight for photosynthesis—which are then consumed by krill, which are in turn devoured by whales, and so on. Remove whales from this loop and the iron would instead settle to the ocean floor in krill feces and carcasses, in turn depriving phytoplankton on the surface of the iron they need.

While scientists understand how baleen whales feed, working out how much they consume has been a challenge. In the past, scientists examined dead whales’ stomach contents, but such studies couldn’t say how much a given whale ate in a day, month or year. Furthermore, researchers’ models of how much food a whale would need to survive were based on the metabolic rates of other large marine animals, like captive dolphins.

In the new study, researchers led by first author Matthew Savoca, a National Science Foundation postdoctoral research fellow at Stanford University's Hopkins Marine Station, placed tags on 321 whales from seven baleen species living in the Atlantic, Pacific and Southern oceans between 2010 and 2019. Each tag was equipped with GPS, a camera, a microphone and an accelerometer. Secured only with a suction cup, the tag took measurements for about 5 to 20 hours before popping off. Tracking how each whale moved in 3D space revealed when the whales were engaging in feeding behaviors. In addition, the team captured drone shots of 105 whales to calculate body length and mass as well as how much water they could capture in one gulp. They also visited feeding sites and used echo sounders to measure the size and density of prey in order to estimate how much prey each mouthful might contain.

Combining all this data, the researchers determined that an adult eastern North Pacific blue whale eats around 17.6 tons of krill per foraging day, while a bowhead whale consumes about 6.6 tons. Knowing that baleen whales feed between 80 to 150 days out of the year, the scientists could ascertain how much the whales consumed in a single feeding season. For instance, baleen whales living in the California Current Ecosystem, between British Columbia and Mexico, were previously thought to eat about 2.2 million tons of krill annually, but the new study put the figure at closer to 6.6 million tons per year—three times as much.

Given that whale numbers were decimated in the 20th century, the team was even able to estimate how much more productive historic ecosystems once were—prior to the advent of industrial whaling. They concluded that these ecosystems were as much as 10 times more productive than they are today. The work emphasizes the importance of whale conservation through the expansion of marine protected areas, setting ship speed limits, regulating fisheries, and so on.