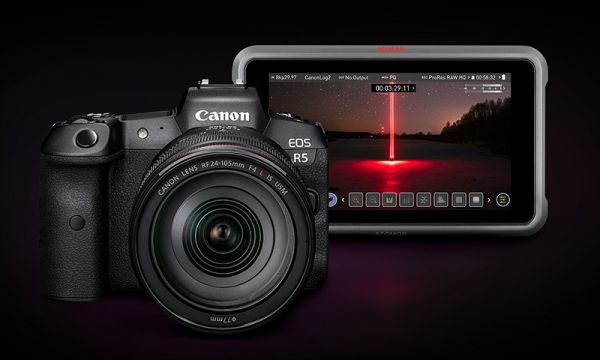 Australian company Atomos has announced a promised firmware update for its new Ninja V+ monitor/recorder that enables 8K ProRes RAW recording from the Canon EOS R5. Using the Ninja V+ reduces the strain on the R5’s processor, avoiding the camera’s usual half hour recording limit and any chance of triggering the camera’s thermal cut-off.

While the earlier Ninja V monitor/recorder isn’t capable of capturing 8K, the AtomOS 10.68 update adds the ability to record up to 5K/30p ProRes RAW from the Canon EOS R5. Other functionality in the firmware update will also be available to Ninja V users.

Melbourne, Australia – 19th August 2021 – Atomos is thrilled to announce that the firmware announced earlier in 2021 for the Ninja V+ to support 8K ProRes RAW from the Canon EOS R5 is now available to download.

Atomos and Canon are delighted to announce the ability for creators to capture stunning and pristine 8K ProRes RAW images from such an affordable, capable, and compact camera system. This will be a true game changer in content creation. When combined with the Canon EOS R5 full-frame mirrorless camera, the Ninja V+ will record 8Kp30 ProRes RAW.

The Atomos Ninja V+ coupled with the benefits of the Canon EOS R5 full-frame mirrorless camera are placing the power with creators by combining the first affordable 8K solution that will propel content creators to a whole new level of production. Canon and Atomos have democratized 8K for the masses with no compromise in quality.

Redesigned with a stealth grey bezel and expanded processing power, the Ninja V+ delivers even more options for creators. Using the new Atomos Silicon chip, the AtomIC3, and the AtomOS 10 technology, the Atomos team re-engineered the Ninja V+ to meet the evolving needs of the creator. This innovation increased the power to record ProRes RAW at even higher frame rates and resolutions.

Ninja V users will also benefit from AtomOS 10.68 with the ability to capture up to 5Kp30 ProRes RAW recording from the Canon EOS R5 alongside the other functionality included in the firmware update. White balance (WB) and ISO in Final Cut Pro adjustments will also be available to Ninja V users in post-production.

ProRes RAW continues to build momentum in 2021 with over 30 cameras supported by Atomos, cementing its position as the industry standard for RAW video capture. ProRes RAW combines the visual and workflow benefits of RAW video with the incredible real-time performance of ProRes. The format gives filmmakers enormous latitude when adjusting the look of their images and extending brightness and shadow detail, making it ideal for HDR workflows. Manageable file sizes speed up and simplify file transfer, media management, and archiving. ProRes RAW is fully supported in Final Cut Pro, Adobe Premiere Pro and Avid Media Composer, along with a collection of other applications including ASSIMILATE SCRATCH, Colorfront, FilmLight Baselight and Grass Valley Edius.

Join Atomos, Canon and content creator Levi Allen on the 7th September to hear all about the first ever content shot in 8K Apple ProRes RAW. Sign up here.