Aquatica, through its division Technical Lighting Control, has released the Aqua LED 800 Video & Focus light.  The unit is small (2" and 5.3" and weighs 3/4 of a pound) with 4 power settings that reach up to 800 lumens. 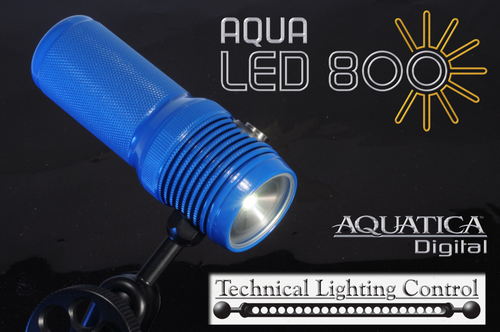 Technical Lighting Control, a division of Aquatica Digital, is proud to announce the release of its Aqua LED 800 Video & Focus light. This self contained powerful light of 800 Lumens is powered by two easily replaceable and rechargeable Lithium-Ion batteries. Its powerful, wide and soft beam is ideal as a video light and can be dimmed at the push of a single button when used as a focusing light. Four different power settings are provided: 20, 180, 360 & 800 lumens. Its consumption is so good that it will run for two continuous days on its low power setting.

Its simple design allows for quick battery swapping.  Two standard 18650 Lithium 3000 MAH batteries (included) inserted in a separate tray, protection is provided against voltage, current and temperature overload and against low voltage drainage. It provides a constant output over the batteries voltage range and its linear circuit design means there will be no flickering.

Contained in a rugged but elegantly machined aluminum housing, the Aqua LED 800 is equipped with a soft flood type reflector that will give 90 degrees of beam coverage through its 12 Watts LED for up to 100 minutes at the full power setting, this is twice the output of a 10 watt HID light.

The Aqua LED 800 brings light to the already extensive line of underwater lighting supports and accessories from Technical Lighting Control.

The light will be showcased at the DEMA show (November 17-20) at the Aquatica booth # 3742 in the IMAGE RESOURCE CENTER section of the show.