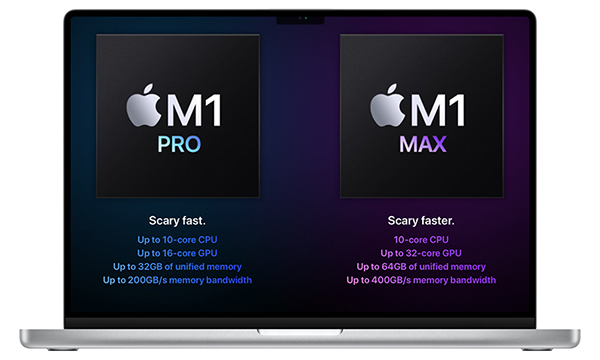 It’s been a little under a year since Apple introduced its first Macs with its own silicon, the M1, which included a 13-inch MacBook Pro that left many power users a little underwhelmed. Now, the company has finally properly addressed the pros—including underwater photographers and videographers, of course—with new 14-inch and 16-inch MacBook Pro models boasting ultra-powerful new M1 Pro and M1 Max chipsets.

The M1 Pro boasts (up to) a 10-core CPU design, a 16-core Neural Engine and up to 16 GPU cores. It can be paired with 32GB of unified memory and features 200GB/s memory bandwidth. Models with the M1 Pro chipset support up to two Pro Display XDR monitors and can play up to 20 4K ProRes 4:2:2 streams simultaneously, according to Apple.

The M1 Max features the same 10-core CPU and 16-core Neural Engine but can have up to a 32-core GPU design. It features 400GB/s memory bandwidth, supports up to 64GB of unified memory, and allows the connection of up to four external displays (a maximum of three Pro Display XDRs plus a 4K TV, for example). Apple says M1 Max models can play as many as 30 4K ProRes 4:2:2 streams at once or up to seven 8K ProRes streams at the same time.

The new MacBooks have enclosures made of 100% recycled aluminum and in a move that will delight shooters, offer three Thunderbolt 4 ports, an HDMI port, and an SD card reader. There’s also a good old 3.5mm audio port and something that will please all Mac users, a MagSafe power connection. Notably, the new models have also lost a much-maligned feature, the Touchbar, which has now returned to a standard function key array—“with the tactile feel of mechanical keys that pros love,” per Apple.

The displays also boast impressive pro specs. The Liquid Retina XDR panels render up to a billion colors, feature a contrast ratio of 1,000,000:1 and offer sustained brightness of 1,000 nits (1,600 nits peak). Variable refresh rates up to 120Hz are available via Apple's ProMotion display technology, and you also have the option of locking in the frame rate. The 14.2" and 16.2" panels both offer 254ppi pixel density, which translates to 3024x1964 pixels and 3456x2234 pixels, respectively. Oddly, the Notch also makes its first appearance on a Mac, which is bound to annoy plenty of users, as is the fact that it houses no Face ID camera: These MacBooks are still unlocked with a Touch ID sensor tucked into the corner of the keyboard.

The new laptops can be configured with up to 8TB of SSD storage boasting read speeds up to 7.4GB/s, and Apple claims the 70-watt-hour lithium-polymer battery offers 17 hours of video playback on the 14" model and up to 21 hours on the 16" model. 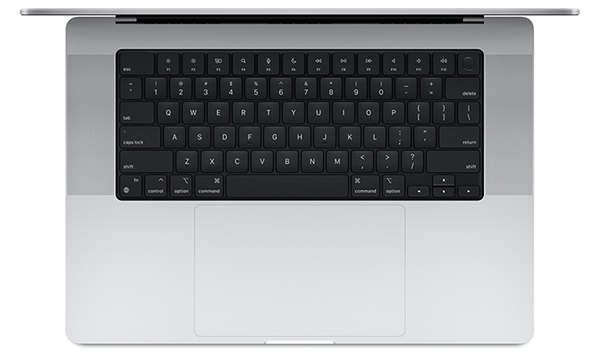