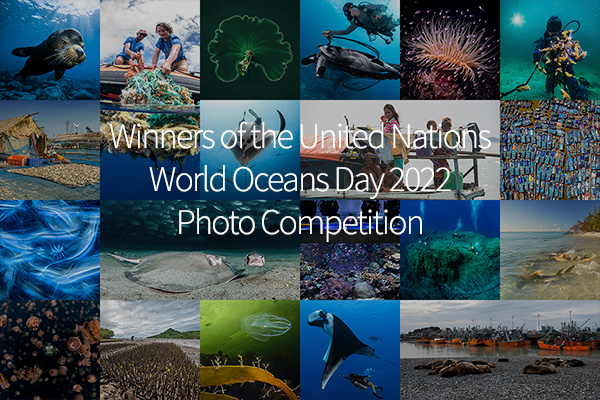 The United Nations World Oceans Day event and the photo competition are hosted by the United Nations Division for Ocean Affairs and the Law of the Sea, produced with the contribution of Oceanic Global and made possible by La Mer. The annual competition is curated by Ellen Cuylaerts, and coordinated with DivePhotoGuide (DPG) and the Intergovernmental Oceanographic Commission of UNESCO.

The United Nations World Oceans Day Photo Competition is an ongoing tradition that calls on photographers and artists from around the world to communicate the beauty of the ocean and the importance of the respective UNWOD themes each year. Winning photos from past years can additionally be seen at www.unworldoceansday.org and on DPG. 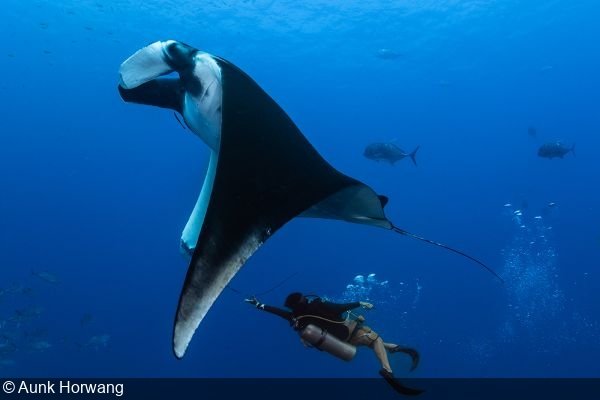 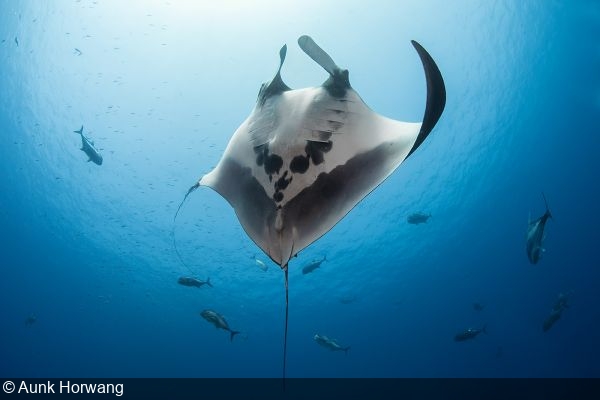 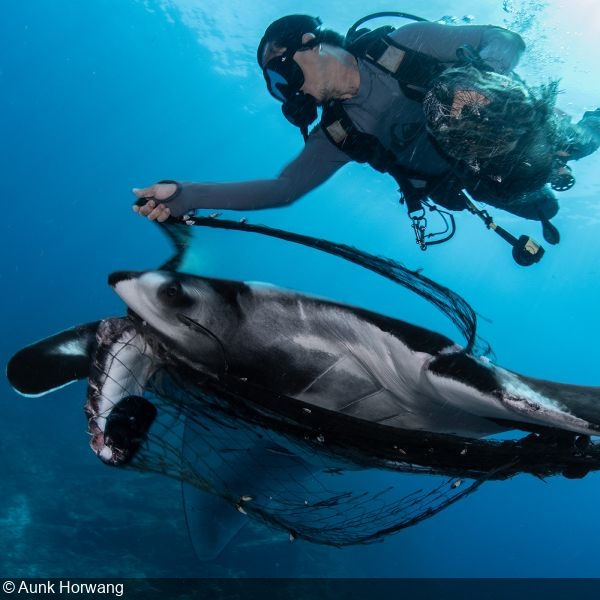 Ghost nets are some of the deadliest forms of marine pollution in the Thai oceans. On frequent occasions, ghost fishing nets entangle large marine creatures like this manta ray. This can be life threatening to them if not rescued, for example by a diver 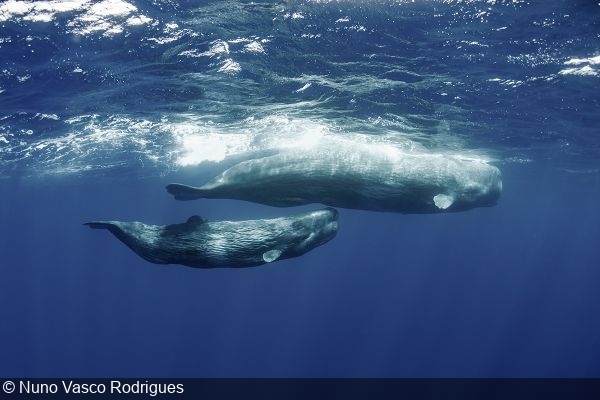 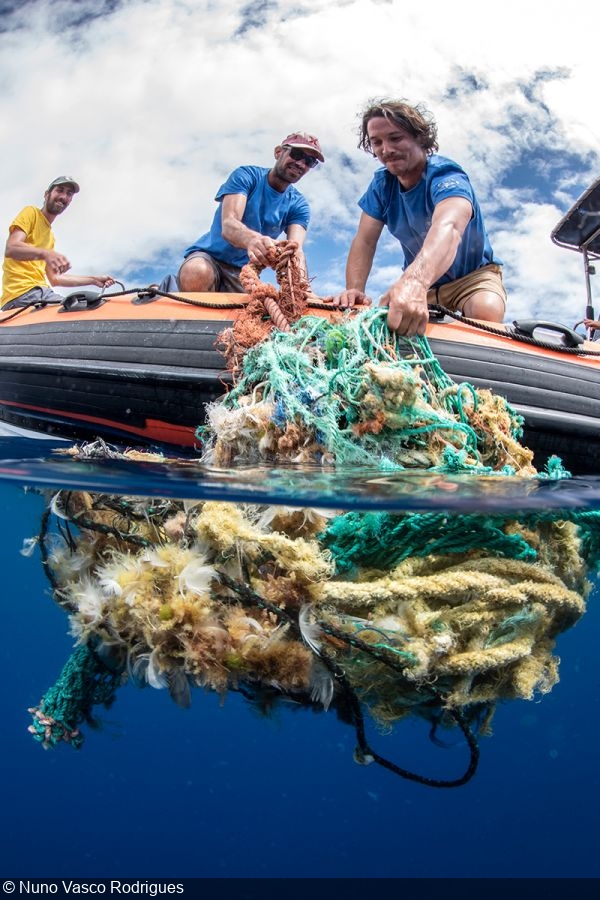 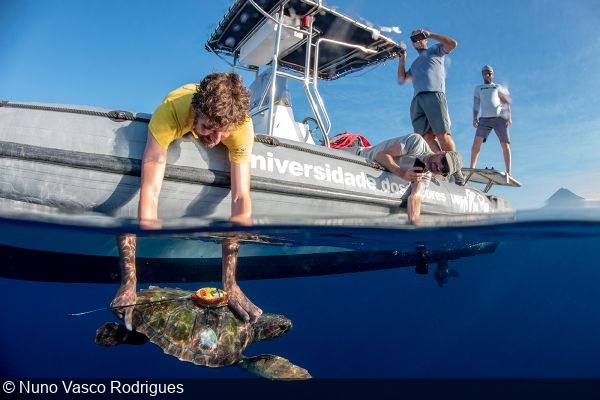 Top: A female sperm whale and its calf swim in the waters around the Azores Islands, Portugal. These animals were hunted in this region until the 1980s, but today they are protected and the population is thriving. They became a symbol of the region and attract tourists from all around the world, who can go and see the sperm whales while on local whale-watching tours. Middle: A team of scientists collects ropes and old nets from the sea surface south off Pico Island, Azores. Lost and abandoned fishing gear is the cause of death for marine life globally, every day. Bottom: A scientist from the University of the Azores prepares to release a tagged loggerhead sea turtle off Pico Island. The tag, attached to the animal’s carapace, will collect information about its movements, which is critical to better establish conservation strategies for this endangered species 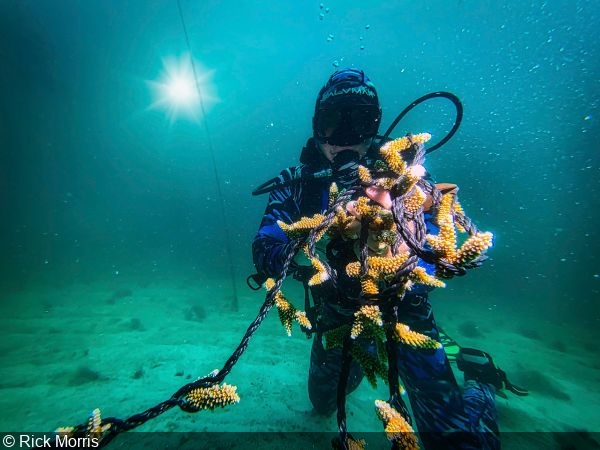 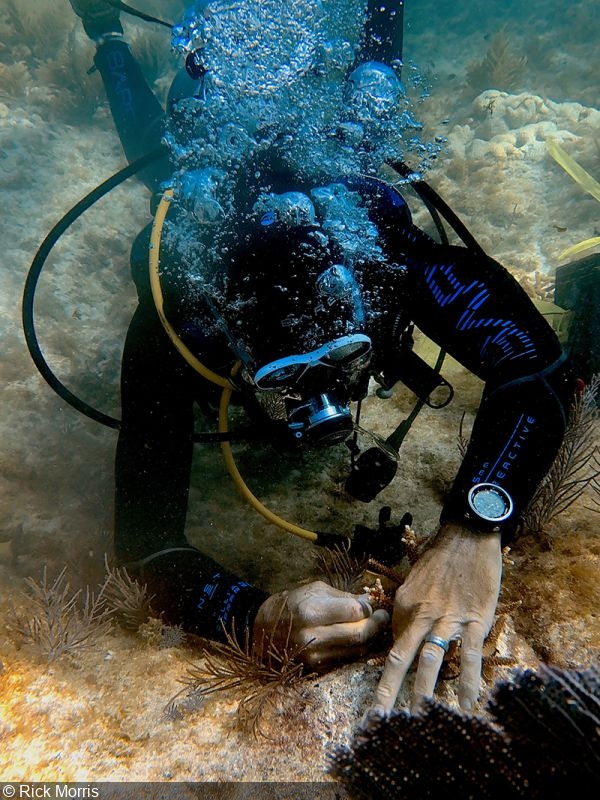 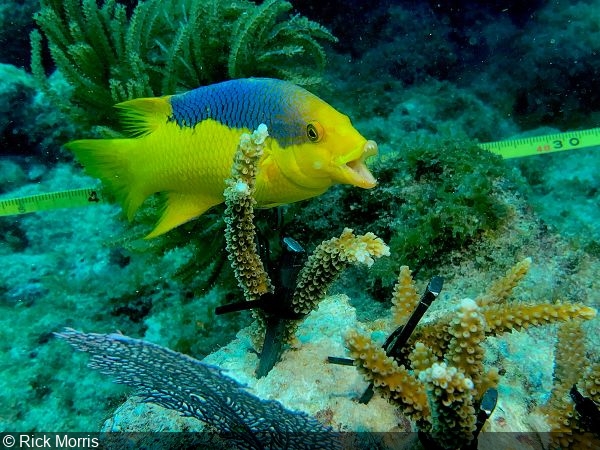 The three images in this series, “Welcome To The Neighborhood”, highlight the efforts and result of replanting newly raised corals on depleted reefs of the Florida Keys. These corals were raised to be environmentally adapted to their new environment to enhance viability and survival 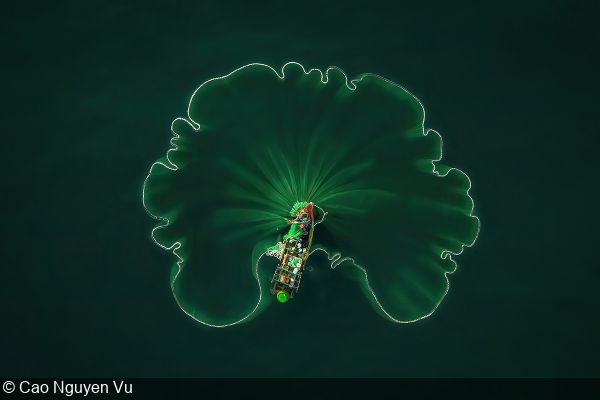 “Ocean Lotus Leaf”: In every profession we can find challenges but also beauty. When the fishermen head out on the water, they hope to return with boats full of fish and shrimp out of necessity. I simply want to convey the beauty of the art of fishing with seine nets in my homeland, Quang Ngai province, Vietnam 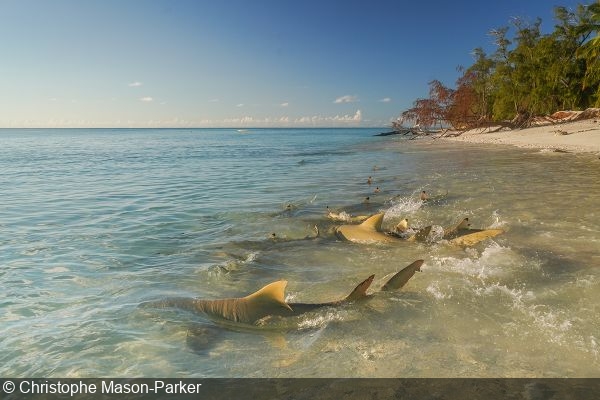 A lineup of lemon sharks (Negaprion acutidens) and blacktip reef sharks (Carcharhinus melanopterus) cruise in the shallow waters of Aldabra Atoll in the Republic of Seychelles. A UNESCO World Heritage Site since 1982, Aldabra is a shining example of the effect that 40 years of protection can have on biodiversity 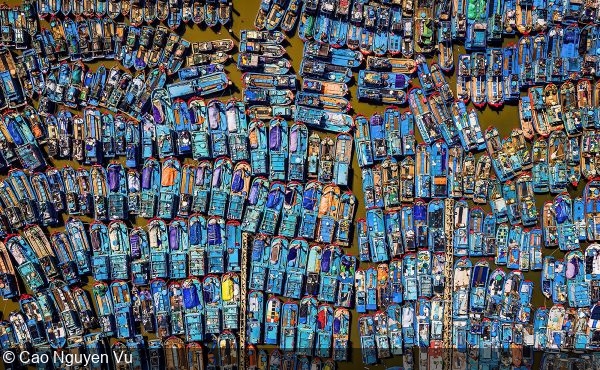 “Matrix of Boats”: This image shows fishermen’s boats lined up neatly when anchored to avoid super typhoon No. 9. It was the strongest super typhoon in 30 years, hitting Quang Ngai, my hometown, causing havoc: 325 completely destroyed houses, and more than 140,000 houses were damaged 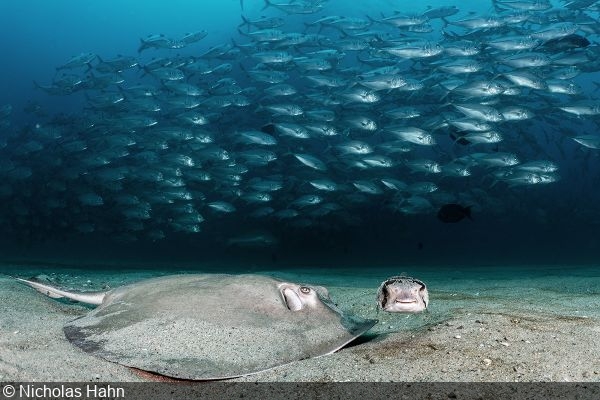 “Highway of Life”: A diamond stingray and a one-eyed porcupinefish search for a meal in the sand as hundreds of bigeye jacks school behind them. The incredible biomass in the Cabo Pulmo National Park (Baja California Sur) allows for some surreal sights. Protected areas such as these serve as a strong example of how plentiful our oceans can be when given the chance to recover 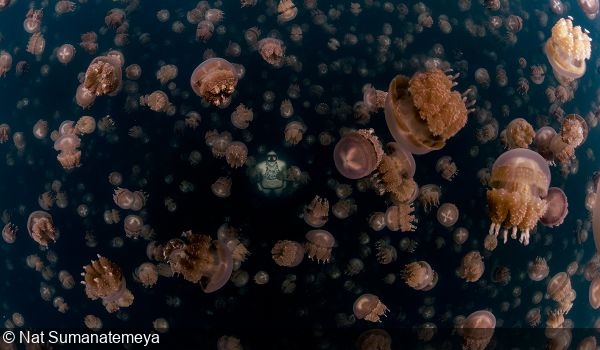 Julia Nilsson freedives with thousands of stingless golden jellyfish in Ongeim'l Tketau, or Fifth Lake, on Eil Malk Island in Palau. The image was taken in 2019 when the lake reopened after being closed for over two years. The impact of El Niño in 2016 caused declining numbers of golden jellyfish in Jellyfish Lake and the closure aimed to give nature time to recover 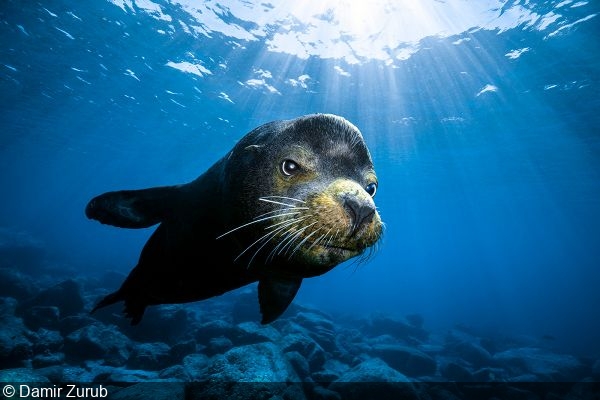 This image was taken in late 2021 when I was diving in Los Islotes, La Paz, Mexico, where a large colony of sea lions lives. Conversation and closeness with these animals was an unforgettable experience and I hope to have the opportunity to visit this beautiful place again 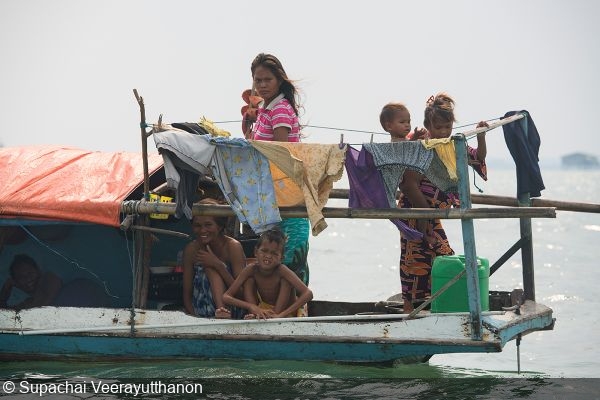 The Bajau, for many generations, from birth to death, from young to old, spend their entire lives on their boats. They are not citizens of any state. The sea is their birthplace and their only home on Earth 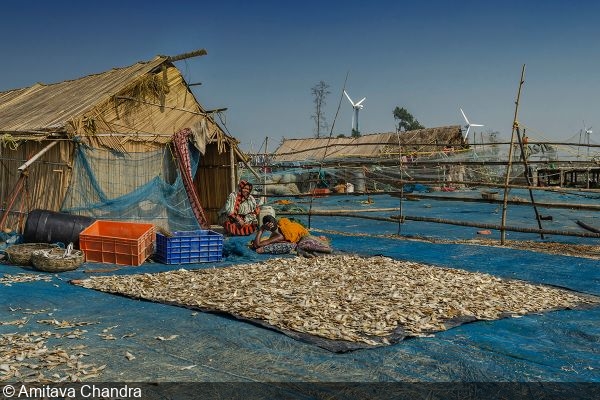 A couple have a family discussion after lunch at their thatched dwelling place. They belong to a fishing community that ventures out on the high seas to earn their livelihood. Nights are spent at sea to fish, and the natural sunlight during the day is used to contribute to the process of drying fish. They live on and around the ocean, and they are totally dependent on it for a sustainable living in this difficult geographical area. This image was shot in the coastal Frazuregunge area in the state of West Bengal in India 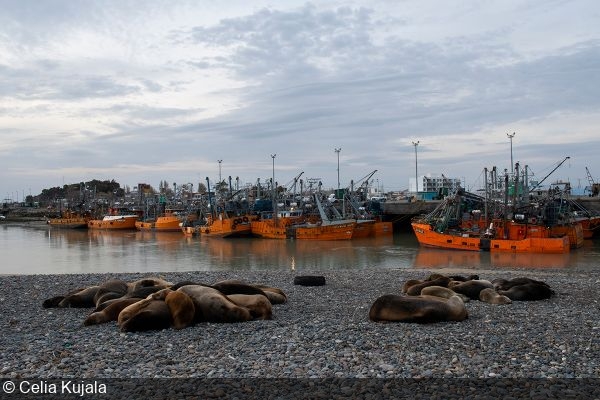 “Coexistence”: In Puerto Rawson, Argentina, the Chubut River enters the Atlantic Ocean. The fishing boats line the northern bank of the river ready to go out each day. Across from them on the southern bank lives a colony of South American sea lions. Though they might sometimes eat scraps from the fishermen and catch fish in the river, they also go out into the ocean to hunt. However, for now evening is coming and it is time for all to rest 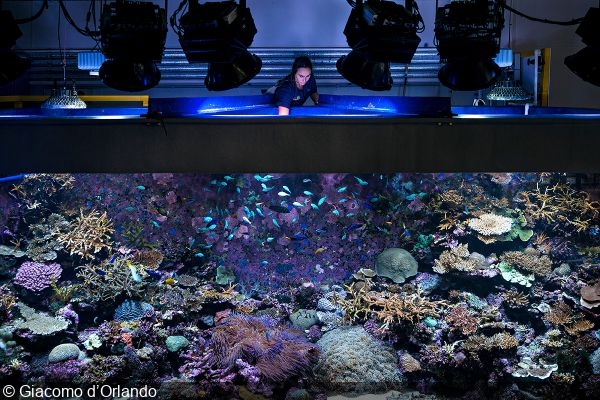 Adriana Campili, marine biology researcher, checks the status of the Reef Aquarium inside the laboratory of the Australian Institute of Marine Science. The AIMS is the most specialized authority in charge of monitoring conditions on the Great Barrier Reef. Inside its Sea Simulator the most state-of-the-art experiments are carried out on corals, aiming to secure a future for our reefs. In this image, I wanted to depict the close connection between human beings and the marine ecosystem, underlining the importance of this natural bond. Location: Townsville, Australia 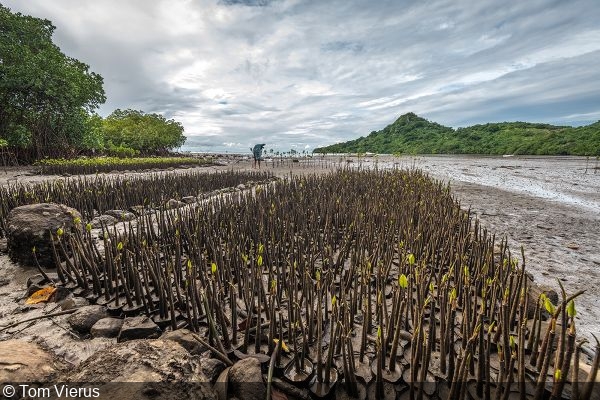 Hundreds of mangrove seedlings grow in a small bay of an island south of Fiji’s main island Viti Levu as part of an initiative by the Fijian government aimed at mangrove reforestation initiatives around the entire country. The project encourages coastal communities to grow mangrove seedlings, which are bought by the government at a guaranteed price and transported to various reforestation locations throughout Fiji 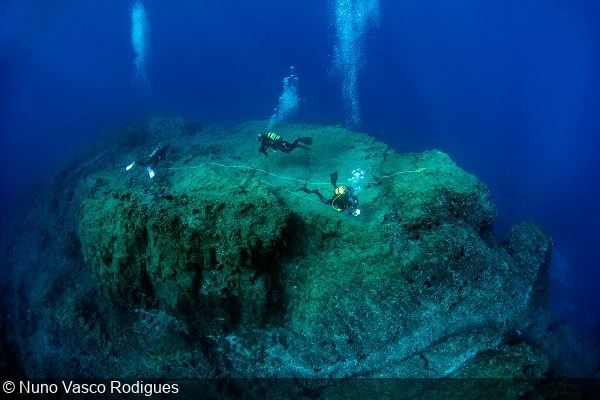 A team of scientific divers assesses the marine biodiversity on the top of a seamount in Porto Santo, Madeira, Portugal. Marine protected areas have been established in the region and local scientists do regular monitoring surveys in order to understand the impact of protection 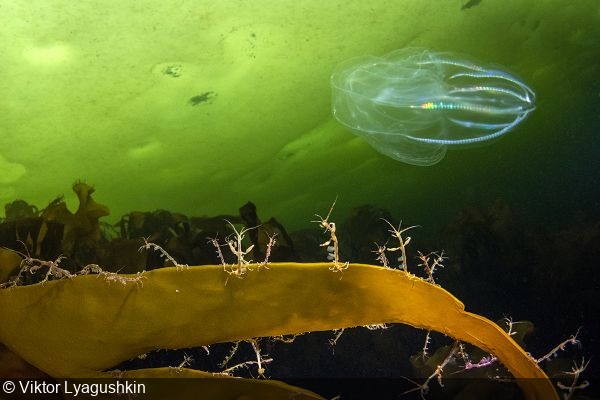 “Aliens Meet Spaceship”: Caprellas, also known as skeleton shrimps, are very funny and tiny animals: They grow to a maximum of 6cm long. They are very social and active, eating non-stop and fighting with each other. The “spaceship” is a Bolinopsis infundibulum, the common northern comb jelly. Bolinopsis doesn’t sting but is carnivorous and eats everything it catches, even other comb jellies. In this image it is floating under the ice 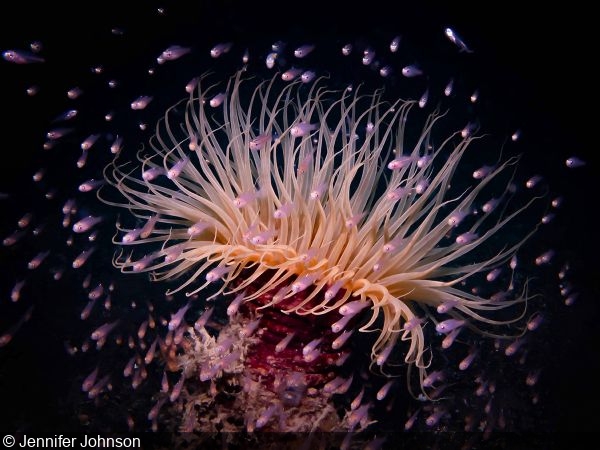 A school of fish hovering around a tube-dwelling anemone, Lembeh Strait, Sulawesi, Indonesia. This tube anemone is a member of the Cerianthidae family. They typically eat small invertebrates and it poses no threat to the hovering school of fish presenting me with this beautifully ethereal underwater scene 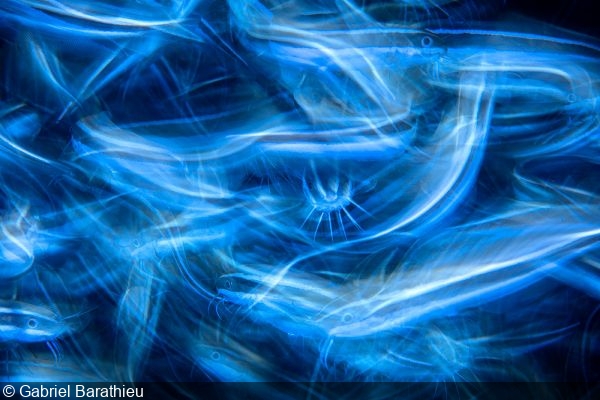 A school of catfish photographed at Mayotte Island using a long exposure with flash triggering in strobe mode (five triggers during exposure time). This technique gives relief and movement to a photo which freezes a moment in nature 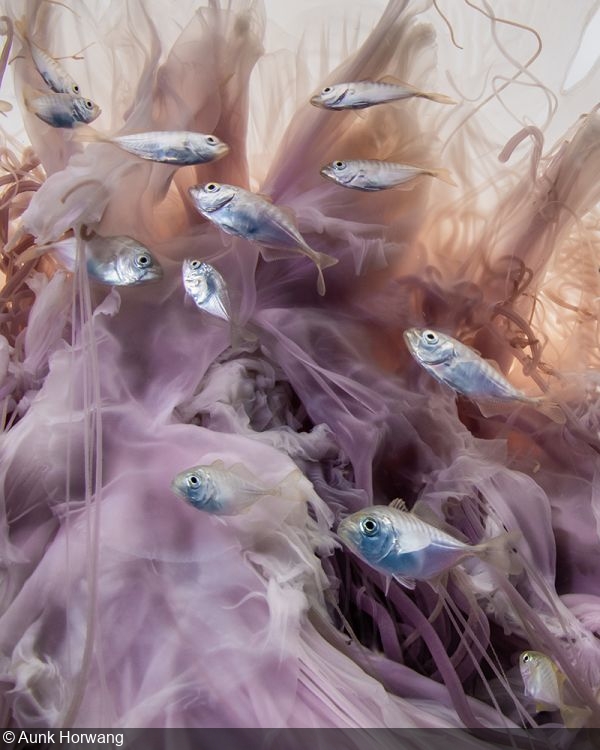