Alex Kirkbride's London Exhibition at Plus One Gallery
By Jason Heller, December 4, 2007 @ 02:00 AM (EST)
Underwater photographer Alex Kirkbride's exhibition associated with his new book "American Waters" opens to the public on Dec 5th at Plus One Gallery, London. The exhibition will be on display through Jan 5th, with a private opening on Dec 4th. Featuring images from all fifty American states, Kirkbride's pictures are a truly memorable, original exploration of the element. 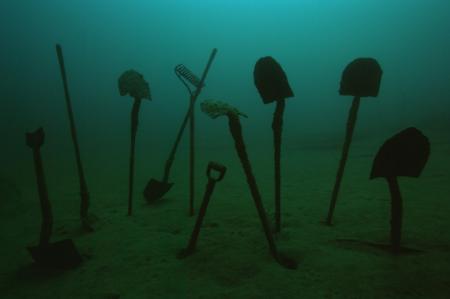 In 2002 Alex and his partner and producer, Hazel Todd, set out on an incredible three-year journey covering 108,000 miles while living together in an Airstream trailer. Entering the water 945 times, Kirkbride took on the enormous challenge to "capture images expressive of American water from coast to coast" and without a doubt, succeeded. Treating all bodies of water with equal importance, from a New York City puddle to the country's rivers, lakes and coastal water, Alex chose to keep his definition of 'American Waters' open-ended and unconfined.

Jean-Michel Cousteau wrote in his forward to the accompanying book 'American Waters'," Alex has pushed us to appreciate all water on Earth, no matter how simple or small. He shows us grandeur in the easily overlooked."

With a technical ability that had been honed over 25 years and a boundless creative approach, Alex photographed not only aquatic life, but also man-made features: from the discarded spades and forks of the Civilian Corps in Montana to the cranberry bogs of Massachusetts to the steps of Elvis's swimming pool in Tennessee. What makes some of the images unique is how they defy all visual expectation by their often ambiguous size and context. A crashing wave hitting the surface alludes to a foreboding thunderous sky while his images of algae could almost be the landscape to another universe.

Often beautiful, at times haunting and unquestionably captivating, Alex Kirkbride's diverse yet united body of work is a celebration of the infinite world of 'American Waters'.

Alex Kirkbride is an award-winning photographer whose work has been exhibited in England, Italy and the United States. He has been published in the most respected photographic journals, including: National Geographic, Vogue (American and Italian), Architectural Digest, New York Times, Travel and Leisure and British Journal of Photography. He lives with his wife Hazel in Hove, East Sussex. Visit his website.