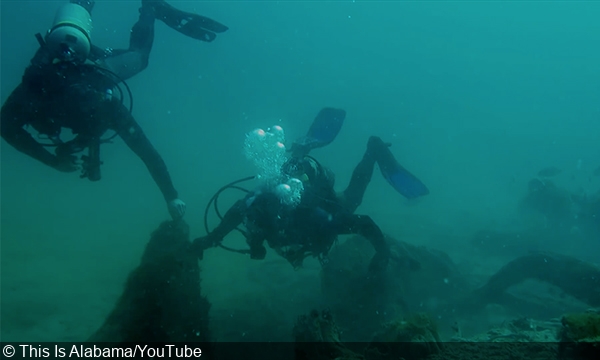 Just off the coast of Alabama lies a unique relic of Earth’s past: an ice age cypress forest at a depth of around 60 feet. Discovered by a local diver in 2012, the submerged forest has quickly garnered interest from scientists—as well as firms that want to salvage the tree stumps for commercial use. Last year, a furniture company attempted to apply for a permit to exploit the site.

Samples taken from the area have been dated to about 60,000 years ago, when temperatures were much cooler and sea levels were much lower than they are today. Scientists think the trees were buried under layers of mud during a subsequent period of rapid sea level rise, protecting the trees from decomposition. Further, it is believed that the forest would still be hidden were it not for the powerful 100-foot waves generated by Hurricane Ivan in 2004 that stripped away the sediment.

Unlike the barren sandy expanses that characterize the Gulf of Mexico, the ancient trunks of cypress trees are teeming with life, and researchers and environmentalists aim to keep it that way. In October 2020, Bradley Byrne, a Republican representative from Alabama, put forward a proposal to create a national marine sanctuary that encompasses the site. “The underwater forest is another unique Alabama gem with global importance,” said Byrne when he introduced the bill in Congress. “As the only known site where a coastal ice age forest this old has been preserved in place, we must take action now to protect it.”

Byrne left office this month before his underwater forest bill could be passed by Congress, but given the environmental priorities of the newly elected President, Joe Biden, it seems likely that this one-of-a-kind arboreal seascape will indeed be protected from damaging activities such as logging and peat harvesting—instead allowing divers and marine scientists to carefully study its secrets.

To find out more about Alabama’s fascinating subsea cypress forest, check out the documentary The Underwater Forest by environmental journalist Ben Raines, below.