Africa's Shark Photography Paradise Under Threat
By Jason Heller, February 18, 2008 @ 03:00 AM (EST)
by Thomas Peschak
Less than 2 weeks after returning from a trip to photograph tiger sharks at the Aliwal Shoal Marine Protected Area off South Africa's east coast I received some devastating news. A few days ago a fishermen who should know better caught and killed three tiger sharks within the MPA and landed them brazenly in broad daylight. Tiger sharks are a protected species within the confines of the Aliwal MPA as they are the main attraction for thousands of tourists who come from across the world to dive with and photograph these sharks. One dead tiger shark might fetch a once off payment of no more than $50-100 dollars for the fisherman, but alive that same shark might be worth in excess of $10, 000 every year in marine eco-tourism. Further investigations revealed the sobering news that five more tiger sharks were killed the week before. 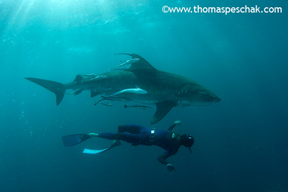 Shark diving tourism at Aliwal shoal is one way to utilize our ocean resources in a non-consumptive sustainable manner and in the process also create much needed employment for hundreds of people in the tourism and hospitality industry along this semi-impoverished section of coast. As this recent incident has amply demonstrated marine law enforcement at the Aliwal Shoal MPA is practically non-existent and poachers are able to operate with impunity from arrest or prosecution. If the sharks of Aliwal shoal are to remain a model of non-consumptive utilization of South Africa's marine wildlife heritage then the government, NGO's and tourism operators must combine forces and act quickly to stamp out these reckless, selfish and destructive acts that could destroy one of the world's true last shark paradises in just a matter of months. 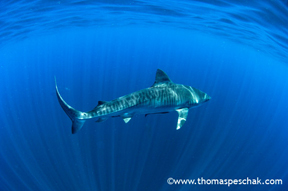 In a perverse twist of fate a shark diving operator who plans to use it as bait to attract tiger sharks for his international diving clients has purchased one of the dismembered shark carcasses. Granted tiger sharks frequently feed on other sharks, but to me purchasing the meat of an illegally caught tiger shark as bait to attract more tiger shark for eco-tourism purpose is nothing short insane.
The Aliwal shoal marine protected areas is one of the best localities in the world to photograph tiger sharks and has hosted underwater photographers as diverse and renowned as Doug Perrine and David Doubilet.
For more information and updates on the situation please visit Tom's website.
Cape Times story on the Tiger Shark killings.