Editor's Note: The following was posted today on the website of Ocean Conservancy regarding the Shark Conservation Act of 2008, passed today by the US Congress. This is a step in the right direction.

Today, the House Natural Resources Committee approved the "Shark Conservation Act of 2008." H.R. 5741, offered by Chairwoman Madeleine Bordallo (D-Guam), aims to end shark "finning" - the wasteful practice of slicing off a shark’s valuable fins and discarding the body at sea. Ocean Conservancy strongly supported the original bill and an amendment 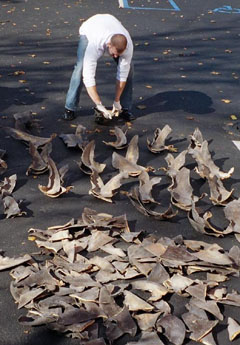 to prohibit the removal of shark fins at sea which was introduced today by Congressman Faleomavaega (D-American Samoa) and approved by the Committee.

The Act would strengthen the U.S. finning ban by closing enforcement loopholes, encouraging other countries to adopt shark conservation programs, and establishing a process that would ultimately allow for sanctions against countries that do not. The prohibition on the removal of shark fins at sea, added through the amendment, is the most reliable means of ensuring a finning ban accomplishes the intended goal. A "fins-attached" strategy is also key to helping scientists and enforcement agents determine the species of sharks retained in fisheries, data that are essential for assessing populations and enforcing species-specific protections.

"The changes proposed in H.R. 5741 are necessary to ensure proper enforcement of our national finning ban and to bolster U.S. efforts to promote international shark conservation," said Sonja Fordham, Shark Conservation Program Director for Ocean Conservancy. "Because the demand for shark fins is strong, an incentive to fin sharks remains. In most other countries and in international waters, finning bans serve as sharks’ only safeguards. Most shark populations are in decline; many are threatened with extinction. All of these factors make proper enforcement of existing finning bans and encouragement of international conservation measures imperative. We thank Chairwoman Bordallo and Congressman Faleomaveaga for their leadership in this important initiative to improve the status of these valuable yet vulnerable animals."

To learn more about Ocean Conservancy and efforts to help protect our ocean visit www.oceanconservancy.org