Winning images for August's underwater photo contest have been selected.  The winner of the Mating and Spawning themed contest and a new Ikelite DS51 Strobe courtesy of Ikelite is Rand McMeins who caught the magic moment between two fish perfectly. In second  place was Tobias Friedrich with a unique split shot.  Third place went to  David Henshaw for his captivating sea horse mating image.

You can see a complete announcement of the winners and winning images here.

More about the Ikelite DS51 Strobe

The compact, lightweight and affordable Ikelite DS51 Substrobe is an excellent choice for any underwater photographer. Its digital electronics make it fully compatible with digital cameras as well as traditional film cameras such as the Nikonos. 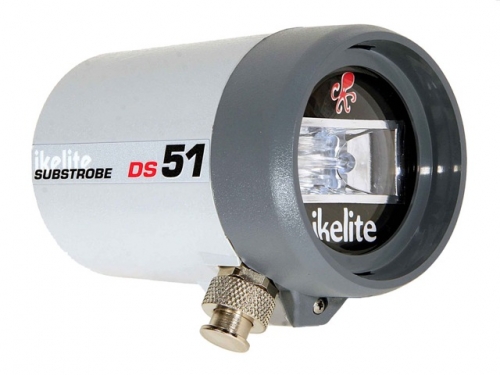 The DS51's intensity and angle of coverage make it equally suited for macro and general photography. The strobe's wide-angle diffuser increases the angle-of-coverage up to 80 degrees, softens the light and helps to reduce backscatter. The strobe can easily switch between TTL/Auto and any of the six (6) manual power settings for complete control over lighting the subject. The DS51 Substrobe's power rivals strobes twice its size, recycles in a quick 3.5 seconds, and provides 200+ flashes on a set of batteries. Much shorter recycle times and more flashes per set of batteries can be realized during TTL operation or when using manual fractional powers.

When connected with a sync cord to Ikelite TTL housings, TTL adapters, or the Nikonos camera system, the DS51 Substrobe offers TTL and Manual Modes. When used with other manufacturers housings, the DS51 Substrobe can only be used in the Manual Mode utilizing the six selectable power settings. When used in conjunction with the EV-Controller, the DS51 Mode switch is set to the TTL setting and the EV-Controller provides ten power settings in half-stop increments.