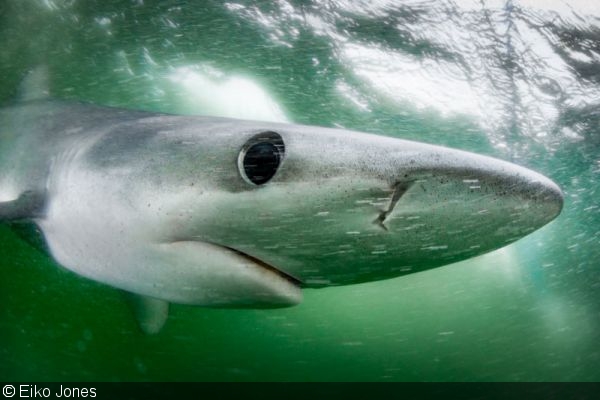 In the summer months, the Kuroshio Current pushes warm water into the offshore areas of the coast of British Columbia. The continental shelf comes to within 10 miles of the coastline of northern Vancouver Island, and it is here that we ventured out on several offshore trips in 2016. These extreme dive trips were catering to groups of adventurous divers looking for something a bit out of the ordinary.

Far offshore in water thousands of feet deep, we went in search of blue sharks and other pelagic species such as Mola mola (aka ocean sunfish) which ride in on the warm currents in search of food. Occurring regularly, but seldom seen by divers due to the location, these creatures are fascinating to see and swim with. 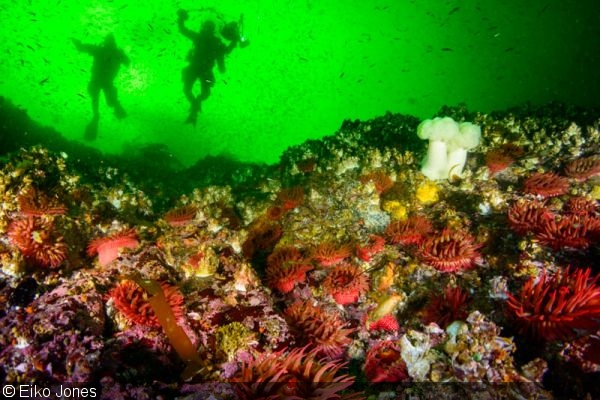 On each of the trips last year, the blue sharks eluded us, as they had left the area the month before following the food, but we encountered molas a few times. One was so big that at first sighting, I thought it was a dead whale floating at the surface, as it was lying flat in the sun. We estimated this one to be seven to eight feet tall, and a couple of thousand pounds. This monster of the open water only stuck around for a few minutes as some divers jumped in the water with it—its huge dorsal fin sticking out of the surface waved back and forth as it cruised effortlessly away from us.

On another day, we were more prepared. Whilst traveling to an offshore Island, we spotted another mola and carefully slid into the water with this smaller but still hulking fish. With some people guiding us from the boat, we managed to spend several minutes swimming alongside and photographing this amazing animal. 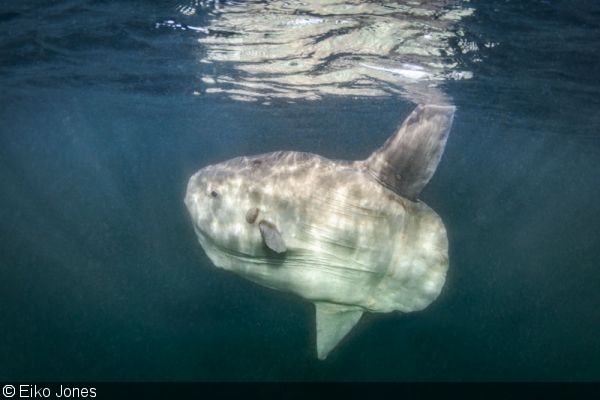 A Mola mola, aka the giant sunfish, just off the coast near Winter Harbour, Vancouver Island

On another trip out of Tahsis, on Vancouver Island’s west coast, we were floating around in 5,000 feet of water off the shelf and were visited by half a dozen black-footed albatross. They were sitting in the water around us, picking at the bits of chum that came out of the bag, and likely wondering what the heck we were doing in their territory. It was quite comical watching these huge birds riding the waves and lumbering into the air—definitely not your typical encounter when in the water. 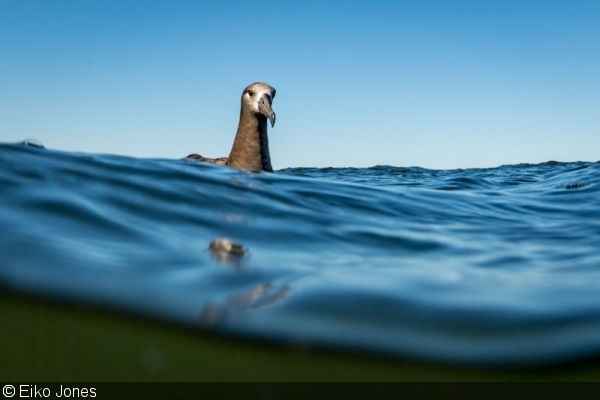 The outer west coast of Vancouver Island is not very frequently dived, as weather and lack of facilities make it difficult. But the rewards are worth the extra effort and cost. Staging out of Winter Harbour enabled us to reach incredible areas of untouched coastline and offshore reefs and pinnacles. After a few hours spent out over the continental shelf, we would hit a rugged rock pinnacle for a deep dive. These sites were some of the best cold water diving I have ever experienced.

The rugged volcanic rock was tortured with crevices and overhangs, and everywhere one looked there were fish. I felt like I was swimming in an aquarium filled with rockfish. I remember the first site like this, sitting at 130 feet, feeling the effects of narcosis, and everywhere I turned was another species of mature rockfish. I would take a photo with five species in it, turn the camera 90 degrees and there would be three more species entering the frame. This was to be repeated several times during our Winter Harbour trips. One photo I managed to get has six species positively identified, and possibly a seventh. 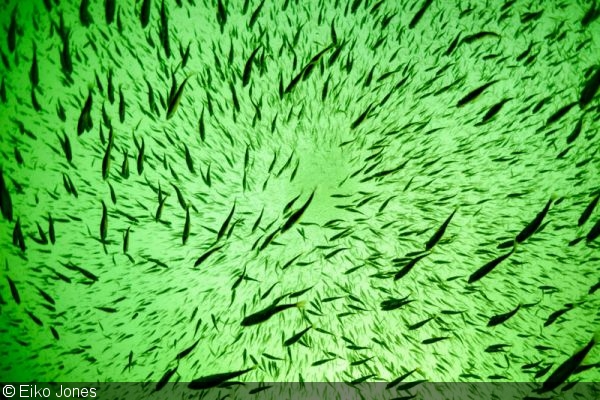 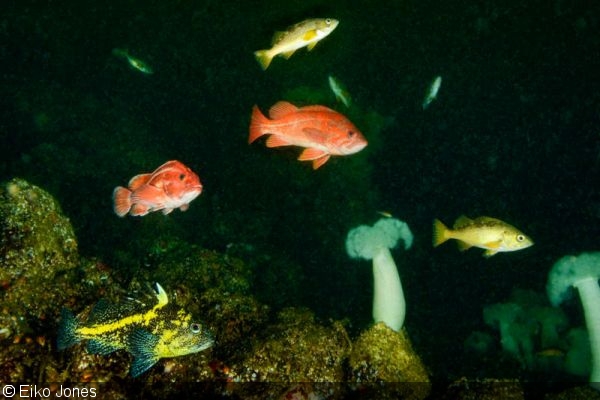 Depending on conditions, pelagic dives are mostly at the surface.

Shooting without strobes allows for more freedom of movement and a better chance of capturing the action. Getting in and out of the boat quickly and easily is important, so the lighter and smaller your camera gear, the better.

You’ll need a wide-angle lens to get the sharks and Mola mola in the frame, as well as to capture fish schools and reef scenes. Macro shooting is very difficult because of the strong surge conditions.

While ascending on that first pinnacle dive, I was further shocked when I got to the top of the rock, and was confronted with a site I was not ever expecting. Amid the stand of kelp were thousands of juvenile Bocaccio rockfish swirling around me as I swam up. It is always a treat to see a species for the first time underwater, but especially so when it is a fish that is on the endangered species list. I had never heard of anyone seeing them before underwater, and I was astounded by how many there were. These fish are one of the larger rockfish species, the adults living at depths generally deeper than divers go. But like most rockfish, they spend some of their early life in shallow waters. Low on air, I sadly had to pass through them without being able to really dial in my camera. I got a few shots and knew I would be back for more if I could.

This last year saw an incredible event happening up and down the entire west coast: Rockfish give birth to live young (called recruitment) and 2016 was a record year. There have been more juvenile rockfish seen than people can remember in the past. This has excited and intrigued fisheries people and divers alike. The trips we did out of Tahsis and Winter Harbour put us right in the thick of this recruitment. On every dive we did on the reefs along the outer coast, there were literally millions of small fish everywhere one looked. Juveniles of yellowtail, black, deacon, widow and canary rockfish were the most predominant. Hopefully this is a sign of some good rockfish numbers in the future. Many species have been in decline due to overfishing so this amazingly fruitful recruitment year is certainly welcome.

Calm Before the Storm

There is a part of the coast of Vancouver Island that is infamous for boaters. Brooks Peninsular juts out near the northern end of the island, and a couple of miles off the tip lies Solander Island. The weather station atop this dramatic volcanic protrusion reportedly records more days of hurricane force winds than any other weather station in Canada. Many boats—and unfortunately lives—have been lost here over the years.

On the first trip we did, there were several sailors aboard who had been past here before and we all dreamed of diving Solander. On one lucky day, the swell was down and with a rare forecast of northeasterly winds, we set off in high hopes of circumnavigating the island. As we neared the tip of Brooks, we started to get excited as it looked like we would be able to even dive here. Sheltered from the worst of the offshore swell, we were able to get in the water on the south side of Solander and had one of the most memorable dives of our lives. 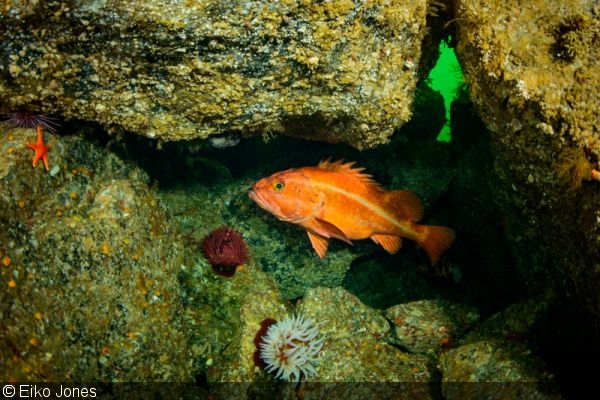 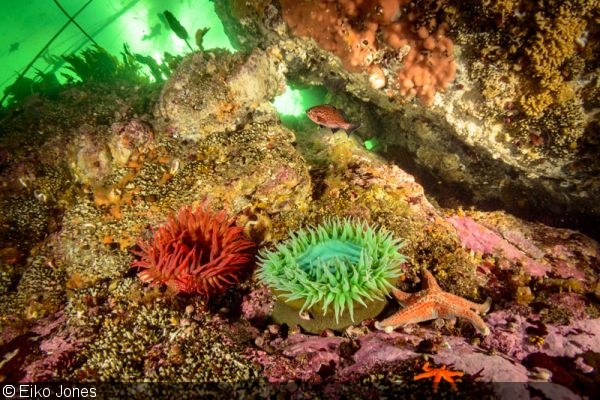 The ruggedness of the rock combined with the relentless storm swells made the underwater topography like something I had never seen. All the life was wedged down in crevices and cracks between the rock. There was so much action and movement, even on this “calm” day, that it was amazing to think anything could hang on through the endless storms that lash this location. We left here knowing we did a dive that not many people have ever done—and the likelihood of coming back was slim.

Planning Your Trip to Vancouver Island

When to Go: The best time to go is between July and early September

How to Get There: Trips operate out of Winter Harbour, Tahsis, and Bamfield on Vancouver Island. Ferries to the island leave from Tsawwassen and Horseshoe Bay, near Vancouver

Who to Dive With: Adventure Diving operates small excursions focused on locations not typically serviced by other operators

What Dive Gear to Bring: Drysuit, good quality scuba gear—there is nowhere to get spares

What Photo Gear to Bring: Wide-angle lens; for shooting pelagics offshore, strobes aren’t necessary but can be used

An approaching storm in Quatsino Sound: The weather and scenery above water is matched by the dramatic conditions below

Yan Jin Lee wrote:
Incredible !
You must be logged in to comment.
Support Our Sponsors
Advertise With Us
Newsletter
Travel with us