The setting was the Madeira Archipelago, a group of Portuguese islands in the Atlantic, just off Europe’s southwest shores. This event happened in 2001, back when everybody was still amazed that state-of-the-art digital cameras could do a remarkable 2.7 mega pixels.

I had known for some time that there was a colony of one of the rarest animals on Earth,the Mediterranean monk seal, in the aptly-named “Desertas,” a small group of deserted islands near the main island of Madeira.

Although it is a mere two-hour boat trip from the main island where almost a million people toil and frolic every day, there is close to zero human pressure on the place The seals are fully protected and anyone wishing to visit the island must first be cleared by the Portuguese authorities. National Geographic Magazine Portugal had shown interest in the conservation efforts in place for the seals and so there I was, armed with two cameras (one F5 and one RS), lots of strobes and loads of film. 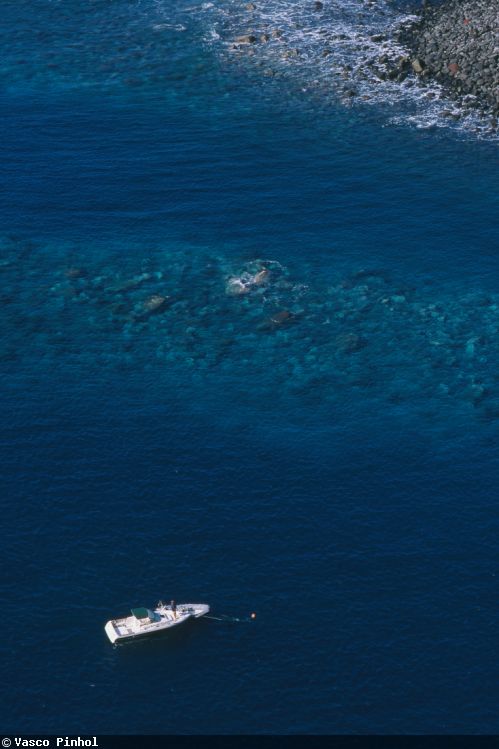 The Mediterranean monk seal is one of those animals that has suffered exquisitely immensely for being just too plain nice. In the old days, the seal was quite common on the coasts of the main island and several well-known beaches are still named after the animals.

However, the seal is now rare due to them being hunted for making oil, jackets and purses. They are fast and elegant in the water,but, as with all other pinnipeds, when on shore, they are as gracious as a slug. They were, therefore, an easily exploitable resource for the Portuguese island inhabitants who, in typical human fashion, killed off the seal population to near extinction.

The concept of extinction is a modern one. People used to think that the sea was an unlimited resource and that if you couldn’t see the animals anymore it was because they had moved elsewhere.

The mindless exploitation of a friendly species isn’t a strictly Portuguese skill. The Mediterranean monk seal was eradicated from all territories in which they previously thrived. First, it disappeared from its namsake, the Mediterranean Sea. Then they vanished from the Atlantic coasts of Africa due to hunting and diseases. Finally, it was nearly ready to go the way of the Dodo. The colony I was visiting, possibly the largest in the world and definitely the only protected one, had just 22 animals at the time.

So there I was, happy as a twit, together with my two partners, Artur Silva and Francisco Albuquerque. The park rangers knew these two quite well, since they both are from Madeira’s main island, which is a landform not much bigger than a large ship. They didn't know me, however, and so they suspiciously observed the slightly obsessive way I handled these very professional-looking cameras.

The rangers had just gotten rid of another nutcase who also obsessively handled professional-looking cameras. You see, the park has other interesting species besides sea life. They had just seen out a photographer from an unnamed international nature magazine that was keen on photographing the large, unfriendly looking endemic tarantula. This photographer had recently spent a full week scaring the wits out of the cook by keeping tarantulas half-alive in the fridge. (He told them that spiders, being arthropods, react to cold by becoming inactive, perfect for his photographic plans). 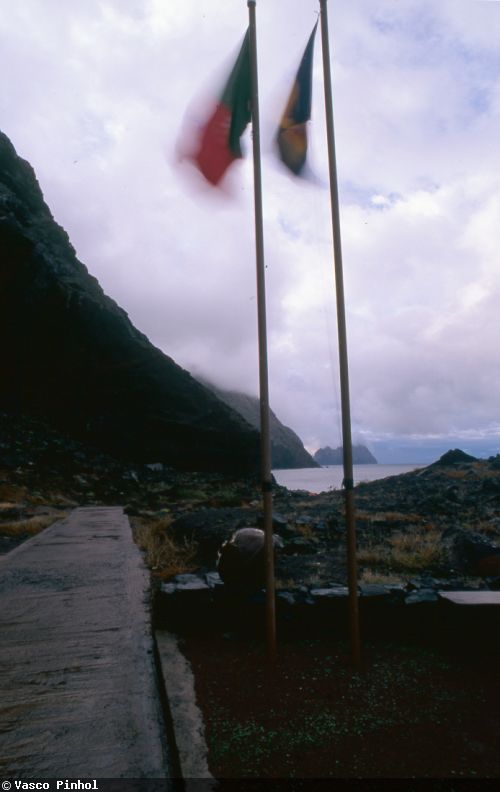 The life of a Desertas park ranger is quite interesting. First there is the limited useable island area, which is roughly the size of a softball field. Then there is the actual nature of their work.  Take one of their tasks, counting the seals, as an example of the not so normal tasks they are put in charge of. This ranger duty involves being taken by dinghy to a tiny beach and sitting there all day waiting for something to happen.

Picture a beach the width of a large kitchen table with a live 300-foot-high rocky wall hovering straight above it. Seal counting must be done with a helmet and a keen ear. The happy sitter has to cautiously listen for the sound of erosion (a loud cracking followed by a rainfall of rocks, some large enough to crush an elephant), and he must be quick enough to swim out to sea the moment he hears it.

This erosion process, which has gone on forever and will continue to, comes in many magnitudes and can be quite deadly. One of the rangers decided it would be cool to tell us about the night he heard a big bang, and only had time to run out of the cabin and into the sea before a large section of the wall above collapsed and rolled into his cabin, crushing it. This anecdote marked the end our sound sleep. Thereafter, we slept like dolphins -- with half our brains always awake.

Contrary to popular belief, going on photographic expeditions in search of rare and elusive animals is an endeavor more likely to bore the wits out of you than to be really exciting. You’d be hard pressed to find a more tedious activity. In fact, it’s similar to watching grass grow. 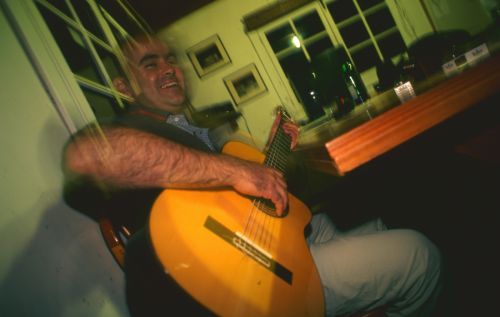 On this expedition I spent days waiting in the water, watching my hands develop prune-like grooves. My fellow photographers, being brighter and less optimistic than I am, were waiting in the boat in long afternoon dazes. They correctly assumed that seals, being mammals, have to come up for air and that this being a naturally quiet environment, you're bound to hear them.

But that was just not good enough for me. I spent unending hours bobbing up and down, trying to touch the dark sandy bottom (one has to fill the time with something). All the while, interesting creatures paraded in front of my nose. I saw a blue shark, elegantly swimming in a perfect circle against the sun. I saw schools of bright, joyful fish playing in supremely photographable formations. I saw all shapes and forms of small and big creatures frolicking about for my photographic enjoyment. But I could not photograph them because, remember, there is no “Delete” button on a film camera. If I was lucky, I had 38 shots if the seals did come by. After each roll of film was used I would have to climb back on the boat, take off the top of my suit, dry myself enough to stop dripping, open the camera and change the film. Then reverse all these complicated operations in a very precise and exact way to get back in the water to shoot another roll. 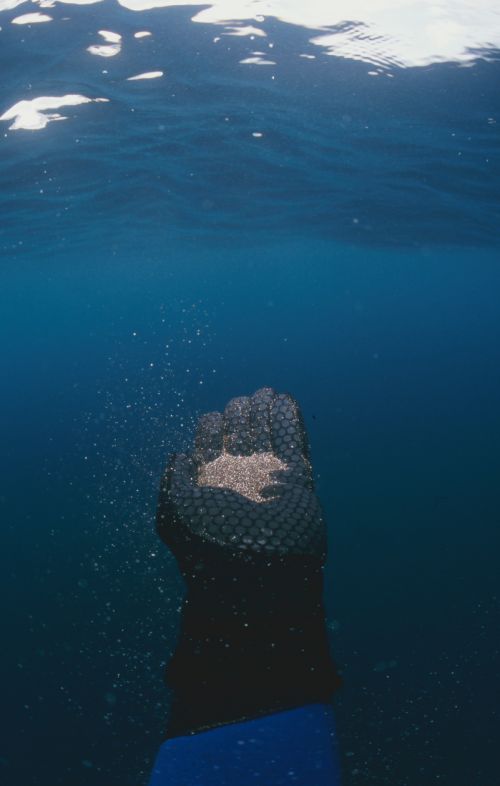 In the late afternoon of the third day, when everybody was so sedated I could hear a disheartening snoring coming from the boat, I suddenly saw a gray shadow coming toward me. It was a female Mediterranean monk seal, about my size but delicate looking. It was simply beautiful. 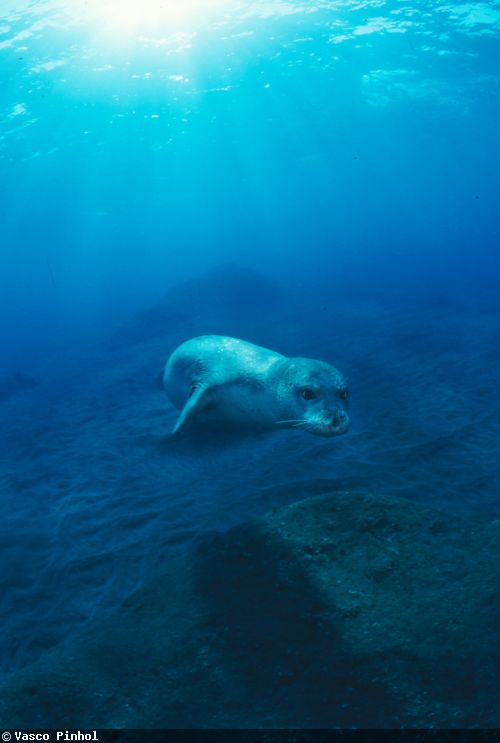 I had on a black and blue semi-dry suit, and my tuft of white hair probably made me look like a silly seal. Naturally she started to flirt with me. I am quite sure she thought I was seriously ill, because I had to surface for breaths so often. But that didn't stop her from posing quite charmingly for several lucky shots. After a while, two other much bigger animals approached, including two fierce looking males. One went straight for the lady, the other went straight for me. 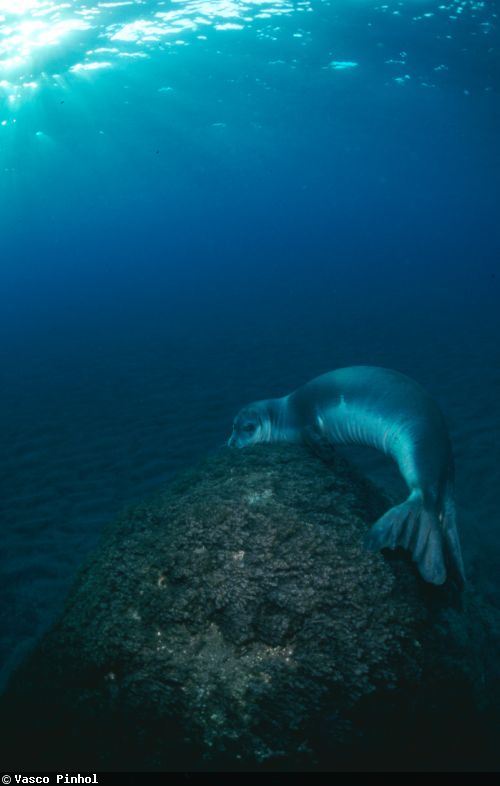 The pair started to mate at the bottom of the sea, and I managed to get some more lucky shots. 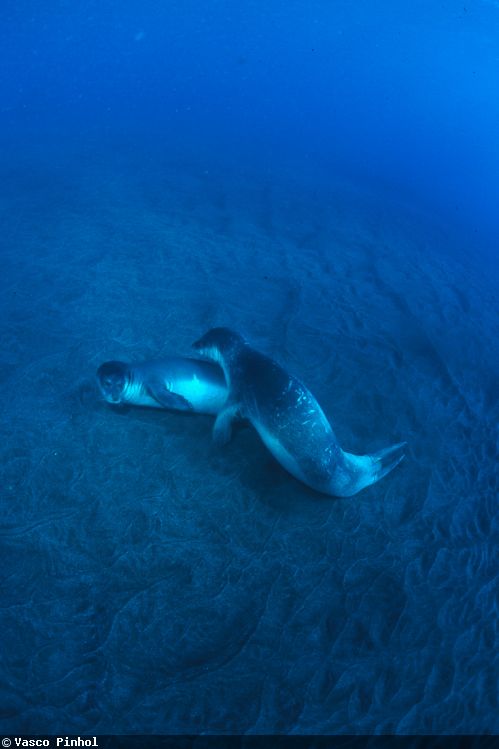 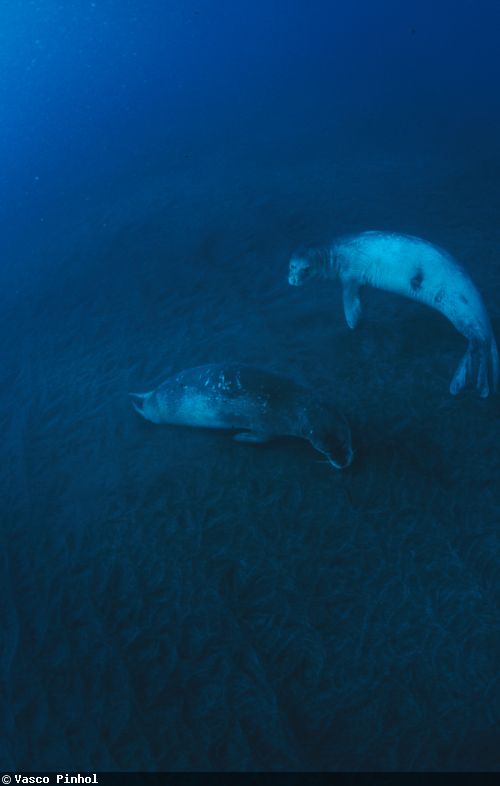 The big male decided to have a go at the first intruder again and came straight for my camera, hitting it with his muzzle. He backed off, surprised by the hardness of the dome, and came again with an open mouth. I thought “no, not the camera again, no!” So, I raised my arm and lowered the camera and he happily bit me. It all happened faster than the blink of an eye. I was happy to find out later that it was not faster than my crazed shutter finger, so I had everything recorded, even the first muzzle hit. I had, unknowingly, finished the film. 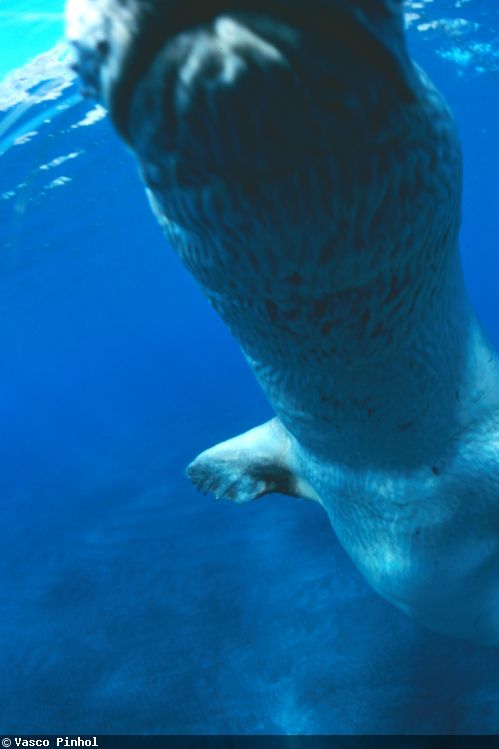 The animal backed off after he had clearly delivered his message to me.  I think message went something like: "I could have ripped your arm off but didn’t, and if you don't want me to bring the wrath of my ancestors upon you, get in the boat and go home!” 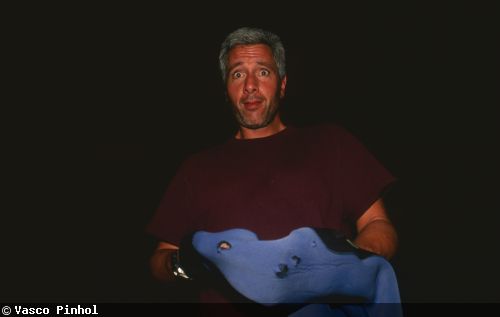 The author, Vasco Pinhol, with his torn up wetsuit

After realizing "oops, no more frames," I did indeed swim back to the boat. It was only after I climbed aboard that I realized I was dripping blood. My left arm had teeth marks as wide as a lion’s jaw, but fortunately not deep enough to need immediate help. So I changed the film, taking care not to drip blood into the camera (it’s funny how silly one can be on an adrenaline high). I jumped right in again to join my dive partners, who had been woken up by all fuss, and my newly acquired “friend.”

Time is a relative concept that can stretch to oblivion when you’re bored out of your socks and compress to the size of an aspirin when you’re in an adrenaline jungle.  All of the second film I shot was done in what seemed like two seconds. But it was later revealed that in that time I took photos of the seal couple mating, got shots of the unfriendly male on the surface, took more photos of the couple in the sandy bottom, unwittingly took photos of myself looking rather wide-eyed, and finally took photos of my fins against a background of a very large open jaw. This was the big male's way of saying “get out of here NOW or you’re mine,” while chasing me all the way to the boat. I have no recollection of climbing up. I assume I probably jumped into the boat in one go, like a spastic dolphin. 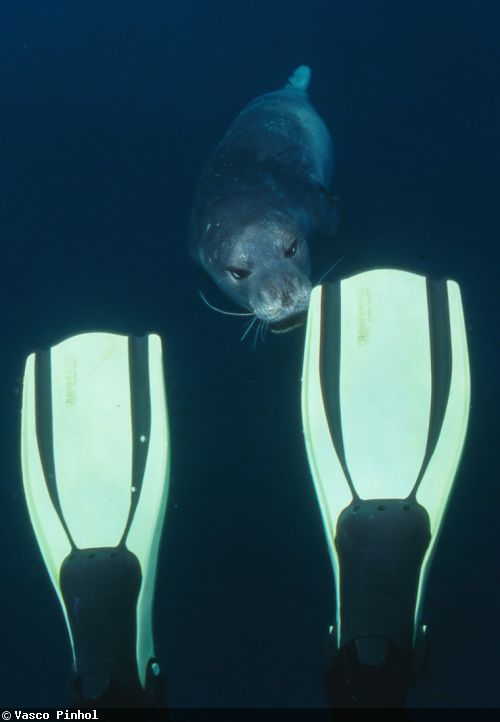 In a nutshell, here’s what I learned:
•    The fact that a species is threatened doesn’t mean it will not be threatening.
•    It is better to be bored in the water than snoring in a boat.
•    Keeping large spiders inside fridges affects cooking capabilities.
•    We are the ugliest, most unseemly animal ever to roam the oceans, sea slugs included.
•    Just because there’s a roof above your head doesn’t mean that a large piece of mountain will not rain on you.
•    We can only love what we know, and we can only protect what we love.
•    Mediterranean monk seals are unbelievably extraordinary animals and all efforts to save them should be implemented.

I wonder how many of today's generation of photographers remember film.

Tiago Berg wrote:
Your seals pics are attracted
You must be logged in to comment.
Support Our Sponsors
Advertise With Us
Newsletter
Travel with us