By Jeremy and Amanda Cuff

Diving trips, and especially liveaboards, are normally the preserve of the “grown ups,” but in the Cayman Islands we took our six year old son Zac on a unique family liveaboard week. I was producing a feature for Sport Diver magazine in the UK and wanted to capture the entire experience from what was Zac’s first time on a dive boat. Of particular importance was capturing his first experiences in the water breathing from a tank. In addition, I still needed to bag a good set of images from the dive sites. It gave the trip a different and enjoyable slant…

Anyone with a young child (or children) will know that if you want to maintain interests such as diving, it’s not easy. You’ve really got to want to do it, and find a way to incorporate it into an already busy and hectic life. As we’ve always wanted to keep doing it, our way has been to enlist the help of grandparents (usually Grandma) so that we can go away for a week or so, or get her to travel with us to longer haul destinations.

This has been great up to a point, but it hasn’t really allowed our son Zac into our “other life” of diving other than showing him images from our trips, looking at fish books and watching “Finding Nemo”. That is, until we discovered the family week liveaboards run by the Aggressor Fleet in the Caribbean.

As a regular contributor to Sport Diver magazine in the UK, I proposed a feature that majored on the “family week” aspect rather than “just the diving”. Photographically, it meant capturing good topside and underwater images that told the “story in pictures”, and ensuring that they related well with the words themselves. 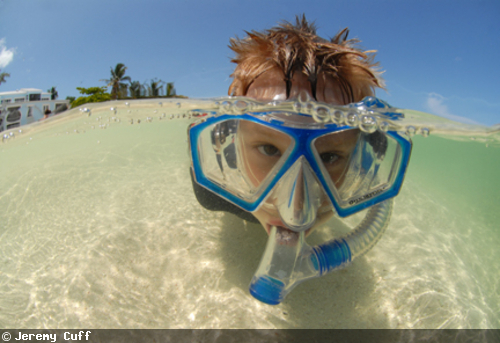 The family week itinerary is based on the normal “grown ups” trip, but with a few subtle tweaks to make it more “child friendly” both onboard and in the water. Basically, you spend the first night and following day off Grand Cayman before making the crossing to the best diving at Little Cayman, where you spend most of the time, plus a visit to Cayman Brac, before heading back to Grand Cayman.

The first activity was a couple of try dives for the “grown ups” at a nice little wreck off Seven Mile Beach called the Doc Polson in lovely turquoise water. It set scene for what would be a great week of excellent diving in near perfect conditions. The Doc Polson was quite photogenic and served as a good place to get back “in the zone” in terms of our underwater communication, as my wife Amanda will model for me when required. The images from these two dives alone were very pleasing, taken using a 10.5mm fisheye. 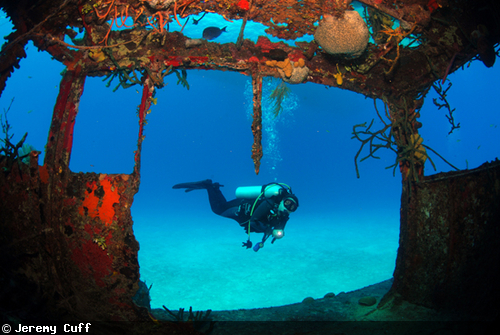 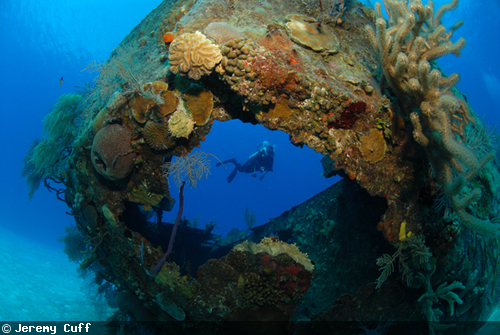 Next, before heading off to Little Cayman was a stop off at the “world famous” Stingray City, a place that doesn’t require explanation. There are actually two places that are called Stingray City, and we visited the original site, away from the majority of the snorkeling day boats that form a permanent flotilla most days. It’s only in a few meters of water and gives everyone a chance to have a bit of fun with these tame rays, with the crew using some pieces of chopped up squid to keep them interested.

Once all of the divers were in the water, it was Zac’s turn to get in. He snorkeled with one of the crew, legs kicking feverishly over to the melee of divers and rays. Then, Sam (one of the crew) cradled one of the rays and eased it to within reach of Zac. It was a great moment to watch from beneath, and a great photo opportunity which I managed to grasp. He thought it was fantastic. 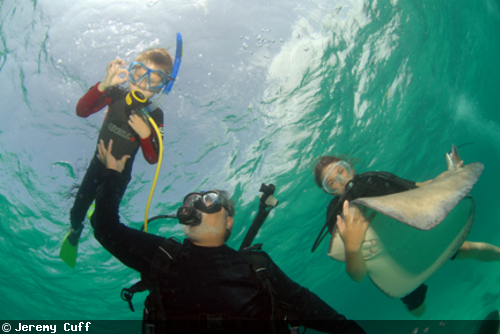 Photographically, Stingray City was actually quite difficult, due to the underwater “chaos” of  numerous random fish looking for a piece of the action, divers and rays everywhere (and not always in aesthetically pleasing positions) and lots of kicked up sand (a recipe for unclear images and the dreaded backscatter). In addition, shallow bright water, the mid day sun and the white undersides of the stingrays meant that overexposure was a constant occupational hazard. To get a really good set of images here, several visits would be helpful.

At Little Cayman, Zac would get his first opportunity to emulate a “real” diver. He would attend the dive briefing and be shown how to kit up, check air and so on. He would then enter the water with a crew member using a SASY (Supplied Air Snorkeling for Youth) setup which is a self contained regulator and tank, but for surface swimming only. With this equipment, a child can thus breathe through a regulator like a diver, check air and view the reefs from above, but without the snorkel filling with water.

It’s a great step towards becoming a diver. We watched Zac perfect his giant stride entry and laughed as he begged Captain Henri to give him some weights. On one of his SASY “dives”, he went with Sam on a “scooter” – a motorized torpedo like device that propels you through the water and he also enjoyed a superb encounter with a grouper and some yellow tailed snapper, helped by a liberal sprinkling of food by the crew. As all this played out, I was clicking away on the dive deck, and once in the water I was always underneath shooting the action with my 10.5mm fisheye, careful to avoid a “whiteout” from the sun. 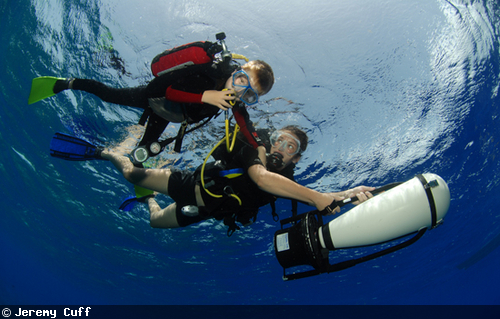 Little Cayman offers the best diving in the Caymans and is a real treat to visit. Most sites are combinations of spectacular walls cut with swim-throughs, fissures and overhangs that are festooned with colorful corals, sea fans and sponges. On the reef tops, such as Meadows (my personal favorite site), there’s a labyrinth of gulleys and ledges to explore, plus some interesting sandy expanses which are home to garden eels, stingrays grubbing for mollusks and jawfish. Other sites visited included Great Wall, Nancy’s Cup of Tea and Randy’s Gazebo, all of which were very good. 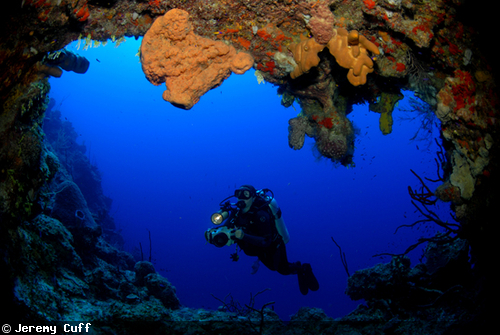 In the open water, especially along the reef edges, you can spot eagle rays and the odd reef shark, and turtles can be found almost anywhere. Barracuda, tarpon and jacks can also be encountered with regularity, and let’s not forget the groupers, many of which seem “tame” or at least curious of divers. Fans of macro photography may also be rewarded with reef squid, octopus, seahorses, flamingo tongues, moray eels and cleaner shrimp, sometimes in the act of cleaning an eel or a grouper. 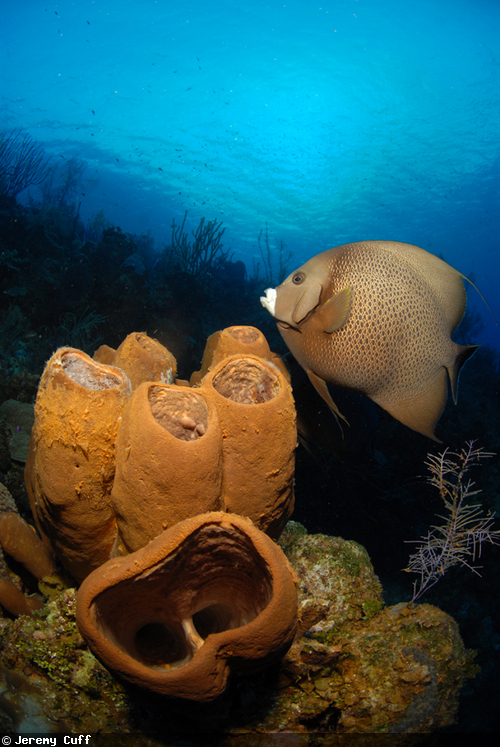 The “tame” groupers are great for photographers, and I certainly spent some serious time capturing these impressive fish. I preferred to show them in context with a diver so that the impression of the size was more striking. 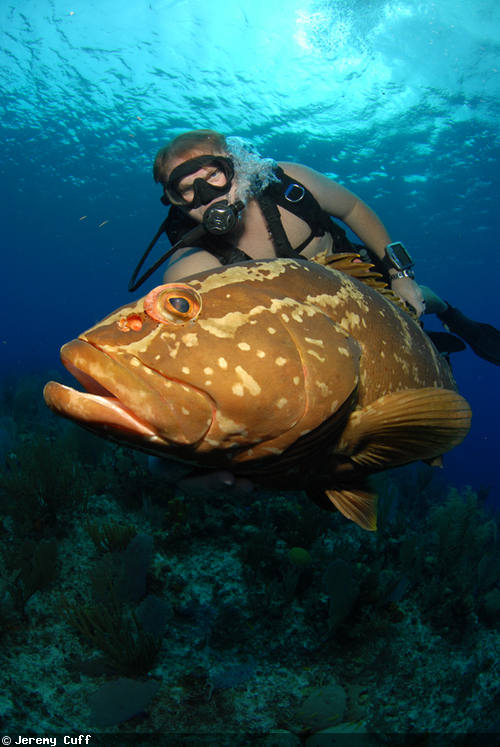 On the walls themselves, there’s some immense photographic potential for wide angle/fish eye photographers – it’s just a case of finding the best spots and working them, tweaking settings, adjusting angles and getting good communication with your model (Amanda in my case). Often I would get her to repeat a pass, using hand signals to suggest an optimum angle of posture and so on. 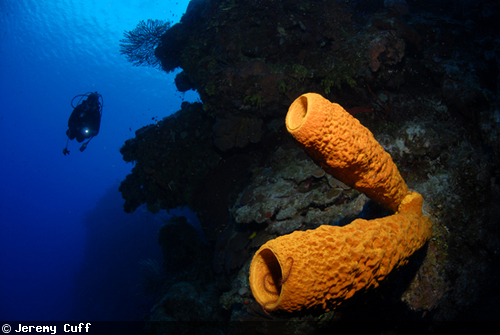 At the Meadows site, I discovered a lone tarpon in a few meters of water fairly close to the boat. This impressive fish would remain virtually motionless unless a diver invaded its “personal space” at which point it would slowly turn and move away. In order to get close enough with the fish eye lens, I really had to slow down and edge forward, hoping that the fish would adopt a photographically pleasing position in relation to the reef. Once within striking distance of the camera, the tarpon’s silver scales are the next problem to overcome, as they’re “hyper-reflective”. Careful strobe positioning and reducing the strobe power was the only answer here to avoid “whiteout” on certain parts of the fish. Here, the reward for my patience was a pleasing image of the tarpon framed within the shape of the boat. 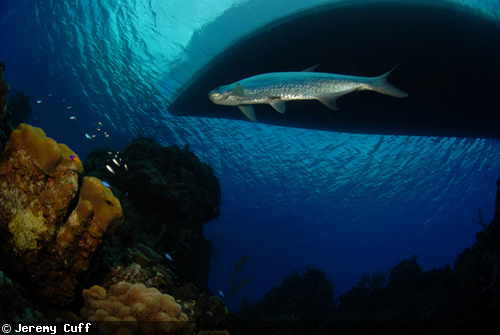 At Cayman Brac, we enjoyed a fine dive on the excellent “Keith Tibbetts” Russian Destroyer wreck that was purchased from Cuba (after lengthy negotiations which involved Aggressor Fleet President Wayne Hasson). It was deliberately sunk as an artificial reef and provides a boost to the local economy by creating a “diving landmark.” I captured some nice images of the wreck with the fish eye lens (sometimes with Amanda modeling) even though several dives here would be the optimum. 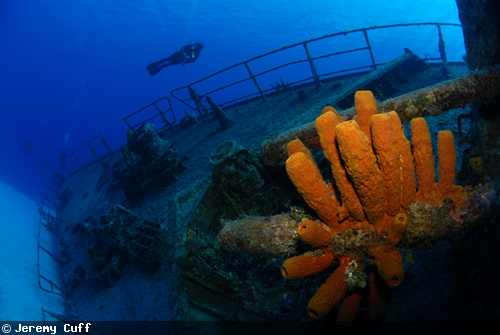 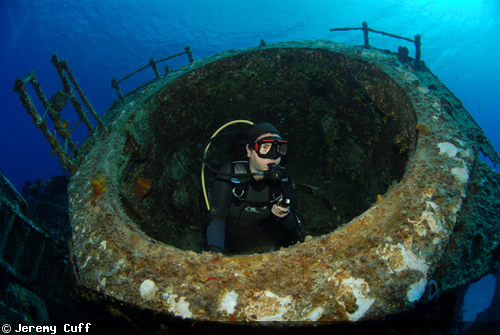 We had an option of a second dive on the wreck, but dragged ourselves away to do an island trip – visiting some caves known for its resident bat population (called the Bat Cave – yes, really), the island museum, and a stop off at the kids playground to feed the iguanas and see the “missing” part of the Keith Tibbetts wreck (the top of the tower) that would have been a hazard to boat traffic had it been left intact. The pictures from this “land excursion” were also good for telling the story of the week, as good dive photojournalism should (I think) always contain decent topside images to accompany those taken underwater.

Back at Grand Cayman, we had time for two more dives before heading into port to pack our gear, including the Cayman favorite Devils Grotto which is known for its resident group of tarpon and countless silversides in season. We then had an enjoyable farewell cocktail and nibbles party on board, and a chance to swap emails, take group photographs and generally wish everyone safe onward journeys. 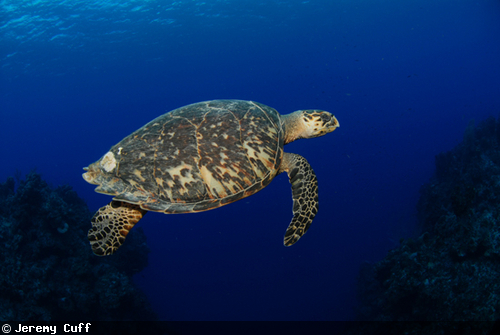 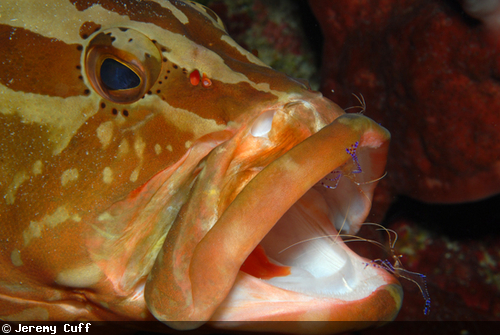 By the end of the week, we’d been able to capture a very good set of images for the feature. I thought that the decision to produce it from the “family week” perspective gave the story a unique angle and differentiated it from a more straightforward destination report. The feature was published in the May edition of Sport Diver in the UK, with an image of Zac adorning the cover. We were delighted with the end result.

Jeremy Cuff is a UK based underwater & travel photographer, photojournalist and enthusiast of the natural world. He's travelled extensively and his work is regularly and increasingly published in diving magazines and websites. You can see more of Jeremy's work on his website.