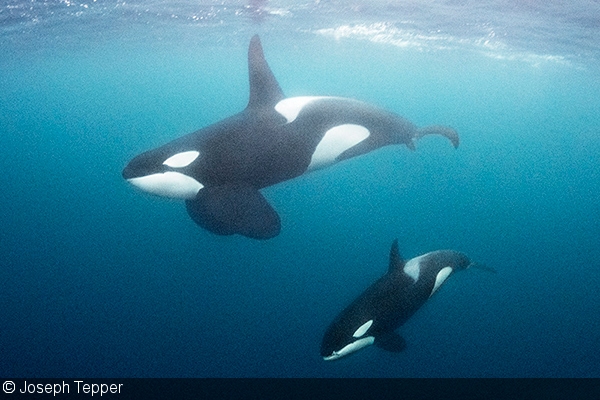 First light in Arctic Norway is a bit different than most places. For one thing, during the late fall, the sun doesn’t make an appearance until nearly 10AM—and even then, it’s more of a cameo than anything.

That’s why freediver and underwater photographer Jacques de Vos has his right eye glued to a thermal monocular as our liveaboard catamaran turns the corner into a massive fjord. Designed for the field of battle or super spies, this device allows us to spot anything, even in pre-dawn pitch blackness, such as commercial fishing trawlers or lighthouses in the distance.

But we’re on the hunt for a much more secretive subject than any spy—and one that continues to elude underwater photographers. With less than four hours of available shooting light, there’s no waiting for dawn to find our targets. That’s why Jacques’ sight of bright white subjects silhouetted against the black sea through the thermal camera is such a welcome surprise. It’s a massive pod of orcas, and they’re headed our way. With the sun finally breaking over the fjord’s mountains, the endless night is over—and the hunt is on. 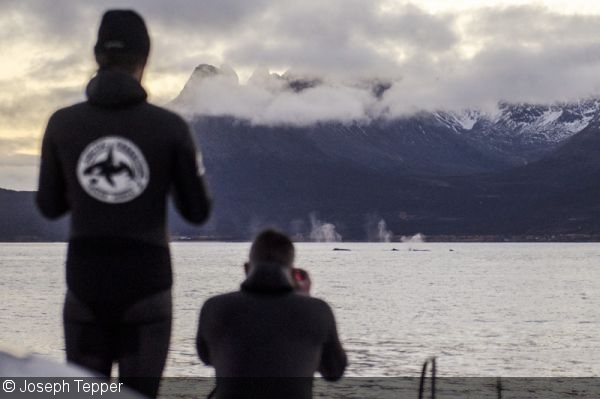 Photographers zoom in on a group of humpback whales 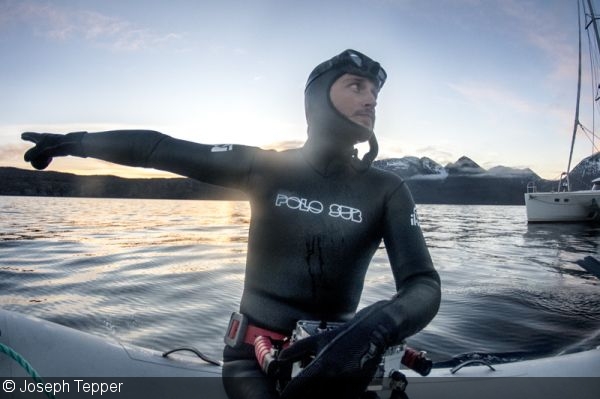 While the Northern Lights and cross-country skiing are the main draws for tourists to the northern Norwegian town of Tromsø, killer whales migrate into these chilly waters during the winter months to participate in a feast of massive proportions. Millions of herring—making their routine migration—are suddenly trapped in the relatively shallow waters of the fjords.

The plate is set for a large predation cooperation between a variety of predators. Using their highly tuned hunting skills and swimming prowess—orcas can reach speeds of 40mph—the killer whales cut off large chunks of the schooling herring. Slowly, the baitball gets smaller and closer to the surface until the whales are able to pick off the herring handfuls at a time with an impressive display of adroit pursuit.

A killer whale performs a tail slap, which signals the rest of the group that it’s time to dive deep 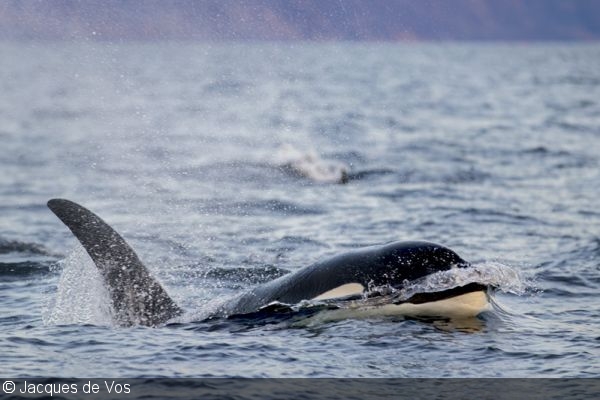 Sometimes, the hunt culminates in a much less nimble—but all the more impressive—event as several humpback whales shoot up from the depths to steal the orcas’ catch. In fact, it’s not uncommon to see humpback and killer whales hunting within just feet of each other—setting aside an all too real rivalry in order to make the most of the meal.

With this bountiful buffet manifested in puffs of blowhole mist hanging like a thick fog over the water’s surface for miles, getting underwater photos of the event seems like a sure thing. But this is the Arctic Circle. And these are the ocean’s top predators (sorry, sharks). Putting those two things together makes this anything but simple. 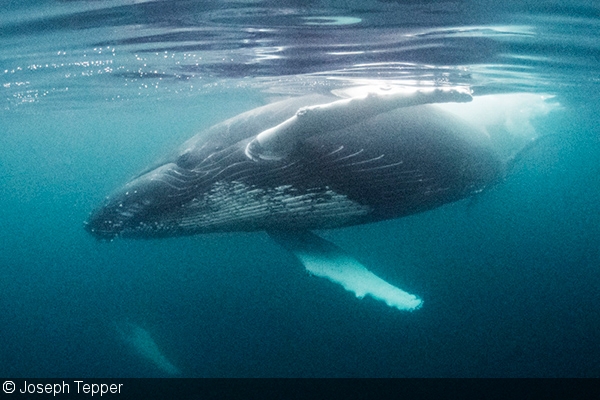 Humpback whales are also in on the feast 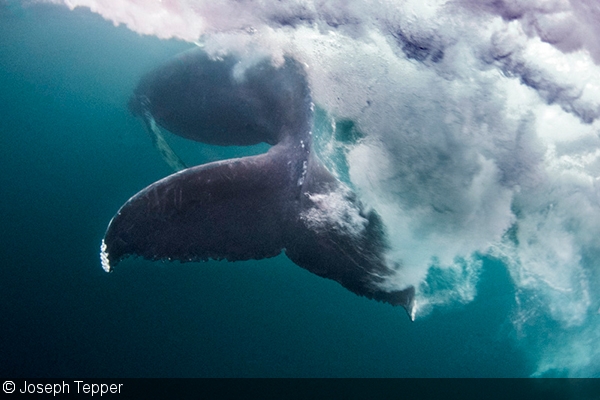 Photographing Killer Whales in the Wild

There are two things you should know about photographing killer whales in Arctic Norway. The first is that it’s cold—very cold. And second: The encounters are unpredictable. These predators are the kings of the ocean and you’re in their realm, at their whim. If they want to spend time with you in the water, they will. If they want to hunt and be alone, you won’t see them at all. 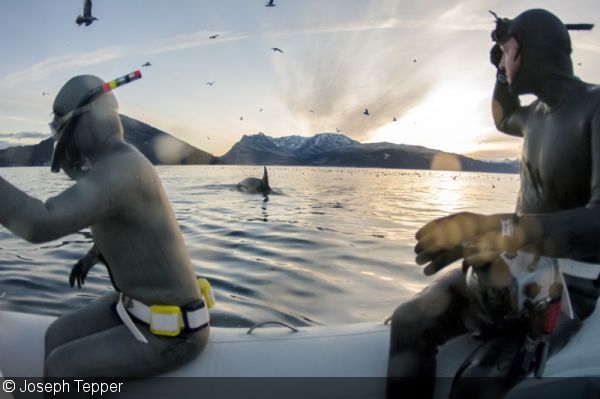 A killer whale comes up to investigate our zodiac boat 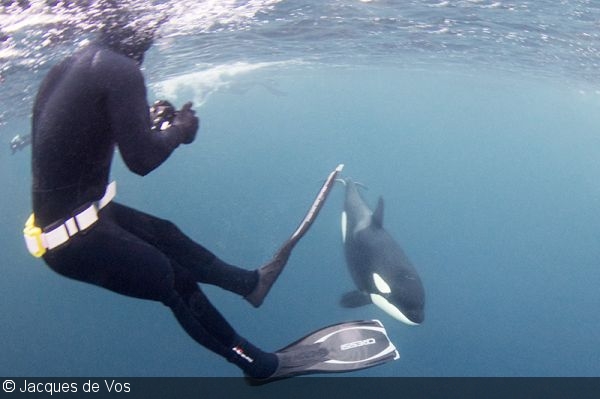 The moment a juvenile orca swims between my legs

Just minutes after we’ve spotted the large pod hunting herring through the thermal scope, the mad dash to get ready begins. I’ve opted for a thick wetsuit instead of a drysuit, a decision will hopefully allow for better maneuverability and freediving, even if it leaves me a bit more bone-chilled. Putting on a wetsuit is never fun, but doing so on a small catamaran in the Arctic is… interesting. And the traditional Norwegian Viking music droning through the ship’s speakers is a nice touch.

The thought of the near-zero water temperature disappears from my mind as we board the zodiac to get closer to the pod. After nearly an hour of following the orcas from afar, they’ve suddenly disappeared from the horizon. Could our engine noise have scared them away? Did the herring baitball move to the depths? Suddenly, a dorsal fin breaks the surface just feet away with a subtle puff. The black behemoth materializes under the zodiac—it’s a massive 20-foot-plus male waiting just below the surface. I jump in. 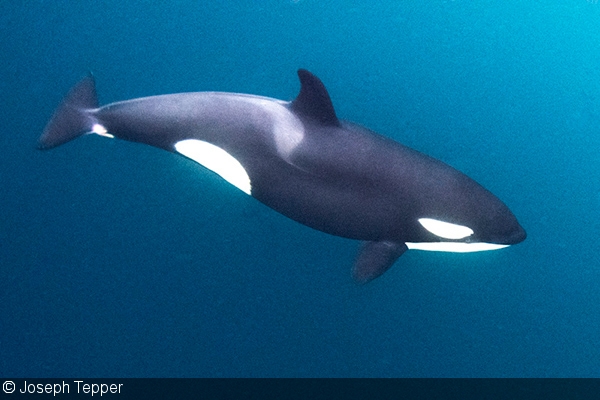 An orca makes his move on a baitball of herring

The cold isn’t the first thing I notice. After all, we did some test freediving the day prior to get used to the low temperatures. No, it’s the scads of herring scales clouding up the water. The orcas are having an excellent meal. A burst of bubbles and squeaks flies past my flank as I manage to fire off a few shots. The light is still minimal and I’m pushing the limits of my camera’s ISO in order to keep the shutter speed high enough for a crisp frame. I’ll call the digital noise in these images a war wound for the tough conditions.

In the coming days, the conditions offer no quarters. And the orcas’ interest in our presence draws thin. One memorable moment is an out-of-the-blue encounter with a curious calf. The young killer whales tend to be a bit more inquisitive than their elders. In one case, a small calf—mind you, still 15 feet head-to-tail—swims almost literally through my legs. On another occasion, I’m shivering uncontrollably as a pair of adults buzzed by within just an arm’s reach—one showing off a freshly caught herring in tooth. Like I said: cold and unpredictable. 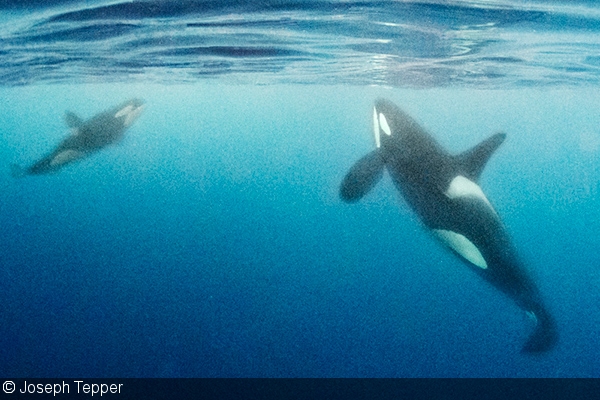 After a day of hopping in and out of the zodiac, I am thoroughly exhausted and the 3PM sunset is a mattress temptress for an early bedtime. But as one show closes its curtain, another is up in lights.

Norway’s Northern Lights are a thing of legend. The result of charged particles from the sun colliding with the Earth’s atmosphere produces brilliant streaks of green, blue and yellow. And on our final night, the light show is as impressive as ever. 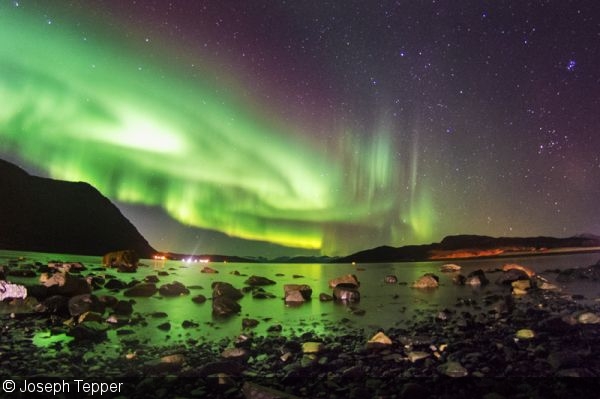 When the sun goes down, the night lights get switched on 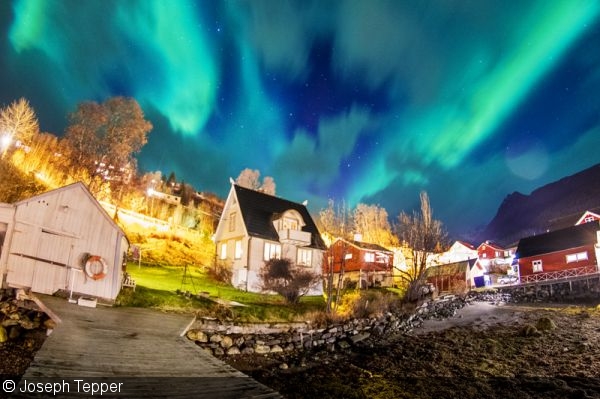 Even on a cloudy night, the northern lights of Norway are spectacular

Jacques has his thermal monocular in hand, as a pod of orcas has recently been reported just outside the harbor. We joke about the ultimate photo: an over-under image with orcas on the bottom and the northern lights flashing across the top.

In the ethereal environment that is Arctic Norway in winter, a photographer is allowed to dream. An impossible dream. But still… 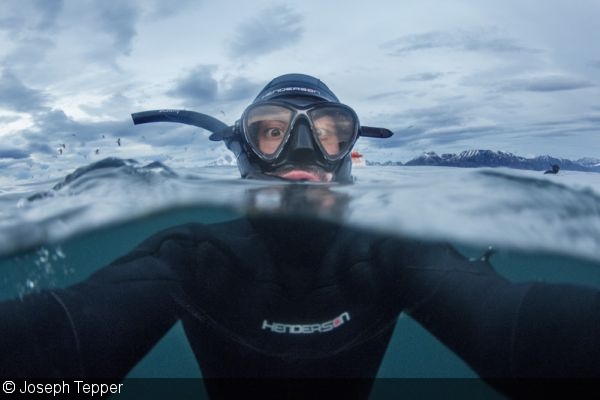