The Philippines consists of thousands of islands, with a great diversity of diving on many of them.  Being situated in the heart of the Coral Triangle, thoughts of idyllic blue water, lush coral reefs, beautiful white sand and a steady stream of colorful tropical fish swimming past your camera lens come to mind.

But what if I told you that some of the best underwater photography opportunities in the country’s countless dive spots is in murky water with little coral, on black sand and very few colorful fish?   If you don’t believe me,  let me introduce you to Atmosphere Resort in Dauin, which is home of some of the world’s best muck diving. 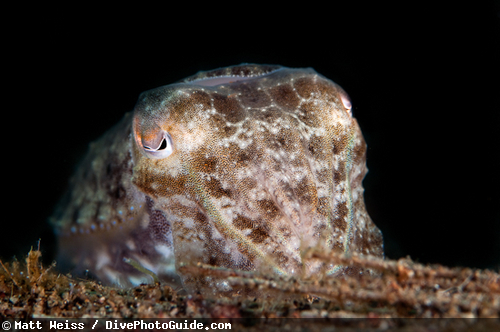 An uniformed diver might descend into the oceans around Dauin and be disappointed by what -at first glance-  appears to be a desolate, sandy expanse.  However, if you look a little closer and explore the seemingly uninteresting landscape, you will be rewarded with a world of creatures that outshines the most imaginative cast of fictional characters ever created.

These secretive animals are treasured by photographers who appreciate a variety of intricate designs, outlandish color and ever-interesting behavior. What’s more, most of these critters move slowly and allow a close approach, which makes them ideal for macro photographers. Often, the hardest part in the photo process can be finding the subject.  That’s why you have to enlist the help of experts – professional critter finders. 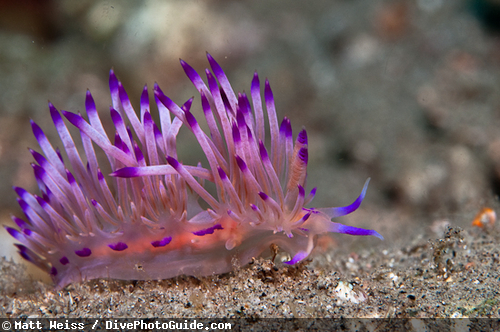 While finding critters on your own is satisfying, to maximize productivity you will need  an expert; and that’s where Atmosphere Resort comes in. Organically nestled into the beach in the beautiful, well groomed, but natural looking grounds, Atmosphere Resort is home to both a world-class spa and a full service dive center. From the large, luxurious rooms, to the heavily planted expansive gardens and the surrounding palm tree filled beach, the whole resort has a spiritual feel to it.  And the spiritual experience does not end on land. For an underwater photographer, with a reverence for the ocean’s smaller majority, the true religious experience happens below the surface. 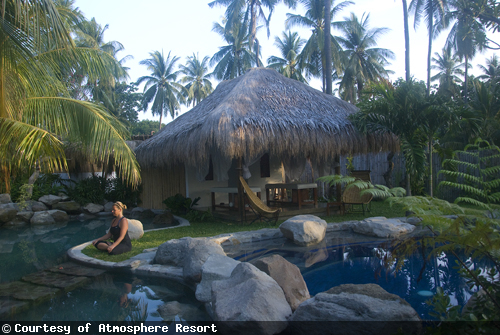 Zen above and below the water

Atmosphere Resort employs experienced guides that are all well versed in both the local dive sites and the subjects photographers seek.  They diligently search for the next subject while a photographer is occupied with the one they just found, which means there is little time wasted searching the sand.  And with the amount of life around, there is no time to waste. 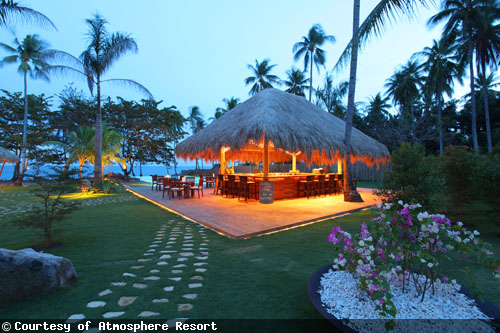 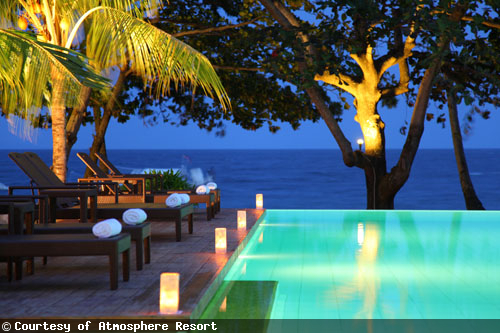 The first impression of Dauin’s dive sites can be deceiving. Most are gradual dark sandy slopes, with areas of hard and soft corals, but nothing that would truly classify as a reef by Philippines standards. However, not far from surface are boisterous, flamboyant cuttlefish that flash an array of colors and textures while they parade along the seafloor; beguiling stargazers that appear lazy and idle until they lunge at unsuspecting prey with startling speed; and ornate ghost pipefish hanging motionless upside down in hopes of avoiding detection-among many other rare and dramatic photo subjects.

As mentioned, the key to capturing these exceptional critter moments is first finding them.  Going slowly, being patient and having some idea what you want to photograph are important factors in seizing these moments.  Becoming familiar with the subjects of the area, even before arriving, will increase your chances of getting your shots.

Critters of the Sand

Informed photographers will ask their guides to spend extra time around the sandy expanses if he/she  desires the coveted flamboyant cuttlefish, as that is their preferred habitat. Endearingly known as “flambos,” these small cuttlefish comb the seafloor in search of small fish and crustaceans. Unlike most cuttlefish, they actively hunt during the day, and fearlessly peruse the sand for benthic snacks.   What makes flambos a sought-after subject are the pulsating patterns and flashing colors the cuttlefish exhibits if it becomes perturbed. Rather than attempting to hide or camouflage like most sensible animals, the diminutive cuttlefish simply relies on a startling mix of red, yellow, purple, black and flashes to ward off potential predators or annoying photographers. 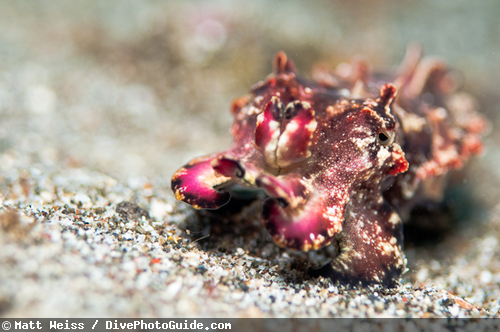 In addition to their gaudy livery, flamboyant cuttlefish display some interesting behaviors.  They have particularly small cuttlebones (notorious for being used as polishing agents and in toothpaste) used for buoyancy control, so flambos can only swim for a short period of time. Instead, they use their blade like arms to walk along the seafloor, searching for prey. After stalking a small shrimp or fish, they shoot their blue tongue out like a dart, and then quickly retract it with the prey attached.

Such a strange and colorful animal makes for a great photo subject. They allow close approaches, and capturing their unique behavior is as simple as just getting the exposure and focus correct, and letting the subject do the rest.  That said, capturing a shot of them eating can be difficult, as their tongue is quite long, and forces you to move away to fit it entirely in the frame. The feeding process also lasts only a fraction of a second, so it is easy to miss. 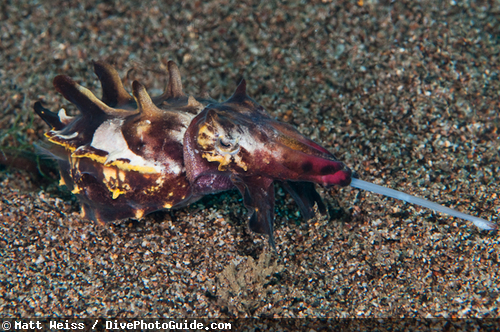 If you shoot a feeding flamboyant face on, it’s easier to fit the extended tongue in the frame. Make sure to take full advantage of the fact that there is little coral to prohibit your movements in Dauin, and maneuver yourself into an appropriate angle. 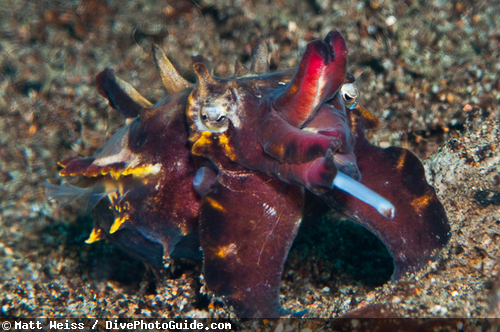 Right in front of the Atmosphere Resort is their house reef. With areas of soft corals and staghorn corals, surrounded by sandy patches, the house reef is ideal for looking for burrowing ambush predators like lizardfish and the wonderfully bizarre stargazer.

Stargazers are a family of nocturnal predators that have a long flat dorsal side with eyes on the top of their head, as their name implies.  These venomous predators are almost always found completely buried in the sand, with only their eyes and top of their head exposed. 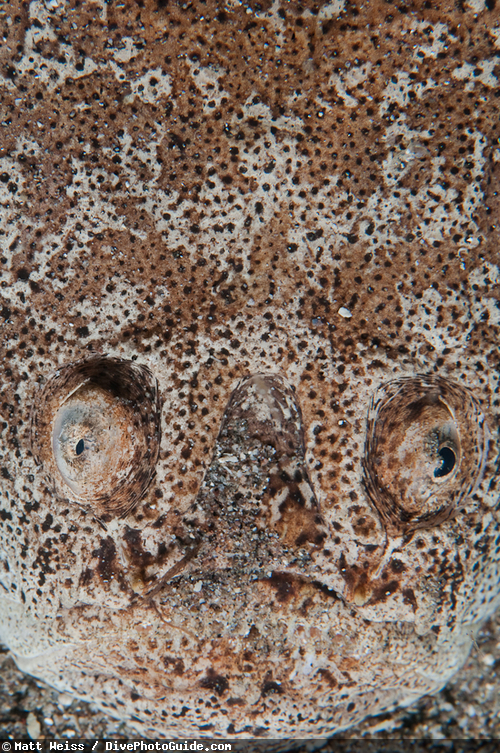 Other photo subjects you can find along the sand include different species of octopus, wondering frogfish and even other types of cuttlefish 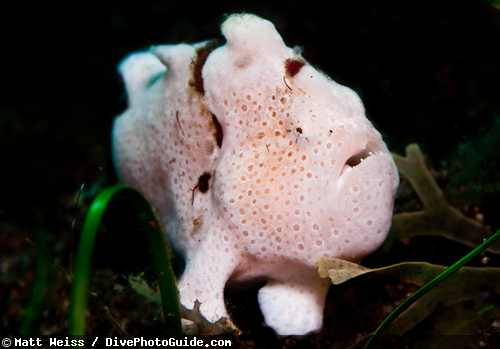 The sandy areas around Dauin are particularly productive for finding predators that are either searching the benthic layer for a meal, or using the sand to lay in wait for unsuspecting prey.  But the patches of corals that break up the sandy areas are filled with life as well.  Many of the corals have symbiotic relationships with invertebrates. In these cases, you simply need to find the conspicuous corals and look closely for their partner.

Bubble corals are a reliable source for –unsurprisingly- bubble coral shrimp. Both parties in this relationship are equally as important in an image, with the shrimp as the focal point of the foreground, and the bubble coral framing it, filling the entire frame.  The textures, patterns and shapes of the bubble coral provide an interesting way to utilize negative space, which is important for macro images. 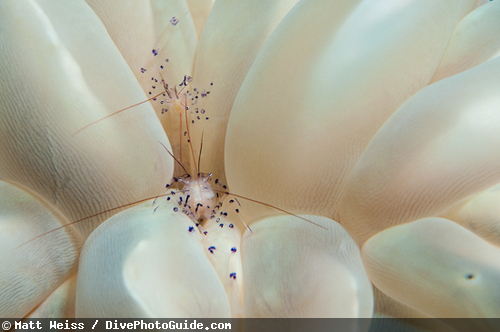 Another symbiotic invertebrate is the cleaner shrimp, which are often found on anemones. There are countless images of these reliable subjects on anemone tentacles, so for a more unique shot look on isolated sea pens, which have interesting patterns and make it easy for a photographer to shoot up at  so as to achieve a black background. 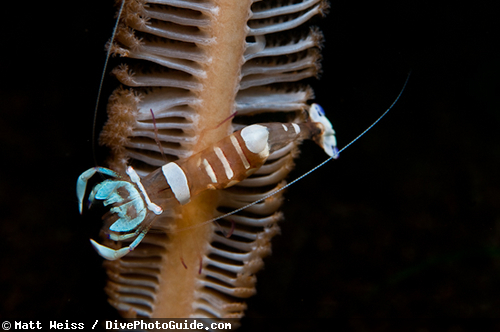 Whip coral shrimp are always reliable subjects as well. If you search enough whip corals, which are fairly common in Dauin, you will eventually find a shrimp. These small, half-inch shrimp look more like a coral polyp than a separate animal, but that’s what makes them interesting to photograph.  The similarity of this animal to its host, with almost every detail of the animal’s body dedicated to simulating the coral exactly, is as powerful as an image of any big animal. 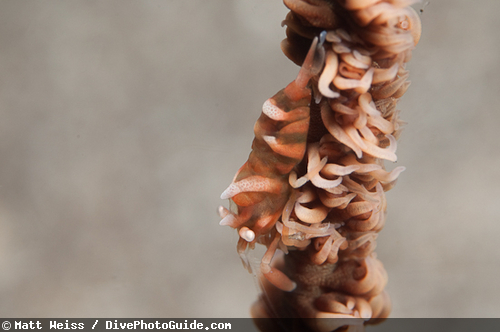 Any South East Asian diving veteran knows that crinoids are excellent places to look for photo subjects. Shrimps and squat lobsters are found inside crinoids all over the Indo-Pacific, but few places offer better opportunities to find the ornate ghost pipefish, a fish that uses its elaborate patterns and coloration to blend in with the crinoids, than Dauin.

When their fins are extended, a ghost pipefish will do most of the work for the photographer, providing startling colors and interesting shapes. The key is to isolate the pipefish on a clean background, which can be difficult when they are trying to hide among the arms of a crinoid. If you’re patient, the fish will eventually “float” to an area of open water, and if you are low enough to shoot up, you will be able to get a clear shot. 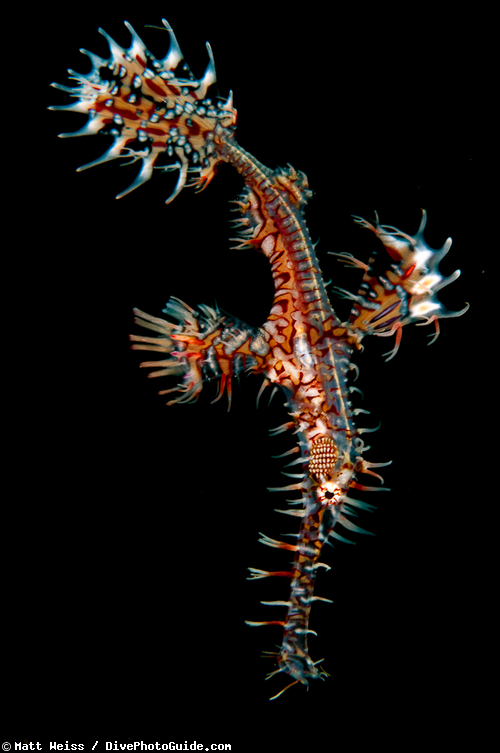 Crevices and holes in rocky areas are also reliable locations for interesting critters- Dauin has plenty of these areas, and no shortage of critters hiding in them.  No trip to Dauin would be complete without a few images of the ubiquitous  moray eels that will slither into almost any hole.  The problem with photographing animals in holes is that you don’t want to photograph whatever clutter is around the subject, and there is no way to capture them in the water column. This calls for some creative lighting.

For morays, which are long and slender, you can use side lighting to only light the subject.  Simply place each one of your strobes on either side of the eel, and have them point at each other. This will prevent anything behind the subject from being illuminated. 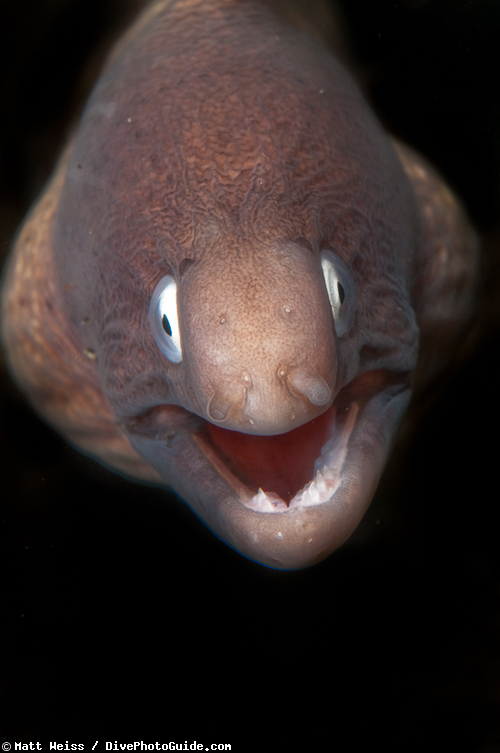 If you only have one strobe, you can try the same technique, but you will cast a shadow on the subject on the side that a strobe is not facing. This strong directional lighting can create interesting shadows to add an ominous mood and drama to the image. 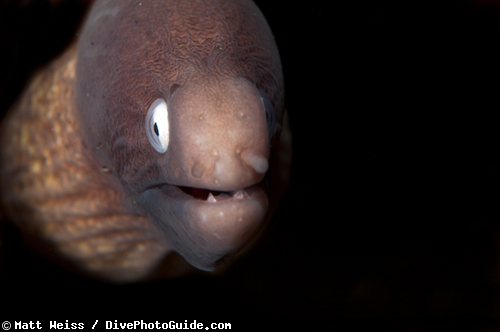 Without question, Dauin is one of the world's best places for underwater macro photography. There is a high density of the alluring, odd and small animals in  this area’s oceans,  and almost every hour spent underwater offers up a number of new surprises.

Even better, after your dives you can relax in luxury or enjoy a massage at the Atmosphere Resort, and try and get that horrible image of a stargazer out of your mind so you can get a decent night’s sleep!

sonja ooms wrote:
We have been diving Dauin for the last 4 years and are off again next week. Just unbelievable the amount of critters that are hiding in those sandy bottoms.
Great pictures.
You must be logged in to comment.
Support Our Sponsors
Advertise With Us
Newsletter
Travel with us