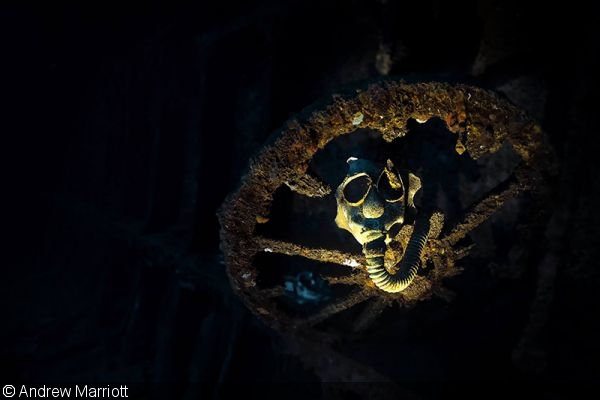 The interior spaces of the wrecks are full of dramatic artifacts

Chuuk is a destination with multiple personalities. On the one hand, very few people have ever heard of it; on the other, it is world-famous amongst wreck divers, but even these hardy souls aren’t always sure what to call it. Is it Chuuk or Truk? No matter what you want to call it, upon arriving there, you are struck by the often extreme poverty, but then you’re blown away by the fantastic generosity of the people. The diving, though, best exemplifies the bipolar nature of the islands. Dives in Chuuk can be deep, dark, dangerous, and dramatic, then suddenly in an instant, they explode in color and life. Where else can you be surrounded by the bones of sailors who died in violent battle and then moments later be gazing at amazing soft coral in a kaleidoscope of colors while surrounded by thousands of fish?

This group of small islands is properly called Chuuk State, and it is part of the Federated States of Micronesia. Located in the central Pacific just north of the equator, Chuuk is also part of the Caroline Islands. When checking in at the airport, the agent at the counter will likely have no clue where you are going when you answer “Chuuk” as your final destination. Just tell them to draw a line from Sydney to Tokyo and stop almost right in the middle. The islands and country may be called Chuuk today, but they are made famous by the name Truk. Today “Truk” is used in reference to the actual lagoon where all the wrecks are resting, so you travel to Chuuk to dive Truk Lagoon. 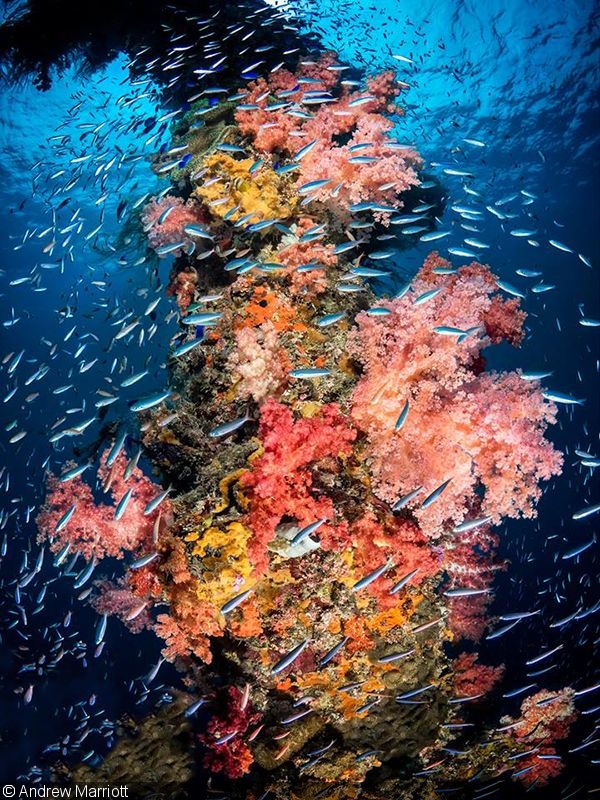 On the outside, the color and life is astounding, a dramatic contrast to the interiors

From the air, the islands of Chuuk are strung out like emeralds and jade on a calm sapphire sea, with the barrier atoll wrapping 140 miles in a protective embrace around the central islands for as far as the eye can see. This vision of tranquility does not last though—ending with the always hard and dramatic landing on the very short runway. This is the closest most people will ever come to a landing on an aircraft carrier, so make sure to hold on! Leaving the airport in Weno and traveling south, visitors are struck by the extreme contrast of a poor small urban area surrounded by an unbelievably rich natural world of the jungle and ocean. Visitors don’t come here for the stunning vistas on land or the sky that seemingly goes on forever; they come for what lies below the warm, flat waters.

Truk Lagoon is home to more than 30 significant shipwrecks that were sunk in violent battle and have never been salvaged. All of these ships are Japanese, and most were sunk in 1944 during two days of massive American air attacks. You won’t find any wrecks that have been cleaned up and sanitized for use as artificial reefs and easy dives here; these ships capture a violent time in our shared history that has remained frozen for over 70 years. Full of amazing artifacts, deep and dark holds still full of cargo, and guns loaded and pointed at the long-departed enemy; any one of these wrecks would be a major attraction in its own right. In Truk Lagoon though you can dive twice a day, every day for two weeks and still have many world-class wrecks left to explore on your next trip. It would take a lifetime to explore and appreciate this cornucopia of wreck diving awesomeness. 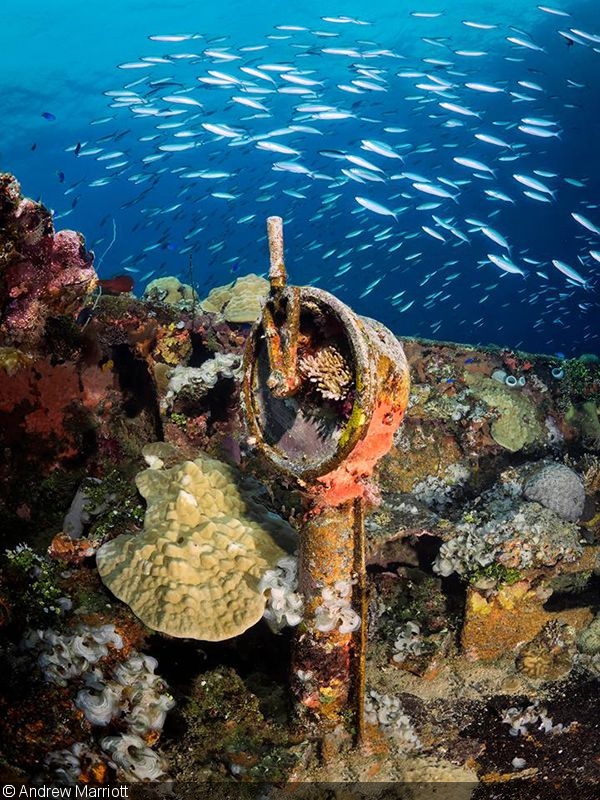 A great mix of dramatic artifact and new life, the engine telegraph on the bow of Fujikawa 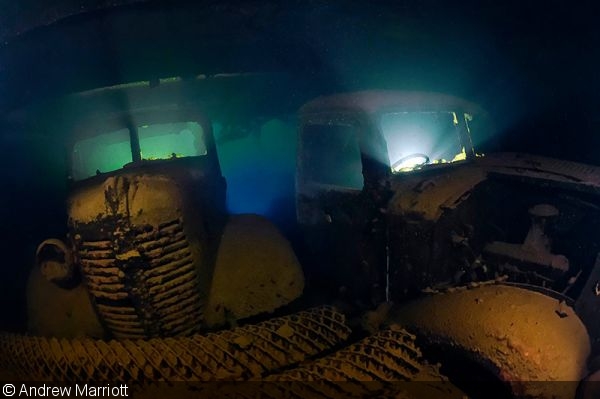 You never know what you might find deep inside these underwater museums!

There is a misconception that diving in Truk Lagoon is only for the most hard-core deep technical divers; this is not true. The wrecks generally fall into two categories: deep and dramatic with a fantastic blend of light and shadow; or shallower and exploding with color and life. No matter what type of diver you are, there will be dozens of amazing dives that will suit you. There are some very deep technical dives, of course, but also an equal number of shallow wrecks where the surface is visible above, and you should wear sunscreen to prevent sunburn while diving in the clear blue waters!

If deep technical dives that take you inside the furthest, darkest recesses of ghostly ships are your thing, then Truk Lagoon has plenty to offer. There are many of these, but perhaps the most intriguing is the Aikoku Maru. She was a massive former passenger liner/cargo ship that was converted into a heavily armed merchant raider early in the war. Aikoku Maru was crammed full of soldiers when she was sunk in a single cataclysmic explosion that completely blew off the front half of the ship. Over 600 men were killed instantly and taken to a watery grave. Diving the Aikoku Maru is a somber and memorable experience that stays with divers long after they leave Chuuk. 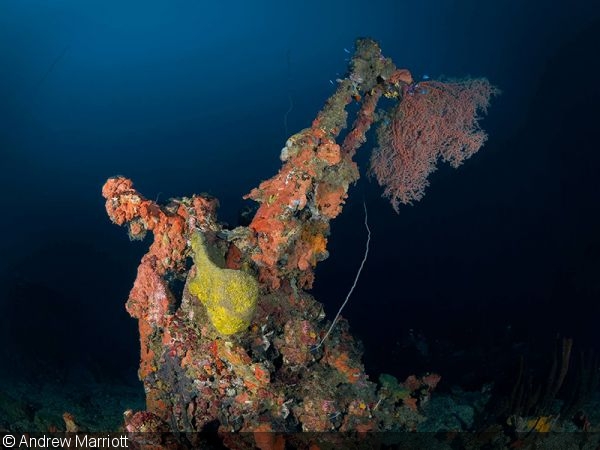 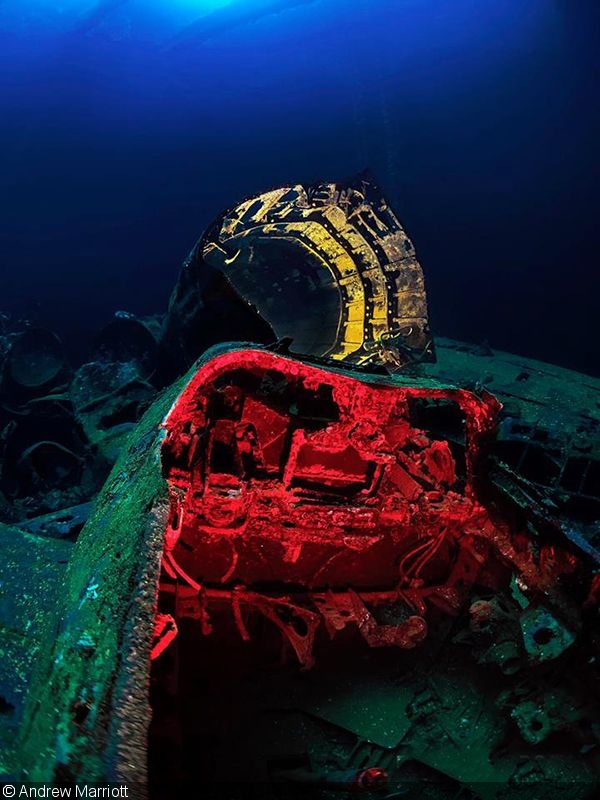 The wreck sits not far off the eastern side of Tonoas Island in an area thick with other sunken ships. Descending into the blue, it takes a long time until the stern mast comes into view at almost 100 feet and by the time you reach the deck at 165 feet, the water around you is a very deep cerulean blue. Heading deep into the cargo holds is an eerie experience as this area was jammed full of soldiers during the battle. Many of the remains were removed and returned to Japan, but these deep, dark spaces that push the depth gauge over 230 feet are still a tomb to hundreds of brave men left unclaimed.

Upon exiting the deepest spaces, divers often pay their respects at a small shrine located on top of the bridge area at a mere 130 feet. This area has a small Buddha statue surrounded by bones, numerous artifacts and two anti-aircraft guns which are loaded and still pointed in the direction of the attacking planes on that morning in 1944. Returning up the mast is a stunning contrast as a deep reef is growing in these areas that receive sunlight and playing a light over it will reveal a covering of thick and colorful sponges and soft corals. Often large schools of jacks and mackerel will be around to keep divers company during their long ascent back to the realm of light far above. 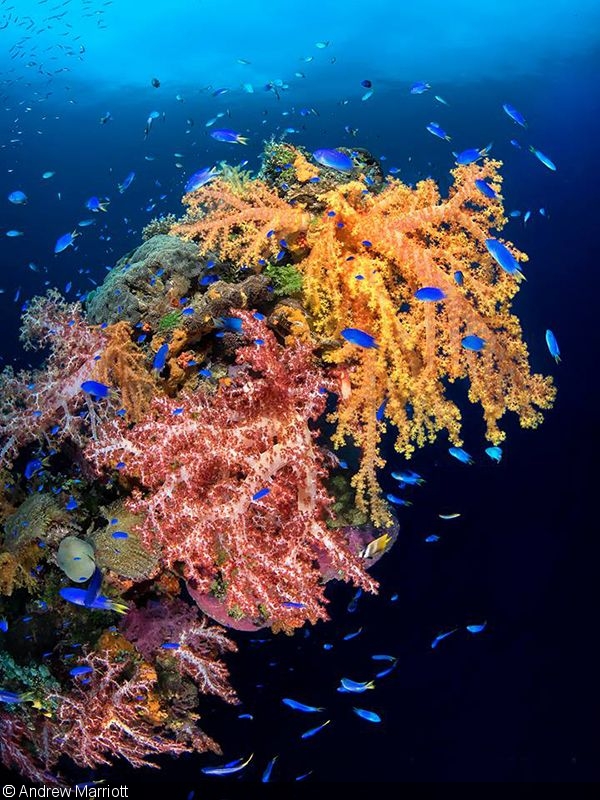 There is so much to see in Truk Lagoon, and most of it is recreational depth and very easy to dive 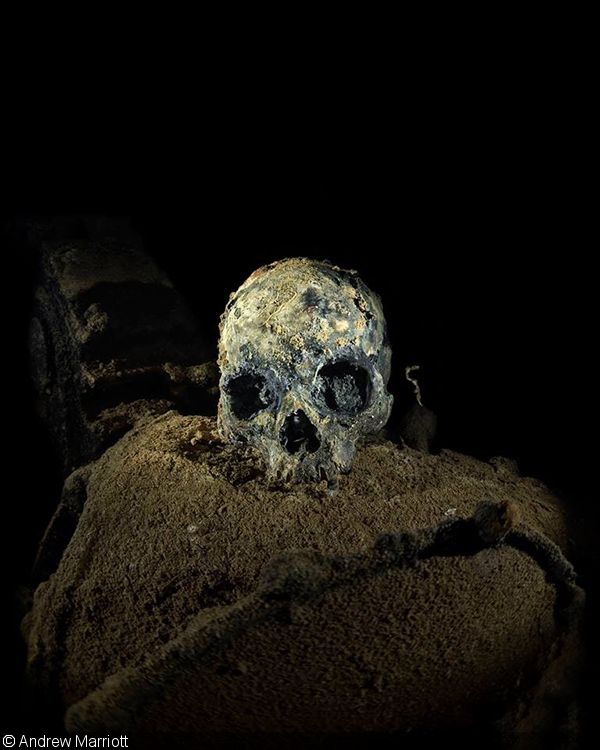 This image and the previous one were shot about 30 feet from each other! Truly bi-polar diving!

Fortunately for the majority of divers, most of the wrecks in Truk Lagoon are within recreational diving depths. There are more than 20 spectacular wrecks that fall in this category, but perhaps the best is the Shinkoku Maru. A huge tanker at over 490 feet long and with her deepest spot being her propeller at 125 feet, she makes a fantastic dive—or dives. The Shinkoku sits upright in an area that gets mild current flow, which is uncommon in the lagoon. This current has turned the Shinkoku into one of the best reefs in the world, let alone best wrecks in the world.

A typical dive on Shinkoku Maru starts at her deepest point near the propellers on a flat sandy bottom. Sightings of a variety of rays and sharks are not uncommon in this area. From the light and blue outside, divers penetrate the engineering spaces through the torpedo hole that sank the mighty ship. In these dark and twisting spaces are ladders, pipes, and catwalks that culminate in a cavernous engine room that looks like it could come to life at any time. These dark and dramatic areas where over 80 men died are exited through a short passage that takes divers out on to the stern superstructure. The transition from dark to light is almost blinding. 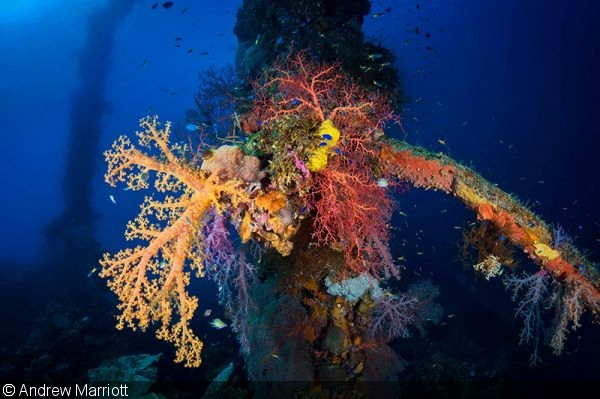 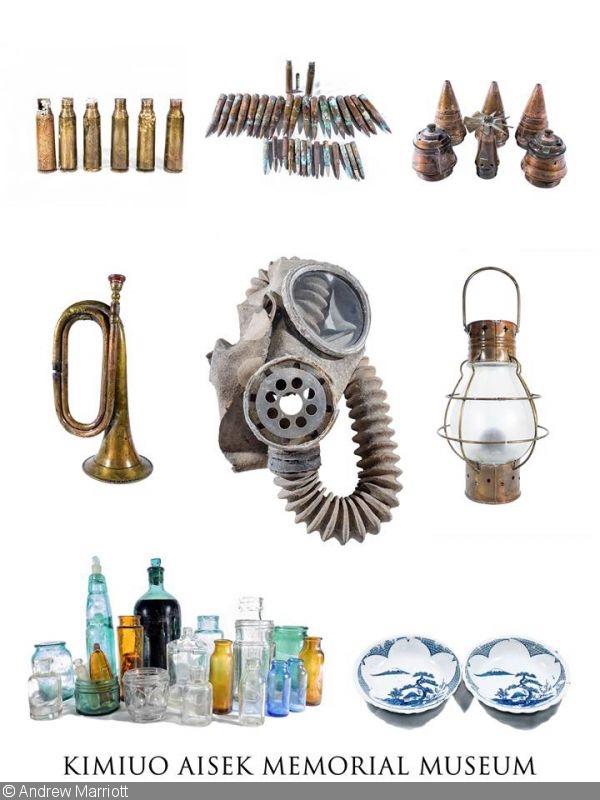 On the decks, the profusion of marine life is so intense as to be almost comical in appearance. Soft corals, sea whips and gorgonians grow in mind-blowing abundance and every color of the rainbow. Vast schools of colorful fish swarm around the big gun on the stern, oblivious to its deadly purpose. If the diver can peel their eyes away from all the fantastic color and action, they will often find turtles resting on the wreck, along with plenty of big pufferfish getting cleaned at the myriad cleaning stations. There is so much to see inside and outside the Shinkoku Maru, it would be possible to dive it twice a day for a week and still find something new and amazing!

Experiencing the wrecks of Truk Lagoon is an adventure that every diver will remember for a lifetime. The contrasts in light and dark, beauty and violence, tranquility and adrenaline rush leave visitors almost dizzy when they finally depart. Diving in the lagoon is something that connects with divers on a visceral level like few other places on Earth. So if you want something more than simple dive trip board that flight to Chuuk and prepare to be changed. 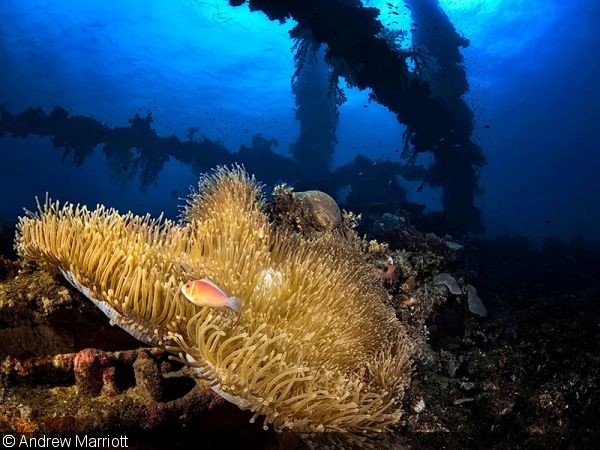 Planning Your Trip to Truk Lagoon

How to Get There: Trips depart from Weno, the largest town in the Federated States of Micronesia. United Airlines flies to Chuuk from Guam and Honolulu. Air Nuigini flies from Port Moresby to Chuuk.

When to Go: November to April.

Who to Dive With: The Truk Master offers excellent 7- or 10-night Truk Lagoon dive safaris. The liveaboard is also the only operation running consistent trips to another wreck heaven, Bikini Atoll, from May to October.

About the Author: Andrew Marriott is the author of a number of books on shipwrecks and diving. He wrote Legends Beneath the Waves: Truk Lagoon in 2016. For the upcoming second edition, he has partnered with Pete Mesley and Lust For Rust to create an updated and even more detailed history of the ships of Truk Lagoon.

klarad lanowy wrote:
That is really amazing
You must be logged in to comment.
Support Our Sponsors
Advertise With Us
Newsletter
Travel with us