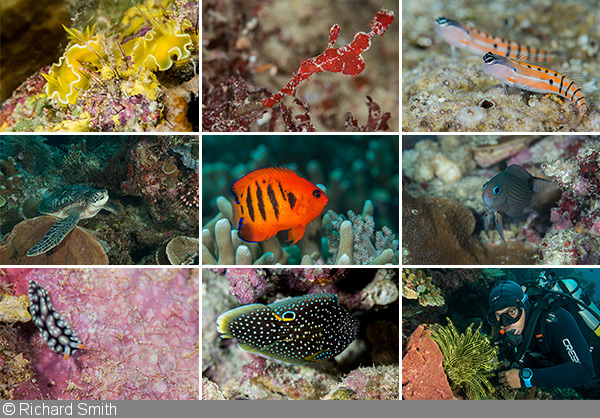 Of Indonesia’s many amazing dive spots, Bunaken National Marine Park was one of the earliest to become established and is one of its most well known. It is easy to get to, via the international airport in Manado, and has many interesting creatures and sites to keep even seasoned divers’ attentions.

Bunaken is located at the northeast tip of Sulawesi, which is connected to the rest of the island via one of the its numerous sprawling peninsulas. The area is dominated by huge volcanoes, making for a dramatic backdrop. Manado Tua, just offshore, is an almost perfect cone that juts abruptly from the ocean and is surrounded by fantastic dive sites.

Siladen Resort and Spa is located on one of the smallest of several islands in the region, just a short ride away from Bunaken Island. It is much more quiet than its famous neighbour, but perfectly located for the area’s premier diving. The underwater riches are many, but there were some subjects that stood out for me when I visited. Some were plain beautiful and photogenic, others were interesting biologically, and yet others were totally unexpected for this part of the world.

As a true critter enthusiast and marine biologist, I often seek out species that I haven’t seen before. A group that I have always enjoyed watching and photographing is the ghost pipefishes. One of these, the Halimeda ghost pipefish, usually lives around its namesake algae, which is a calcareous green species common on many reefs in the Coral Triangle. Despite the alga being common, the ghost pipefish isn’t at all. Since they are almost always found around these algae, they tend to be green to help their camouflage. However, when I arrived at Siladen, I was excited to see a picture of a bright red variant on the wall. Sure enough, there is a rare form found living in the red algae around Bunaken. Finding one became my mission, and a few days later I discovered a pair of these small fish living next to the red algae. 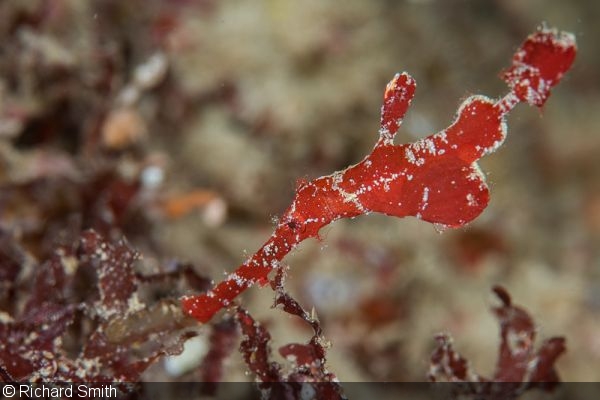 How to Photograph: Do not disturb or try to coax the ghost pipefish in a certain direction whilst trying to photograph it. If defensive, they will constantly try to hide away, making photography much more challenging. Just wait and the animal will naturally turn on its side for a lovely profile shot.

The reefs around Siladen are bursting with turtles. I lost count of how many I saw littering the reef. It’s really lovely to see these wandering reptiles happily going about their business—and luckily they’re not too shy either. A real highlight for me was actually witnessing the birth of a clutch of turtle eggs that were laid on the resort’s own beach. They had been guarded for the roughly 60-day incubation and as soon as the first baby was spotted emerging at dusk, we all dashed down to witness the spectacle unfold over the next hour or so. 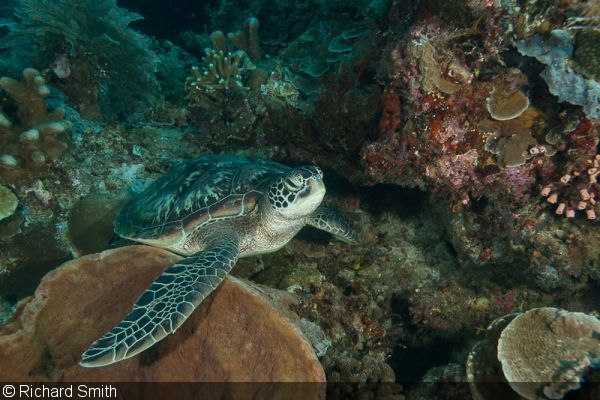 How to Photograph: If you are slow and calm, turtles will allow you to get surprisingly close. Only approach them during the day, as they sleep in a safe spot at night, which they might lose if scared away.

I saw this stunning little fish fairly regularly on the reefs around Siladen. It has a strange distribution that only just touches the northern tip of Sulawesi and Halmahera, with its heartland around north Papua New Guinea and Solomon Islands. It is also unusual in having two color forms, but the individuals around North Sulawesi are particularly colorful and photogenic. The orange stripes on their bodies are almost neon and they make comical subjects. 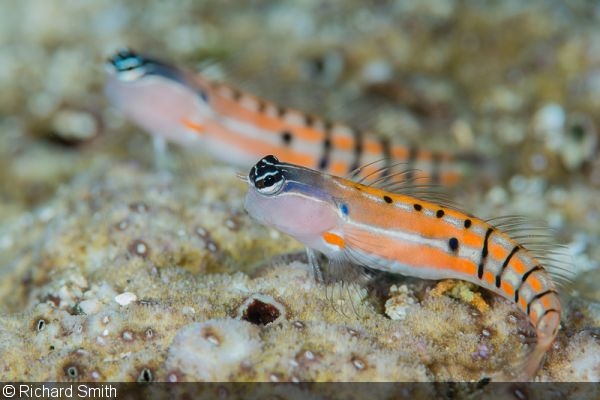 How to Photograph: These fish are extremely skittish, but it is worth dedicating some time to capturing an image. Try and get a little something extra in the shot, such as a colorful background or a second individual.

Comets are widespread but not commonly seen. Still, they seem to have a little stronghold around Bunaken. The body of the fish is actually rather small, but they have huge fins that, when extended, give the impression of the animal being much larger. This is actually part of their ploy of tricking potential predators—that they are, in fact, a large and fearsome moray eel. The fake eye-spot on the tail adds to this mystery and draws the predator's attention to a relatively insignificant part of the body. The fish sits with its true head in a hole and the moray-like tail extended outward so that, if push comes to shove, they can quickly disappear headfirst into a hole and away from danger. 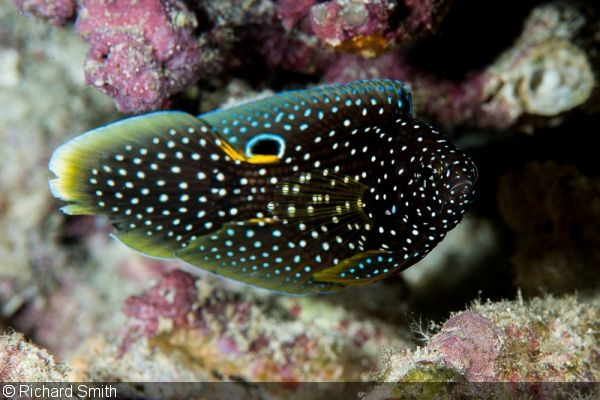 How to Photograph: I don't mind a photographic challenge, and the comet is certainly one. Ask your guide to keep their eyes peeled and if a comet is spotted, just allow for a slow approach. If they look wary, then back off a little until they become more relaxed.

Something that will really help you to make the most of your trip to Siladen is a pair of eagle eyes. Many of the critters on the reef are cryptic and not easy to find. If you're not the best at finding these small hidden gems, then you’re in luck, as the guides at the resort are great spotters. Just let them know if you have something specific that you want to see—within reason—and they'll do their best to oblige. They also make great models! 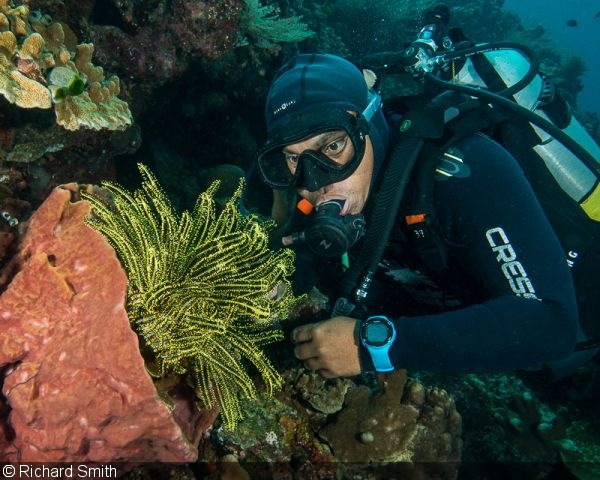 There are many examples of mimicry on coral reefs. Photographing these can add a story to your images that brings an additional element of interest. Whilst at Siladen, I found a flatworm that is a great example of this phenomenon. The worm is an outstanding mimic of common Phyllidiella nudibranchs. These slugs are toxic and most would-be predators know to avoid them. The flatworm exploits this and although it is harmless, predators give it a wide berth assuming that it is the toxic slug. 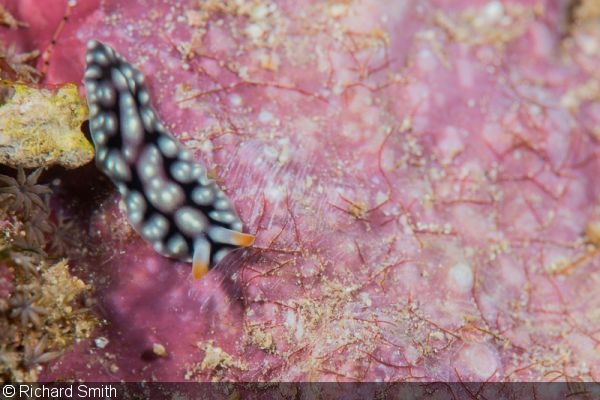 How to Photograph: Flatworms are more active than nudibranchs, so just wait a little for the worm to move onto an appealing background before shooting. Have your settings and strobes ready, so you don’t miss the moment.

There are hordes of nudibranchs and other slugs on the reefs around the resort. I was particularly pleased to find this pair of Diversidoris crocea, which I had only seen once before. Their bright daffodil-yellow coloration made more sense having found them on their food source, a bright yellow sponge. As with all nudibranchs, once you figure out their food source, it is much easier to find them again in the future. I’ll certainly be keeping my eyes peeled on these sponges when I see them again. 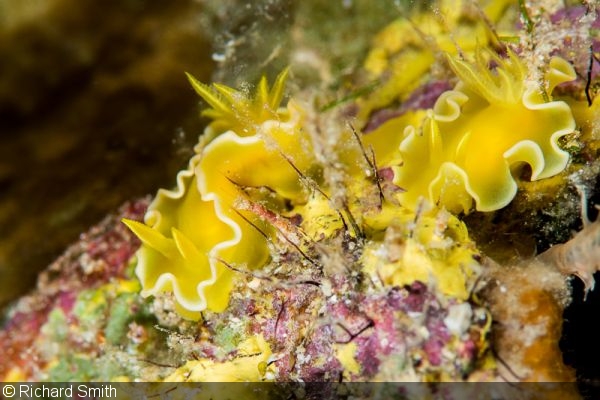 How to Photograph: I like to shoot nudibranchs by exploting the bold colors in which they are often situated. Shooting with a shallow depth of field can reduce the distraction of a cluttered background and replace it with more pleasing pastels.

Crinoids are always a great place to hunt for a variety of photogenic critters. Whether crinoid clingfish, shrimps, squat lobsters, crabs or even ghost pipefish, care must always be taken not to damage the brittle feather star’s arms. It takes patience to find a crinoid that is open enough, or the animals obliging enough, for you to get a nice shot. I have never had to touch or manipulate a crinoid to take a shot of their resident animals. 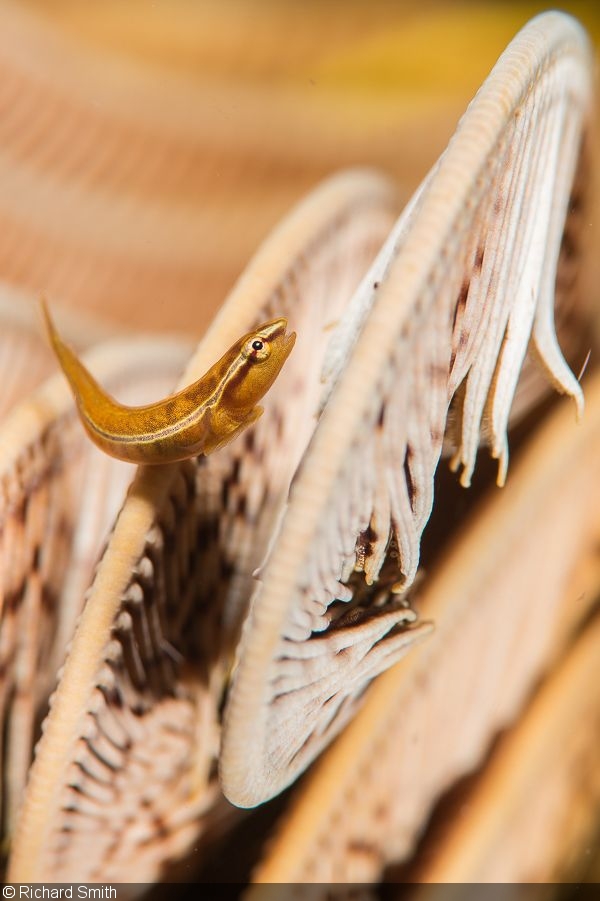 How to Photograph: Don’t use a pointer stick to open the arms of the crinoid. Most importantly, this will damage the brittle echinoderm, but it will also start the crinoid waving its arms, making subsequent photography almost impossible unless the animal is ruthlessly restrained. Rather, look for a crinoid with its arms naturally open and shoot through the gaps. Be aware of your lighting to get the best shot without unsightly shadows.

Dottybacks are an often overlooked group of fishes that tend to inhabit rocky outcrops or caverns and holes on the reef. Because of their biological life history, they have a tendency to form regional endemic species that are found in small geographic areas. Diving around Manado Tua volcano, I found a distinctive dottyback that doesn't quite fit the description of any locally known species. The fish is not entirely dissimilar to the thread-finned dottyback, but it carries very distinctive and obvious red spots on the pelvic fins that are more similar to an endemic Bornean species. I assume it must be the former species, but this just shows that there are always surprises in the ocean. 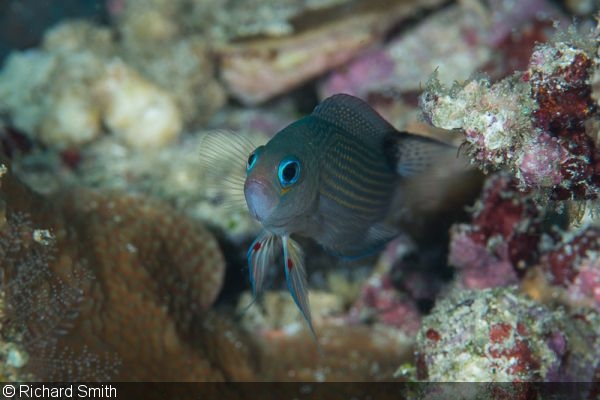 How to Photograph: Have your camera and strobe settings all prepared to shoot a fish of two to three inches from a distance of one or two feet. They have a small home range and generally follow a specific route around it. Prepare and be ready to shoot when you get the opportunity.

Whilst pottering along the rich hard coral reef in front of Siladen Resort, a real surprise came in a red flash. I instantly knew the elusive flame angelfish, having seen a couple in the Solomon Islands. Although these fish aren’t uncommon in the central and eastern Pacific, Indonesia isn’t considered part of their geographic range, and they seem only to have been spotted very rarely in the Philippines. Those of us that haven’t had the opportunity to explore the South Pacific might want to try and photograph this stunning fish. 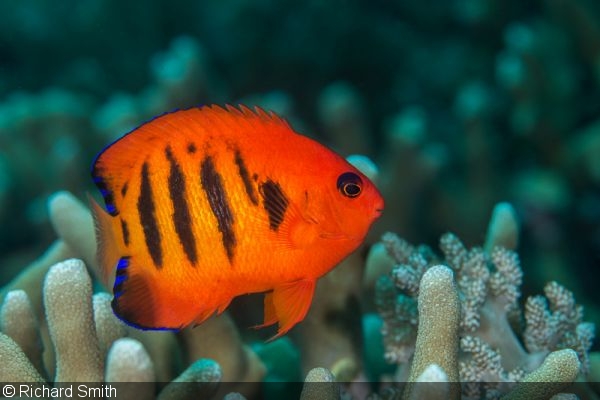 How to Photograph: Dedicate some time to following this shy fish around its hard coral home. They will tend to pop their head above the coral to check you out, but if you keep low and still, they might just allow you to take a few shots. To really get the full splendor of the fish, try and get a side shot that shows off the most red.

About the Author: Richard Smith, a British underwater photographer and writer, aspires to promote an appreciation for the ocean’s inhabitants and raise awareness of marine conservation issues through his images. A marine biologist by training, Richard’s pioneering research on the biology and conservation of pygmy seahorses led to the first PhD on these enigmatic fishes. Over the past decade, Richard’s photographs and marine life-focused features have appeared in a wide variety of publications around the world. Richard organizes and leads marine life expeditions where the aim is for participants to get more from their diving and photography by learning about the marine environment.

clara fleming wrote:
superb
You must be logged in to comment.
Support Our Sponsors
Advertise With Us
Newsletter
Travel with us