An Underwater Photographer's Guide To Lady Elliot Island
May 30, 2009 @ 07:34 PM (EST)
By Jeremy Cuff
Lady Elliot Island marks the southern-most point of Australia’s Great Barrier Reef and has a surprisingly varied and turbulent history leading up to its current status as an “eco resort” which included guano mining. We thought it was fantastic, with great diving, lots of birds, nesting turtles, hatching turtles, simple living and fantastic photographic potential. In fact, we can’t say enough good things about it… 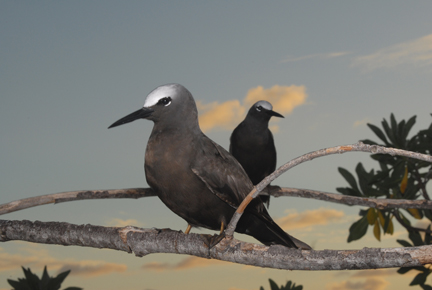 Lady Elliot Island is a tiny speck of an island, appearing like a lone lily pad on a giant pond. It’s located at the very southern tip of the Great Barrier Reef and is geographically isolated, 80 kilometres north east of Bundaberg and some 40 kilometres south east of the Bunker Group, a cluster of reefs, cays and islands. 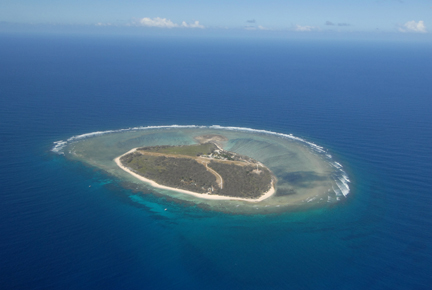 The only easy way to get there is by light aircraft, usually from the aussie rum capital of Bundaberg, the Gold Coast or Hervey Bay. As you approach the island by air, you get a heightened sense of adventure, circling around the island to view the reefs before bouncing onto the grassy runway, scattering seabirds in all directions. 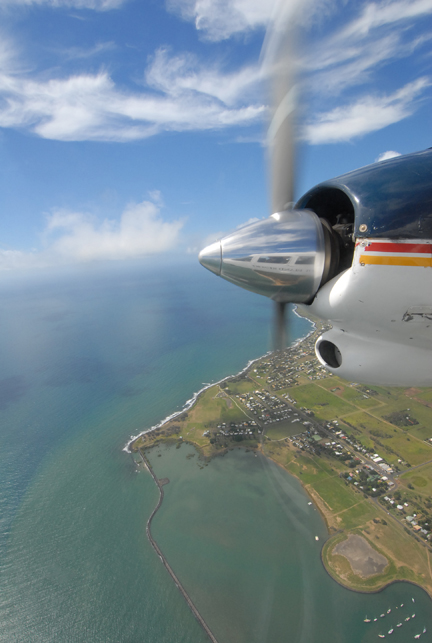 During our research for the trip, the island looked so appealing with its “eco-resort” status that we were concerned that it could only be disappointing in reality, but we needn’t have worried. Lady Elliot Island surpassed our expectations in terms of the whole experience - excellent diving, nesting turtles, hatching turtles, teeming birdlife combined with simple, back to nature living. 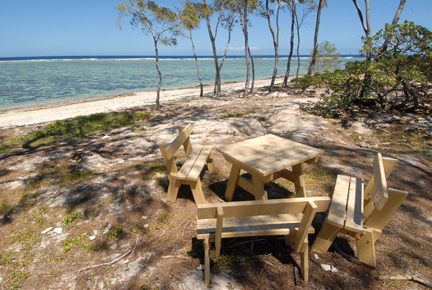 In three days of diving we logged manta rays, eagle rays, shovelnose rays, bull rays, reef sharks, leopard sharks, batfish, schooling jacks and barracuda, and a lot of turtles. The coral was in great condition, too, with the plate corals being particularly impressive. We didn’t see any dolphins during our stay but they are regular visitors, and there’s also the seasonal spectacle of migrating humpback whales. 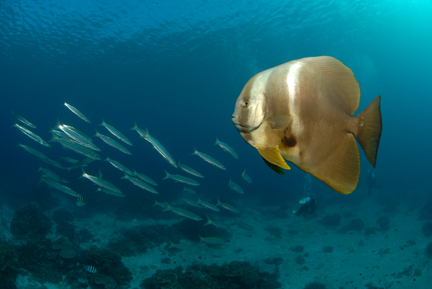 There’s no jetty on the island, so the dive boat is launched from the beach, on the sheltered leeward side of the island, close to the lighthouse. Depending on the tide, divers may have to navigate a walk over a designated area of reef flat with tanks, weights and camera gear in order to get aboard. Anyway, it’s not too difficult and there’s always help from the crew if you’re unsteady. 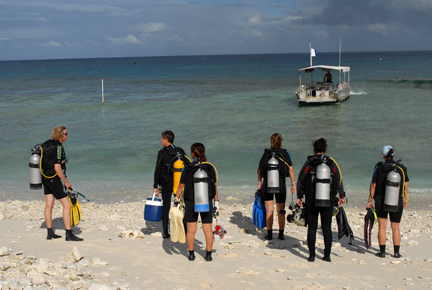 During our visit, the choice of dive sites was limited by a stiff breeze making the seas on the windward side of the island too difficult for the dive boat, but it really didn’t matter.
On the leeward side there’s also plenty to keep divers happy, with the underwater topography consisting of reef flat, a sloping reef, and bommies interspersed with sandy expanses. 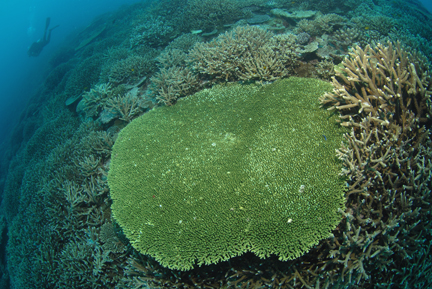 Some of the bommies can harbour some big surprises. At Three Pyramids we spotted part of the body of a moray eel that had hidden itself within the labyrinth of the rock and coral. It was like we’d seen an anaconda – this eel was huge!

Batfish are common at Lady Elliot and are often “friendly”, or at least curious of divers, accompanying us along the reef on several of the dives, as if escorting us from bommie to bommie. Quite often they would latch onto a particular diver which caused some amusement among the dive group. 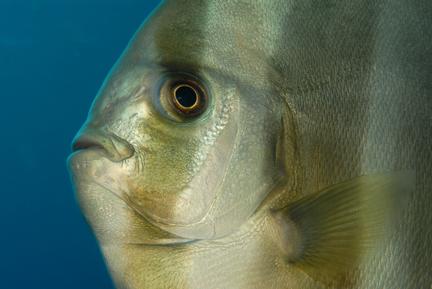 “Close buzzes” with the big stuff are certainly possible but not guaranteed, although you’re likely to have several good encounters over a few days of diving. Our first manta sighting was from a distance, at the Spiders Ledge site. As we explored the bommies and sandy expanses, I looked up to see a manta cruising the surface waters and for an instant it appeared to circle back towards us 15 or 20 metres below. But no, it changed course again and was gone.


Later the same day, at Lighthouse Bommies, we were treated to another encounter, this time a bit closer. A manta swept past across a sandy expanse, touching the sand with its cephalic lobes before rising slightly to clear a bommie and gliding majestically back into the blue. On our last day, we marvelled at another similar encounter, again at Lighthouse Bommies. Although that special close up “photographer’s dream” manta encounter eluded us, we were told that they’re not uncommon.

Eagle rays are also regularly sighted at Lady Elliot Island. I didn’t have any close encounters with these stunning rays unless you count one specimen that glided to within a few feet of me. I had my back to it whilst watching a bull ray!

Bull rays, a large species of stingray, are commonly encountered on the sandy expanses, and sometimes you might be lucky to see the uncommon and more skittish shovelnose ray which we only observed from a distance.

Lighthouse Bommies is a good place to see leopard sharks. They’re normally found resting on sand and will tolerate a close approach if you’re prepared to be patient by edging slowly forward. We certainly saw two specimens at this site, and possibly three, although we couldn’t be sure if the third shark was the same specimen we’d observed at the beginning of the dive. At one point, a stingray glided directly over a resting leopard shark but it was too far away for photography. If only I was several metres closer! 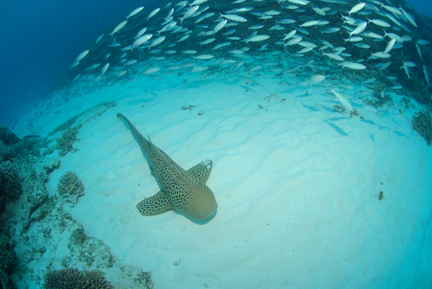 Turtles are really common here. Our visit in March coincided with the end of the nesting season and slap bang in the middle of the hatching season. If hatchlings are discovered on the island in the day, you are encouraged to hand them to staff so that they can be released at night, to give them a better chance of survival We were fortunate enough to witness a turtle laying eggs at the end of the airstrip, one of the last of the season. There can’t be many places where turtles are a hazard to aviation! 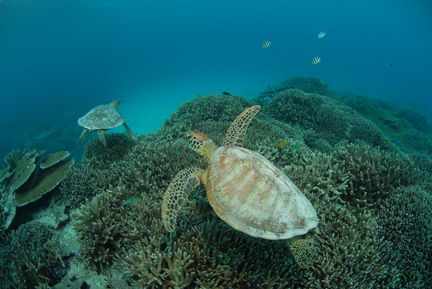 There are long term studies of the turtles being conducted at Lady Elliot Island. The staff give fascinating insights into what their work is revealing about turtle behaviour. The work is aimed at understanding their whole lifespan requirements, so that they might be conserved better in the future. 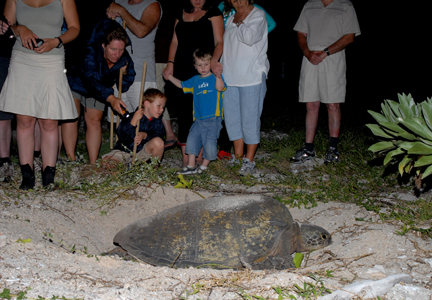 There’s even a small wreck to explore, a yacht called the Severance. The boat rests on a sandy bottom at about 20 metres, not far from the reef. You can dive the wreck and then head towards the island to finish your dive on the reef, or like us, stay there for the entire dive. 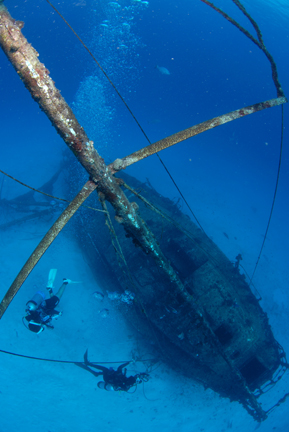 Around the Severance, there was plenty of action and photographic potential. Schooling jacks formed and re-formed into different shapes around the wreck, while sharks lurked on the edge of visibility. We were told that if we were lucky, mantas will occasionally sweep past the wreck, which would have made for fantastic photographs, but it wasn’t to be. 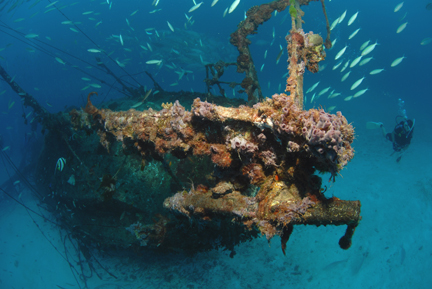 All the big stuff tends to keep you occupied, so we didn’t spend much time looking for the “macro” inhabitants although doubtless there’s plenty to see in this respect too. We asked about night diving, but they seldom happen due to the difficulty and safety of a boat launch at night with no jetty. I imagined that night dives would reveal some very interesting finds. Perhaps that huge moray might be out hunting in the open!


Over 3 diving days, we logged an incredible selection of big stuff, the things than can take years to find themselves added to your logbook, let alone photograph. But it was more than that - Lady Elliot Island is one of those places that you wish you could linger for just a little longer. 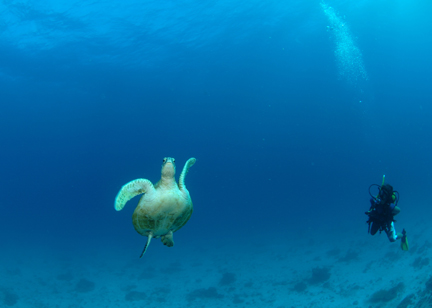 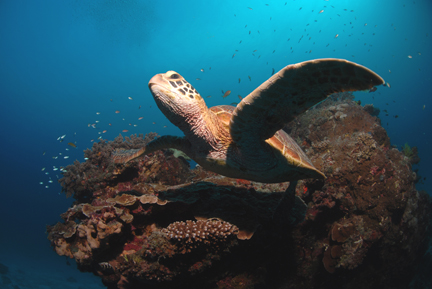