A Fisheye For Critters in The Lembeh Strait
July 28, 2008 @ 02:00 AM (EST)
by Andrea & Antonella Ferrari
The apparently contradictory choice of adding teleconverters to fisheyes to obtain arresting “wide-macro” images has long been adopted by many rainforest and insect specialists – notably Frans Lanting, the grand master of them all – while several Japanese authors have pioneered its use in underwater photography since the last decade. This unusual combination allows an extremely close approach to small subjects, offering at the same time the opportunity to keep a large area of surrounding environment or background in the image frame – with little or no peripheral distortion and with the added bonus of an absolutely spectacular depth of field. Simply put, this technique allows the photographer to obtain truly unique and very personal images which deeply contextualize the subject in its natural habitat – something most macro lenses, such as the 60mm and the much-loved 105mm, rarely permit in this age of reduced size digital sensors. 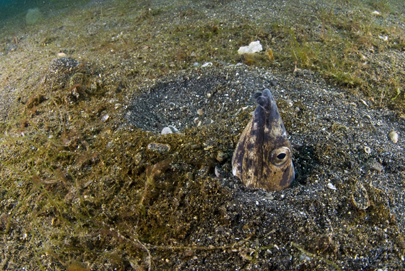 I had long been intrigued by this visionary technique since admiring many close-up and truly arresting rainforest reptile and insect images taken by Lanting more than fifteen years ago, but the long years of work undertaken to put together all the images necessary to publish our books A Diver’s Guide to Underwater Malaysia Macrolife and A Diver’s Guide to Reef Life had restricted us to documentary-style profile shots to be strictly used for identification purposes by other divers and photographers – a hugely enjoyable job, which however prevented us to experiment with more creative options. 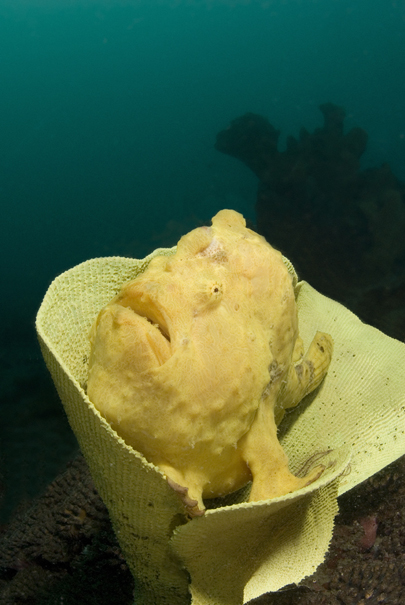 Having just completed our new book, A Diver’s Guide to the Art of Underwater Photography, we recently decided to go back to the Lembeh Strait in Northern Sulawesi, Indonesia, a favourite spot of  ours for relaxing muck diving and interesting new or rare species. Making our base at the much-loved Kungkungan Bay Resort for the fourth time, I 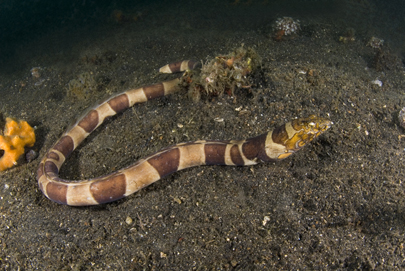 soon found myself strangely and strongly dissatisfied by my 105mm, a lens which for many years past had become an object of cult for me. Macro portraits seemed all of a sudden to have lost visual power – creative apathy had set in. Fiddling in frustration, I suddenly realized that going “wide-macro” could offer the solution to the impasse – even if by definition this technique, as suggested by our friend Alex Mustard, might actually end up being severely restrictive in the choice of subjects and could also create a lot of backscatter problems in the notoriously murky depths of the Lembeh Strait. Anyway, there seemed to be no real choice – so I set up my untried combo of the Nikon 10.5mm plus a 1.4 Kenko teleconverter and had it mounted on my D200 behind the smallish polycarbonate fish-eye dome of my Sea & Sea housing, which until now I had only been using with the 10.5mm alone or the 12-24mm zoom, in both cases with excellent results.


Results were immediately intriguing. I have always been a strong supporter of the use of fish-eyes in shooting close-up images but at the same time I have also been regularly 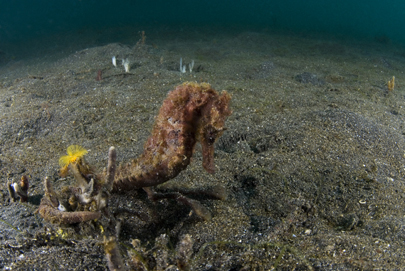 rustrated by the strong peripheral distortion of the image created by the use of such extreme lenses. With the new combination I immediately found myself being able to get in physical contact with most subjects – actually brushing against Cockatoo waspfish, Devil scorpionfish, Snake eels, Frogfish and other critters – with the camera’s dome, getting much closer than it had ever been possible in the past while using the 105mm flat port. It was clear from the start that most species would not associate the approaching, reflective dome with an impending danger, and would not perceive it as the gaping mouth of a looming predator as it had always happened instead with the 105mm tubular port. A slow and careful approach 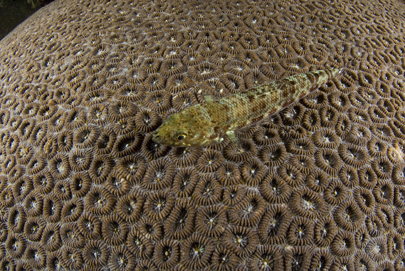 allows exceptional proximity to shy subjects – now it became clear how rainforest photographers had obtained such spectacular images of tree frogs, gaping snakes and displaying praying mantises! A few attempts immediately showed that to obtain the best results in lighting and composition – particularly regarding later editorial use – requested the subject to be strongly positioned off-center, as the usual rules suggest. This is easier said than done however at such short distances and I suggest to focus on the subject’s eye by half-pressing the shutter lever while it is in the center of the frame, and then to carefully recompose while keeping the shutter lever half pressed. A slight peripheral distortion of the image becomes quite noticeable at extremely short focusing distances, so framing becomes an enjoyable challenge – a few degrees above or under the horizontal will generate dramatic differences in the final composition. 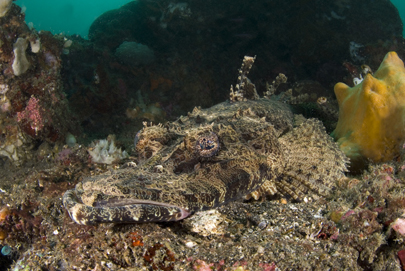 Since most subjects in the Lembeh Strait are generally found lying camouflaged on the sandy, silty or rubble bottom - and not on coral heads or walls as it would happen on a pristine reef elsewhere – one has to literally dig the lower third of the dome in the soft substrate to frame them more or less horizontally and not from above. This is where a smallish polycarbonate fish-eye or wide-angle dome wins hands down over a bigger and much more expensive glass one – there’s little risk of scratching it while rubbing it against the coarse sand or even small sharp pieces of coral rubble, and even if this happens the optical effects are quite negligible since small surface scratches can easily be erased later on (a glass dome would be ruined for good!). This technique requests a delicate hand and some nerve however, since sand ends up collecting around the main O-ring grooves – a risky proposition. The remarkably short focusing distances involved also present the very real risk of actually bumping the dome into corals or rocks with serious risks of damage, so I started closing up towards the chosen subject while holding my left hand in front of the dome to protect it from  car-crashing it somewhere unintended. 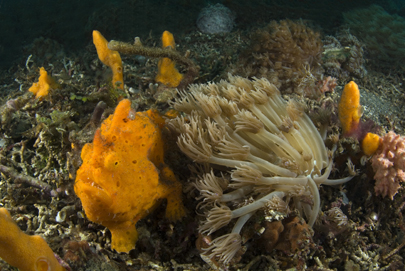 Once the subject of composition had been mastered, lighting was next. I tried some creative experimenting here and there – holding the two Sea & Sea YS-120s close and in front, for example, as in normal macrophotography, or above: but a few trial shots immediately revealed the presence of unwanted parasite reflections inside the dome (remember the addition of the 1.4 teleconverter changes all the curvature ratios between the lens and the inner face of the dome) and an excess of backscatter “snowflaking” in the background. I imagine the same problems – with possibly a slight reduction in the presence of unwanted backscatter – would present themselves in clear water too. My conclusion and suggestion is to use both strobes in “wide-macro” as they would be in normal fish-eye photography – widely spread and positioned as far behind the actual dome as the length of the strobe arms would allow. We are talking about an f2.8 10.5mm lens here, so there’s plenty of ambient light coming in – even in the gloomy waters of Lembeh – and while shooting at ISO 200 with a -0.3 or even -0.7 exposure compensation on my Sea & Sea TTL converter I could get perfectly exposed images at f11, f16 or f18, ensuring razor-sharp focusing and  exceptional depth of field in all images. This is another wonderful side effect of the combo – one is shooting in macro mode without having to worry too much about losing sharpness and correct focus. 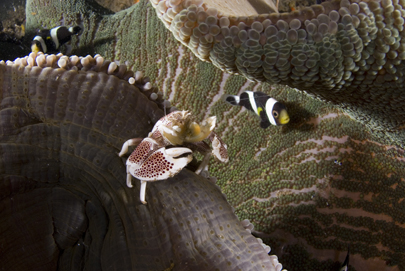 But what about the subject limitations I had been warned about? Again, it soon became apparent there was no need to worry – if correctly and creatively used, the fish-eye + teleconverter combination can successfully handle  any stationary subject in the range size from a couple of inches to more than two feet in length, ie anything from a reasonably large nudibranch to a crocodile fish. It gives its most striking results in the middle range obviously – you’ll be able to get arresting shots of frogfish, lionfish, scorpionfish, sea snakes and especially octopus including Wonderpus and Mimic, all spectacularly contextualized in a wide expanse of their natural habitat, which will stretch all the way in the background, mostly in focus and – if you have been doing your homework and using diffusers – softly, uniformly lit (remember to always keep diffusers on both your strobes, this is an absolute must in such close-up work with digital cameras!). Stationary or semi-stationary subjects offer the best opportunities obviously, but I’ve got great results shooting small groupers or even fast-moving large wrasses with this technique – one is free to experiment given the broad latitude in the focused area. 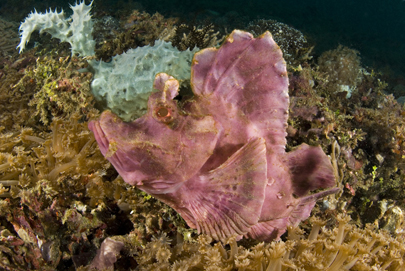 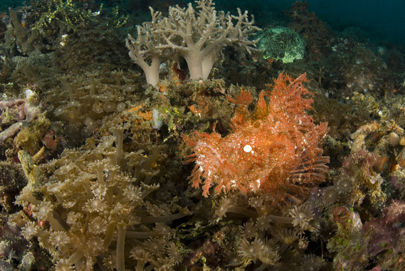 Most importantly, however, to be truly successful one has to combine the “macro frame of mind” (visually focusing on the main subject) with the “fish-eye one” (ie taking in consideration the background) -  an interesting and engaging exercise in creative flexibility which will presumably lead to more compelling visual results and Doubilet-ish photographic results. I can only imagine the striking images this solution could generate on colorful, brightly-lit pristine coral reefs in clear blue water and I am personally hooked  - I cannot wait to try this wonderful and unsung technique on some weird rainforest creatures during our next trip to the tropics!