By Keri Wilk
Travelling and diving alone has many pros and cons– most of which I experienced first-hand during my recent 2-month trip across Indonesia. The freedom associated with planning dives, flights, accommodations, and meals only for oneself can be somewhat refreshing, but for particularly social individuals, the lack of a dive buddy to share experiences with and the nearly constant solitude at the end of each day isn’t always desirable.

For an underwater photographer, the list of cons increases greatly. Instead of having two sets of eyes hunting for subjects to keep you busy, you’re stuck with just your own. When you’d normally have a buddy to keep you safe while you’re focused on a subject through your viewfinder, you’re alone with your bubbles. And when a beautiful reefscape, group of soft corals, or cave opening begs for a model to accentuate it or to add a sense of scale, you’re out of luck… right? Not necessarily. With the correct tools, technique, and execution, you can be your own model, capitalizing on opportunities that might otherwise have been lost.

Being essentially a solo diver for most of my trip, and not willing to sacrifice the photographic opportunities that arose, I had no choice but to do considerable experimentation with self-modeling. Basically, whenever I found a suitable wide-angle subject, I positioned the housing/strobes on a support, placed myself in the scene, and “took” the photo. In this article I will describe the gear I used, the problems I encountered, and the techniques I employed in my self modeling underwater photography endeavors. 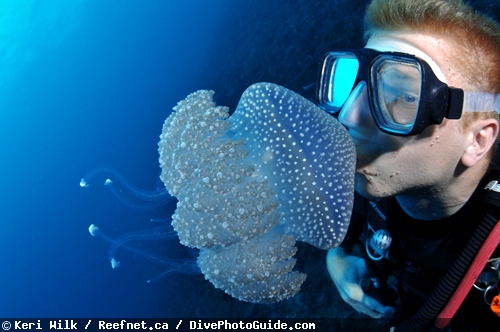 NOT the self-modeling I’m talking about…

You don’t need anything special to start modeling for yourself – just a housing with a tripod mounting hole, a tripod that you don’t mind taking underwater, and a camera with a self-timer mode.

Housing
Most housings today incorporate at least one or two 1/4 -20 threaded holes in their bases. This is the same size threaded hole which can be found on almost any land camera. Tripod mounting plates or heads are designed primarily for this size mounting hole, so finding a suitable tripod shouldn’t be a difficult task.

I was using a Nauticam DA-90 housing for a Nikon D90 camera, which comes equipped with 3 appropriately-sized mounting holes, ready to accept a tripod. 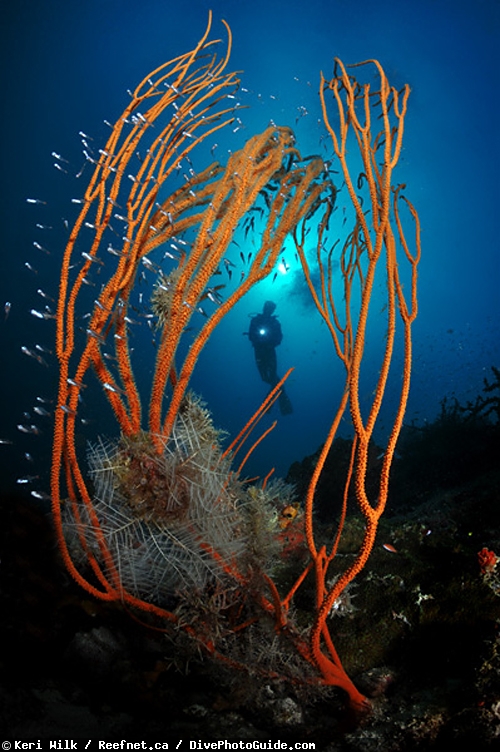 Tripod
Since you’ll most likely be trying this technique in a saltwater environment, I would advise against using your fancy/bulletproof/expensive tripod to test out this technique. While most high-end tripods are primarily constructed from lightweight rust-resistant materials (carbon fiber, aluminum, etc.), their nuts, screws, and bolts are often rust-prone steel, so thorough freshwater rinsing would be required to keep them alive. In my opinion, you’re better off going with an inexpensive tripod that you don’t mind keeping around for a year or two before either replacing the rusty hardware, or just tossing it in the garbage.

I used a Velbon CX-300 tripod during my trip, which cost a bank-breaking $30. It weighs only around 2 pounds, so when the housing was attached to it, even moderate current or surge was enough to either shake it or fully dislodge it from its position. To stabilize the system, I attached a 3-pound lead weight to each of the legs, which made it rock-steady in all but the strongest currents that I encountered (when I wouldn’t even have considered setting up the tripod anyway). By the end of the 2 months, all of the steel components were heavily rusted, so I’ve temporarily retired it until I find the time to replace the ruined components. 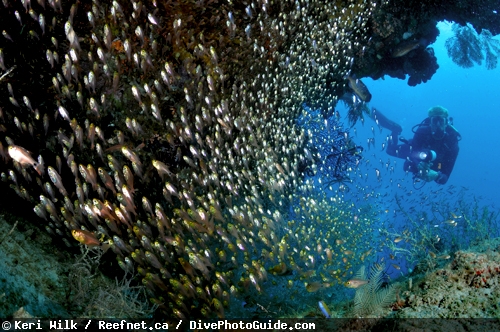 Alternatives to the typical tripods are their short, flexible cousins --- Gorillapods. With legs only 11 inches long on the top-of-the-line version, this type of tripod is ideal for setting up shots where a low vantage point is required, which, in the case of most cheap inexpensive tripods, isn’t otherwise possible. On most dives, I had my remote snooted strobes slung under each arm, attached to their own Gorillapods, so if a situation presented itself where a lower camera position was required, I simply swapped the Gorillapod from a strobe, onto my Nauticam housing. The only real issue with them is that there is no easy way of mounting the camera vertically. 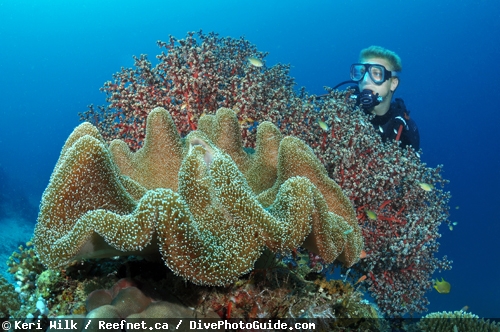 To minimize the stress on the tripod’s components (and your arms!), it helps to tune your camera system to be nearly neutrally buoyant – I like mine slightly negative. I mention this because I didn’t have time to tweak my housing to the point I wanted, so my tripod was almost broken by the end of my trip from all of the additional stress.

Camera
Triggering the camera after you’ve left it on the tripod and moved into the frame requires either a housing with a lengthy remote shutter release mechanism, or a camera with either a self-timer or an interval timer mode. Physical remote triggers seem too limiting for this type of photography (but I’ve never tried them), so I used my D90’s self-timer mode exclusively. Most modern digital cameras have self-timers allowing delays of up to 20-30 seconds, which, in most cases, should be plenty of time to swim into position for each shot. 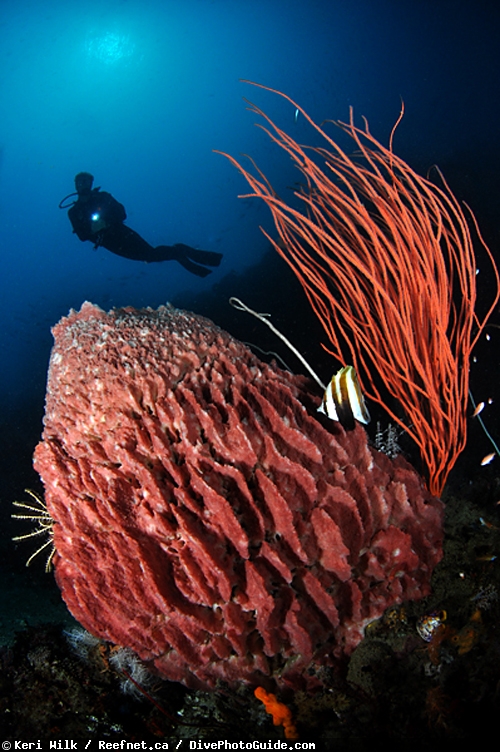 The D90 I was using can be set to shoot multiple consecutive exposures once the self-timer expires, but this function doesn’t work when the camera’s built-in flash is popped up. The use of fiber optic sync cords to trigger your strobes eliminates this exposure feature. Since I didn’t have functioning electronic sync cords with me, I was forced to swim to and from the camera for each shot. This is not an air-consumption-friendly process, but it works nonetheless.

Some cameras have a built-in interval timer mode, which allows any number of shots to be taken at any interval, starting at a user prescribed time. This is ideal for self-modeling underwater photography, since it eliminates the need to swim back and forth to the camera between shots. The D90 I was using does not have this feature and, as a result, the bulk of this article pertains to using a camera’s self-timer mode. 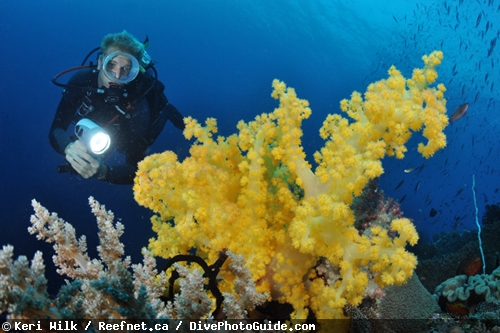 TECHNIQUE AND TIPS
Having the correct equipment is easy enough, but using it efficiently and effectively is a different story. I estimate that 80% of the self-modeled shots from my trip were botched in one way or another, but I eventually got the hang of the process and my success rate began to rise. Compared to shooting on land, setting up a camera, housing, and strobes on a tripod underwater requires consideration of many more variables. If you find yourself in a situation where you need or want to model in your own shots, here are a few tips that you might find helpful: 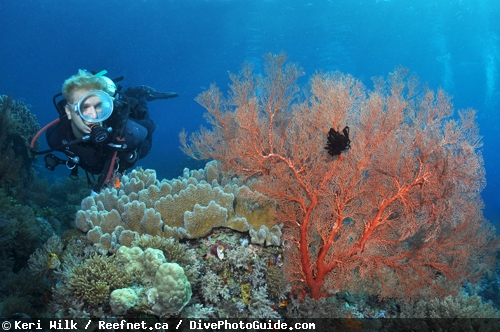 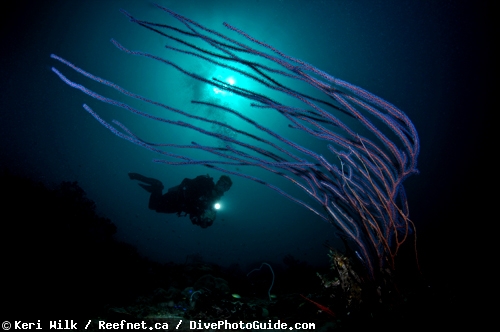 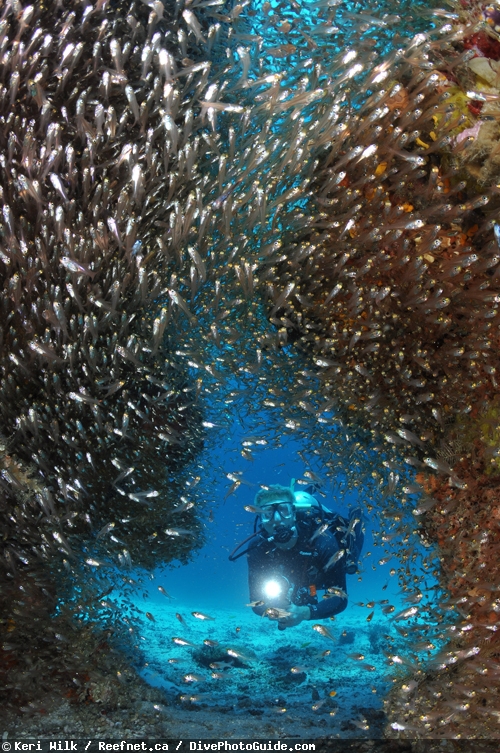 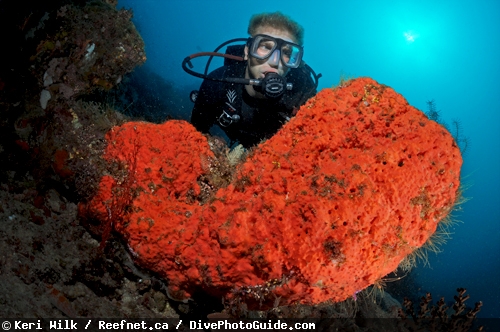 Self-modeling in underwater photos is far from practical -- my bottom time was drastically reduced; I was putting myself at greater risk by solo diving and making M-shaped dive profiles (up-down-up-down); I was producing only 1-3 usable images per dive; carrying a 10-pound tripod across my chest was a buoyancy nightmare and not the least bit comfortable. Nevertheless, this shooting method can be used effectively to create great modeling images, and is your only option when you’re stuck without a dive buddy. 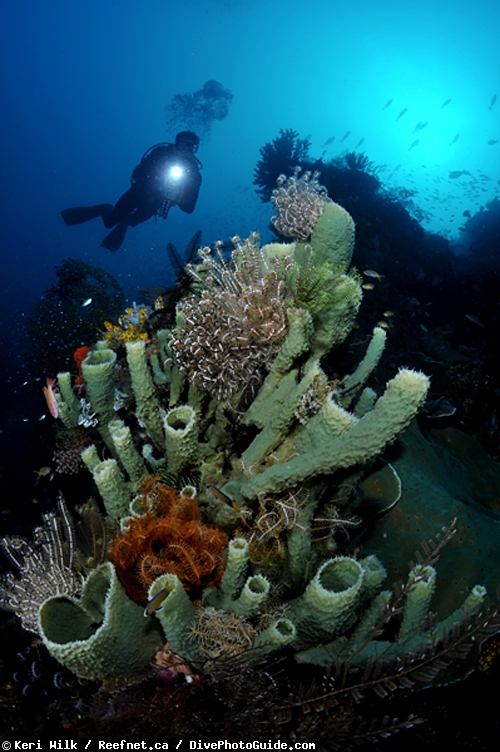 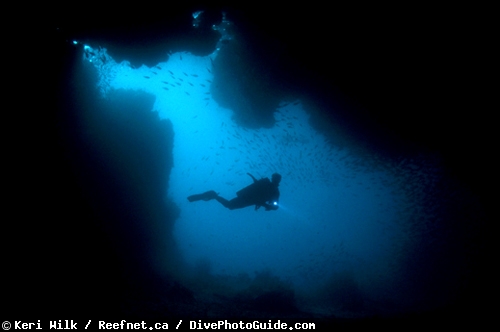 NOTE: All of the images in this article were both shot and modeled by the author using a Nikon D90 (with the 20s self-timer mode), Nauticam housing, Inon Z240 and/or Ikelite DS160 strobes, ReefNet snoots, Tokina 10-17mm lens, and Velbon CX-300 and/or Gorillapod Focus tripods.

Keri Wilk is an engineer and underwater photographer with 15 years of experience exploring the world's oceans. His photo credits include many international awards and publication in magazines, scientific journals, books, and field guides. He currently designs new products (e.g. SubSee) and leads underwater photo expeditions for ReefNet Inc.

Alex Mustard wrote:
Ha ha. Great stuff, Keri. But who do you argue with after the dive! A benefit you don't mention is that at least your model knows where you want them in the frame. Saves a lot of hand signalling.
Dan Bolt recent came 1st and 3rd in the BUIF Splash-In with self modelled shots, beating all those with dedicated models and without the judges knowing it was him in the photos.

You shoots are great and wonderfull.
Technique is exellent but very difficult for repetition.

peter Nicholas wrote:
Great idea Kiri but sorry you just don't have the curves and 20 seconds isn't long enough to do you hair!!...

Keri Wilk wrote:
Thanks, Alex - Not having a scapegoat for my many botched shots was certainly disappointing :D And Good point about the hand signaling. Although, I'm not sure what's more annoying - attempting to guide someone with clumsy hand signals or turning each dive into a cardio exercise, doing laps back and forth to the camera to review images.

Dan's winning images certainly speak volumes about this technique's merit! But, man, what a pain in the butt it is to execute...

Alexey/Steve - Thanks for the kind words!

Peter - haha! I've got a wig and some estrogen pills to eliminate the problems you pointed out on my next trip... :)

ck chong wrote:
Hi, I'm using a some camera, lens and housing with nauticam 8.5" dome. What I feel is my dome is always facing up when I not holding it. Are you using a some dome or zen 100mm?

Michael K. Hill wrote:
Once again Reefnet shows us the way.. I've used a tripod a bit in the fresh waters of Lake Ontario to get longer images of our wonderful wrecks, but I had never considered self portraits. A great article accompanied by the usual wonderful images from Keri..

Nancy Boucha wrote:
Keri: You have done a fantastic job of showing the pros and cons of travelling alone as well as solo photography. Although your bottom time is limited, you got some great shots.

Gaby Zimmermann-Nenadal wrote:
Awesome! I never thought about self-modeling... So often, I'm also short of models and I thought, I'd love to model for that shot AND take the picture but how to do that besides cloning? This seems to be the - slightly - easier answer... :)

Gertens Gertens wrote:
Super
You must be logged in to comment.
Support Our Sponsors
Advertise With Us
Newsletter
Travel with us 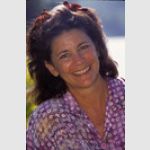