It was unfortunate that I read Herman Melville’s classic, Moby Dick, just before my first dive with sperm whales. Adding to my trepidation, less than 20 years earlier us humans were still throwing harpoons at this particular population. Would they remember and would they know I came in peace? To top it off, the water was more green than blue and I saw little more than murky gray outlines gliding by in the gloom.

Fortunately, my self-induced anxieties were foundless, and the water quality improved. Many hundreds of whale encounters later, I can say that I have never met a whale that was in a bad mood. In fact most have extended me great courtesy, leading to my most thrilling encounters in over 40 years of diving.

Here are some of the things that have worked for me in 10 years of whale photography. 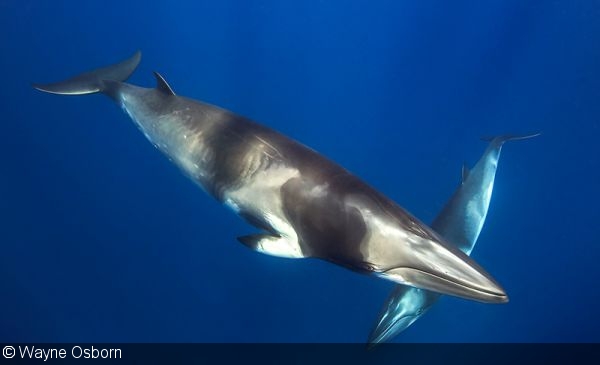 Where to Photograph Whales

Photographing whales is highly location dependent, with many destinations being known for one specific species. Here is an introductory list to some of the top whale photography destinations, but I encourage you to read DPG’s “Big Animal Underwater Photography Guide” for further information on species.

Humpback whales are probably the most photographed whale. The Kingdom of Tonga has well-established operations on the island of Vava’u, with regular encounters occurring August through September. Another popular destination for photographing humpback whales is the Dominican Republic’s “Silver Banks,” with the season taking place in the earlier part of the year.

In Australia, recent changes have allowed swimming with humpbacks at Hervey Bay and Mooloolaba (on the east coast) and will also be allowed on a trial basis from 2016 for the Ningaloo Reef (on the west coast). 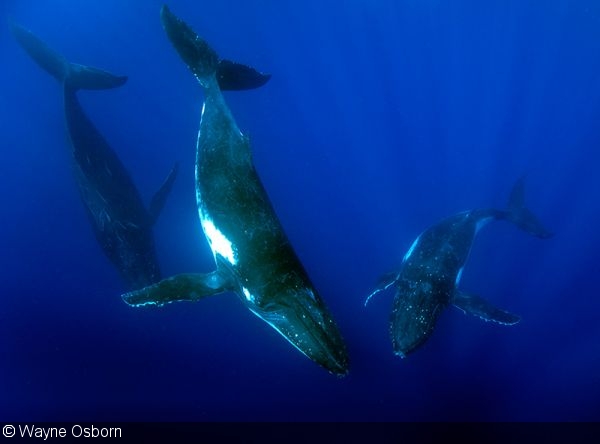 In the Azores, day boats leave from the islands of Pico and Faial during June through September. The permits required are generally only issued to professional photographers and scientists. It’s worth the effort though, as you can see upwards of 10 whale subjects per day.

A new sperm whale photography destination emerged in recent years: a small island nation in the Caribbean called Dominica. Here, as with the Azores, permits are required and hard to come by. Your best bet is going with a group of photographers led by someone with a permit. 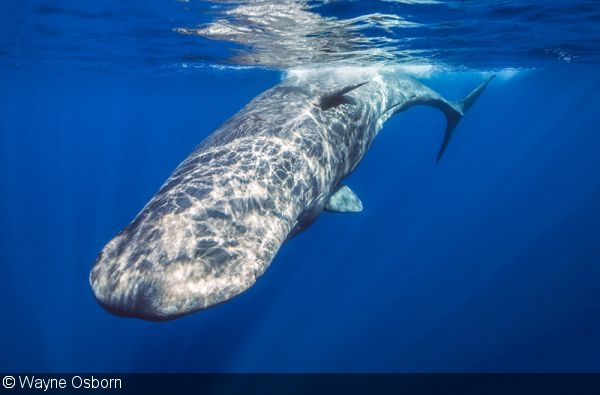 Diving and Swimming with Whales

Most whale photography is done while freediving or snorkeling unless you are lucky enough for whales to pass by while scuba diving. In general, the bubbles can be a deterrent as well. A notable exception is Brian Skerry’s fabulous shot of a southern right whale and scuba diver taken in the Auckland Islands, south of New Zealand.

Research the water temperature of the location before you go and gear up accordingly. In the Azores, I generally wear a 2–3mm full-length suit in water temperatures of 64°F (18°C). I am generally on the water for up to 12 hours and with many water entries it can be a long, tough day.

Weights are essential to counteract the suit’s buoyancy. In warmer waters, you may get away with a light vest and no weights. Work out how much time you are going to be in the water and suit up accordingly. For dwarf minkes, four-hour in-water stints are common. I know one researcher who stays in for eight-plus hours. These encounters as so precious, who wants to get out of the water just because you are cold? 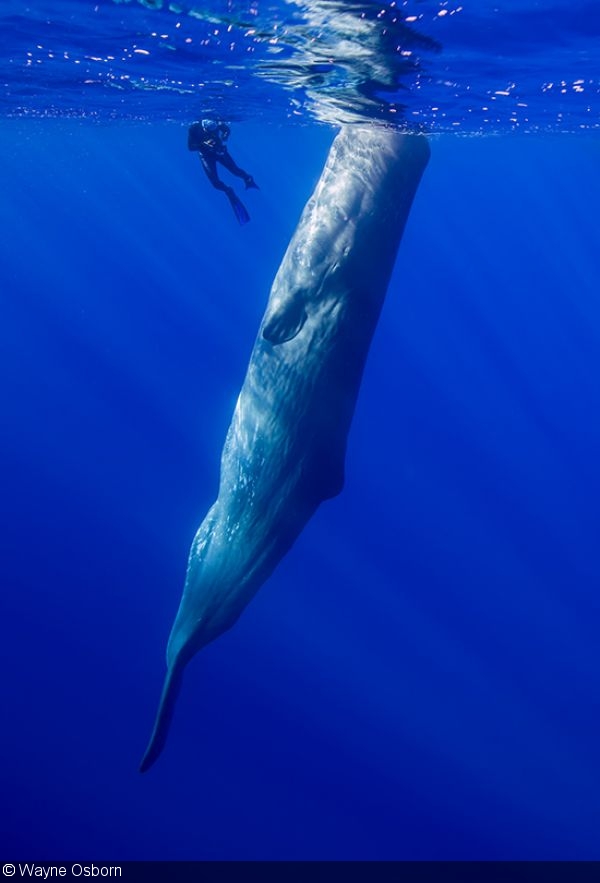 Lens Selection: I have found that a zoom with the range 16–35mm (35mm equivalent) covers the territory well. If I can get close enough, I will use 16mm. I try to have the least amount of water between the camera and the subject, as this makes a huge difference to image quality. The ability to zoom to longer focal lengths is helpful for shy or flightier whales.

Dome Port: The type of dome port largely depends on the conditions and your photographic goal. For example, if your encounter with a whale is limited to freediving, you’ll want a mini-dome to help reduce drag. But if you have the luxury of being on a scuba setup, larger domes provide better image quality and can also be used for split shots. One other option is to invest in a lightweight, durable surf housing if your encounters are limited to snorkeling or freediving. 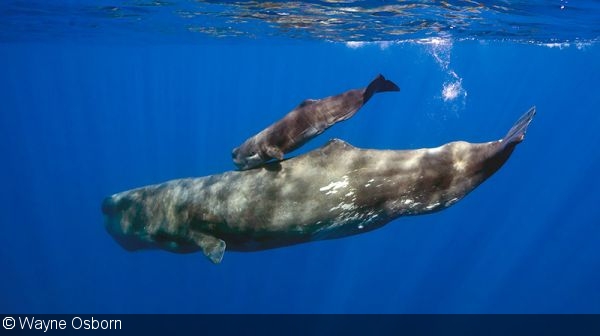 Add a Viewfinder: It is worth considering adding an external viewfinder to your housing. Many interactions are short and need fast reaction times. Trying to keep a horizontal water surface and not cut off parts of the whale in the frame while in the heat of the moment can be quite challenging. An external viewfinder can give you a bit more of an edge.

Use a GoPro: If your rig is negatively buoyant, a wrist leash is a very good investment. Sticking a GoPro or similar small video camera on the housing is not a bad idea. I mount mine with an adhesive mount on top of the dome port hood. This provides quality B-roll footage. 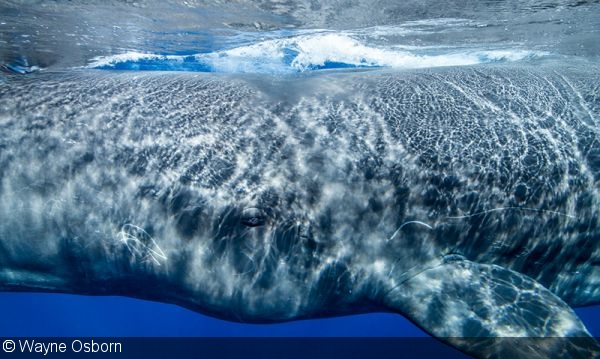 Eye to eye with a male sperm whale, Azores

I like to have my camera preset when I hit the water—just in case there is a chance encounter right off the bat. This initial setting will generally be at 1/100s shutter speed while in shutter priority mode. The ISO largely depends on lighting conditions, but ISO 400 is a good start. In terms of focusing, go with your fastest continuous frame rate (ideally at least 4–6 fps) in continuous shooting (AI Servo) mode.

The vast majority of whale photography will be done without strobes. As such, s shutter speed of 1/100s should safely stop motion for wide lenses and if light is in short supply you can extend this to 1/60s or longer, depending on how fast the subject is moving.

I can generally get apertures of f/11 or f/8 (clear water and high sun position). I will check the histogram and shoot in manual if needed to ensure I don’t blow out the highlights—this can be a problem at the surface. That said, keeping the histogram to the right helps keep noise down when processing the final image. LCD screens can be misleading underwater: hat’s why the histogram is the best check.

I will sneak the ISO down to 200 if I can maintain a reasonable f-stop. If I go deep or am working in early morning or late afternoon light, the ISO may need to go to 800. I am more conservative than most and try and shoot at the lowest ISO I can.

By setting the camera to continuous drive, I have the flexibility to squeeze off a single frame or fire a burst. I activate the autofocus from the AF button on the camera back (back button focus) so I can lock the focus point at any time (by taking my finger off this button) and recompose or just hold the button down for continuous AF.  My housing allows operation of the AF button with my thumb. The AF function on the shutter button needs to be turned off for back button focus.

If the action is moving very fast, the safest strategy for autofocus is just to activate all AF points and let the camera focus on the part of the subject that is closest to the camera. For a whale approaching head-on, this may mean the eyes may not be in focus though. In sperm whales the eyes are one-third back on the body. Getting familiar with your gear, honing a technique that works for you, is the best bet. 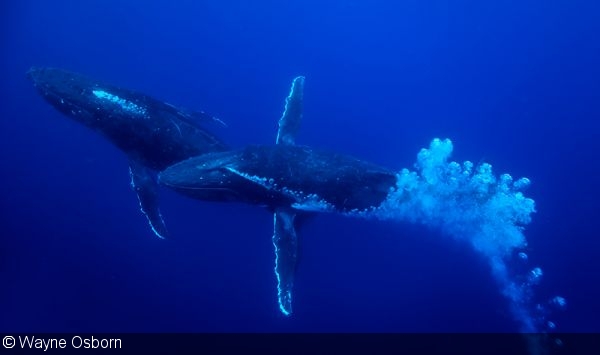 In-Water Technique: Getting in Position

For whale photography, pressing the shutter is the easy bit. It’s getting in the right position that presents the most challenges. This is really the make or break factor in whale photography.

I call this one the fighter pilot rule. If water visibility is poor, having the sun over your shoulder helps enormously with image quality. However, you may have to fight the whales to get there. I often wondered why, given a choice, whales would often approach from the direction of the sun. That was until the penny dropped. They were just trying to protect their approach and get a clearer view of me. Classic instincts from a predator imbued with hunting skills over the millennia. Good luck in outsmarting them!

The second rule is rather banal in its simplicity: you can’t outswim a whale. This means intercepting them if they are travelling and as they approach it’s very much their decision as to whether they avoid you or not. If the decision is to avoid you, they are very adroit at disappearing quickly. The best outcome is when they are curious or indifferent. 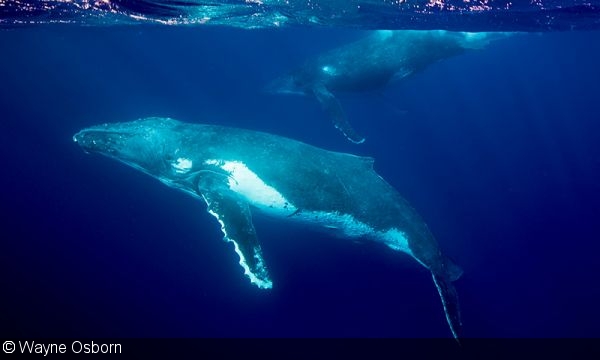 If you are diving or swimming with a chaperoned group, there will be good advice from the leader on positioning and approaching whales. It varies with species but the best encounters are when the whales are curious and come to you.

That’s how it works for dwarf minkes on Australia’s Great Barrier Reef. Divers hang on a line trailing behind the boat. Conditions are often breezy with a current running. Slipping an arm through the rubber slings provided allows you two hands free to operate the camera.

I have dived with sperm whales more than any other species so here’s what has worked for me. This encompasses my third rule—don’t spook the leviathan. I try and slide into the water, without splashing, and fin out to the approach line of the whale without breaking the water with my fins. Sperm whales rely on acoustics for social communication and hunting, so quiet is good.

When I judge I am in the whale’s line of travel, I pull my elbows in and my knees up to reduce my target size. Hopefully I have preset the camera correctly. It’s now time to get your shots—closer is better but remember, the last bits of the whale to pass by are the flukes. Even accidental contact is not worth contemplating.

My last bit of advice is the luck and time rule. The more time you are on and in the water, the luckier you get. When you are dog tired, the skies are gray and you know you have to belt into chop for two hours to get home—stay out. The very next encounter may be the best you have ever had. 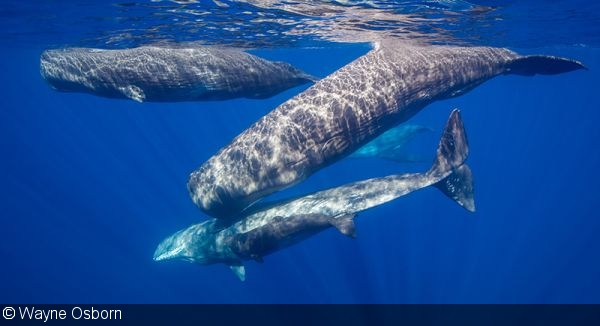 A sperm whale family with a newborn calf, Azores