It was during a trip to Cenderawasih Bay on Papua’s north coast in Indonesia that I really got into photographing reef fish.

This unique bay has been cut off from the outside world by large landmasses several times over the past several million years, and subsequently new species have evolved in isolation. This environment fascinated me as both a marine biologist and underwater photographer. I set out to document as many of the indigenous fishes as I could during my once in a lifetime visit. 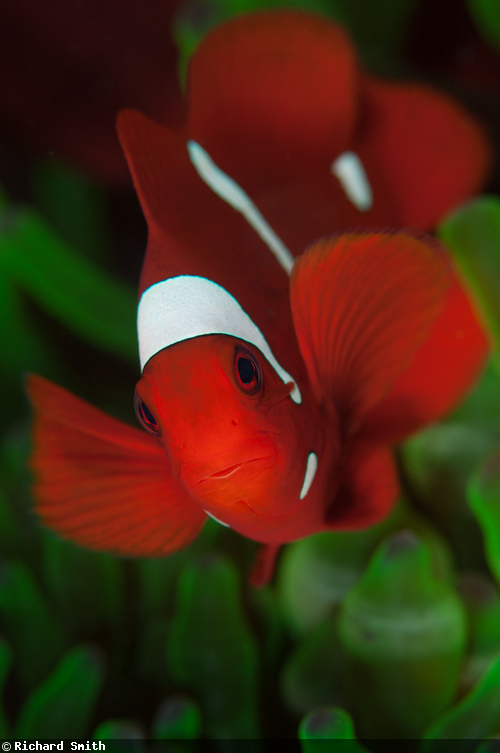 In hindsight, I have overlooked how rewarding reef fish photography can be.  I often spend my dives searching for small, hidden fishes such as pygmy seahorses, ghost pipefish or frogfish, completely ignoring the beauty of the more common wrasses, damsels and parrotfishes.  While they may be common and often out in the open, that doesn’t make them unworthy or easy photographic subjects. 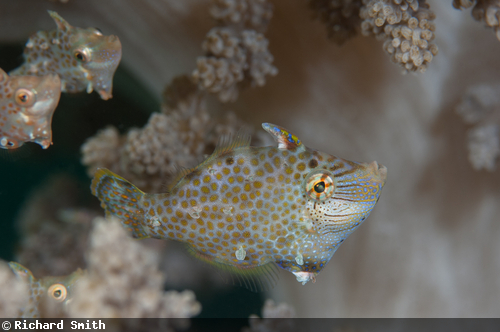 The beauty of reef fish photography is that specialised and expensive macro or wide-angle lenses aren’t necessary and the standard lens of a compact camera will often do the trick.  I use a Nikon DSLR and my lens of choice for shooting reef fish is the 105 mm macro lens.  This isn’t for the macro function per se, but I find that for many medium sized fish the extra distance from the subject allows you to take shots without spooking the animal. 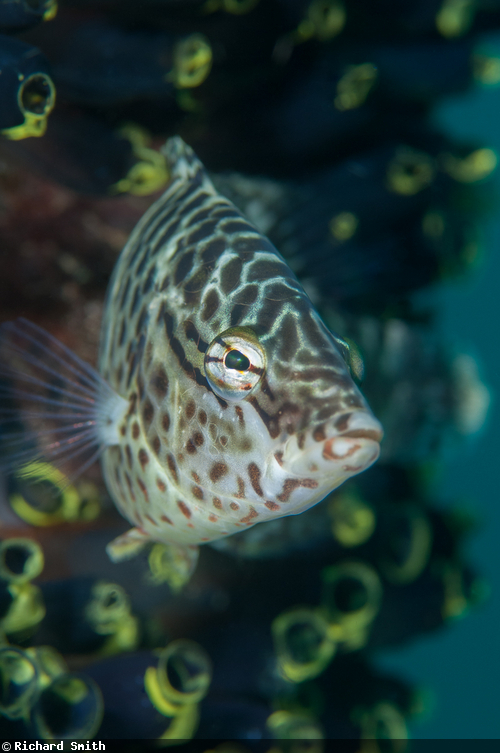 The distance from the subject is greater than it would be for macro, which makes lighting something to keep in mind. The trick is to provide enough artificial light to avoid a cyan cast without blowing out the subject. As always, you’ll want to be mindful not to illuminate the space between the camera and the subject, as this will show up any sediment in the water as backscatter.

Since each individual and species is different, take some time getting to know the routines and behaviours of the fish before starting to take shots.  This gives you time to estimate the distance you’ll be from the subject and position strobes accordingly.  Trying to take photos and then stopping to readjust everything will more than likely spook the fish and send it dashing into a nook. 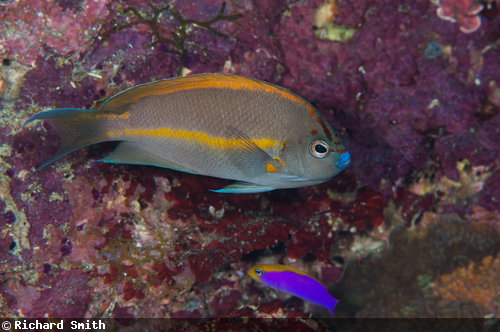 It isn’t easy to get a good shot of a reef fish, and several factors must be taken into account:

Buoyancy: Maintaining good buoyancy while photographing active fish is paramount.  They will often be much more active subjects than you’re used to and I have found that following them while looking through the camera’s viewfinder is the only way to catch them in action.  This means that you must have a good command of your buoyancy and sense of surroundings to prevent crashing into and breaking the coral or other substrate. 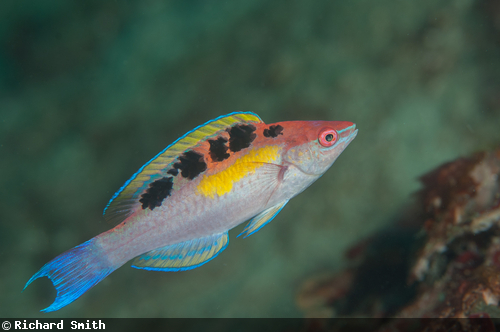 Something Different: There are many different styles of photo that you can take.  For a fish you can’t identify, a more typical ID shot of the full body may be the aim.  For the more common species it’s nice to experiment.  Try slowing the shutter speed to get a little blur into the shot, adding some action.

Playing with depths of field, by adjusting the aperture, can give nice images. With a shallow depth of field where the eye is in focus, a blurred, pastel coloured, background can be attained. Alternatively, a much greater depth of field can be used, where the background will be darker and much more of the fish in focus. Fish portraits provide a lot of creative control for the photographer 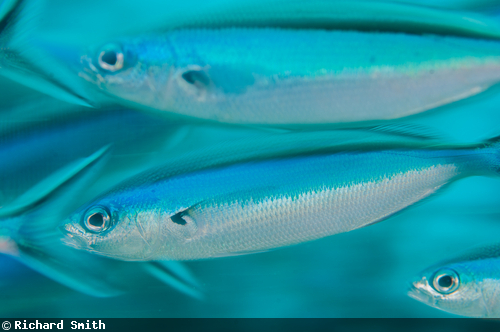 Set the Scene: A simple fish portrait can be so much more by telling you something about the animal.  Showing the fish in its habitat or behaving naturally gives the image life and the subject a character.

Background: A cluttered background can be extremely distracting.  You can either solve this problem by waiting until the fish swims into an area with a neutral or far way background, or alter your settings to get a shallower depth of field.  Personally, I like the shallow depth of field approach as it allows you to shoot against most backgrounds and lets more light into your shot. You need to be spot-on with your focus though, as you’ll want to get the eye sharp, and a reduced depth of field will make this harder. Apertures between 4-7.1 are prime for this shallow depth of field bokeh technique. 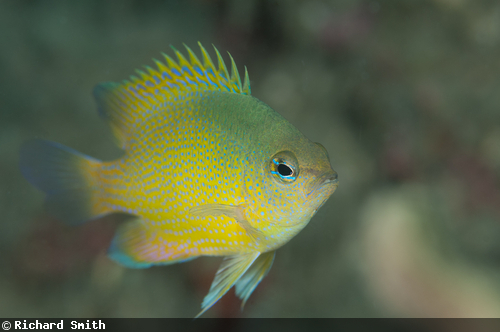 Fish Posture: I have found that having the fins of the fish in an erect, alert-looking position makes a huge difference to a portrait. It also gives the animal a larger surface to show off its colours.  Unless it’s your aim, be sure not to accidentally crop parts of the fins off though. 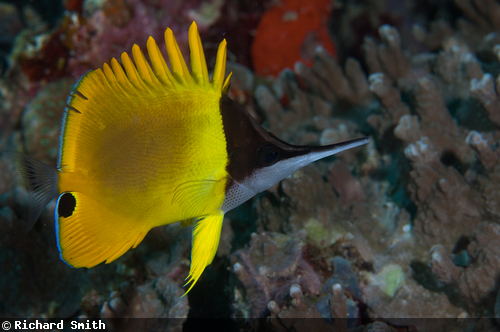 An Insider Tip: Some of the shots in identification books, particularly of new species, are taken of dead fish with their fins chemically fixed open.  Don’t be disheartened if it takes a while to get the perfect shot. With patience, you’ll get there in the end.

Setting Goals: Photographing reef fish opens many new avenues of possibility.  You can set yourself goals, like shooting all the life stages, geographic variants or colour morphs of a given species.  Setting a long-term goal, which certainly some ichthyologists aspire to, of for example shooting all the butterfly or angelfishes in your local dive area. 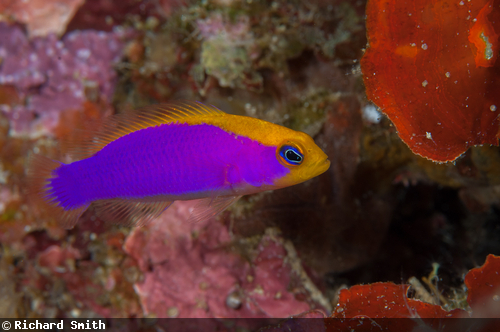 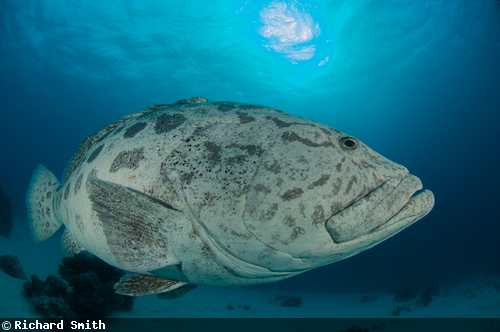 Reef fishes are beautiful, challenging subjects that are well worth spending some time to photograph.  Whether you set out to shoot a few of the fish that take your fancy or have certain rare species as a goal you can rest assured there will always be a subject for you to shoot. 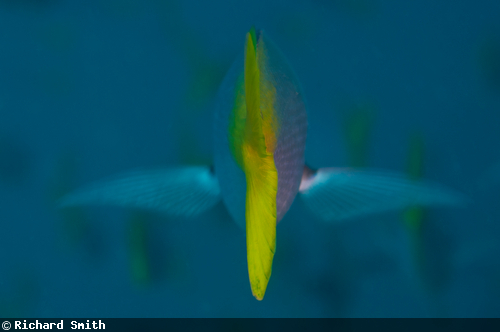 Richard Smith is a British marine biologist and photojournalist who aims to inspire a passion for the ocean and raise awareness of marine conservation issues through his images. He has been diving since 1996, which began his fascination with the sea.  In 2011, he completed a PhD in the biology and conservation of pygmy seahorses.  Richard leads marine life expeditions where the aim is for participants to get more from their diving and photography by learning about the marine environment: www.OceanRealmImages.com