In Dominique Taddei's book "USS Corsica" he mentions that during the latter period of World War Two the US Army Air force turned the small island of Corsica in the Mediterranean Sea into what can only be described as a lattice of airfields. From the air it was said to resemble the shape of an aircraft carrier, hence the name.

Well with all that history, the temptation was simply too great to resist, so in the summer of 2007 my wife and I set off hunting for the wrecks of USS Corsica. 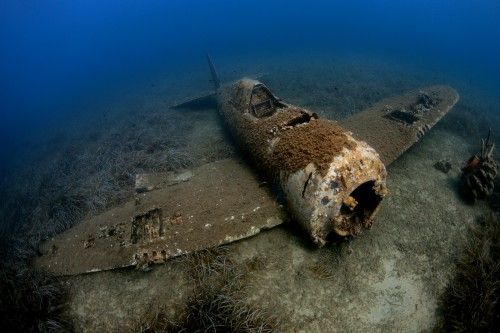 Location: Bastia, Island of Corsica, Mediterranean Sea.
Equipment: Canon EOS 5D with an Aquatica housing, 8 inch Dome Port, Sigma 15mm Fisheye. Settings: ISO 100, 1/50, f/5.6 AWB
The Idea
My passion has always been diving and photographing wrecks, in particular those with a history. In my opinion it’s the history that makes a wreck special. To create good images it’s not about swimming around randomly photographing parts of a wrecks structure, although I do concede this can occasionally produce the odd good result. The most important thing for me is that the images should attempt to tell the story, or at least capture the atmosphere of a wreck. This is what makes a wreck image special.

Putting your ideas into practice can be a little more difficult. For example, we have all heard it: research the site, identify the key areas of interest, make repeated dives until you are happy and you have obtained the image(s) you require. Great advice if you have the luxury of staying at the same site for extended periods. But for me, 90% of the time this just isn’t practical.

I am not a professional and take most of my photographs whilst sharing dive boats with a mixed bag of other divers, most of them not photographers. Therefore I am usually only able to dive a site once.  This has meant I have had to learn to be a little bit more adaptable in order to maximize my returns. So instead of a single focal point, I usually have to come up with a few ideas for images, that I can potentially capture on a single dive.

The idea for these images may be very specific, if I know the site, but usually, they are modified and adapted once down on the site. In general, I usually like to capture a large wide angle image, taking in as much of the wreck as possible (visibility permitting), complemented with some closer stuff using a model and/or strobes. My wife Heather is fantastic as she has modeled for me quite a lot and usually knows exactly what I want from a image, with the result that we can be more adaptable on the site.
The Shot

Thinking specifically about the P-47D, when we found our wreck and planed to dive it, I was aware that it was largely intact and the visibility was expected to be quite good, well good enough to be able to capture the whole aircraft. On the morning of the dive I woke to find some good early morning sun and a flat calm sea. I debated whether fitting a filter might be the best option for the ambient shots, but decided against it, as the light might not have been good enough at 22m. I also wanted to use my strobes on the dive to get a couple of CFWA/model shots afterwards, so decided to leave the filter for another day.

For the image I decided to use only ambient light and shoot in RAW, using AWB and making fine adjustments later using ADOBE’s RAW converter. I decided to shoot RAW with JPEG, using the JPEG image draft to compare in camera approximations for any subsequent color correction.

The camera was set on manual as I find this allows more control over my images. When deciding on final settings I fired off a couple of test shots until I was comfortable with overall brightness, contrast and color tone. 1/50 was enough to ensure a sharp image, f/5.6 give me reasonable depth of field and acceptable edge sharpness.  I also decided to use ISO 100 in order to keep noise to a minimum, although I could have easily gotten away with ISO 200.

About the Author
Jim Garland is a specialist wreck photographer from Ireland, although now based in the UK. Since 2001 Jim has travelled far and wide in the search for unique wreck images. His work has won many awards and been widely published in magazines such as DIVE, DIVER, SPORT DIVER, PHOTOGRAPHER, OUT THERE etc. Most recently Jims images have been used by UNESCO, in order to raise awarness of world underwater heritage. You can see more of Jims work on his website WRECKSHOT.COM.