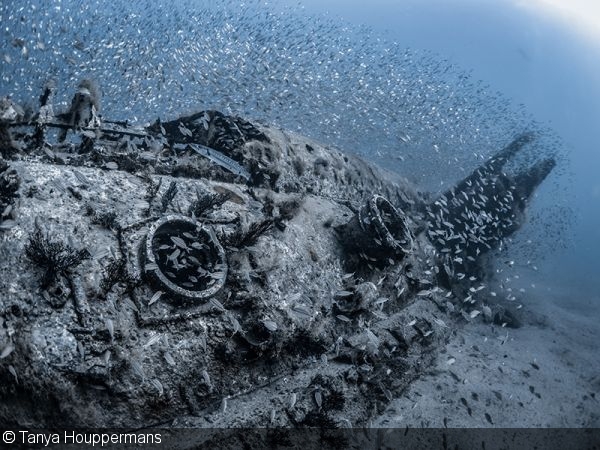 Few subjects in underwater photography provoke as much fascination and interest as shipwrecks. Whether a small tugboat or a massive ocean liner, the photo of a ship surrounded by water instead of its usual place on the surface tends to immediately catch the eye of the viewer. But wrecks are so much more than wood or metal structures resting on the sea floor; they are also artificial reefs that provide an environment where marine life can thrive.

I particularly enjoy capturing wide-angle images of the animals that live on or frequent these wrecks to show just how vibrant and dynamic the community around a shipwreck can be. There are some inherent challenges to photographing living creatures in and around shipwrecks, so let’s take a look at some key points to keep in mind. 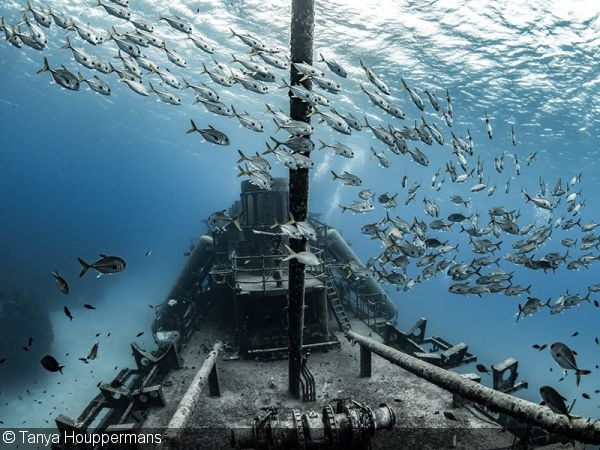 The wreck of the Kittiwake off Grand Cayman sits in only 65 feet of water, allowing plenty of ambient light to permeate on a sunny day. Using a shutter speed of 1/200s and an aperture of f/5 freezes the motion of the school of jacks while letting in enough light to properly expose the wreck

Photographing large portions of a wreck while including the animals swimming around it is an intricate balancing acting between lighting and shutter speed. Since strobes are of little to no use when photographing an object as large as a shipwreck, we have to depend on the available ambient light. As a general rule, I try to keep the ISO as low as possible (usually 250–600) to prevent a grainy image, and I adjust the other settings around the ISO.

Slowing the shutter speed will increase the amount of ambient light hitting the sensor, but slow it down too much and you risk blurring the animals swimming by. Increasing the shutter speed will freeze the movement, but increase it too much and you risk underexposing the image. I find that opening up the aperture to between f/6.3–f/3.5 works well to properly light the wreck, while maintaining a shutter speed of at least 1/100s results in images that are optimally exposed with little-to-no motion-blur of the animals. 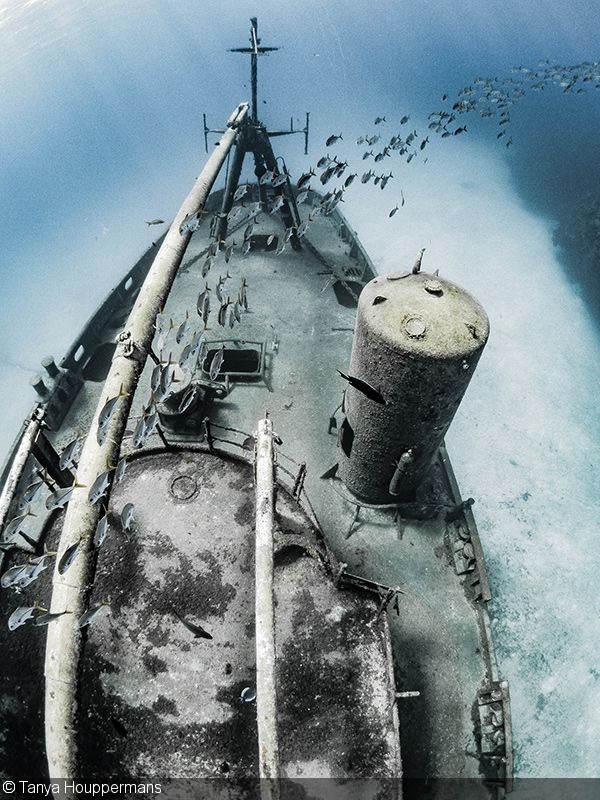 Sometimes it’s okay to break the rules! We’ve all heard about not shooting downward, but in this case it makes for a more interesting composition as we follow a school of jacks over the stern of the Kittiwake

The Wreck as a Stage

Wrecks can also be used as a backdrop when the main subject of the image is the marine life. This creates a much more interesting composition than if the animal were simply surrounded by blue water. It also adds the elements of depth and space to the image, and gives a sense of scale. The goal is to illuminate the subject in the foreground using strobes without overexposing or underexposing the wreck in the background.

Since my own personal preference is to freeze the motion of the animal, I use a higher shutter speed (usually between 1/200s–1/320s), and then open up the aperture fairly wide to between f/5–f/3.2 to compensate for the fast shutter speed. If you shoot in manual mode for your camera and strobes, like I do, then your light meter will most likely show that your image will be slightly underexposed. Don’t let this bother you. Concentrate on proper strobe power and placement to illuminate the subject in the foreground. The wide aperture will help to ensure that the background areas of the wreck where strobe light can’t reach are properly lit in your image. 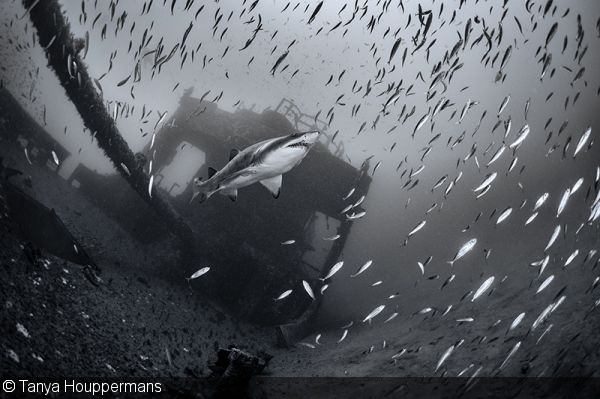 The USCGC Spar was intentionally sunk off North Carolina in 2004 as part of an artificial reef program. In this image, strobes were used to illuminate the shark and bait fish in the foreground, while a wide aperture of f/3.5 provided enough ambient light to properly expose the wreck in the side and background of the frame 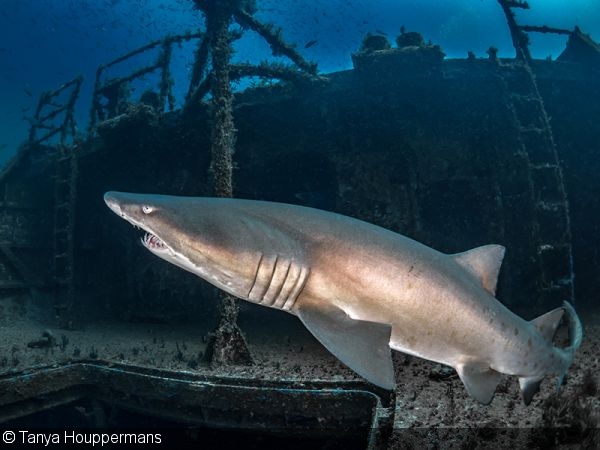 Here, the slightly underexposed shipwreck creates an intriguing, and somewhat haunting, background for the sand tiger shark swimming over the deck of the Spar 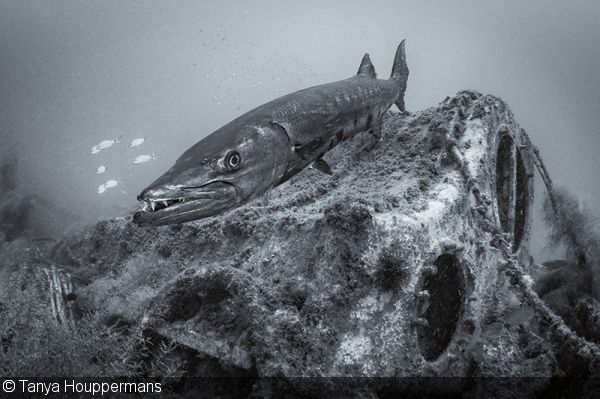 An otherwise simple portrait of a barracuda is much more interesting due to its position slightly above a section of the wreck of the freighter USS Schurz, which sunk off the coast of North Carolina in 1918 after it collided with another ship

Anyone who is not properly trained should never attempt wreck penetration, especially considering the added complexities involved in operating a camera in this environment. But if you are experienced in wreck diving, photographing marine life inside of wrecks can result in some truly unique images.

One of my favorite locations for wide-angle photography of animals inside shipwrecks is off North Carolina, where the resident sand tiger sharks are frequently seen lazily meandering throughout the wrecks. When approaching the interior area of a wreck, try to stay low and be sure not to block any potential exit for the shark. Move slowly and deliberately so that you don’t appear threatening to the shark, and also so that you don’t stir up silt. Once inside the area, I find that staying in one spot and allowing the sharks to move toward me works best.

There is typically very little ambient light, so strobes are critical for proper illumination. Be careful not to set the strobe power too high though, especially if you are in a smaller enclosed area, since the flash can bounce off of the walls and overexpose the image. Shooting slightly upward gives the most favorable results, since you can take advantage of any ambient light coming through the top or side of the enclosure. Also, from an aesthetic standpoint, photographing the shark from an angle as opposed to straight on tends to produce a more dynamic and interesting composition. 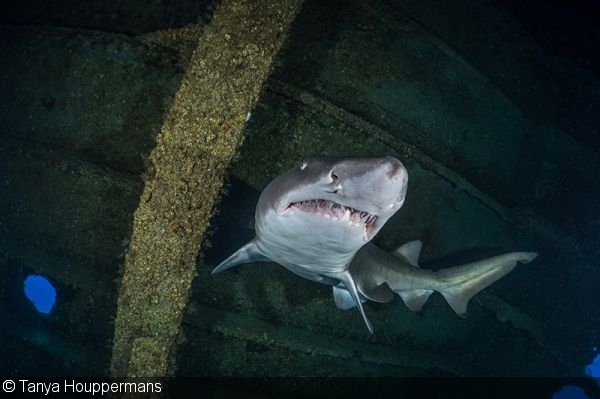 North Carolina is one of the few places in the world where finding sharks inside shipwrecks is commonplace. Here, a sand tiger shark circles inside the wreck of the tanker Papoose 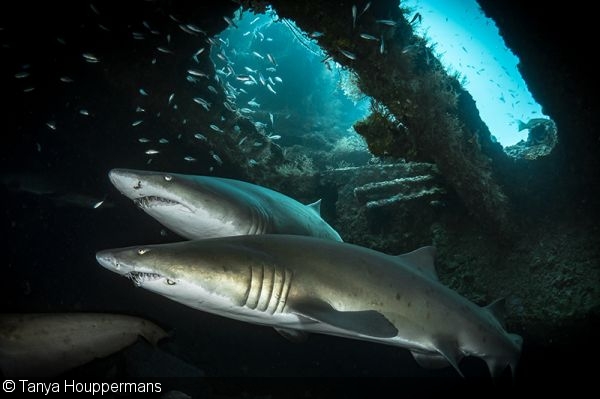 Two small openings in the wreck of the freighter Caribsea allow some ambient light to pour in, which, when combined with strobe light, helps to nicely illuminate the sand tiger sharks swimming inside

When most people think of a shipwreck, they think of a barren, desolate structure lying on the bottom of the sea. But as divers and underwater photographers, we know that wrecks are often teeming with life of all shapes and sizes. These creatures all depend on the wreck, whether as a home, as protection from predators, as a hunting ground, or as a stop along their migratory route.

With some planning and patience, wide-angle photography allows us share the stories of the connection between a shipwreck and its residents, and to show the value and importance of these artificial reefs to the ocean ecosystem. 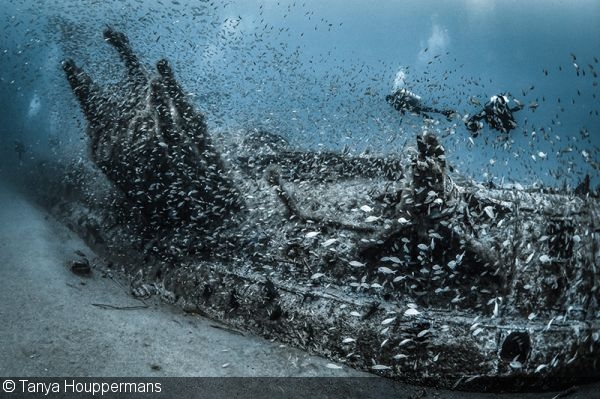 The German U352 lies in 110 feet of water off the coast of North Carolina. Including divers gives a sense of scale to the wreck and the thousands of fish that call it home

Ben Farouc wrote:
Good location for the shoot...i see that it's the best picture

AlexandraSauro AlexandraSauro wrote:
So beautiful
You must be logged in to comment.
Support Our Sponsors
Advertise With Us
Newsletter
Travel with us