In this latest article in The Guide, underwater photographer Tanya Houppermans recounts the joyful experience of seeing her autistic son meet his first whale sharks and manta rays. 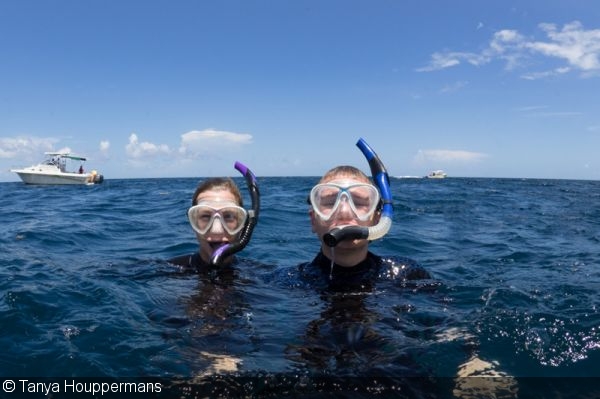 When the first whale shark appeared, Richard had a huge grin on his face as he watched the shark swim by.

Only a few years ago, I never could have imagined that my 18-year old son, Richard, would ever become a certified scuba diver. Richard has autism, which has resulted in his having difficulty with verbal communication. Even though Richard had always been very comfortable in the water, and even enjoyed snorkeling in the swimming pool, I assumed that scuba diving was out of the question.

All of that changed two years ago when my local dive shop was willing to take a chance and allow Richard to take a PADI Discover Diving class. Within an hour of first donning a regulator, Richard was swimming in the deep end of the pool in full scuba gear, completely at ease. Thanks to the Handicapped Scuba Association, Richard earned his Open Water scuba certification, and is now able to join my husband, Scott, and me on our dive adventures. 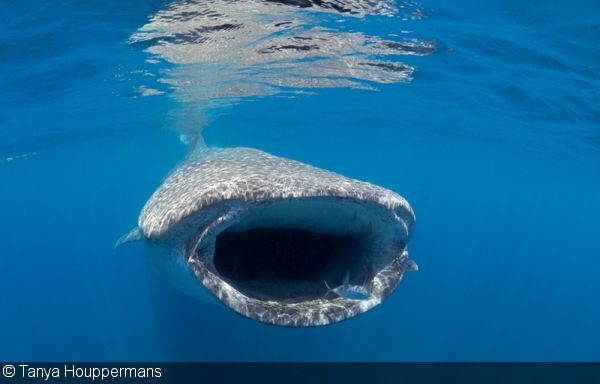 Although it appears that this whale shark is about to devour the fish in front of it, these behemoths are really only interested in eating tiny plankton and fish eggs

My husband and I felt confident that Richard was ready to snorkel in the open ocean with these massive animals. Richard had already been scuba diving in the ocean in Bonaire, he had dived with sharks at the North Carolina Aquarium at Roanoke Island, and he had snorkeled with manatees in Florida. From early on, Richard understood not to touch the animals, and he was always careful not to do anything that might scare them. That usually had the effect of the animals coming closer to him because they didn’t fear him. Richard loves these interactions, which is always evident by the huge smile on his face.

We prepared Richard for the trip to Isla Mujeres the same way we did in the past, which included showing him pictures of the animals that we would see on the expedition. Richard, like many autistic people, is very visual; he learns best by seeing something rather than being told about it. We also try to incorporate language by telling Richard about the animals he will see, and then asking him questions about what he has learned. He takes a lot of pride in being able to identify the things he sees in the pictures. 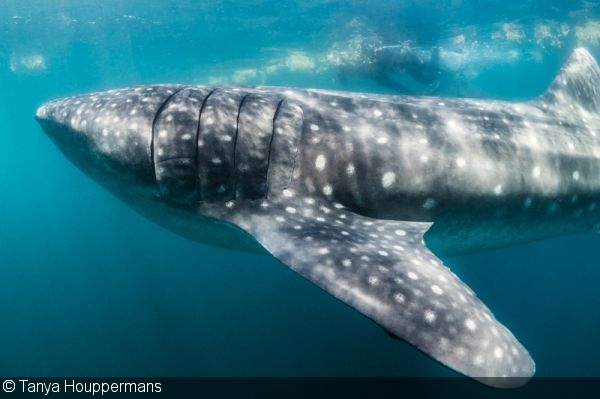 Richard and his step-dad, Scott, are dwarfed by a whale shark as it swims past just under the surface of the water 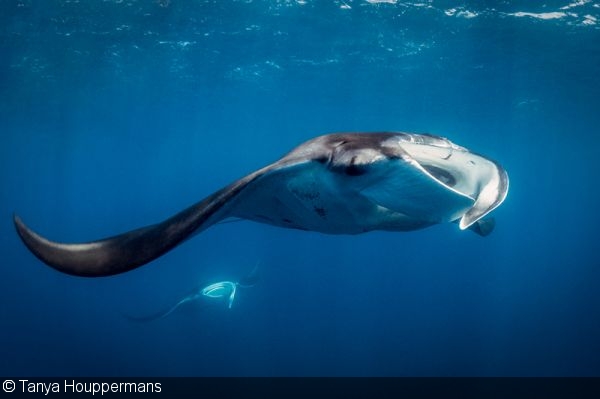 Two manta rays feeding in the waters off of Isla Mujeres

My son’s first day out on the waters off of Isla Mujeres was nothing short of spectacular. After a boat ride of slightly over an hour, we came to an area where whale sharks were feeding. Richard eagerly entered the water with Scott right by his side. Although Richard is quite competent in handling himself in the water, Scott and I always make sure that at least one of us is within arm’s reach of him at all times.

When the first whale shark appeared, Richard had a huge grin on his face as he watched the shark swim by. When Richard lifted his head out of the water, I asked him, “What did you see?” He responded with an enthusiastic, “I saw a whale shark!” Richard typically does not respond in complete sentences, so just hearing him say that was well worth the trip. 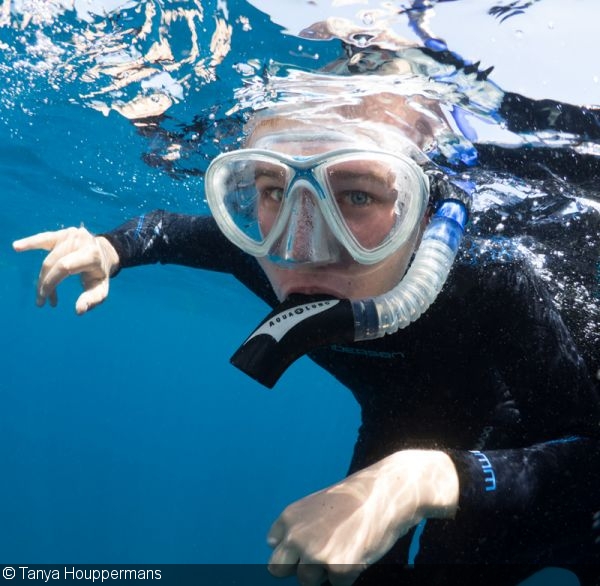 The next day, we were very fortunate to be joined by several manta rays. Again, Richard joyfully entered the water to snorkel with the mantas. After one of the groups of mantas had passed, I asked him again, “What did you see?” He replied, “I saw five manta rays!” It was such an incredible moment to hear him speaking in a full sentence, again with a broad smile across his face. 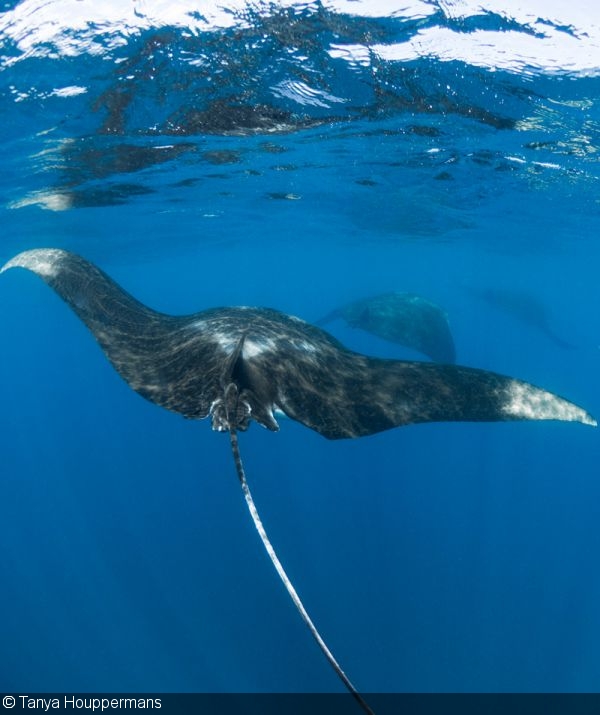 Three manta rays swim in a row. Tanya and Richard witnessed as many as five mantas following each other. They thought they’d be fortunate to see one or two during the entire trip

On what was to be our last day in the water, the seas were a bit rough, so we decided to scuba dive in Mexico’s beautiful cenotes. We ensured that the caverns were shallow and had plenty of areas to surface since Richard had never dived in a cavern before. As it turned out, he was very excited to get to scuba dive in the caverns, and he performed flawlessly.

The challenge for me as a photographer was taking good images of him in low-light conditions, but the camera I use tends to perform very well at higher ISOs. I had been disappointed that I had not been able to capture any close-up images of Richard next to the mantas and whale sharks; Richard suffered his first bout of seasickness the day before, which had cut short our time in the water together when I had planned on concentrating on close-up images. But seeing the thrill on his face after surfacing from the cavern dive, and seeing how proud he was of himself, quickly dispelled any disappointment I was feeling as a photographer.

Richard (left) and Scott (right) scuba diving in a cenote. Although cavern photography can be challenging due to the low-light conditions, increasing the ISO while with a handheld flashlight provides enough illumination

After returning home, I showed Richard the pictures I had taken during the trip. Whenever he would see himself in an image, he would excitedly say, “That’s me!” When he starts school again in a few weeks, I will give him the pictures to take to school to show his friends and teachers. That will also give him another opportunity to develop his verbal communication by expressing to others what he experienced.

I am so grateful to be able to share my love of the ocean with my son, and also proud that the images I take are helping him to learn to express himself. But when all is said and done, the biggest reward of all doesn’t require any words: His smile speaks volumes. 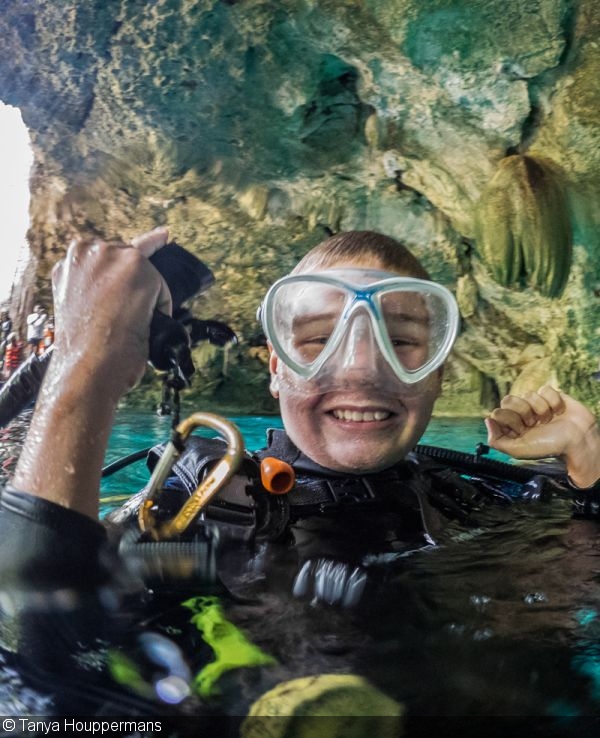 Richard just after surfacing from his first cavern dive. He performed flawlessly and had a great time!

To learn more about autism, or to make a donation for the cause, please visit the Autism Society. We also recommend supporting the Handicapped Scuba Association, which made Richard’s certification possible.

edouard mollard wrote:
the dream !
You must be logged in to comment.
Support Our Sponsors
Advertise With Us
Newsletter
Travel with us