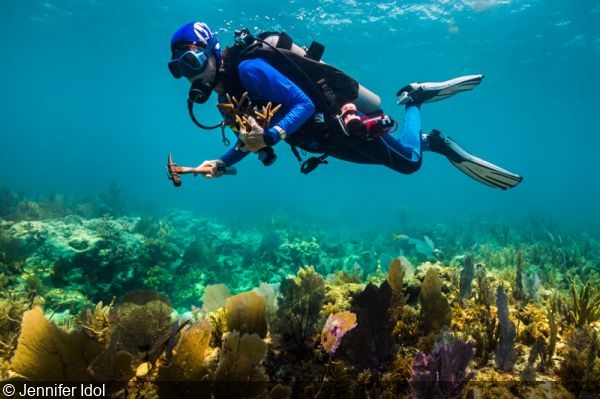 Contributing to positive action that restores reef life is an empowering and emotional activity. While it is a rewarding experience to know individual actions have great influence, it is equally difficult to face both the direct and indirect consequences of our behaviors. I joined Coral Restoration Foundation for their annual Coralpalooza on World Oceans Day to illuminate their important work.

The Age of Coral

Most of the Florida Reef Tract, the third largest barrier reef ecosystem in the world, lies within the Florida National Marine Sanctuary. This reef was created when the ice melted after the last major glaciation approximately 10,000 years ago. Since the 1970s, 97% of corals in this habitat have died.

As we near the extinction of many of the corals and wildlife supported by reef structure, it is apparent that this needs to be an age for change. How we respond to this crisis will directly impact not only the fate of these reefs, but also the oceans’ ability to provide us with life-giving oxygen created by marine plants and regulate our climate by absorbing carbon dioxide from the atmosphere.

Organizations such as Coral Restoration Foundation have been formed to address this plight. Their community structure helps us to positively influence our collective future by volunteering, getting involved in education programs, contributing through financial donations, or joining a Dive Program. 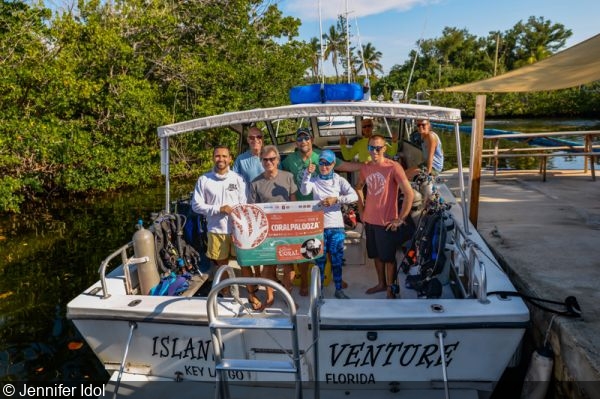 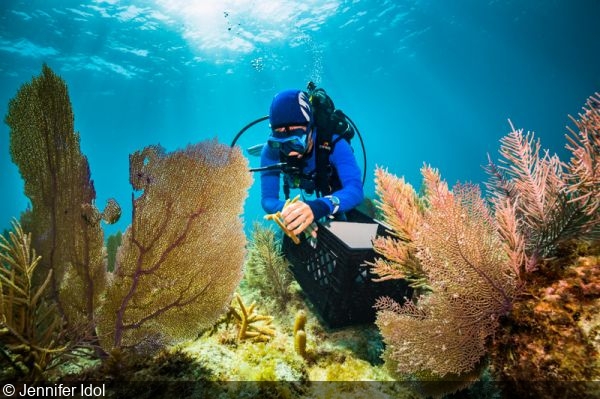 Staghorn corals are placed at their planting location

Hope Is in Our Hands

When terms like “mass mortality,” “critically endangered,” and “extinction” become commonplace, it can feel overwhelming and depressing. We may react to these feelings by putting them out of our minds, actively denying culpability, or simply not acting. Identify our behavior allows us to change it for the better.

In the 1990s, we responded to coral threats such as white-band disease and yellow-blotch disease by creating the Florida National Marine Sanctuary to provide resources that help manage these threats. Though no particular cause was attributed to the move, we learned that when the protective barrier of stony corals is broken, be it by divers or dredging, bacteria is then permitted to enter the soft tissue that is the living part of corals.

This massive die-off inspired Ken Nedimyer, longtime resident of Florida, to observe and learn ways to “outplant” and rebuild reef structure. He eventually founded the Coral Restoration Foundation, now the largest coral reef restoration organization in the world. This year, they held their fifth Coralpalooza, in which 1,760 corals were returned to the Florida Reef Tract. Their work continues throughout the year and is enabled through the support of the community that began in the Keys and has grown to global participants. 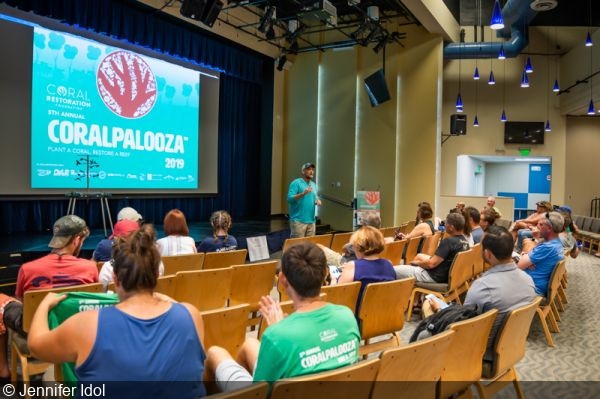 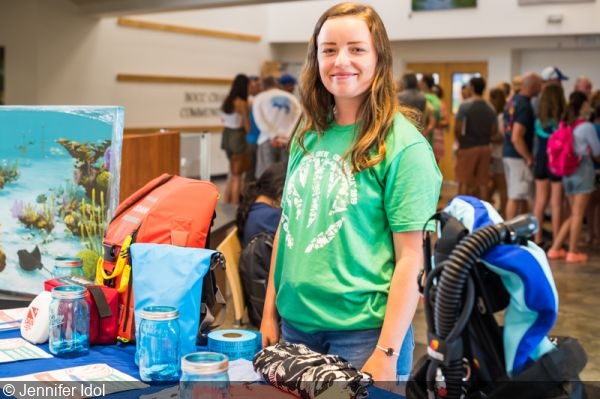 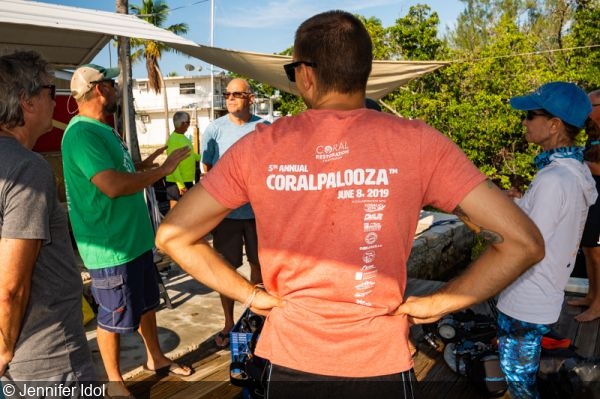 Holding an endangered species in your hands is a privilege few get to have. However, through the diving program with Coral Restoration Foundation, volunteers can participate in educational training and dives to plant these corals with their own hands. Volunteers are organized into teams that follow a process of harvesting corals from an underwater nursery and then transporting them to identified reef locations.

Dive leaders mix Apoxie to cement coral specimens to their new homes. This costly substance must be mixed correctly to ensure corals adhere to the rock and survive. Each coral is identified by genotype with a tagging system and recorded in its destination. 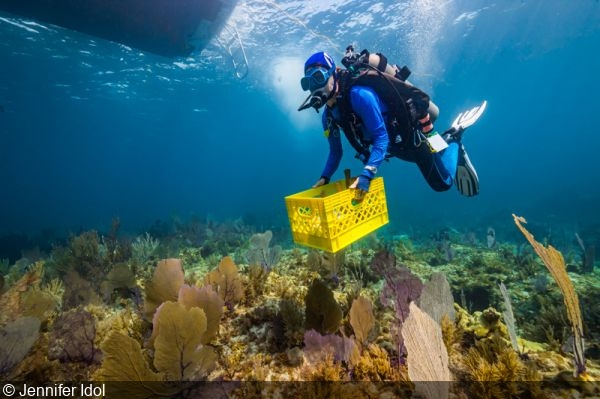 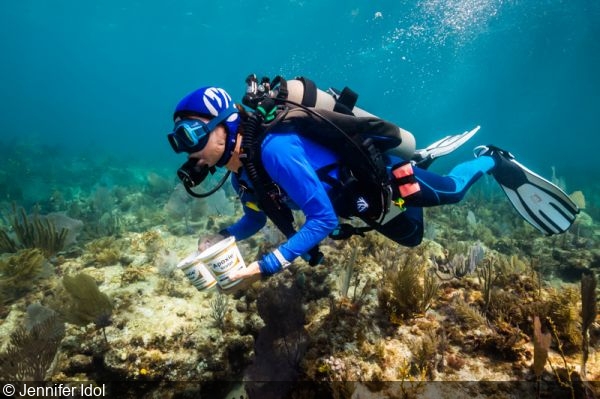 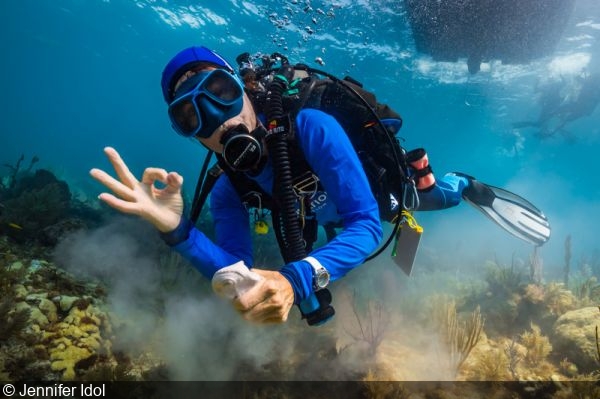 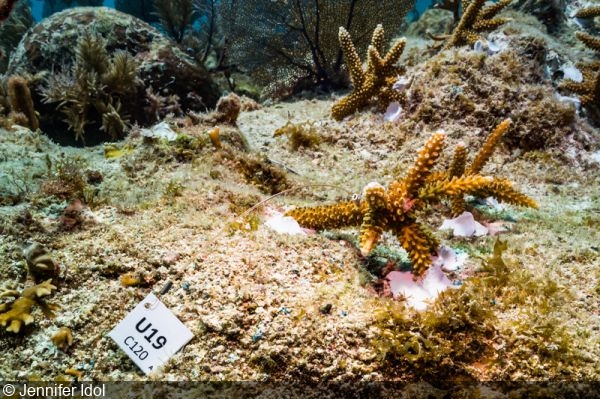 Planted corals are identified by genotype

Algae growing on attachment surfaces prevents corals from adhering to the limestone, so divers use chisels to clean planting areas before applying the Apoxie and pushing the coral in place. Fish often move into their new habitat before work is even complete.

Each coral is documented and photographed to monitor its growth rate and to help planting techniques evolve. Coral Restoration Foundation primarily works with staghorn and elkhorn Acropora corals. The organization aims to plant some 100,000 corals in the next three years. 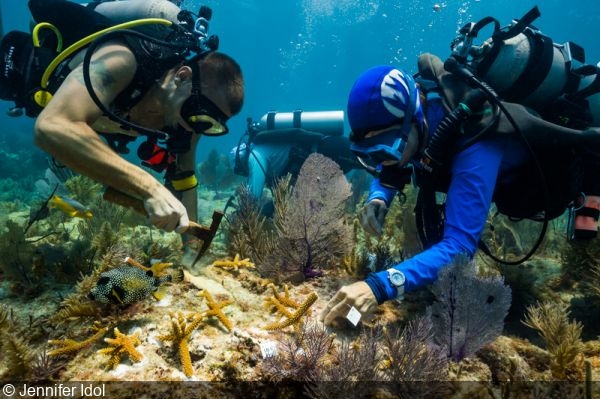 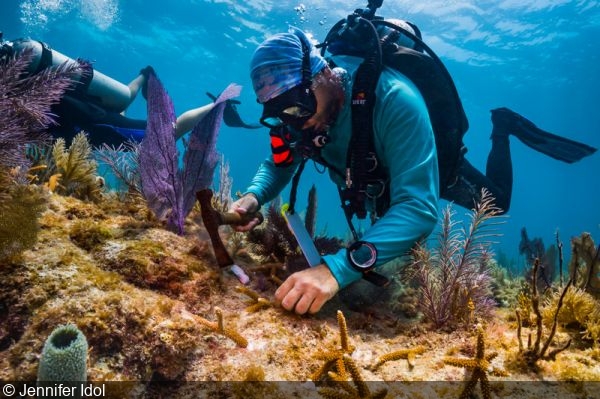 Divers use chisels to clear algae and continually check their work 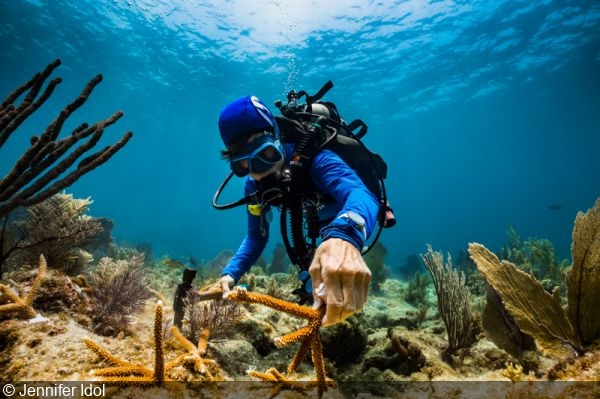 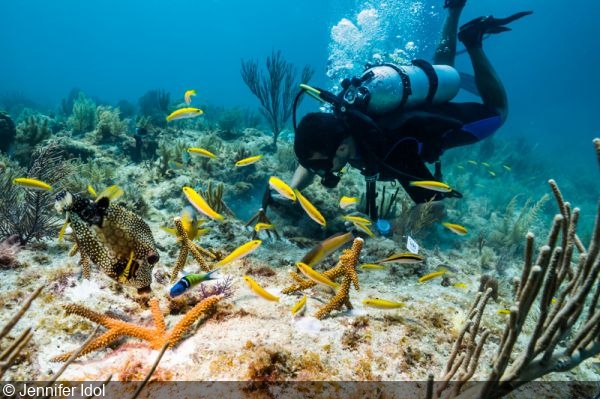 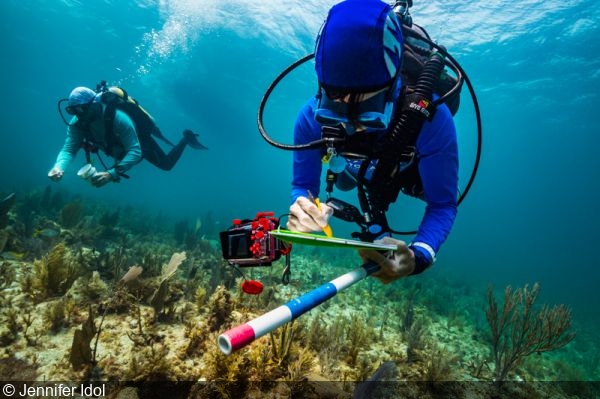 NOAA estimates that the total economic value of coral reef services for the U.S.—which includes fisheries, tourism, and coastal protection—is over $3.4 billion annually. More than 36,000 jobs are generated from coral reef activities, so the work done to help rebuild reef structure not only promotes reef life, but also the livelihoods that financially depend on coastal resources.

Corals thrive in a very narrow range of temperatures, which have been maintained by the escape of heat through our atmosphere. Greenhouse gases such as carbon dioxide and methane, which prevent heat from escaping, are kept in check by natural processes in forests and oceans. However, by engaging in the burning of fossil fuels for manufacturing and transportation, we are releasing more gases than can be controlled. This leads to the raising of water temperatures and to ocean acidification, which cause structural damage, bleaching events, and eventual death to reef systems.

In addition, pollution leads to poor water quality, while diseases such as stony coral tissue disease also threaten coral reefs. Other stresses include contact with reefs through boat anchors, prop dredging, boat groundings and propeller damage, and anchoring, as well as divers making contact with the reef. 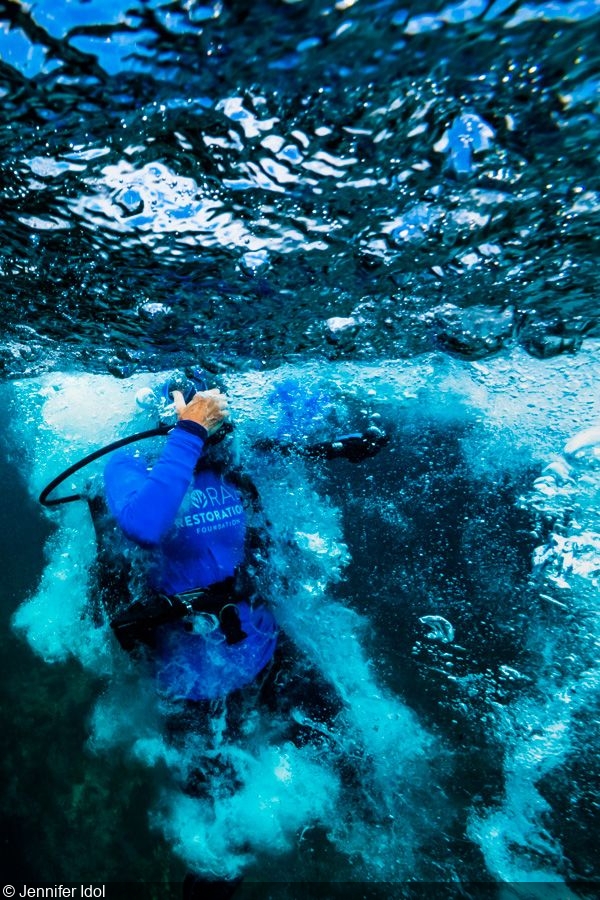 Take the plunge: Help restore the Florida Reef Tract as a volunteer for Coral Restoration Foundation

As individuals, there are simple steps we can take to help combat these giant issues by reducing our carbon footprint: creating less waste by using reusable materials instead of single-use products, purchasing a low-emissions vehicle, consuming less meat, and so on. As divers, we can also fight bacterial and chemical stresses on corals by using reef safe products like those made by Stream2Sea and by decontaminating our dive equipment.

As underwater photographers, we have the power to tell the stories of our waters through our images. We can demonstrate buoyancy control as we create images of subjects, including our dive buddies as they pose for photos. We can look without touching and take away photos without damaging corals. And it is important we create images not only of beautiful seascapes, but also of our damaged environments.

Our images help share the mystery of what lies below the water so others may come to love them as we do. 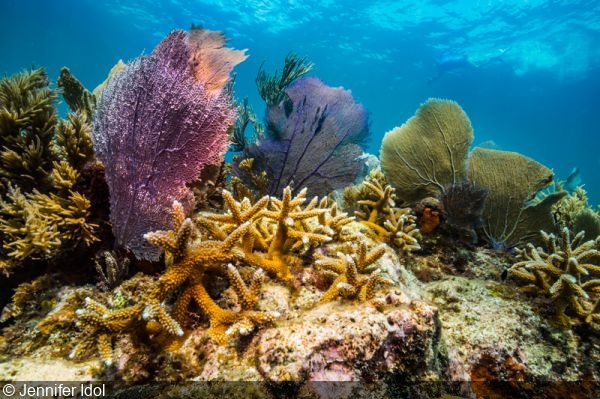 About the Jennifer Idol: Jennifer is a technical diver, instructor, and underwater photographer. She is the first woman to dive 50 states, an achievement captured in her book An American Immersion. She is a Nikon Professional Service member, PADI Ambassadiver (2017 and 2018), and a member of the Ocean Artists Society. She has been diving for 24 years and has earned 29 certifications. Her photography and articles are widely published in periodicals including Diver, Scuba Diving, Alert Diver, and Sport Diver. www.TheUnderwaterDesigner.com