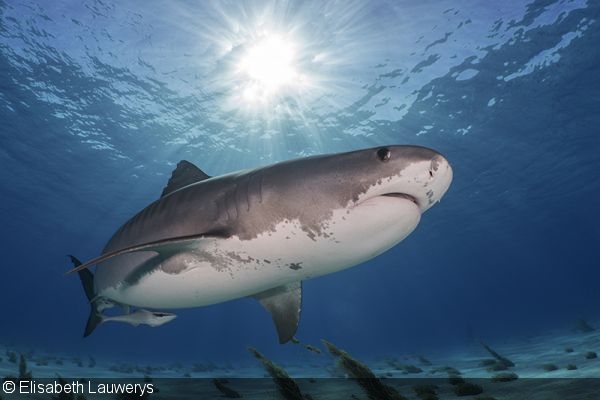 As a budding videographer, if you’ve ever looked into training courses to improve your underwater video skills, you’ve likely come across Elisabeth Lauwerys, our Videographer of the Month. Elisabeth created the dive industry's first professional-level video course (BSAC Professional Underwater Videographer), and you’ll find her running video training programs at locations like Koh Tao, Bali, and the Similan Islands.

Koh Tao is where Elisabeth runs Oceans Below Underwater Video Productions, whose various projects have been increasingly encroaching on her teaching time. Over the years, she’s collaborated with a number of production houses, including the BBC and Discovery Channel, on a variety of underwater documentaries, as well as working with PADI on refreshing their promotional and marketing materials. And when she isn’t putting her considerable energies into her day job, you’ll likely find her cutting together her latest video competition entry—to add to a number of international awards that her films have already bagged.

And it seems Elisabeth’s appetite for capturing all things underwater won’t be satisfied anytime soon. “The more I learn about what’s out there, the more I want to film,” she confesses. It sounds like we’ll be seeing plenty more from this talented moviemaker.

A highlight reel of Elisabeth’s work

It all started when I was doing my Advanced Open Water photo dive in the Philippines back in 1995. I immediately fell in love capturing this underwater magic on film. Within a few years, I had saved up enough to buy my own camera and was shooting away. In 2003, I rolled entirely by accident into underwater videography, and I realized what an inspiring activity underwater videography could be. I felt that with video, I could express my creativity more and capture the best moments in my dives. I love recording the emotional connections and interactions with marine life.

I have filmed so many great encounters in amazing locations over the years, and every single one was memorable. If I had to choose one story, I’d say it was when I started figuring out how to capture fluorescent night dives back in 2012. My short film Visions in Blue was the result of this new technique. In the beginning, we taped blue torches to the cameras and improvised to be able to get the shots. Later, with more sophisticated equipment, I filmed numerous fluoro sequences for productions from the BBC, France 3, and other production houses of scorpionfish hunting, coral spawning, etc. Every fluoro dive is as exciting as the first. You always see new colors, behaviors and inexplicable otherworldly stuff!

I think my favorite place to shoot is “macro heaven” Pom Pom Island in Sabah, Borneo. It is a remote little island with only two resorts on it. For a number of years, I was conducting my underwater video courses there a few months each year. The island is stunning and the best turtle encounters happen here, with up to 30 turtles per dive. Most of my dives were between 90 minutes and two-and-a-half hours! The fact I got to know the macro marine life so well there made it easier to shoot. However, I still have an ever-growing bucket list of new dive destinations. Next stop is Mexico for the Chinchorro crocodiles and then back to my second-favorite place in the world to shoot: Tiger Beach, Bahamas.

I am using a Sony a7r Mark II with a Nauticam housing and SmallHD monitor, with two 12,000-lumen video lights from SUPE. Also, for its compact capabilities and ability to output 4K, I use the Sony a6500 in a Fantasea housing. I use a lot of different equipment to shoot various scenes when I do promo videos— gimbals, blue lights and filters for UV, even a GoPro at times… 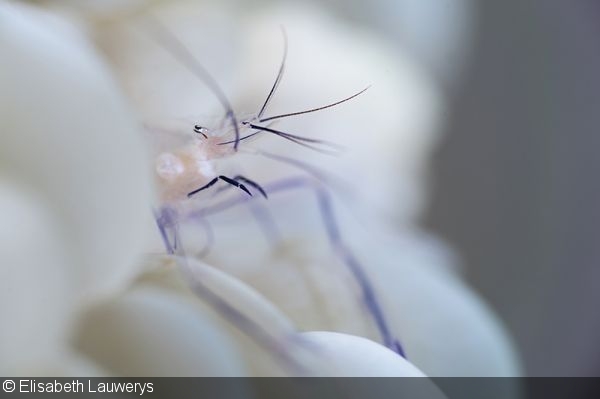 Malaysia’s Pom Pom Island has a special place in Elisabeth’s heart. Since 2012, this location has served as a classroom for teaching underwater video courses and a studio for filming PADI promo video. As well, she dives here to collect stock footage, learn about extreme macro photography, and participates in their annual photo competition. “Pom Pom Memoirs” is Elisabeth’s homage to this gem of an island

Working with various production companies for great documentaries, like BBC’s “Secrets of the South” or Discovery Channel’s “Wildest Indochina,” has been amazing, but also working with PADI and getting the freedom to create a new look for their promotional and marketing videos has been a great way of getting my name out. Of course, winning numerous awards for my videos, including a prize at the Festival Mondial de l’Image Sous-Marine in Marseille many years ago was a game changer for me.

All the time! In the past, more than now, since I have learned from those missed shots! It still happens from time to time that my camera is not set up correctly or things happen which I’m not expecting. But that’s the nature of this kind of filming: Nothing is staged and you have to be on the ball. There’s no reason to beat yourself up though, because there will be other great moments to capture.

Professionally, I do mostly film work for productions and I teach underwater videography; however, I love to shoot photos in my free time. I almost consider photography more as my hobby and passion, while underwater video is my job and passion. The good thing is that because I use a Sony a7R II, I can easily switch between the two.

An “amazing, beautiful experience” is how Elisabeth describes this encounter. It was her first night dive and snorkel with feeding manta rays. She was lucky enough to spend three-and-a-half hours with them in the water 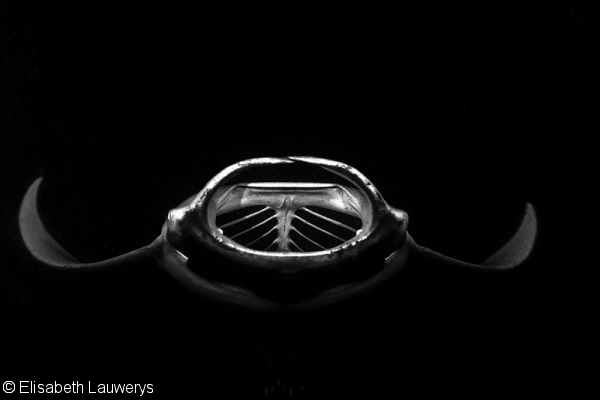 A manta ray feeding at night in the Maldives

Yes! Think outside the box. Be as creative as you can, and make a difference. We are the ambassadors of the sea. It is our duty to protect and fight for the environment in which we work. Edit your footage for the world to see. What people love, they will protect. Make it your mission to not only bring out your work and talent, but use this gift to save our oceans.

My list is still growing! The more I learn about what’s out there, the more I want to film. I want the world to know how beautiful and precious life underwater is. Through my videos and with a personal style, I am hoping to change people’s views about sharks, and other marine creatures, in the hope that they will help protect our seas. 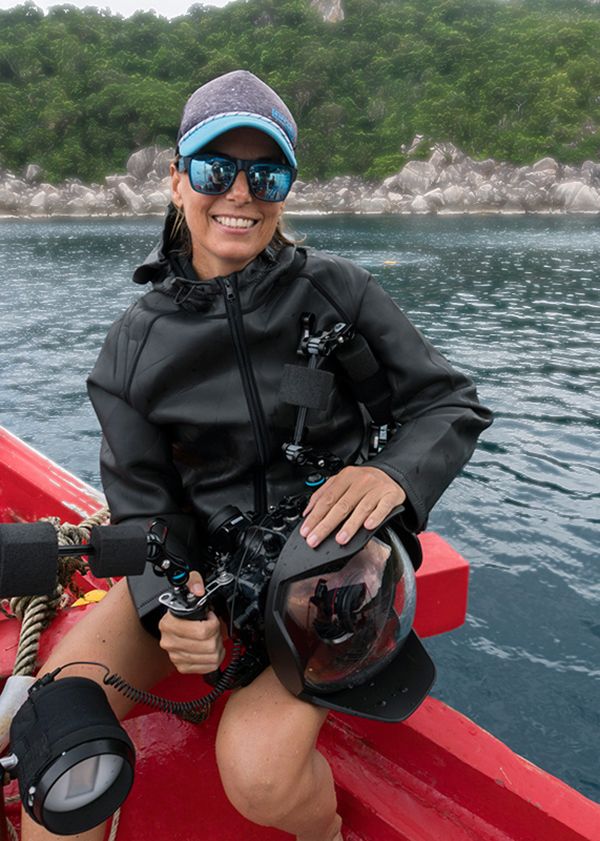 To see more of Elisabeth’s work, make sure to visit her website, www.oceansbelow.net. You can also check out her features on diving the Sea of Cortez and Socorro and photographing tiger sharks in the Bahamas, as well as her handy tips and advice on underwater video composition. Elisabeth’s stills portfolio has been featured in a Photographer of the Week article.

Salome Massonnet wrote:
I love those pictures
You must be logged in to comment.
Support Our Sponsors
Advertise With Us
Newsletter
Travel with us