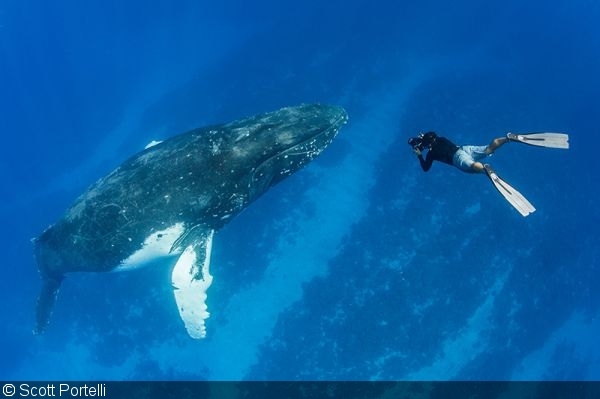 Videographer of the Week Dan Norwood filming whales in Tonga

Underwater photographers who’ve attained a certain level of quality in their imagery are fortunate to have immediate avenues for putting their work to good use—online platforms like DPG, print magazines, stock libraries, and more. But if your medium is moving pictures, you aren’t quite so lucky. You’ll have to work a bit harder to find ways to get your films “out there”—and perhaps even give you a return on your considerable investment in time and equipment.

Anyone who’s met our Videographer of the Month Daniel Norwood will have a good idea how he’s achieved it: Dan isn’t just a talented underwater photographer with years of publishing experience; he’s also got the gift of the gab—a knack for convincing people that he knows exactly what he’s doing, even if it turns out he’s actually doing a fair amount of learning on the job. Either way, his proven eye for framing many an awesome big animal plus a commitment to his newfound craft of videography have allowed him to land some awesome assignments with some great clients—and he’s managed to pull off some high-quality short films along the way.

We chat to Dan to find out his take on how to make the transition from accomplished still shooter to sought-after videographer.

Daniel’s showreel, a compilation of some of his best clips filmed over the past two years

I have been taking underwater photographs for the last 10 years, but in 2018 I made a conscious decision to try and learn how to shoot underwater movies, too. I realized that watching wildlife encounters on film has a way of triggering memories of special encounters in a way that is just not possible with still images, and so I decided I would try to take fewer pictures and record more video clips instead. It has been a nice change, and one that brings new challenges both underwater and when working on post-processing in the editing suite. I’m still really just beginning to learn how to properly edit and shoot engaging short films and hope that the quality of the final product continues to improve in 2019!

I was incredibly fortunate that my first real video assignment happened to be on a liveaboard in the Galápagos. The variety of marine life on every dive made the transition from stills to film much easier, and it was incredibly exciting to experiment while shooting Mola mola, sea lions and swimming iguanas! My focus on shark tourism has also enabled me to spend a lot of time in the water with different shark species and so encounters with tigers sharks, bull sharks and blue sharks are all much easier to relive now I have video footage to look back on. 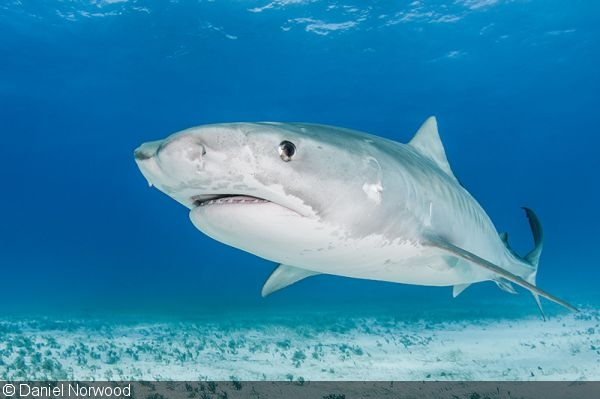 Dan’s favorite species of shark to film and dive with: the tiger

A tough question, with no real answer! The Galápagos immediately springs to mind for the diversity and abundance of marine life that can be encountered there, but anywhere I can shoot big animals is fine by me. I have made some short films focusing on macro subjects in both Indonesia and the Philippines, but if I am honest, it is the wide-angle stuff that really excites me, and what I plan to focus on more in the future. In 2019, I’m really looking forward to documenting the setting up of our shark diving company, Shark Business, in the Caribbean, and going to Socorro for the first time to film friendly mantas, hopefully with some dolphins, whales and sharks thrown in for good measure!

I currently use a Nikon D500 to shoot stills, but changing to shooting video required some new equipment. I learnt the basics using my partner’s compact but very capable Panasonic Lumix GX8, and as I progressed—and quickly realized the value of being able to capture 4K footage at 60fps—eventually upgraded to a Panasonic GH5 in a Nauticam housing. All of my video footage so far has been captured using a basic kit lens in combination with the Nauticam WWL wet wide-angle or CMC macro lenses, and for lighting there really is no other option for me than some compact but powerful Keldan lights.

The best of Palau on board the Palau Siren

Having the opportunity to travel and visit so many amazing destinations around the world is what really makes shooting underwater images and video exciting. I’ve been fortunate to have had so many memorable encounters with marine life in the past that it is hard to pick out any one particular moment, but swimming with sharks and other big animals is what I like to do more than anything else. Highlights that come to mind include cage diving with great whites in Australia, getting up close to tiger sharks for the first time in the Bahamas, shooting endemic marine iguanas in the Galápagos and searching for blue sharks and mobula rays in the Azores. Hopefully, there are more exciting shoots and films to come this year, and beyond!

Many times! This is something that regularly happens to anyone who is trying to capture footage of the natural world. Animals are unpredictable and have a knack for doing interesting things as soon as the film stops rolling. I haven’t missed anything truly epic, like sharks mating or giving birth, but there has definitely been a lot of cool footage that I have been unable to use due to silly technical mistakes on my part or just pure bad luck. I have also had many encounters in the past when shooting stills that I now wish I had filmed instead, but I guess you can’t have it all! Hopefully, I can revisit some of these destinations to shoot video one day. 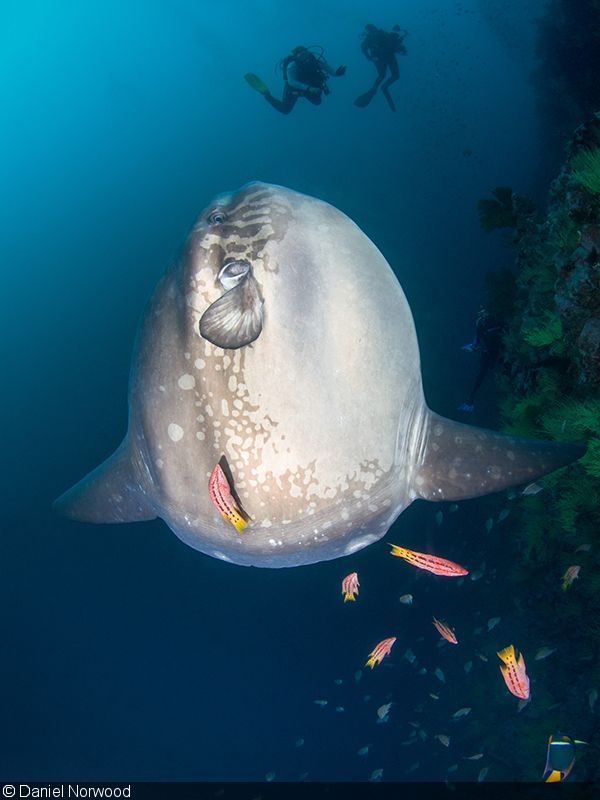 DPG: How do you balance shooting both stills and video?

Balancing the two disciplines can often be a tricky and frustrating process: Sometimes, when shooting stills, something cool will happen that would have been much better on film, and other days when I have my video camera I miss taking still images! One thing I learnt very quickly though is that trying to do both things at the same time does not work, and when I tried to shoot video and stills on an assignment last year I wasn’t happy with any of my results. I now make a plan of what I want to try and capture that day (or trip) and leave the other system at home. I plan to continue focusing on film this year, but will hopefully still find time to take a decent photograph or two.

I would really just like to remind people to not take it all too seriously and to enjoy diving in a safe and responsible way. Getting really good images or video footage takes time, dedication and luck, and cannot just be acquired by buying the latest camera and hoping for the best. Read books by industry experts, learn to dive properly before picking up a camera, and most importantly spend as much time as you can underwater and experiment with whatever equipment you have. Finally, learn how to properly use video editing software if you really want to transform your video clips into a decent film.

Spectacular reefs were the focus of this film in Wakatobi, Indonesia

The search for new encounters and images never ends! There are still many places I would love to visit and I plan to continue to explore for as long as I am able to do so. Video footage of orcas in blue water, tiger sharks feeding on a whale carcass, huge schools of mobula rays, pilot whales and a baitball being attacked by numerous sharks and dolphins are all very high on my wish list! I also want to shoot more topside wildlife and will continue to fly my drone and combine aerial footage with underwater action to make more short films in the future. 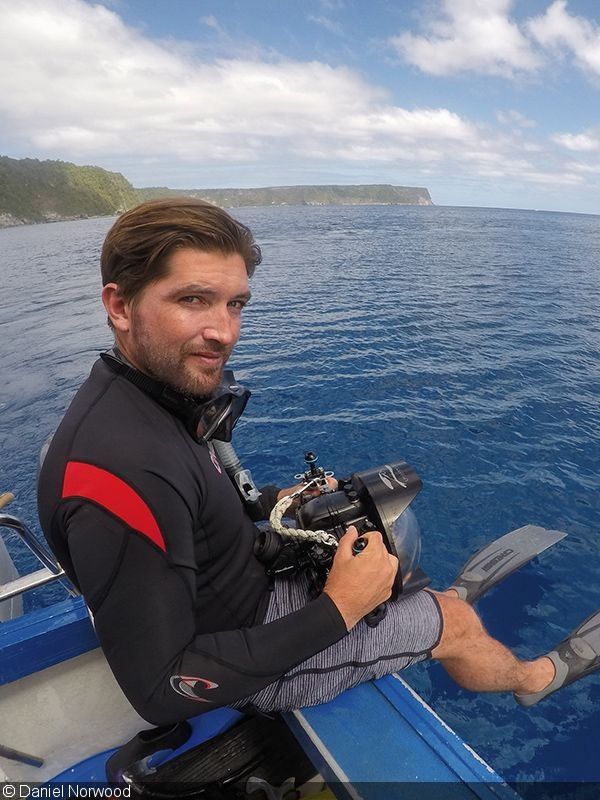 Check out more of Daniel’s work on his website www.danielnorwoodphotography.com, and learn about his forthcoming shark diving operation and its conservation goals at www.sharkbusiness.org. You can also keep up to speed with what Dan’s doing via his Instagram and Facebook pages.

Sarraut Bernard wrote:
Love it
You must be logged in to comment.
Support Our Sponsors
Advertise With Us
Newsletter
Travel with us