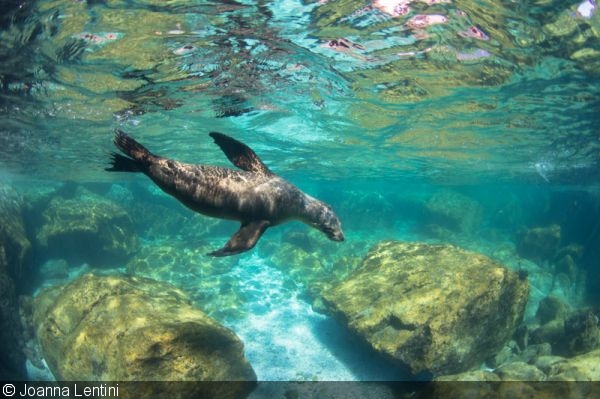 Whether it’s a slight tug on a fin, a gentle nudge on the shoulder, or a torpedo-like flyby, the cheeky sea lions of Los Islotes, Mexico will forever ingrain themselves in the intrepid hearts and minds of visitors. Situated on a rocky outcrop in the Sea of Cortez, this boisterous, resident sea lion colony is frequented year round by snorkelers, freedivers, and scuba divers—and it’s an epic bucket list experience you'll want to repeat again and again.

Meaning "islets” in Spanish, Los Islotes is approximately an hour by boat from the charming seaside town of La Paz. This small group of rugged islands lies just north of Isla Espiritu Santo, on the eastern coast of Baja California Sur. Since 1995, the islands have been considered a marine protected area and are part of the biosphere reserve known as Islands of the Gulf of California Natural Protected Area—a UNESCO site.

The sun-scorched islands, which seem to rise straight out of the sea towards the sky, attract not only sea lions but a great deal of seabirds—as evidenced by the generous amount of guano covering its precipice. This wild vista is bursting with life topside and underwater. It is a rare treat to find such natural beauty and abundant wildlife so close to the hustle and bustle of a city—yet still feel a world away.

The island has three main zones, which researchers have created in order to differentiate between the reproductive and bachelor areas. Zones A and B are the main breeding grounds while a population boom has seen Zone C slowly change from a bachelor pad to more of a breeding ground. As very few adult males live and mate with the females on Los Islotes, young males are exiled across the channel to Isla Espiritu Santo.

Travel to and from Los Islotes is sometimes interrupted by either humpback whales breaching, pods of dolphins on the hunt, or mobula rays launching themselves into the air. And pit stops can be made along the way to witness the hundreds, if not thousands, of frigate birds nesting beside the picturesque San Gabriel Bay. 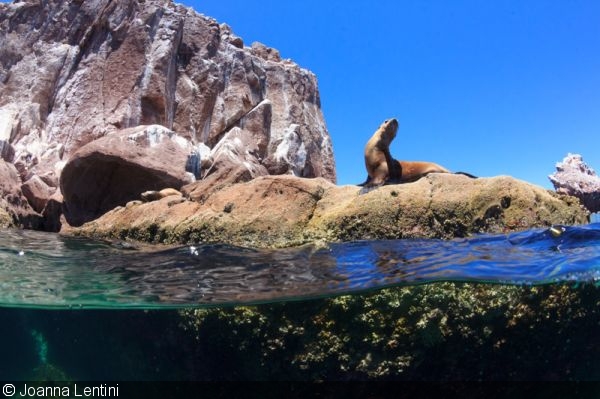 A sea lion pup basks in the midday sun

The inquisitive colony of California sea lions (Zalophus californianus) that call Los Islotes home are in fact the southernmost breeding colony in the Gulf of California, also known as the Sea of Cortez. With very few natural predators, the colony has a robust population of roughly five hundred individuals. They can be spotted basking on rocky ledges in the sun, whizzing through underwater caves and archways, or entertaining visitors with their jovial personalities.

Visitors to Los Islotes are greeted by a daily cacophony of bizarre barks and howls, which are used to summon one another. The amusing sounds are bound to put a smile on visitor’s faces, and from time to time guests feel inspired to take part in the performance. 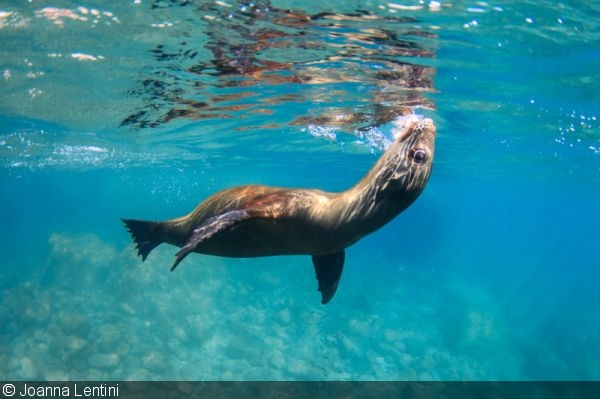 A sea lion pup floats on its back at the surface

Occasionally, there is some confusion between sea lions and seals. Sea lions are easily distinguished from seals by their small ears and pointy noses. However, the sea lion’s ability to maneuver itself on land and scale rocks some homo sapiens may falter at is probably the most impressive distinction between the two. Interestingly, sea lions are far less superior to seals in terms of their freediving capabilities. Seals will dive for up to an hour on a single breath, whereas sea lions max out at about 20 minutes.

While the Sea of Cortez is home to several species of pinnipeds—the northern elephant seal, harbor seal, and Guadalupe fur seal—Los Islotes is only home to one species: the California sea lion. Amazingly, the species can be found from as far north as Vancouver Island in Canada to the Southern Sea of Cortez in Mexico. 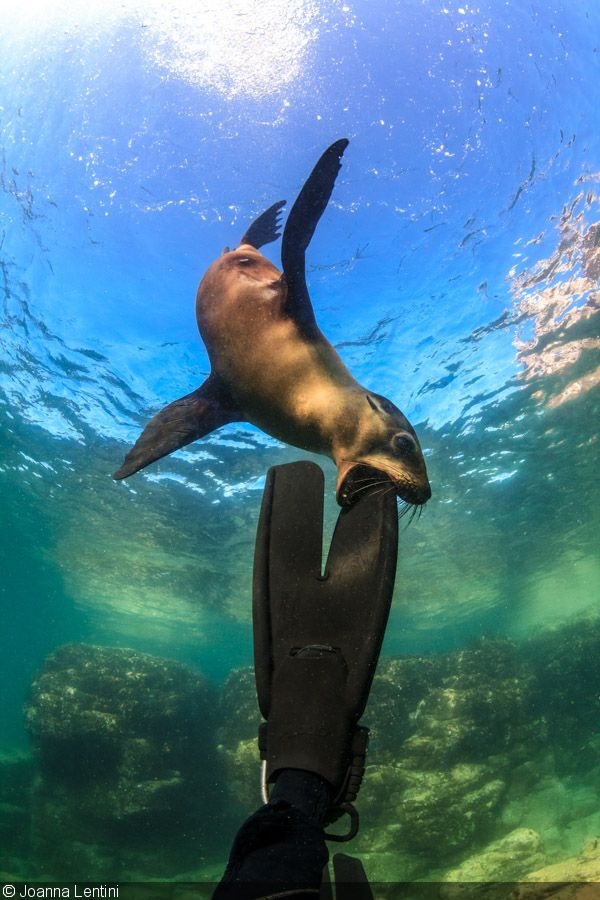 A sea lion pup plays with a diver’s fin

Nothing can quite compare to the sheer joy one will experience through interactions with these aquatic comedians. Large, puppy dog eyes, an insatiable curiosity, and their uninhibited nature immediately enchant visitors. While some encounters may be brief and result in large gulps of seawater from uncontrollable laughter, others may last much longer and require a lasso to bring your buddy back to the boat.

A state of pure bliss will transpire for anyone fortunate enough to have such an intimate encounter with a sea lion. It might start off with a gentle head-butt, followed by some innocent fin nipping, or perhaps a few flybys to check you out—but eventually the games will settle down and turn into something far more intimate.

Your new friend may press his nose against your mask, gaze into your eyes with intrigue, and then nonchalantly rub its body against yours—implying a back scratch is in order. Reaching out, you caress his whiskers and belly. As time seems to stand still, the connection is undeniable—a bond has been forged. Mindful of just how special the moment is, the rest of the world seems to vanish. The camera drops to one side and you cherish each moment that passes, hoping it will never end. 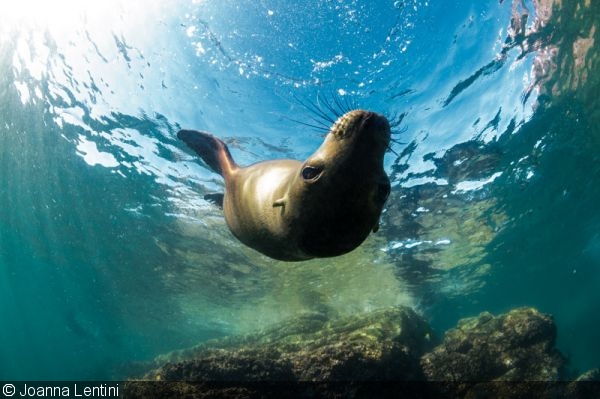 Rather than chasing the animals, it’s best to let them come to you

There are some areas around the island in which you’ll definitely want strobes, such as the archway and cave. Wherever you are on the island, do pay careful attention to strobe placement as there is a lot of potential for backscatter.

Finally, rather than chasing the sea lions it’s best to let them come to you. These curious creatures do not like to be ignored and a little acting can go a long way when trying to get one to approach your camera. The image will be more genuine, in that it will capture the inherent inquisitiveness of these extraordinary creatures. 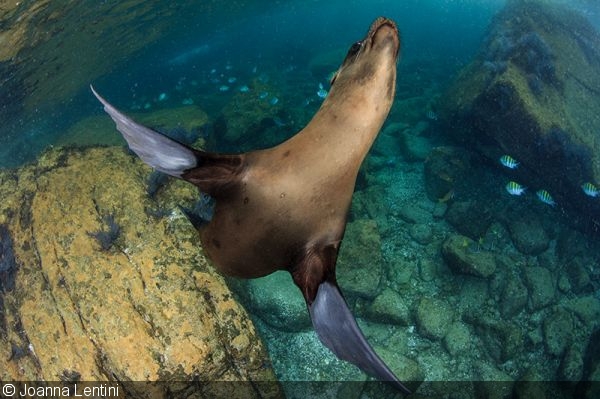 The author would like to thank Cortez Expeditions, Luke Inman and his stunning new book on the sea lions of Los Islotes) for their support.

Oligair Oligair wrote:
Nice!
You must be logged in to comment.
Support Our Sponsors
Advertise With Us
Newsletter
Travel with us