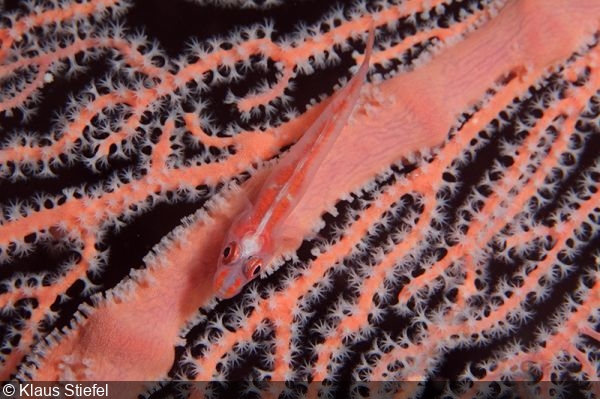 Pleurosicya mossambica, perching on a soft coral, seen at a depth of 150 feet off Malapascua, Cebu, Philippines. Note the fish’s impressive camouflage: Without a macro lens and a strobe, these small fish—less than an inch and a half in length—look like nothing more than dark, fast-moving dots

I admit it: I like gobies. It has certainly gotten me some weird looks at parties when everyone else was discussing basketball or their binge drinking exploits, whereas I was raving about these small marine fishes. Underwater, I have caused my dive buddies some major astonishment when I ignored a thresher shark (what’s so special about that?) swimming along a wall to look for a rare goby in a crevice.

I have been lucky enough to follow my passion for gobies as a scientist during the last several years, researching their biodiversity and escape behaviors. Honestly, part of my fascination with gobies is purely aesthetic. These incredibly beautiful little fishes have some of the gaudiest color patterns on their minute bodies. Depending on the species, you can find an assortment of metallic blue spots, bright orange lines, bars, and stripes. All this makes these fishes superbly flamboyant when seen through the macro lens of an underwater camera. Gobies are worth photographing!

Photographing gobies is like photographing other subjects underwater, but more difficult. Gobies are smaller, harder to find, and more easily spooked than most other marine animals. So, let’s go over some necessary skills and concepts to master to get appealing images of gobies. 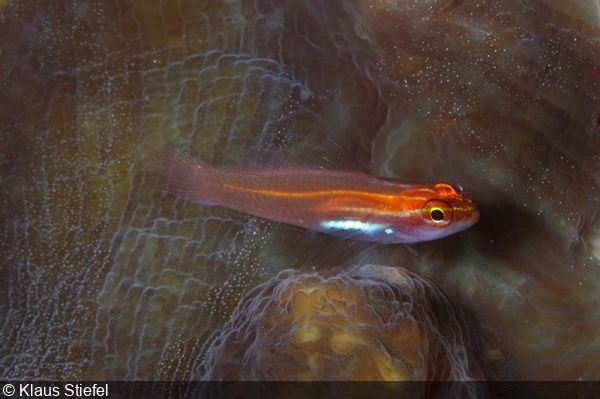 Captured off Malapascua, this species of goby, Eviota pellucida, is rather common and lives on different species of corals, in contrast to many other species which are specialized to live on one invertebrate host

As in so many aspects of diving, buoyancy is key. If you are an experienced underwater photographer, you will likely have mastered this aspect of shooting below the waves. If you are a beginner or an intermediate underwater photographer, take a class with a good instructor who takes his or her time to correct the flaws in your diving technique. Alternatively, practice on your own: How long can you hover just a couple of inches above the sand? Can you swim backwards? Rotate in one spot?

I think of myself as an inverse Michael Phelps: I am great at swimming slowly! A cautionary approach is imperative if you want to get a good shot of a goby. I proceed in steps: I first approach the fish to about three feet away, and then pause to observe its behavior. Did it turn? Is it clenching its fins? Is there any indication that it will flee if I come any closer? Only if I am certain that I am not about to spook the goby do I approach it more closely. I then pause and observe again.

You also want to minimize the disturbance caused by your exhalation. It’s my experience that most marine animals do not flee from the sight of a diver, but rather from the water movement caused by divers and especially from the noise of the exhalation bubbles. If you can afford it and are willing to deal with the extra complications, buy yourself a rebreather. On the few dives I did with a rebreather, I was astonished by how much the behavior of small fishes like gobies changed. They initiated escape behavior much later when I approached them without noisy bubbles coming from my mouth. 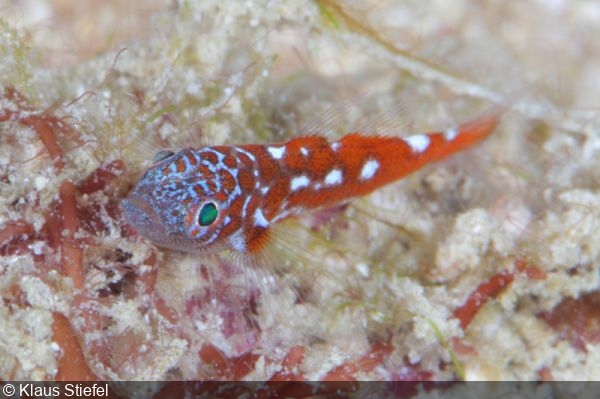 Trimma naudei, photographed off Okinawa in southern Japan. The genus Trimma is very species-rich, and new gobies belonging to the group are still being discovered

If you are diving on conventional open-circuit scuba, I recommend that you control your breathing as much as possible. Exhale slowly and calmly, and possibly exhale through your nose, which will produce smaller and less noisy bubbles exiting through your mask.

With all this cautious behavior, you will still not have any guarantee that the gobies will stay in place. With some species, you will get only one shot—shrimp-associated gobies (see below) will usually escape into their burrow once spooked and not re-emerge for many minutes. Other species of gobies will become accustomed to your presence if you act calmly. Take things one species at a time and learn how to approach each goby by careful observation.

Know Where to Look

With such small fishes, it is imperative to know where to look, especially if you want to find the rarer species. A good local guide works wonders here. An environment-friendly diving reminder is in order here. Frequently, dive guides aim to please their customers by manipulating wildlife so that photographers have better chances at getting a shot of a rare critter. Guides frequently do this without being asked to, out of expectation that the diving guest would value a “money shot” above a respectful encounter with nature. It’s an ugly kind of dynamic which can cost you both style- and karma-points, and I recommend giving a friendly reminder to your guide that, no, you don’t want him to use his poking stick to bend back soft corals or to nudge a goby out of the crevice of a sponge. 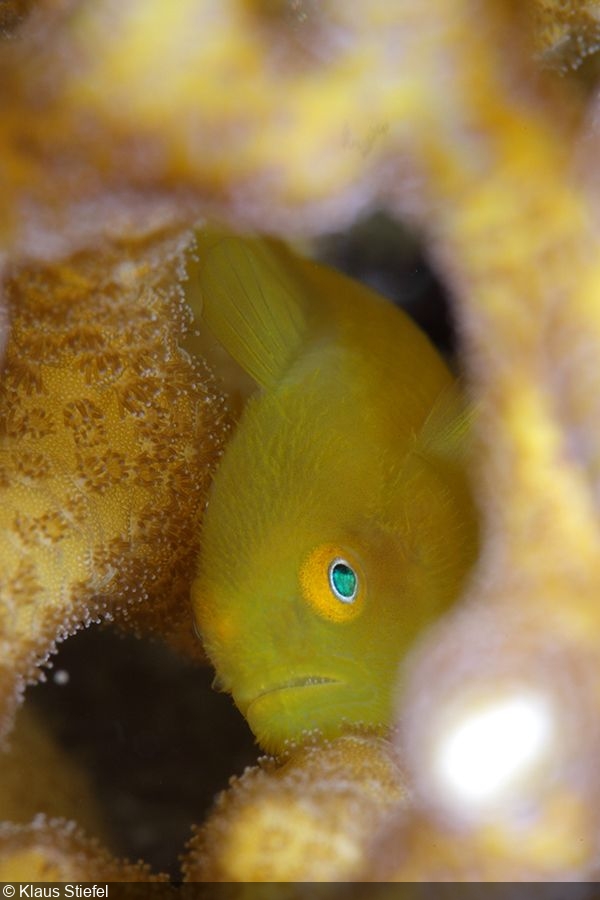 Gobiodon sp., a very secretive fish, is another genus with still-undescribed species. Sometimes these gobies dart so fast between the branches of hard corals that a diver without a lot of patience will completely miss them 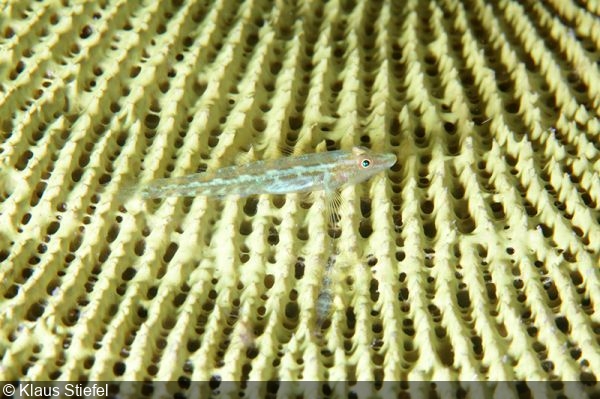 Regardless of whether you dive with a guide or not, it’s worthwhile and rewarding to learn how to spot different species of gobies yourself. One area to look at carefully is the sand, especially the sandy bottom right next to bommies and rocks. Many gobies are epibionts, meaning that they live on other organisms, mostly sponges and corals. The celebrities among these epibionts are the gobies of the genera Gobiodon and Paragobiodon, which are found in-between the branches of hard corals. These species have been shown to feed on coral polyps, making them parasites of their coral homes! They’re keen to hide between the coral branches when sensing any threat from above, so it takes an extra amount of patience to get a good shot of these minute fishes.

Finally, several species of the genus Trimma hover in crevices, sometimes upside-down. They hover in schools, often in mixed species, so it’s worth looking at every individual fish in a crevice if you want to discover rare and unusual species of gobies. 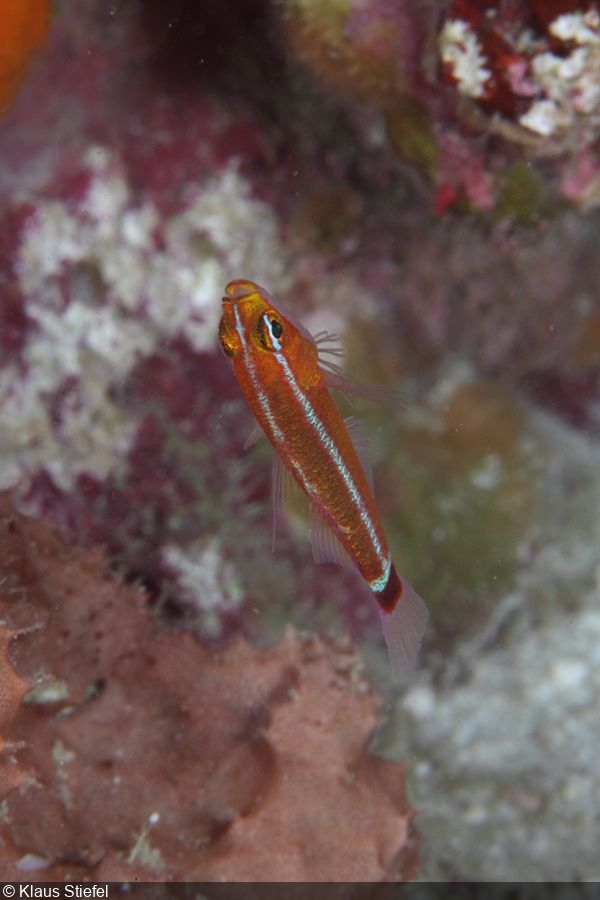 Trimma tevegae, one of the crevice-dwelling gobies that hover upside down, photographed off Malapascua, Philippines. When approached carelessly, they move further and further towards the back of their crevice, making it harder and harder to photograph them

Compose from a Low Angle

Since gobies are usually small and bottom-dwelling, you need to get close to the ground with your camera to avoid the amateurish-looking bird’s-eye view in your goby shots. Needless to say, we have to avoid touching any corals or other sessile marine organisms, but it’s no problem to put your camera in the sand if that helps to get low. Face-on shots of gobies look appealing, as do side shots, or any angle in-between. In many cases, you don’t have the choice and must take the angle which the goby gives you. 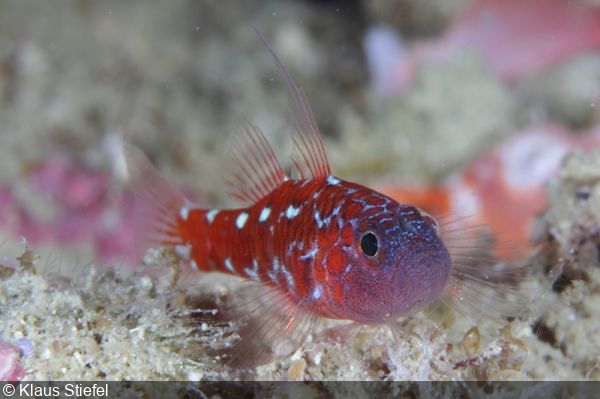 Another shot of Trimma naudei, at a sideward angle, Okinawa, Japan. This goby was no further than six inches from the port of the housing

Fish portraits can look stunning, but in the long run, you want to find some new ways of creating images of gobies. I especially enjoy shooting fish behavior and natural history. When it comes to gobies, the type of behavior I have enjoyed photographing most is the shrimp–goby interaction. More than 100 different species of gobies share a burrow with a shrimp—the shrimp excavates the burrow, and the goby acts as a watchman at its entrance, alerting the shrimp with tactile signals if a predatory fish approaches. This mutually beneficial interaction is called mutualistic symbiosis, and the shrimp–goby couple lined up at the entrance of their burrow makes for interesting shots.

In a few instances, over many, many dives, I have had the good fortune to capture two gobies fighting over a piece of territory. To get shots like this, I can only recommend spending a lot of time underwater and acting as calmly as possible all the time so as not to disturb natural fish behavior like fighting. 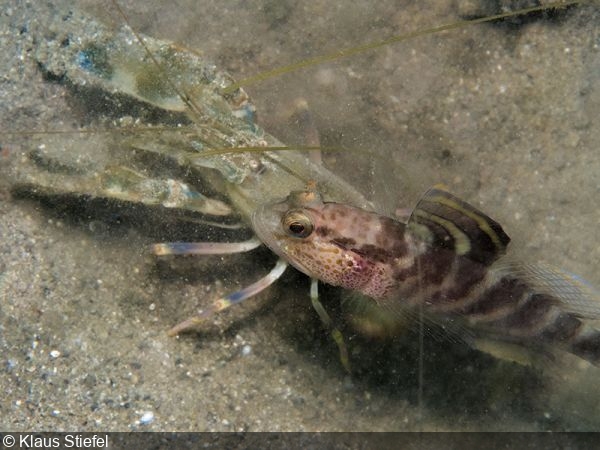 Mahidolia mystacina and the shrimp it shares a burrow with, captured off Bolinao, Pangasinan, Philippines. The shrimp touches the dorsal fin of the goby to sense any tactile signals by the fish indicating an approaching threat. This is a female fish, with a rounded dorsal fin. It’s relatively rare to be able to distinguish the sexes in gobies 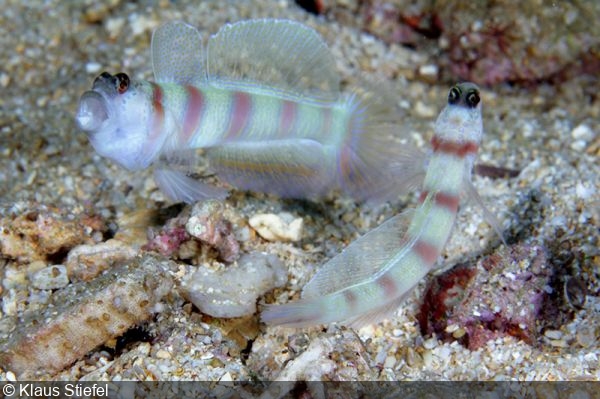 Two angry Amblyeleotris steinitzi fighting over the rights to a small piece of sand, Okinawa, Japan. It took a lot of good luck and fast reflexes to get this image

Natural history more commonly observed is a goby infested with parasites, which are typically huge in relation to the goby’s body size—as if a human carried a volleyball-sized tick on his back. Many of these parasites are crustaceans, but the evolution towards a parasitic lifestyle has radically transformed their bodies, and they look like bizarre antenna-like contraptions fused to the fish. Shots of parasites on gobies can look intriguing and document a fascinating aspect of marine biology.

To find these parasites, take your time, and carefully scan the body of each fish you shoot. Do this both underwater and once back on land when post-processing your images. On several occasions, I only discovered a parasite on a goby when looking at my images on a computer screen after the dive. For some reason, whip coral gobies (Bryaninops yongei) seem to be heavily parasite-infested. It’s possible that being exposed to a steady current of water flowing around the whip coral increases the rate of parasite larvae encountering a goby host. 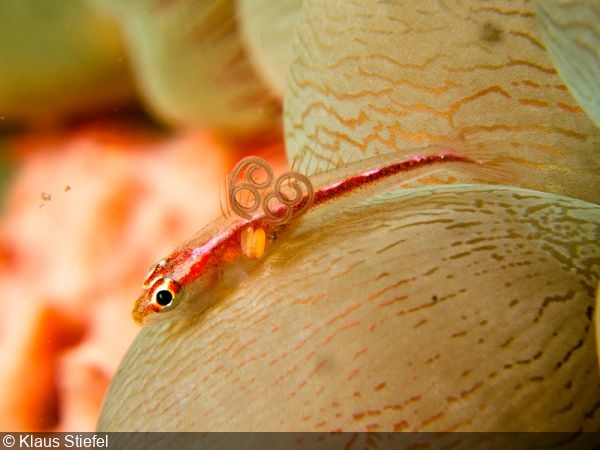 Pleurosicya micheli, perching on a bubble coral with a massive parasite on its back, likely Siphonostomatoida sp., a type of copepod crustacean. Such parasites can be a huge drain for small gobies. This rather unpleasant situation (for the goby) was photographed off Dauin, Negros Island, Philippines

Gobies aren’t the easiest photo subjects: They are tough to spot, hide in hard-to-reach places, and will challenge your camera’s autofocusing capabilities. But these skittish little fishes are also very photogenic, and putting in the time to capture them well will help improve your diving skills and macro shooting technique.

About the Author: Dr. Klaus M. Stiefel is a zoologist, underwater photographer, scuba instructor, and popular science writer based in the Philippines. Klaus’ latest popular science book (in German) explains the neurobiology of extreme brain states such as inert gas narcosis. Check out Klaus’ website, www.pacificklaus.com, to stay up to date with news of a his new book coming in 2020!

Sandy Rosieres wrote:
This is beautiful
You must be logged in to comment.
Support Our Sponsors
Advertise With Us
Newsletter
Travel with us