SeaLife has created a niche as a company that offers easy to use, affordable underwater photography and video equipment. They’ve recently extended their lineup of Sea Dragon lighting to give you more versatility, whether you’re using a SeaLife camera or another brand of compact or DSLR. The three new lights are the Sea Dragon Mini 650, a 650-lumen handheld dive light; the Sea Dragon 2100 Dual Beam, a versatile two-in-one light switchable between a 2,100-lumen flood beam and an 800-lumen spot beam; and the Sea Dragon 2500, a 2,500-lumen flat-panel LED light. Each is designed for a different purpose, but all of them place the same emphasis on ease of use without sacrificing performance.

With all three lights available to test, I had the unique opportunity to do a detailed side-by-side comparison to see how the lights could best be used to capture different subjects. My testing ground was perfect for the purpose: Indonesia’s muck dive capital of Lembeh. All three lights were tested with both the SeaLife Micro HD+ permanently sealed underwater camera, and a Canon EOS 7D Mark II in a (modified) Subal CD7 housing, and I shot still images as well as video footage. 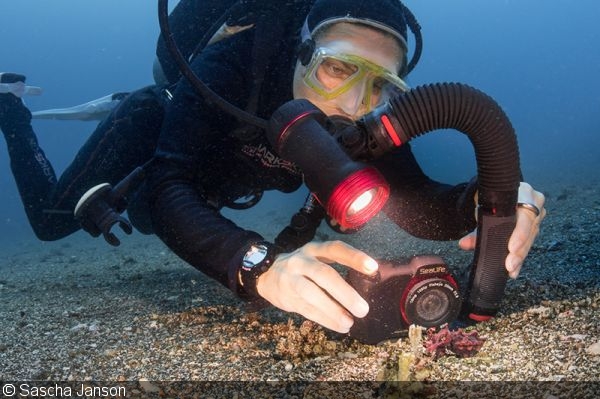 The Sea Dragon 2500 features SeaLife’s Flex-Connect, a remarkably simple and intuitive system that allows you to attach and remove grips, arms and trays with a single click. I really liked the Flex-Connect system, for its one-click simplicity, especially for a quick switch when I needed to move the light from the Micro HD+ to a DSLR.

The wide beam angle and powerful 2,500-lumen output of the Sea Dragon 2500 produces an even light throughout the frame when shooting up to a few feet from your subject, so the viewer does not notice the ambient light in the image. The working distance of the light depends on dive depth (diving deeper or going on night dives actually makes lights perform better because you’re competing less with the sunlight in these cases), but generally speaking an ideal distance is around one to two feet.

With its 2,500-lumen output, I was concerned that the high power may produce hotspots, or a spotlight effect, in the image. However, even when photographing larger critters, the 120-degree beam produced a pleasingly even lighting throughout the frame. Additionally, the Sea Dragon 2500 features new flat-panel COB LED technology and a color-rendering index (CRI) of 90. The CRI measures how well an artificial light source mimics natural light, which in turn makes the lighting in an image seem more realistic. At a CRI of 90, the SD 2500 has extremely high color accuracy, which I noticed when capturing footage of Lembeh’s vibrant critters. 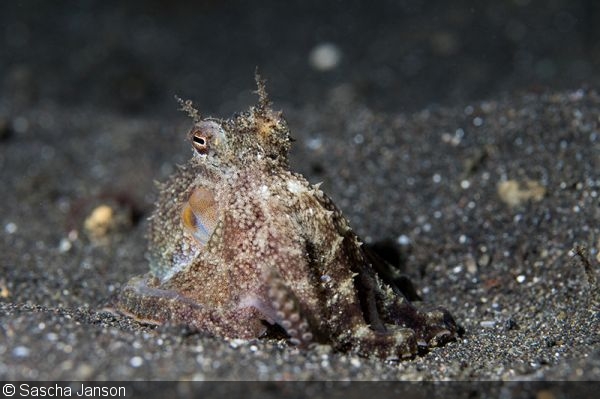 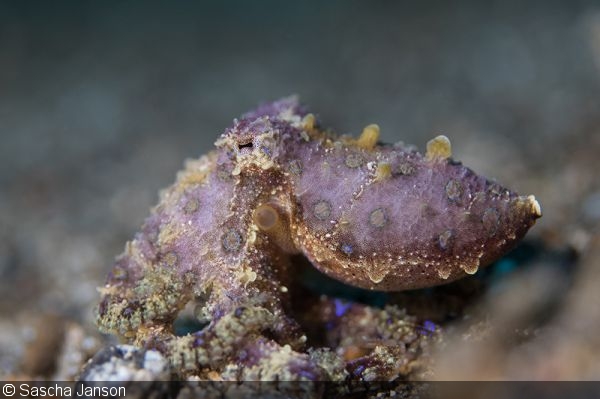 For example, in the shot of the blue-ringed octopus above, the lighting is even throughout most of the frame, with a gradual falloff in the background. The colors look natural, and the result is that the artificial light “disappears” from the image. This is particularly important for shy subjects that require extra working distance between your camera and subject.

This natural lighting makes the Sea Dragon 2500 a versatile light, performing equally well on DSLRs and compact cameras with a wide field of view like SeaLife’s Micro HD. In addition, action cameras like the GoPro will also benefit from the strong, wide beam of the Sea Dragon 2500, as they have fixed lenses with wide angle of view and don’t focus particularly closely. 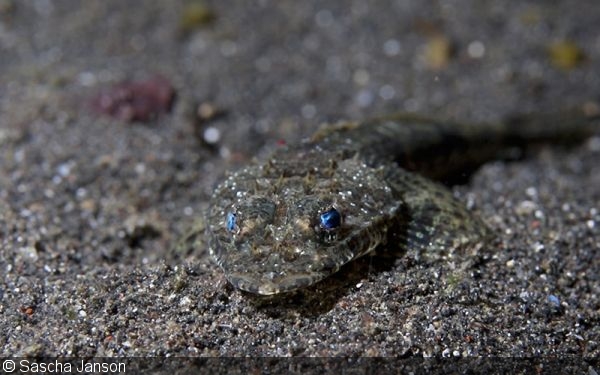 The Sea Dragon 2500 has three power options—25%, 50% and full power—which you cycle through with a press of the main button. If you switch off at a particular power setting, the light will switch on again at the same setting. This is useful as one can “preset” the light at the softest setting, for example, to avoid scaring away a shy critter when you switch on.

The battery lasts for 60 minutes at the highest power setting and can be replaced with a spare in between dives, rather than having to wait for an internal battery to charge on its own. If you plan to do multiple dives with short surface intervals, the ability to swap batteries is welcome. It takes nearly three hours to fully charge an empty battery, so having a fully charged extra battery is recommended. This is especially important in Lembeh, where dives last for at least an hour, and we like to hop back in the water right away when we find a rare nudibranch. I was happy to see that the battery compartment is sealed with two O-rings and separated from the actual light compartment, so even if the battery compartment floods, the light will most likely still be fine. 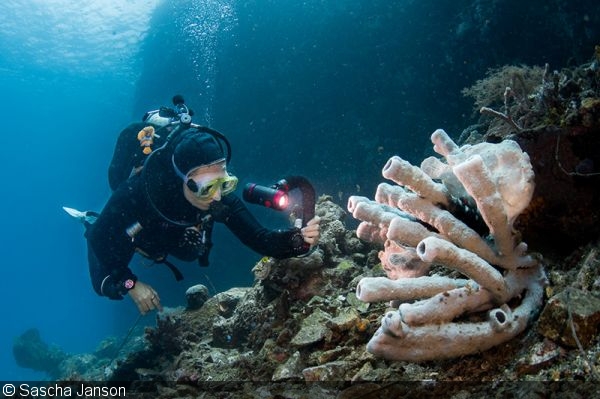 The Sea Dragon 2100 is mounted via the Flex-Connect system—the same, simple one-click mechanism used by its sibling. This means you can easily switch between lights should a particular situation call for a specific light.

The Sea Dragon 2100 has a less-intense light than the 2,500-lumen Sea Dragon 2500, but actually appears brighter because it’s focused into a narrower 100-degree beam, rather than the latter’s 120-degree beam. As the Sea Dragon 2100 doesn’t give you quite as much coverage, it is ideal for situations when the subject is far more important to the image than its environment, and even lighting throughout the frame isn’t as important.

Like its sibling, the Sea Dragon 2100 was best positioned just a little off axis of the camera, about 45 degrees from the top and from the side, to create an attractive shadow (when using one light only). Again, the best working distance of the Sea Dragon 2100 (in Flood mode)—much like the Sea Dragon 2500—was no more than about two feet. Beyond this, colors started losing their vibrancy. 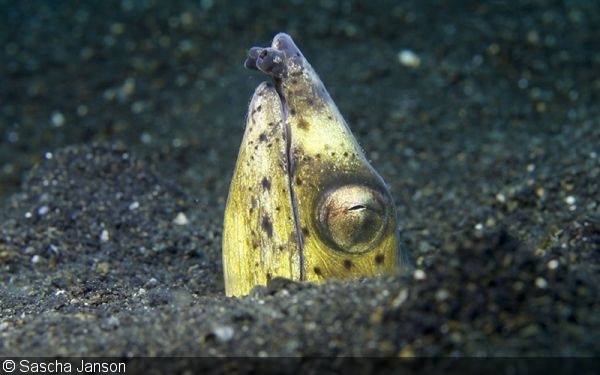 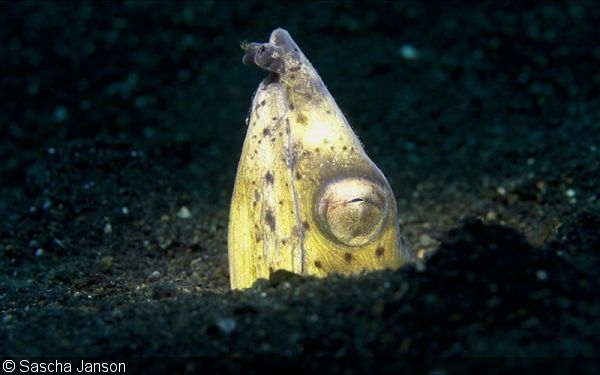 For a subject like this highfin snake eel, it’s not necessary to fully illuminate the surroundings, since it mostly lives near black sand, an uninteresting compositional element. The Sea Dragon 2100’s bright beam is ideal here, providing excellent illumination of the eel, and the wider beam angle is not missed on the sandy areas. There are situations, however, when the environment is actually a distracting element in the frame, and not lighting it up at all it is beneficial. This is where the Sea Dragon 2100’s spot mode comes in handy.

One of the most important elements in underwater imaging is the negative space that surrounds the subject. Critters such as those in Lembeh are often situated next to or in front of unsightly objects that detract from the subject. In such cases, we only want to light the subject, and therefore, want a narrow beam angle. 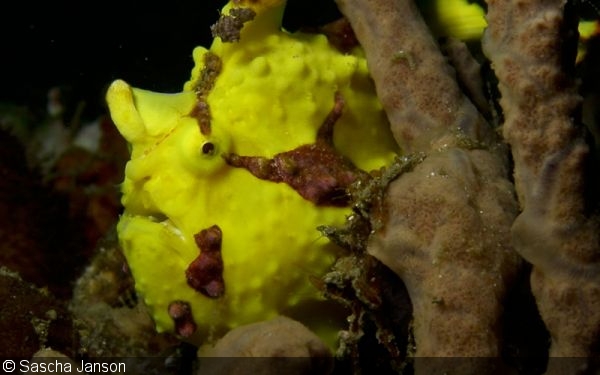 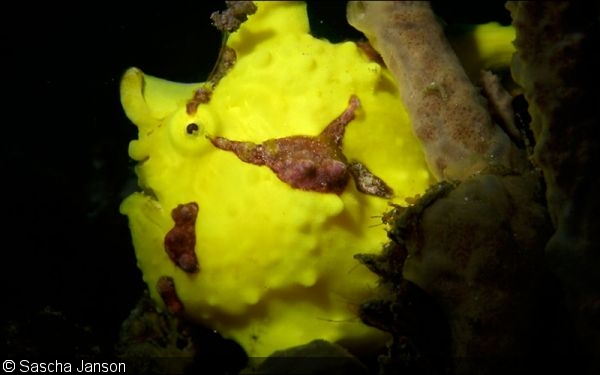 The warty frogfish above, for example, was posing next to some distracting coral, which was illuminated when using the Sea Dragon 2500 or the Sea Dragon 2100 in flood mode. However, switching to the Sea Dragon 2100’s spot mode, I was able to only light the fish, isolating the subject and allowing the amazing colors and details of the subject truly stand out. I found that the spot mode was a great creative tool, as it allowed me to selectively illuminate exciting subjects, while surrounding it with dark, non-distracting negative space.

SeaLife have made using the Sea Dragon 2100 incredibly easy, with a single button doing all the work. A short press cycles through the four operating modes—100% Flood, 50% Flood, 25% Flood and 100% Spot—while a long press switches the light on and off. 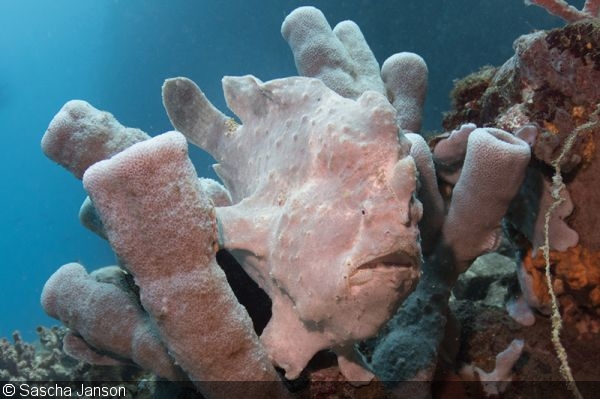 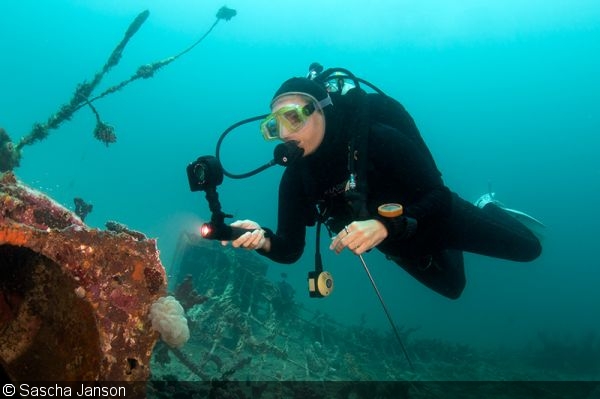 The Sea Dragon Mini 650 comes with a YS-mount to connect the light to your camera or a handle. It also comes with mounts for SeaLife’s AquaPod, your housing’s cold shoe, and the GoPro. This versatility meant I could easily interchange and pair it with different compact systems. SeaLife’s Micro HD doesn’t have a cold shoe, so you can’t connect the Mini 650 directly out of the box; I used a Light & Motion 3/4-inch Locline Flex Arm Base with a Backscatter YS adapter for 3/4-inch flex arm. Of course, the Mini 650 can also simply be used handheld as a dive light to search for critters hiding in crevices.

As a sole light source, the Mini 650 Flood shines as an accomplice to an action camera or compact such as the SeaLife Micro HD. The 650-lumen output is best matched with these cameras when the subject is very close to make the most out of the modest output. Don’t expect to light up entire reefs with the 120-degree beam from this light, but it is capable of adding a kiss of color and contrast when it’s close enough to the subject. I found the Flood version of the Mini 650 to be usable up to around a foot away.

The Spot model of the Sea Dragon Mini 650 has a beam angle of 15 degrees, so it provides a bright, narrow beam that’s perfect for pointing out possible subjects.

The idea behind the Sea Dragon Mini 650 Flood is being lean and mean, so it’s not intended to be used with a big DSLR as a main light source. That said, I found the Mini 650 to be a great choice for a focus light in dim conditions, when my DSLR would otherwise not be able to find perfect focus on super-macro subjects.

Despite what we might wish for as underwater photographers, there’s not one perfect photo/video light that works in every situation. Rather, we must select a light based on the conditions, the subjects, and what we hope to accomplish. This is perfectly proved with the variety offered by the Sea Dragon line. The high color rendering index and lumen output of the Sea Dragon 2500 makes it a contender for my go-to wide-angle light source. The ability to switch between spot and flood on the Sea Dragon 2100 Dual Beam proves beneficial for experimenting with dramatic lighting techniques. And for ultra-compact systems, the Sea Dragon Mini 650 is a great choice for adding just a touch of light or as a focusing tool.

And while all of the lights in the series have situations in which they work best, I was pleased to find certain characteristics pervading throughout each—most notably the intuitive and easy-to-use controls and compact form. 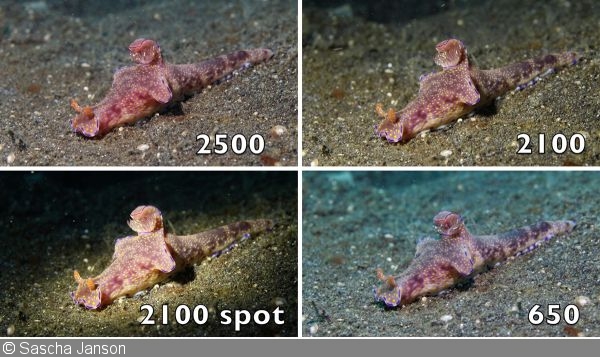 A T-bar nudibranch (Ceratosoma tenue) lit with the various lights 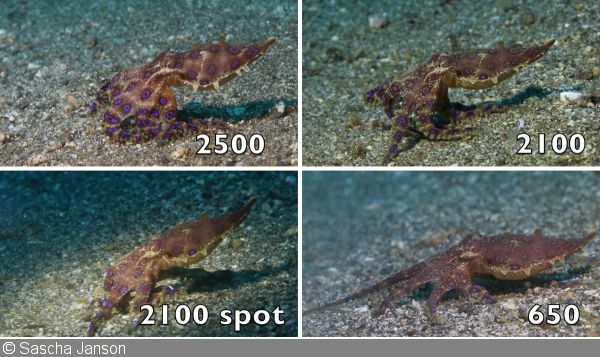 A blue-ringed octopus (Hapalochlaena sp.) lit with the various lights 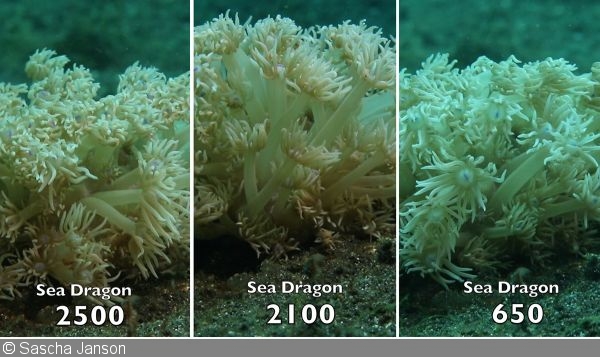 This review was undertaken in the Lembeh Strait, Indonesia, staying at Lembeh Resort and diving with Critters@Lembeh Resort.