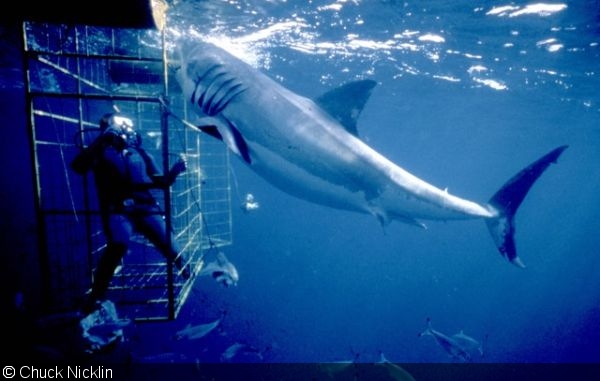 Any self-respecting underwater image-maker who’s taken the trouble to do their homework on the masters will know the work of Flip Nicklin. His breathtaking images of whales as a photographer for National Geographic have made the Nicklin name one of the most recognizable among underwater shooters.

Yet that career of capturing cetaceans would never have been realized without the experiences Flip had as a young man, growing up with his famous father, Chuck, one of the trailblazing generation of underwater photographers and cinematographers that includes Jacques Cousteau, Bates Littlehales, Al Giddings, and Stan Waterman. 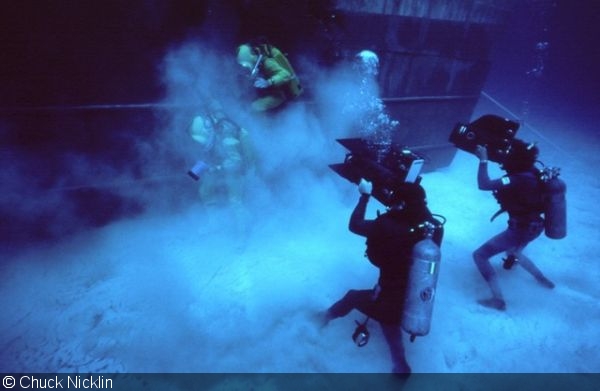 Shooting the James Bond film, For Your Eyes Only

Indeed, the elder Nicklin had already become the original “whale guy” back in 1963. Freediving off of San Diego, Chuck had come across a Bryde’s whale entangled in a gill net, and after releasing the animal, was photographed riding the whale by a friend.

The image, which was picked up by various national magazines, quickly grabbed the attention of pioneering underwater shooter and National Geographic staff photographer Bates Littlehales, who had an assignment to film gray whales in California’s waters, and Nicklin and Littlehales soon started working together, becoming good friends. 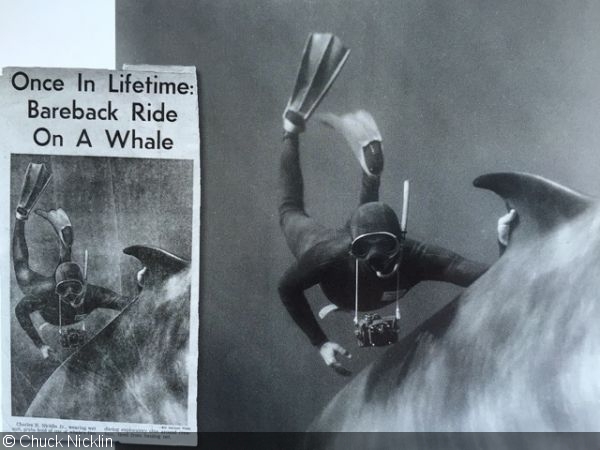 Chuck had begun freediving long before, around 1949, and when he got to know Littlehales, he was running a successful retail dive business in San Diego, the Diving Locker, one of the first dive shops on the west coast. Photographer Ron Church had been brought in to set up a photographic section at the store, and Ron and Chuck would head out with a Rolleiflex camera in Rolleimarin housing and take it in turns to shoot the local underwater flora and fauna—in those days, just six frames each at a time, with a roll of film holding a mere 12 exposures.

“We used all kinds of homemade housings,” recalls Chuck, “but my break came when my dear friend Connie Limbaugh was lost when cave diving in France. They recovered his Rolleimarin still camera and [Kodak] K-100 16mm movie camera. His wife Nan asked if I would like to use it and all of a sudden I had the state of the art.” 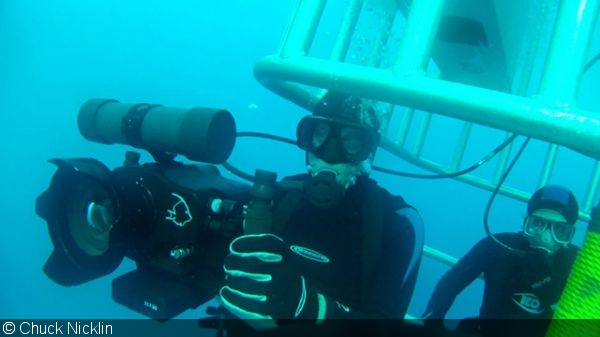 Mentor to the Masters

It wasn’t long before Church and Nicklin set up the San Diego Underwater Photographic Society—with meetings taking place in the back room of the Diving Locker. Established in 1961, and still active today, it is one of the earliest organizations dedicated to the advancement of the art of underwater photography and videography. Many of today’s veteran underwater shooters and filmmakers—including Marty Snyderman and Howard Hall—were mentored by Chuck, who didn’t just have a knack for business but was always ready to share knowledge and offer encouragement.

It was the friendship with Bates Littlehales that would lead to Chuck’s first big creative opportunity. In 1965, the National Geographic photographer had a shoot in Turkey and asked Chuck to come along as his assistant, but when Bates ruptured an eardrum on a previous assignment and had to pull out, Chuck was sent instead. It was his first story for the National Geographic Society. 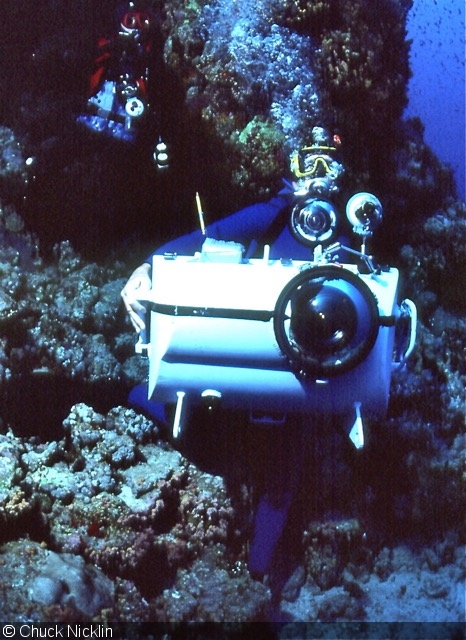 Another fortuitous meeting shortly afterwards would ultimately shape Chuck’s career path. It was at a spearfishing championship that Nicklin met the legendary filmmaker Al Giddings, who told him that he was going to Cozumel to shoot a film and that Chuck should come along.

Despite his keenness to go, Chuck declined, citing his commitments at the Diving Locker. A short time after, Giddings took to the stage at a film festival—with everyone who mattered present—declaring, “You all know Chuck Nicklin, who owns the Diving Locker. He’s going to shoot with me in Cozumel.” Giddings, it seemed, wasn’t going to take no for an answer.

“Al is a very hard-working, take-charge kind of guy,” Nicklin says today of his close friend. So the younger Chuck finally decided he would join Giddings in Mexico. 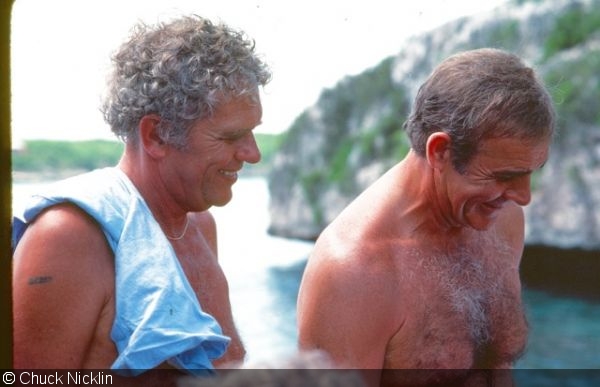 Chuck’s first collaboration with Giddings was the start of a long association, which began with shooting commericals and promotional clips, and eventually led to working in Hollywood. His first big movie as cameraman was 1977’s The Deep, based on a novel by Jaws writer Peter Benchley, and Stan Waterman joined Giddings as directors of the film’s multiple underwater scenes.

“Stan had a lot of projects going on, and after the most important shoots, Al and I finished the film in Bermuda,” remembers Chuck. “There are a lot of fun times working on a film for months, but there are many long, wet hours also!”

Perhaps unsurprisingly, despite turning 90 next year, Chuck remains active, traveling the world and still shooting. (“I have pretty much been able to keep up with equipment advances, from 70mm Panavision to GoPro,” he says.) But it’s only last year that he finally put his fascinating experiences into words with the publication of his book, Camera Man: Stories of My Life and Adventures as an Underwater Filmmaker, a rollicking account of his exploits that’s essential reading for underwater photographers and videographers alike.

Asked what sort of wisdom he hopes young filmmakers will take away from reading the book, Chuck distills down his experience beautifully: “Young and old should hold the camera still. On a job, sleep when you can, so you are ready to go when they say, ‘Let’s roll ‘em!’ Most of all, be positive or just keep quiet.” 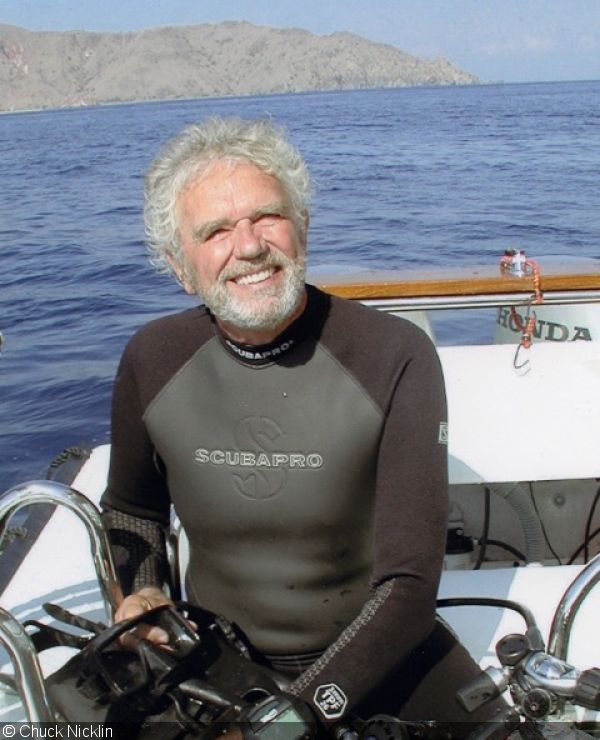 Read about the amazing life of Chuck Nicklin in Camera Man: Stories of My Life and Adventures as an Underwater Filmmaker. To purchase a signed copy, visit www.chucknicklin.com.