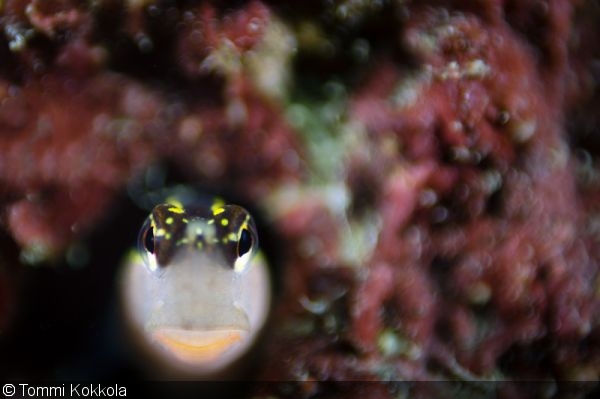 Late in 2014, I heard pro shooter Imran Ahmad talk about reverse ring macro (RRM) at the Diving Resort Travel Expo in Hong Kong. Before that, I’d never heard of RRM. Many of his images were very unique—like nothing I’d ever seen before. Naturally, I felt the need to try it out. More than a year and several dive trips later, I feel I’ve only scratched the surface.

During this time, I’ve had the opportunity to experiment with many lens combinations on a Canon full-frame camera. As such, I’ve been able to put together a comprehensive case study of the results with these combinations to help Canon shooters make the best decisions when trying out RRM. I performed this study with Canon’s EOS 5D Mark III, and thereful the results are applicaple to other Canon full frame cameras only.

Reverse ring macro is famously called “poor man’s macro.” The idea is to use almost any lens with a cheap adapter that allows you to mount the lens backwards on your camera to achieve macro results—rather than purchasing an expensive, dedicated macro lens. For an in-depth explanation of the technique, make sure to read Imran Ahmad’s guide to RRM.

I would not recommend anyone starting to take underwater macro photographs with the “cheap” option by reversing a lens, as it is extremely challenging. Yes, reversing a 50mm would allow similar magnification to a Canon 100mm EF Macro f/2.8. However, the issue is that by reversing the lens, you lose control of autofocus, aperture and a significant amount of depth of field.

Another major challenge with RRM is that the working distance is very short—just centimeters, compared to several inches with a traditional macro lens. Do remember that trying RRM is not a reason to damage nature underwater and you risk harming the environment in your attempts to get close enough to your subject. Please exercise extreme care. 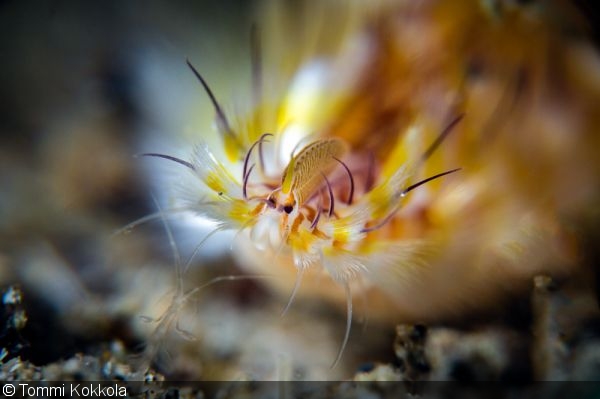 I borrowed a Nauticam Super Macro Converted (SMC) plus multiplier and I was able to get results like this much more simply than with a reversed lens. (Canon 100mm EF Macro f/2.8 IS, Nauticam SMC, Nauticam Multiplier, f/25, 1/200s, ISO 250)

As such, super macro wet diopters are likely to provide results easier than RRM. Wet diopters are also more flexible, as you can remove them or stack them during your dive.

But if you are bored with normal macro photos and you have the opportunity to play, it’s time to make things interesting—and a lot trickier! My favorite reason to use RRM is not for the magnification, but for the creative blur produced, also called bokeh. Let’s get things started with reversing a single lens.

Because there’s no electronic connection between camera and lens with RRM, almost any lens can be reversed—even a vintage or non-Canon lens. The lens only needs to have a filter thread to which you can connect an adapter. Also a “Macro Reverse Ring Camera Mount Adapter for Canon” is needed. It is basically a metal ring that has the Canon lens mount on one side and a male filter thread on the other. You need to choose correctly to be able to fit it to your lens filter size.

Because of the very short working distance, it is important to have a port where the distance between the lens and the port glass is as short as possible, otherwise you might have the focus point inside the port. So having a fairly short port and many different extensions is vital. 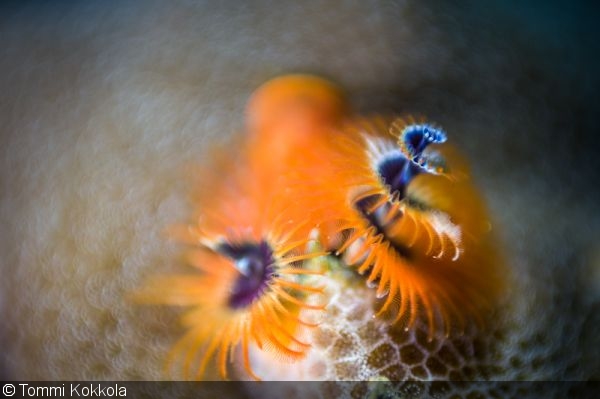 When shooting RRM, the only way to focus is to move the camera in and out of the focus plane while looking through the viewfinder and firing rapidly, otherwise known as called “focus bracketing.” The manual focus settings on the lens makes little difference; with a single lens, the maximum focus distance seems to give the best results.

All newer lenses have the aperture at the maximum diameter when not connected to the camera. This is usually fine and gives plenty of light and allows you to shoot with low ISO values. However, with an f/1.2 or f/1.8 lens, the depth of field is too narrow and I wanted to stop down the aperture for more depth of field and less ambient light. The trick is to mount the lens on the camera in a normal way, set the desired aperture, press and hold the depth of field (DOF) preview button, and simultaneously remove the lens from the camera. 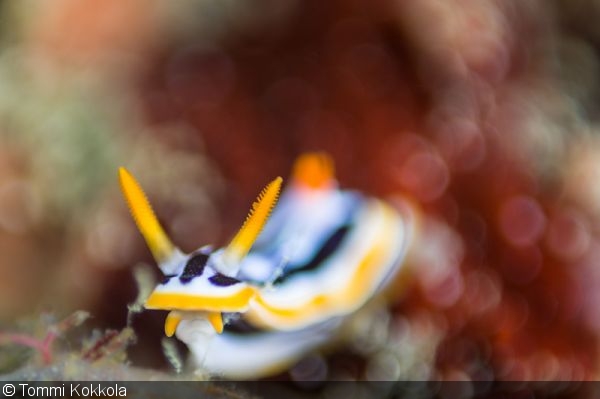 I have been looking for a way to use RRM with bigger subjects but so far with no success. I tried a few 85mm lenses but they just won’t focus at all. So far I’ve only tried 50mm lenses in the water, mainly due to port configuration constraints.

Adding an extension ring or two seems to increase the magnification, and it only gives a little less working distance and no vignette. This is something I need to try underwater. It may be a better alternative for more magnification than using two lenses as described next.

Some main properties of some Canon EF lenses when reversed

Note: The figures given in the above and subsequent tables are measured by hand without housing on land. Underwater testing would give very different results. Also, the RRM adapter configuration (i.e., thickness) surely impacted the results as well. Thus, consider the results just indicative. The working distance plus the lens length compared to your port length gives you an idea of the real working distance underwater. 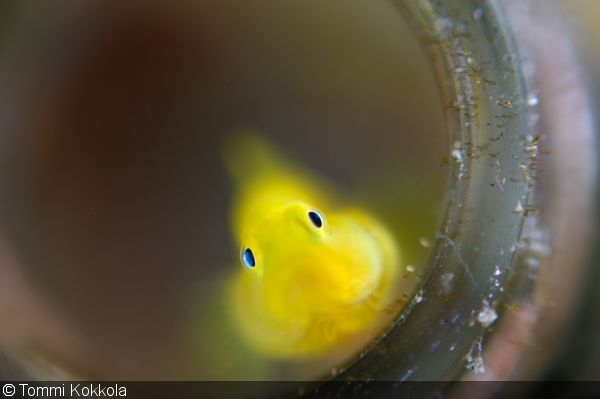 The Verdict: I achieved my best results with the Canon 50mm compact macro f/2.5. So far, this lens has been easiest to get interesting results. The bokeh produced often has nice “donuts” or “circles” depending on the texture. This lens also has a working distance of around three inches, which provides enough space to get even lighting from a strobe or continuous light.

Another way to set up RRM is to use one lens as a “base lens” plus another lens reversed. A “Male-Male Macro Reverse Ring” and often a “Filter Stepping Ring” are needed to connect two lenses via their filter thread.

A benefit with this setup is being able to set the aperture on the base lens. However, all combinations I tried cause heavy vignetting and smaller apertures only increase the effect—to the point where it looks like you’re shooting through a pinhole. This can be a desired look for some—akin to snooting—but was too severe for my liking. 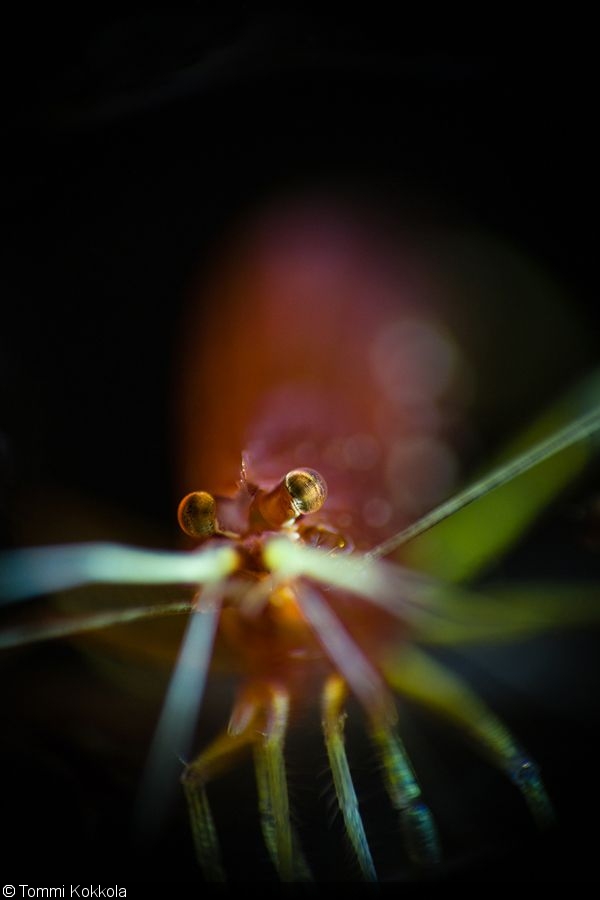 Canon 85mm as Base Lens

Using a Canon 85mm f/1.8 produces strong vignetting when focused at a maximum distance. I recommend focusing to a minimum distance, which gives a working distance of around 3–3.5cm. Combining this with the reversed Canon 28mm results in the highest magnification I tried. However, it wasn’t really workable and just too difficult to get the subject in sharp focus.

Using the reversed Canon 40mm f/2.8 and 50mm f/2.5 lens results in very circular images in most cases, also with very short working distances. I haven’t tried the 50mm f/1.2 underwater. Using a base lens wider than an 85mm focal length was far from practical due to the extreme vignette produced; even a Canon 50mm f/1.2 was not really usable. 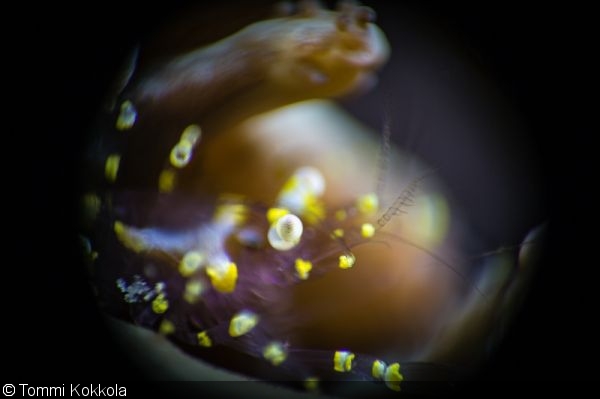 I also found that in many cases you have less unique bokeh effects than with a single reversed lens. This setup usually results in extreme magnification, at the cost of heavy vignetting.

The Verdict: Of the above combinations, I recommend a 100mm base lens combined with a reversed 50mm compact macro f/2.5 lens. However, none of the combinations I tried is really recommendable. I’ve not been overly impressed with any combination so far. The main issues are heavy vignetting and also a very short working distance.

Reverse ring macro is certainly not a technique for beginners. It takes a lot of experimentation with lens configurations to figure out what works with your skill set and artistic vistion. Hopefully, this series of experiments gives a better notion of what might work best for you. 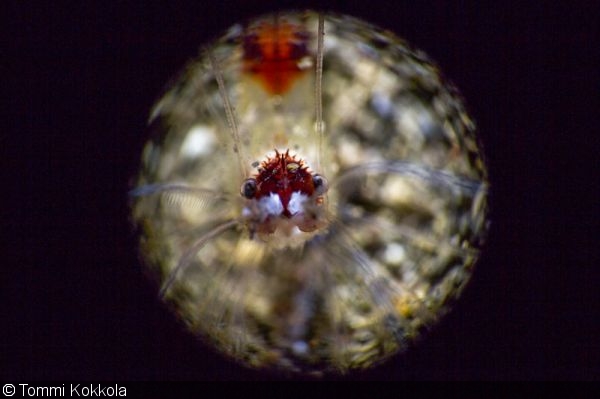 About the Author: Tommi Kokkola is an underwater, nature and travel photographer based in Taipei, Taiwan. For more underwater Taiwan, visit Tommi’s official website. For more of his reverse ring macro photography, visit this blog post or his Instagram feed.

Gefrets Gefrets wrote:
So nice photo.
You must be logged in to comment.
Support Our Sponsors
Advertise With Us
Newsletter
Travel with us