Ah, Stingray City. Having worked as a Divemaster in Cayman when not in school, this iconic photography site brings to mind less-than-iconic sensations: the sight of hundreds of tourists crowded on this small sandbar, the unmistakable smell of frozen squid we use to attract the rays, feeling my exposed upper body fry like bacon in a pan, even the intermittent shrill scream when a stingray gets a little too close to a snorkeler. Sounds like fun right?

Even though Cayman’s stingray city and sandbar has long been over commercialized, there is something thrilling about being waist-deep in water with dozens of photogenic rays that -for the lack of a better term- “feel you up.”

The Idea
I must confess the original inspiration for the shot came from another photograph taken in the same location, of the same subject,  by photographer Victor Zucker. There were several elements of this photograph that I admired- the streaking sun through sparsely placed clouds, the stingray swimming just below the rough surface, even the fact that the photographer got out of bed so early!

I think one of the most exciting aspects of planning my own shot was the opportunity to take a location and subject I have captured thousands of times, and doing something completely different. Although Victor’s image followed the golden rule of split photography –having an interesting “subject” below and above water– I felt that the stingray deserved to be as much the subject as the clouds, sun, and surface of the water. In order to make the stingray pop from the image, which was especially challenging while trying to properly expose the sky at the same time, I decided to use two strobes. 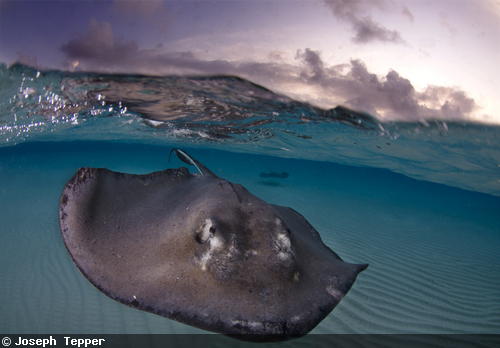 This was the shot I had in mind, but getting an "exciting" sky at the same time proved difficult

While using two strobes to light a subject only several feet below the surface may go against all common sense, the low morning light certainly would have drowned out the underwater subject without artificial light. Additionally, I chose to remove one of the strobes from my rig, place it on a gorillapod, and fire it with the Triggerfish slave device. By placing the second strobe on the sand, I was able to properly expose the top of the stingray, while also adding a dash of light to the white underside and surrounding sand.

The Shot
It takes a lot to get me out of bed before dawn, much less before 9 AM. But on that July morning, I was ready to go from the first sound of the alarm at 4. Preparing the slave strobe on the half hour ride out to the sandbar, it was strange to imagine that within several hours the dark waters below would be once again swarmed with tourists. I was never so happy to be up before dawn.

If there is one piece of advice I could offer to anyone looking to shoot at dawn or at sunset is to make a schedule and follow it. I knew that the official sunrise time was 5:45, but made sure to arrive at the sandbar by 5. This allowed me the time to set up my gear, adjust to the changing light, and become friendly with my underwater subjects. 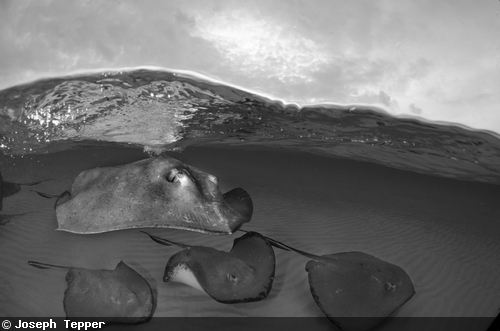 Seperating one subject from the pack was not easy!

Right on time, the sun began to crawl over the horizon just before 6, and the shooting began. To my surprise, the shot that I had envisioned proved much more difficult to make a reality. The constantly changing lighting conditions and the struggle to properly frame the stingrays became the greatest challenge. As far as dealing with the light, I made sure to keep as much detail in the sky and water by keeping a decent aperture (f8-f16), which was easy with the slow moving subjects. I found shutter speeds of 1/100-1/125 adequate to freeze the motion.

Getting the rays in the frame the way I wanted was much more difficult. I was fortunate to have a fellow photographer, captain, buddy, and stingray wrangler with me to help- Ash Sands,  founder of Elite Photographic in Cayman. The ability to have only two people in the water, work on my schedule, and dedication of Ash made this shot possible.

We discovered the best technique to bring the subject into the frame was actually to hide the frozen squid in my pocket- a trick that moonlights as a practical joke we play on tourists. While tourists might not appreciate a “squid surprise,” having the food in my pocket proved invaluable for bringing the subject towards the lens while I slid my feet backwards. In fact, if you look closely in the picture you can see my foot’s drag marks to the left of the ray. 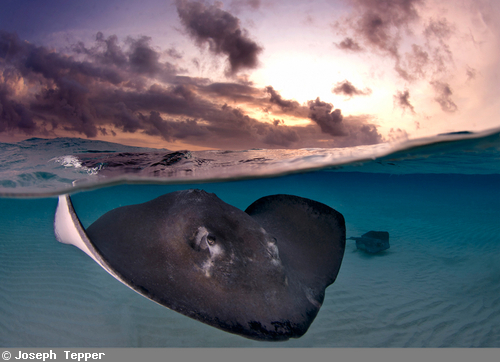 My experience at Stingray City that day reaffirmed my love for underwater photography. Not because I left with a nice image, bonded with the stingrays (a little too much sometimes); but because even after thousands of stingray images I would still get up at 4 AM to do it all over again. In fact, I plan to.

Richard Apple wrote:
Excellent article! Thanks for sharing the experience - makes me even more jealous of everyone who is currently in Grand Cayman unlike myself.

Jeffrey De Guzman wrote:
Beautiful photos and great write up. Thanks for sharing.

Joseph Tepper wrote:
Thanks to all...it was a great experience!

victor zucker wrote:
Wow, Im honored to be mentioned. My Idea came from the credo, find the light, and put something in it. I had hoped for the right sky. I waited for the light, and I took several practice shots. I use the dunk and lift half way technique. Sometimes the best shots are planned AND created. BTW, great shot!

Matt J. Weiss wrote:
You know its gotta be good to see Joe up at 4AM! Killer shot. When you gonna take me?

Joseph Tepper wrote:
Things that have gotten me awake at 4AM- Lord of the Rings Marathons, Hockey, and underwater photography...glad to see you're on the cayman side now!

Richard Wylie wrote:
Excellent article Joe! Incredible photo and I really appreciated the technical components that were combined to make it work! Cheers!
You must be logged in to comment.
Support Our Sponsors
Advertise With Us
Newsletter
Travel with us