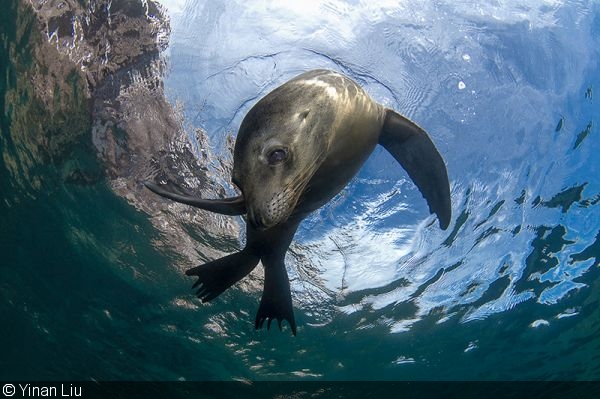 This would be a great image with a black background, but the surface and sun make it memorable

Too many photographers only like to shoot black background photos underwater. Using the sun is much more challenging, but these images are the ones that really resonate with a much wider audience. In this article, I share some of my thoughts and techniques on make use of the sun as a light source.

In general, it is ideal to shoot in natural light when it’s sunny and when the water depth is shallow. Without the complicated and cumbersome flash, your flexibility will be greatly increased—and the backscatter in the water will be greatly reduced. When you shoot with a strobe, especially with an underwater flash that does not have high-speed sync, the shutter speed will be limited by the underwater flash and affect the photo as a result. By using natural light, you are freeing yourself from such artificial constraints.

Many new photographers start out shooting macro, and they become rigidly attached to specific strobe settings. It may seem simple to switch to natural light action shots, but it can be frustrating. If you are just trying this out, there are a few simple things you can do. 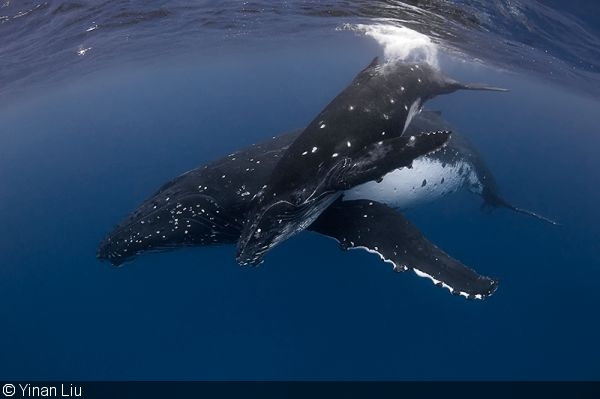 With shallow whale encounters, you need to account for the sun to get the best pictures

First, get as close to your subject as possible. Then, set your shutter speed as fast as the light allows—the faster shutter will give you sharp photos. Slow speeds can work for creative shots, but generally the blur will make the images unattractive. Also, change your shooting mode from single to high-speed continuous mode. This will allow you to fire off a lot of images very quickly, which greatly increases the odds of getting something amazing.

Some quick basic settings you can use are: Not less than 1/320s shutter speed for big animals and aperture between f/5.6 and f/13. You may find it easier to shoot Shutter Priority mode (S/Tv) when the action is fast and furious.

In ambient light images, we see the natural environment as the main focus. A model may be used to provide a subject and something that the eye is drawn to. However, the real star of these pictures is the use of natural light. It serves to showcase the impressive topographical features while providing a stunning background.

The main consideration for shooting this type of photo is working with the light. An experienced dive guide is very helpful. For instance, in cenote diving, they will know when and in which cenote the light is best. It also helps to work with a model, or use your guide to add a sense of immersion and scale to the shots. Before the dive, I establish some very simple hand gestures I will use to communicate with my model. The main thing is to keep them very basic and make them easy to see. 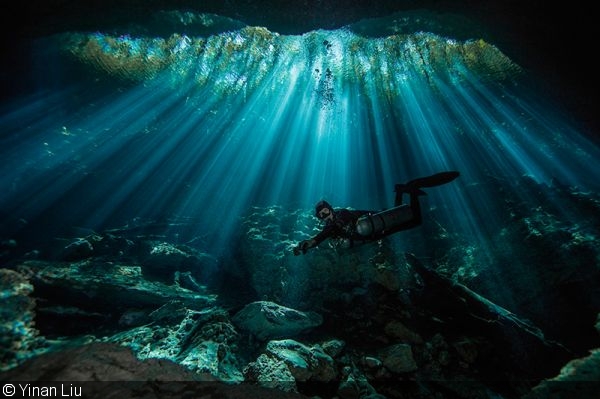 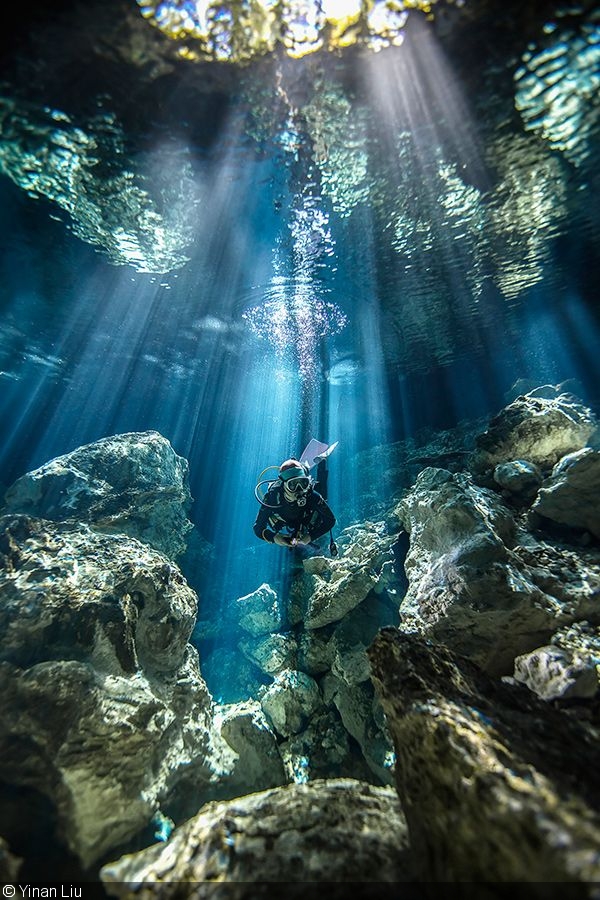 My goal in the first photo was to capture the sunburst, while preserving the trees in the background on the surface. This was a challenge, as it is very easy to blow out the surface detail. In the first photo, the settings are f/3.5, 1/320s and ISO 500, and a flashlight was used to illuminate the model's face. I set this exposure based on the brightest area, which was the sky.

In the second shot, I had a much brighter overall scene, especially up around the sky. This let me shoot without a fill light, but it complicated the camera settings. The complication was due to having several very bright areas, especially around the top edge. In the end, I settled for f/2.8, 1/125s and ISO 320.

The shot below is a classic shot of a cenote. The star of the picture is the shaft of light that is brought into sharp focus by the darkness and negative space that surrounds it. In the center, the model provides a sense of scale, as well as triggering an emotional response from the viewer. 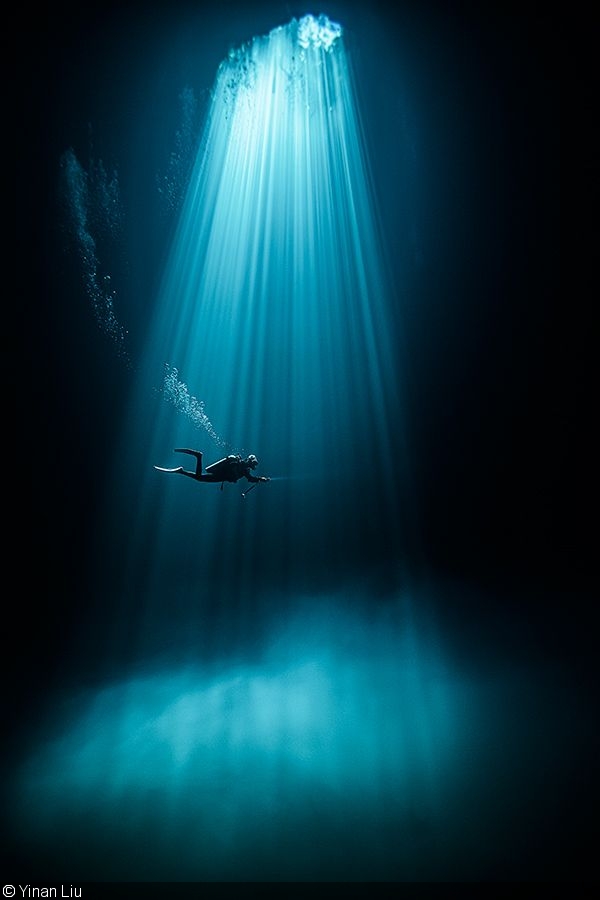 To capture this image, it took time and planning. First, it only works at midday, when the sun is at its peak. Second, we needed to find a location and an opportunity without a lot of other divers in the water. At the more popular cenotes, people are waiting in line to dive and shoot, but luckily we had a great guide who knew a (relatively) less crowded spot with far fewer people. After waiting for another group of divers to finish, we immediately got in the water as soon after noon as possible. Finding a suitable position, I gestured to let the model swim into the light and shoot. The light changes quickly, so everything took multiple takes and a lot of patience to get right.

If you want to shoot this shot, you will need excellent buoyancy control; I shot this while hovering at 85 feet. To help with the dark conditions, I bumped up my ISO to 400. There was no need to push the ISO too far, as the natural light column was still adequately bright. 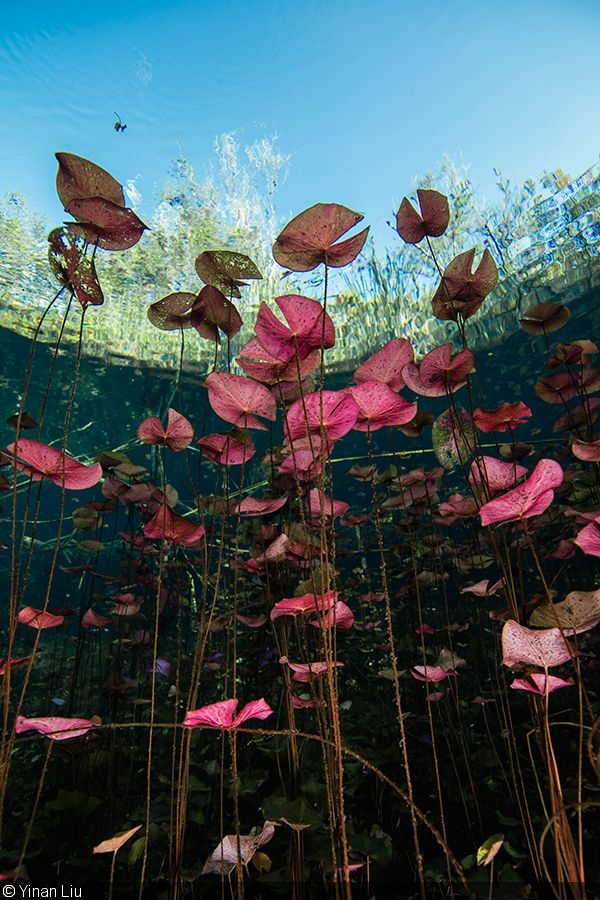 Sometimes, we ignore the simple things right in front of us. We are too often focused on the big shot or the tiny critter. This simple image makes use of Snell’s Window to create a background we don’t often see in underwater photography.

I shot this using a 16–35mm f/2.8 lens, which has a good focal length range for wide-angle subjects but still offers some zoom ability for shots such as fish portraits. You can get this shot on a single breath, as I was only about six feet deep. The challenge is getting your settings right: You can save yourself a lot of time by setting your exposure based on the sky before you even get in the water. Then, just use a fill light to expose the underside of the flowers. For a fill, I used an Ikelite DS161 on the roots of the lily, with a power setting of only about 15% of the max.

The popularity of big animal photos has almost reached the point of oversaturation, so how can you get pictures that stand out from the crowd? Aside from finding the subject, you need to put some thought into how you shoot them. Don’t just go crazy pressing the shutter; stop and think about your shot. A little thought and planning will go a long way towards making the picture pop.

In these shots, natural light is used to accent the shot and provide a nice background. By having a pleasing background, your images can really stand out from the crowd, which all too often is a subject against a basic blue background. 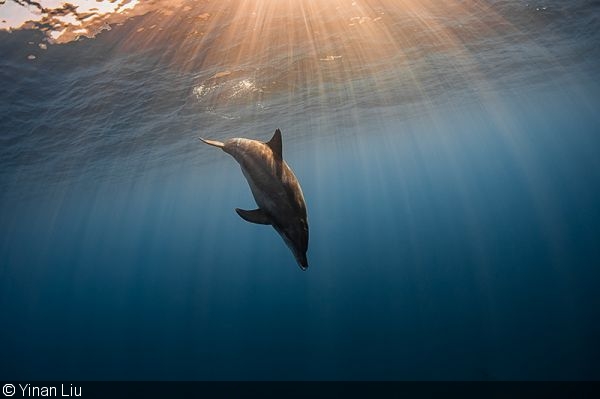 A dolphin in Japan is an incredible image, but shot during the “golden hour” makes it even better 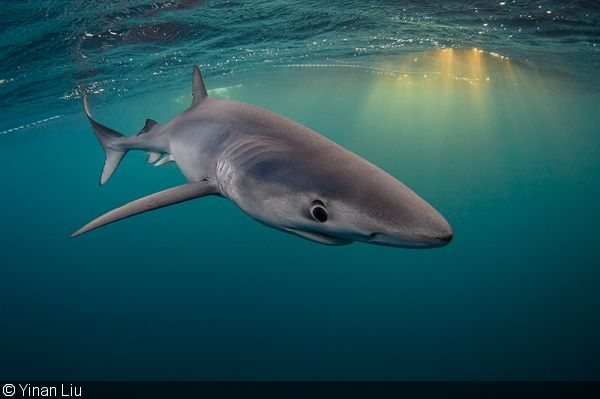 In landscape photography, the term “golden hour” is probably the single most important concept. Underwater, we are usually driven by boat schedules that put us in the water at times with terrible light topside. What do we care, we are underwater? Well, maybe we should care. By obeying the basic concept of shooting in the hour around sunrise or sunset, we can get incredible natural light underwater, too. The same shots taken at midday wouldn’t have the impact that they do in the soft, fading light of the day.

Both of the above photos were taken in the afternoon as the sun was setting. The dolphins were taken off Mikurajima, Japan, and the blue shark was taken off Cabo San Lucas, Mexico. These were open ocean shots, so they didn’t have the planning requirements of the cenotes. It’s really just all about being ready to get in the water quickly. There won’t be a lot of time to fiddle with your settings, so get those set on the boat. I used a Canon EOS 5DS R. I usually use two Ikelite DS161s, and sometimes add an Inon Z-240 for a center fill light.

Shark dives are often done on a very plain white sand bottom, and this usually doesn’t make the most appealing background. However, if you add in a little sunburst and the texture of the waves up above, it really sets the mood that you are indeed underwater and not in some subsea desert. 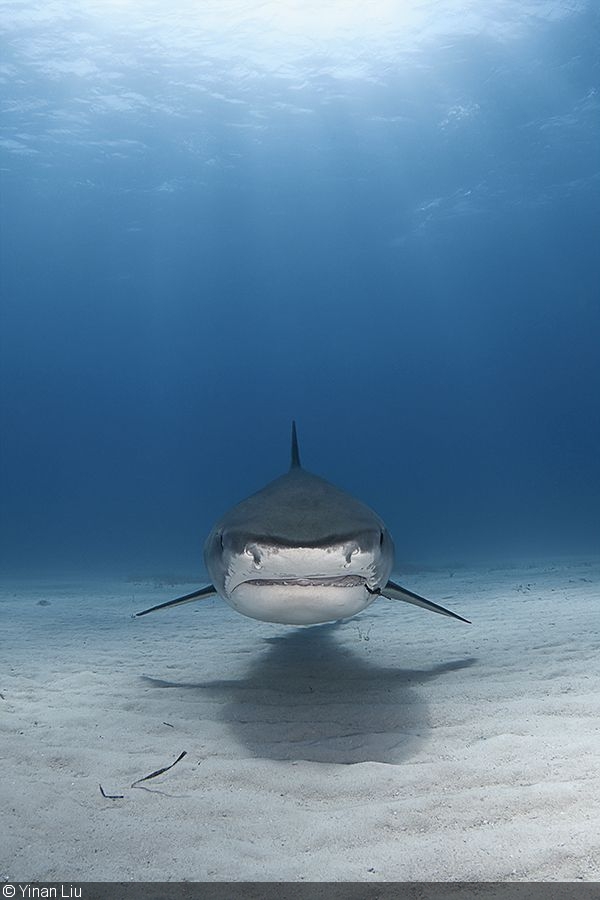 In the above shot, I was on the bottom and the natural light was not as intense. When I determine my exposure, I measure the distance between the surface, my subject and the lens. It is not a scientific process; it is just something you learn as you shoot. With less ambient light, I used my strobes, limiting myself to a 1/200s shutter speed. This shark was slow moving, so this was not a problem. However, if you are doing fast action shots, this may not be fast enough for a sharp image. My strobes were two Ikelite DS161s. Generally speaking, the flash does not need to be very strong, as we are just looking to provide some fill light. An output of between 1/2 and 1/4 power should be sufficient. 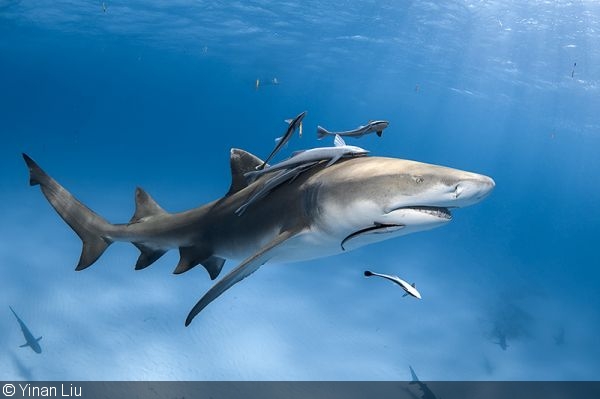 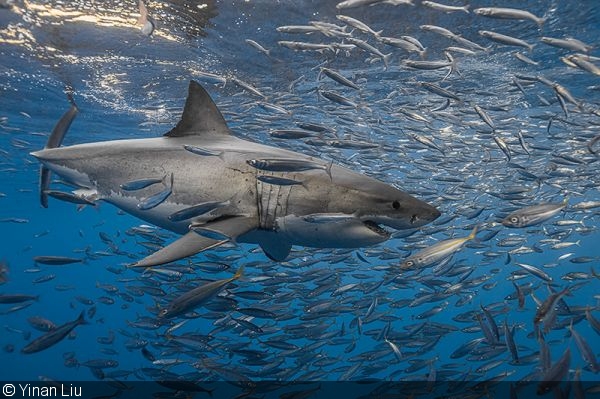 Use the powerful light of the sun to increase your shutter speed, so you can freeze the action

This shot of a male adult great white shark was taken in Guadalupe, Mexico. Because it was first thing in the morning, right at sunrise, the light is not very ideal. This shot was mostly just about luck: The action was too fast and the light, too difficult. Set your camera settings before getting in the water just in case something like this comes along!

All the shark photos taken by the guests every day are compared on the ship for scientists to study, but Interestingly, this great white did not have any of the known marks for sharks in the area, meaning that it was likely the first time it had come to Guadalupe. 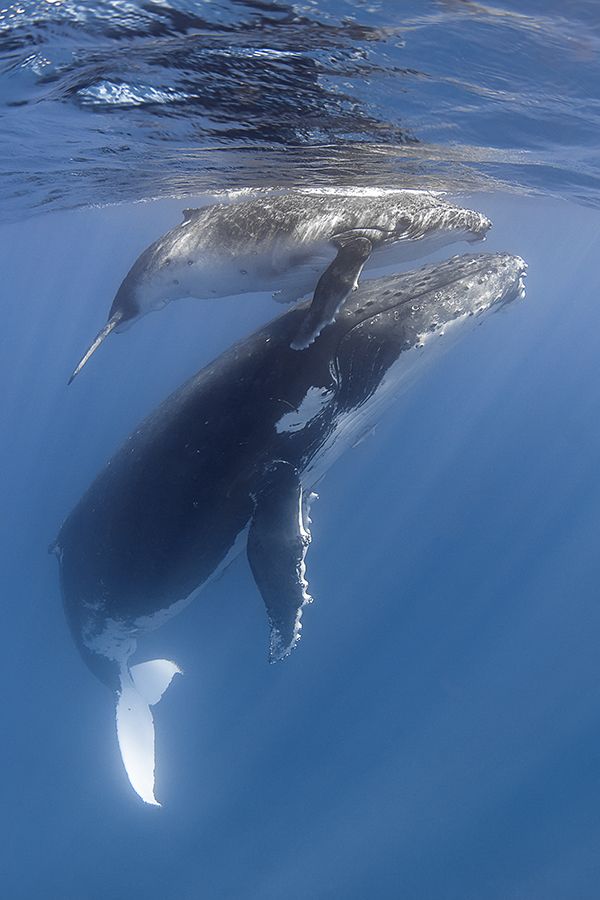 This is a bucket list photo for any underwater photographer

This final shot was taken at Vava'u in Tonga. This is a place I have been many times and it is very special to me. From July to October every year, about 2,000 humpback whales will travel back to Tonga. Usually, the big whales will rest under the water, and the little whales will rest under their fins. The small whales can’t hold their breath as long as the adults, so they will come up to the surface every three to five minutes to breathe. These intelligent creatures are also very curious and will swim to you and check you out.

The sun is the greatest light source around, yet in underwater photography it is often forgotten or merely an afterthought. But whether you’re shooting models in an interesting environment like Mexico’s cenotes or capturing big pelagics in the open ocean near the surface, you can make use of the sun to turn good images into great ones. Free yourself of your strobes entirely, bump up your ISO, and work at higher shutter speeds. Or use a single strobe to add a pop of fill light so your subject is perfectly balanced against your beautiful sun-kissed background.

About the Author: Liu Yinan was born in Beijing, China in 1980. The photography enthusiast started diving in 2008 and began shooting photos underwater three years later. He started off with a simple point-and-shoot and now uses a DSLR. His hope is that through his photos, he can let more people appreciate the beauty of the ocean and take an interest in its protection.

Romain Pateau wrote:
Thanks for sharing !

Emily David wrote:
Superb!!!!
You must be logged in to comment.
Support Our Sponsors
Advertise With Us
Newsletter
Travel with us