Stingray Split Shot
By Fabien Michenet, September 16, 2010 @ 11:51 AM (EST)
By  Fabien Michenet
In French Polynesia, and especially on the islands of Bora Bora, Moorea, and Taha'a, it is quite easy to observe stingrays while snorkeling. Stingrays can be playful and even seek contact, as was the case the day I shot this photo.
The Idea:
The conditions that day were ideal -- the sun was shining and the water was clear. Our guide, Stéphane, was set to take us to a spot where it is possible to swim with numerous stingrays. On board the boat were also to be my wife and our 4 year old daughter who was already very excited about the planned outing. We were able to get going early in the morning as Stéphane's other clients had cancelled. This also meant I would not need to move away from the group to take my pictures.
The previous photos I had taken of stingrays really satisfied me. I had some nice portraits and some photos showing the stingrays buried in sand or skimming the bottom looking for food, but none that really stood out. As such, I had decided to try to show the site and the stingrays. Our boat anchored in about 4 feet of water  in a large white sand area near the barrier reef.  It was about 10 AM and there was an abundance of light. The lagoon waters were turquoise. 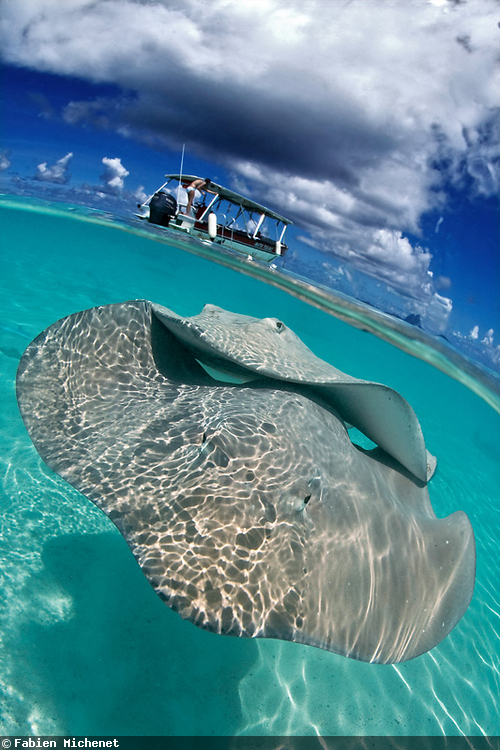 Location : The lagoon of Taha'a, French Polynesia Equipment : Canon 5D, 15mm Fish Eye, Ikelite housing with 45 degree Inon viewfinder. DS125 strobe. Settings: ISO 100, 1/200, f/18.
The Shot:
The sites where these stingrays are found is not very deep and I remembered that it was best not to wear fins as well as move away from other tourists to avoid stirring up the sand. I had also planned a weight belt so that I could take my time, lying on the ocean floor my lungs full of air. When I am snorkeling, I've noticed that even when there is an abundance of light, using a flash can be a real plus, often improving the color in the foreground as well as filling in the shadows.
Upon arrival I set-up my camera in manual mode, as I usually do. To reduce the chances of having blurred pictures, I set the shutter speed to the fastest sync allowed with my flash (1/200). As there was plenty of light, the correct opening was f/18 at 100 ISO. I set my flash to half power to avoid overexposing the foreground (like the white undersides of the stingrays, which can be real close).
The handles of my SLR housing make it easier to horizontally frame pictures, so I started by taking underwater shots framing the stingrays head-on and horizontally. To diversify my shots, I tried a vertical framing and repositioned my flash.  The stingrays were particularly curious and the ocean calm, so I shot some half water/half air photos. To avoid water droplets on the dome, I lifted the housing out of the water very slowly, giving the water time to slide off without leaving a trace.
Then I decided to include a "human" element to better convey the feeling of the site. I preferred a silhouette of a person a little farther away on the boat rather than someone close by who would be deformed by my fish-eye lens and the refraction difference between air and water.
In the end, I was able to shoot this photo with a vertical framing and the silhouette of Alexandra on the boat. I was lucky to have two stingrays head on at the time. Having a viewfinder which magnifies the image helped me compose the shot and trigger the shutter just when my eyes met that of the stingray with its two eyes head-on. Looking at the photos afterwards, I also noticed that the clouds formed a diagonal towards the peak of Bora Bora.

terry goss wrote:
really stellar shot - splits keep eluding me, and now you've frustrated me further with this beauty! :P
You must be logged in to comment.
Support Our Sponsors
Advertise With Us
Newsletter
Travel with us