Editor's Note -
Every once in a while  I see an underwater photograph that makes my jaw drop. It combines a completely original concept with flawless execution.

Such was the case when I saw the latest cover shot of Transworld Snowboarding. The shot, taken by pro photographer Scott Serfas, might be the worlds first ever underwater snowboard photograph.  I immediately wondered- how did he pull this off?

The Idea -
Ever since I first bought my water housing to photograph surfing, I had been looking for ways to use it for snowboarding. To create the shot I wanted I needed two key components -- legit snowboard action and clear water. I found a few natural locations in Tahoe near a creek but the only way to shoot it was to build some kind of rail concept and ride over the water. This didn’t excite me. So the search continued…for about 5 or 6 years.

Then I started to get jobs working with Red Bull, and they would come up with these crazy ideas and then build what they wanted. This is when I realized that I could just build the components that I needed and shoot it in a semi controlled environment. I shopped the idea around to a few different resorts for help but Bear Mountain was the only ones to show interest. After discussing the idea with them, I mentioned that the artificial lake needed to look realistic and that it would be cool to have something in the water to look at. A few ideas I had was a treasure chest, skull, golf ball and golf club or a live shark. When the mountain manager mentioned that he knew the people at the fisheries department and that he could have live trout delivered, I was sold. Order 20 please! 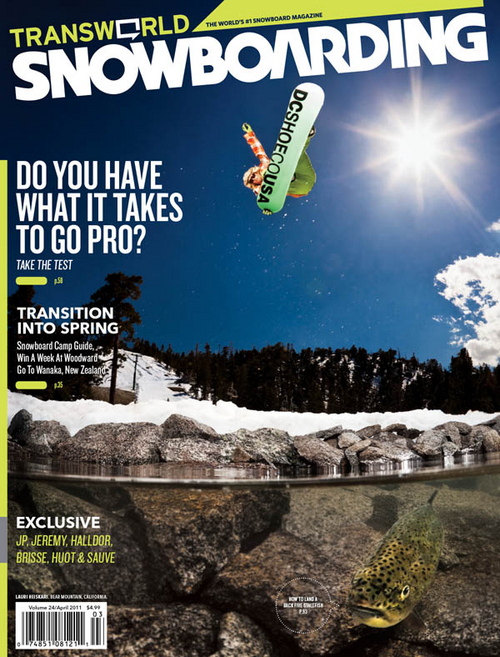 The Shot -
I showed up in May at Bear Mountain and things looked rough. Being southern California, most of the snow had melted but they assured me that all would be fine. They actually scrapped all the remaining snow in the area to build the quarterpipe. The hole for the pond was dug, there were plenty of rocks laying around to use for the perimeter and the fisheries department were on the way. Things were looking great. 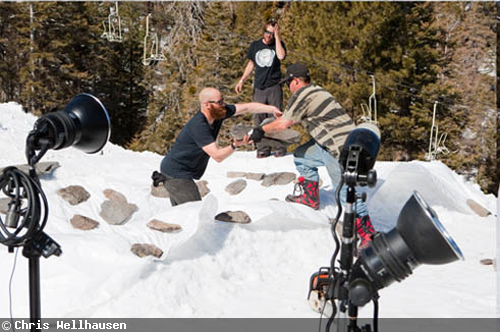 I had the housing equipped with a 20 foot custom sync cord so that I could fire the strobes from under the water using a Pocket Wizard remote. When it came to lighting the scene, I knew that I would need at least one strobe to light the fish and rocks. For this, I set up a Profoto Acute 600 at full power and directed it down, right in front of me. The idea of using underwater strobes was considered, but I didn’t think it would make much of a difference when considering the extra cost involved.

This shot was going to be backlit so I was going to need all the fill light I could get. For this, I set up a Profoto 7b, able to fire 2 strobes. I used one with a narrow beam reflector on the left side as fill light and the other head on the right side just to help eliminate motion blur. 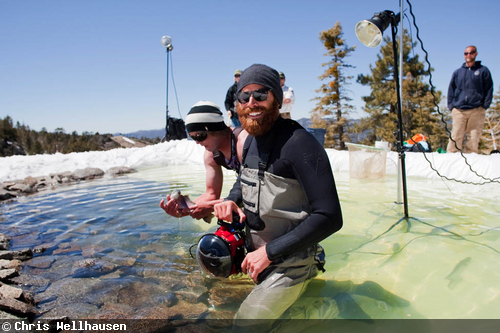 Lastly it was time to have the fish swim into the frame. I thought this was going to be easier than it was. Eventually Clayton Shoemaker jumped into the water with me to help wrangle them into position. Fish food didn’t work. I would yell up to Lauri Heiskari, the snowboarder,  every time a fish was in the frame and he would drop in.  After about 25 attempts we had the shot.

Joseph Tepper wrote:
coolest shot ever...i would kill to just be a trout in this
You must be logged in to comment.
Support Our Sponsors
Advertise With Us
Newsletter
Travel with us