With all the hype around the latest dSLR cameras capability of capturing HD video, it hasn’t taken long for both still shooters and long time videographers to try out these new versatile cameras. Lately they have been used for high end advertisement shoots, music videos and even some popular television series have recorded shows entirely with dSLRs. Underwater, they perform just as well, and with high end lenses and full HD video they are gaining popularity at soaring speeds.

I used to be exclusively a still photographer, but with my new camera, a Canon 7D, I couldn’t resist stepping into the world of motion pictures.

This Mini Series will talk about what it’s like switching from underwater photography to video with a dSLR and the problems one comes across adapting to this new style of shooting.

All of my experiences shooting video are with the Canon EOS 7D, but most of this will apply to any camera with the same capabilities, even some compact cameras. 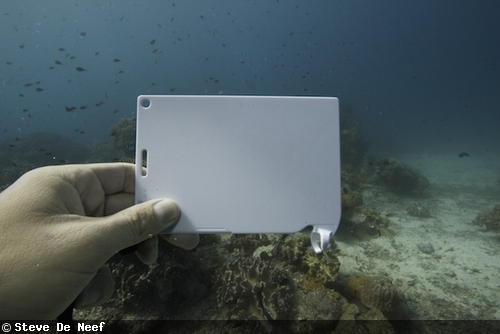 Equipment -What You Need to Get Started

If you already own a dSLR with video capability then you don’t need to spend any more money on equipment to try it out. Sure, lights, filters, tripods, and a whole range or other accessories would be nice, but I believe it’s better to try just with the equipment you have to see if you like it or not. It’s best to start with a wide angle setup, as macro will require a light and possibly a tripod.

Wide angle zooms and fisheye lenses have nearly unlimited depth of fields, making focusing easy, and are therefore, great lenses to start out with.   The Tokina 10-17mm, which is popular among underwater still photographers, is the perfect lens to start with, and lenses like the Canon 10-22mm, Nikon 12-24mm or Tokina 12-24mm are great too.

So to get started all you really need is equipment that you most likely already have: 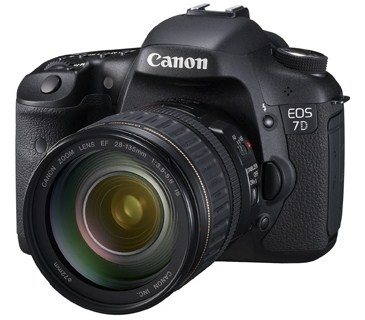 While the primary equipment may be the same for still photographers and videographers, the terminology can be quite different. A few words I came across in the beginning that I didn't really know what to do with were:

Photography terms like, aperture and ISO, still exist in videography, but there meanings are essentially the same and shouldn’t be a problem for most photographers. Shutter speed works quite differently between the two mediums, but more on that will come in part 2 of this series.


Frame Size
You have probably noticed the numbers “1080” and “720” around HD video set-ups. This number refers to the frame size in HD video, and corresponds with the horizontal side of the frame.  So 1080 means your shooting with a frame size of 1920 by 1080 pixels. It’s best to set as the frame size the highest maximum setting, as you can always downsize later on. You may 1080 being referred to as full HD and 720 as just HD.

Sometimes you’ll notice a ‘p’ or ‘i’ behind 1080 or 720. This stands for progressive and interlaced scanning. I wouldn’t worry about what this is right now.

Frame Rate
Frame rate is the amount of shots recorded per second. In the US, and countries that use the NTSC (national television system committee) standard, the normal frame rate for 720 is 60 fps (frames per second) and at 1080 it’s 30 fps. In Europe and other countries that use the PAL (phase alternating line) standard, 50fps is standard for 720 and 25 fps is common for 1080.


Most of the video that I’ve shot so far was at 30 fps and 1080p. This is great place to start. Note that the first generation of Nikon dSLRs with video were only capable of shooting in 720p.


The ratio of the frame is a bit different than what we as photographers are used to -- most SLRs will record at a ratio of 3 x 2 ,but when using video it will be 16 x 9. When looking at your LCD screen while in video mode you’ll notice that the area that’s recorded is clearly indicated, since it’s not the full screen. 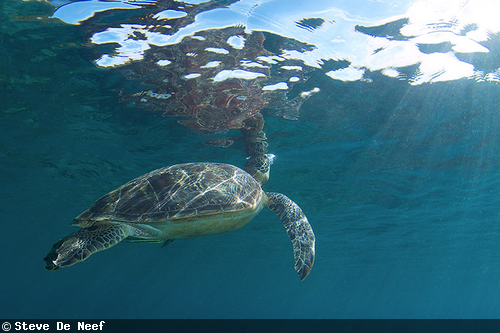 Understanding a few basic terms can help your video skills

Although I shoot in manual when shooting stills, everything I shot while getting started in video was in auto. For stills it’s very hard getting good results in auto mode, but with video your camera can do quite a good job. Newer models of the dSLRs with video can shoot in manual mode, which can give amazing results and more versatility and we will discuss this in the next installment. Any mode other then manual will be full automatic, but you can still use exposure compensation to make the scene darker or brighter.

Focusing when shooting video is harder than when shooting stills,  which is another reason why it’s not advisable to start out shooting macro, as you can expect lots of frustration and a few more grey hairs by the time you get your shot.

Wide angle is a lot easier, just focus before you start recording and most of the time you won’t have too much trouble unless you get very close to your subject. While recording, you can always adjust the focus manually, or even push the AF button to refocus, but the searching your lens will do will make part of your footage useless.  Expect to edit that out.

Newer models of dSLRs feature continuos autofocus, which will make focusing much easier.

How To Get Great Color Without Using Lights

Just like when shooting stills, if you are shooting video without lights, you will notice your footage will be very blue. Therefore, you must compensate for this color loss.  If you’ve ever shot stills using just natural light and/or filters while adjusting your white balance settings then you’re not going to have much trouble. 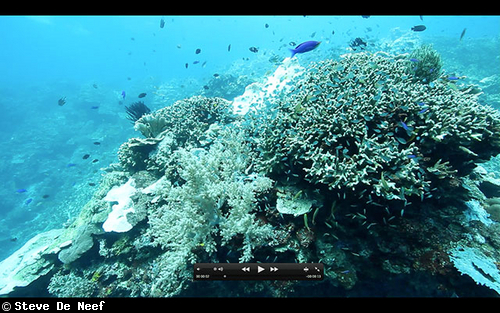 A screen shot from footage without white balancing

The best way to get great color for wide angle video is by taking a white balance reading of what you are shooting (check your camera manual on how to do this) using a white or grey slate. Ideally the sun should come from behind and your camera should be pointed downwards slightly to maximize the sunlight. 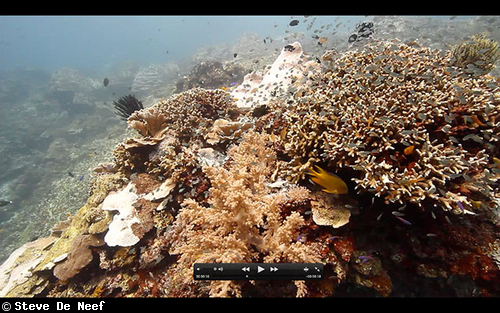 The same scene after white balancing

It’s important to do this before every shot, as depth changes colors all the time, and therefore your white point will be different at different depths. . Even the sun angle can change your color balance quite a bit. Shooting into the sun can give some nice silhouettes, but if you want your foreground to be well exposed then you’ll need lights, as otherwise the background will be washed out. Therefore, when starting out,  I recommend keeping the sun behind you unless you want to take a silhouette shot.

The next installment will discuss using filters to bring colors back.

While there are certainly significant gear and technique differences between shooting stills and video, biggest adjustment you’ll have to make is a mental one. With stills we’re just looking to get a single image or maybe a set of images that capture a moment,  but we never have to think about a sequence and how it will all fit together. With video it’s important to think ahead of what footage you want to put together and what message you want to bring to your viewer. For this reason, I find it really hard to combine video and photo in one dive. It’s far better to get into the video mindset and just focus on a good storyline. 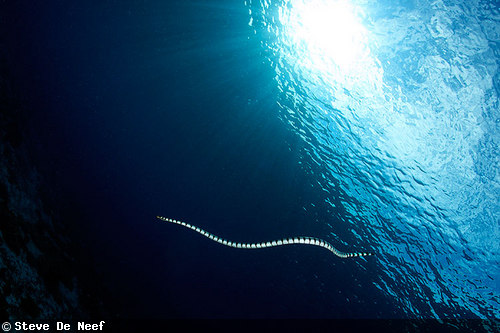 Some subjects, like this sea snake, look better on video


I’m no video expert, and these are just my experiences in switching from stills to motion. In the next parts we’ll look at manual exposures, using lights, filters, tripods, macro lenses and editing.  Go diving and try out some video, I think you’ll be surprised by the results!

Carol Cox wrote:
Wonderful article. This is just what I need for doing artificial reef surveys.

Donna A. Barrett wrote:
Nice, very relevant and easy to apply; thanks! I am looking forward to the next installment

Steve De Neef wrote:
Thanks guys!
You must be logged in to comment.
Support Our Sponsors
Advertise With Us
Newsletter
Travel with us