There are many different ways to capture the underwater world on camera.

Some divers love bringing their cameras down with them just to document what they see on their dive. Others create photographs that are true pieces of art, whether it’s of the smallest critters of the sea or the largest animals that ever lived. Even fashion photography has found its place underwater.

But I love taking images that can make a difference—conservation photography that that creates awareness and touches people. Whether to establish a marine park or stopping mangrove being cleared for another development few media grab as much attention than powerful photography. And with modern cameras’ capability of shooting stunning HD footage as well as still images, story-telling options are even greater these days. 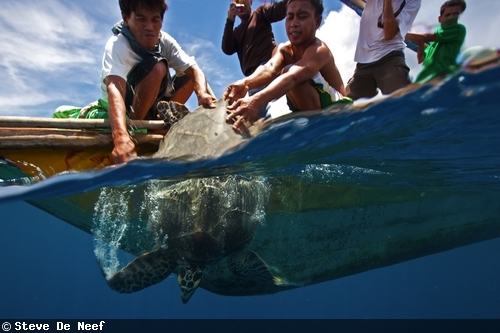 Shooting for an NGO

One of the best ways to create stunning conservation images is to team up with a Non-Governmental Organization (NGO) and/or scientists. I truly believe if a talented photographer works together with scientists and NGO’s then the conservation achievements can be amazing.

Since the beginning of 2012 I’ve been working alongside scientists and volunteers of the LAMAVE (Large Marine Vertebrate) project, an NGO based in the Philippines, which focuses on conservation, research and education. Together we’ve accomplished quite a lot in a short time, from releasing turtles in captivity and stopping a turtle head-starting program, to educating communities about cetacean stranding procedures and creating more awareness about whale sharks in the Philippines. 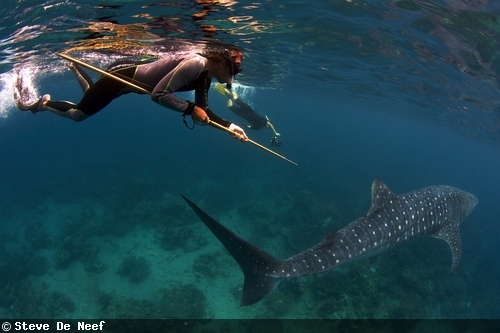 Two researchers from the LAMAVE project getting a biopsy sample and photo ID of this whale shark, both important parts of whale shark research.

The power of images is simply amazing. Last year a reef near where I live in the Philippines had a massive crown of thorn outbreak, and through publishing images of this outbreak on social network sites and getting it in local newspapers we managed to raise enough funds and gather volunteers to deal with this outbreak. Within two week over 20,000 crown of thorn were removed of the reef.

Documenting the activities of an NGO can take you to some pretty cool places you normally wouldn’t visit as a recreational underwater photographer. Being part of ocean-related research gives you photo opportunities you would otherwise never have. 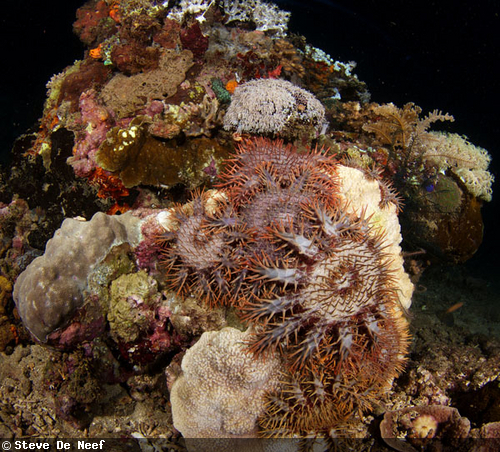 After pictures of this crown of thorn outbreak hit the newspapers and social network sites, enough funding and volunteers were found to deal with the outbreak

Off course it’s not always pretty: Nobody really likes to shoot dead sharks, shark fins or destroyed reefs but it’s these images alongside images that show the beauty of our blue planet that can inspire change. But having your photography be part of something that makes a real difference can feel better then winning any contest in the world. 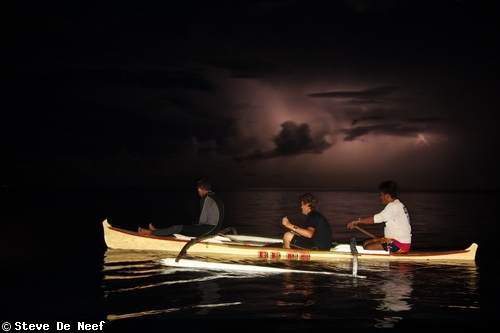 Long hours in the water is common when doing research, still looking for whale sharks at night while a storm is approaching 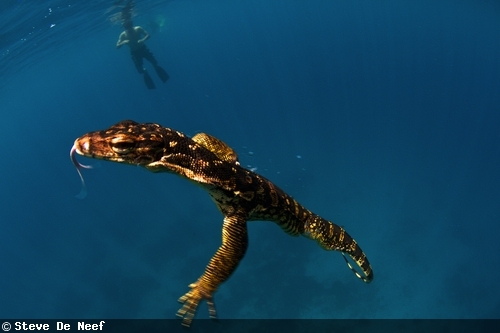 Long hours in the water also means more chances of rare encounters, we found this water monitor lizard while looking for whale sharks 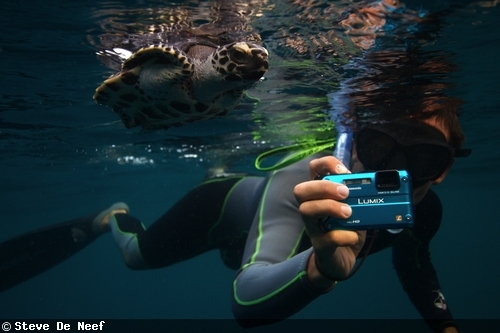 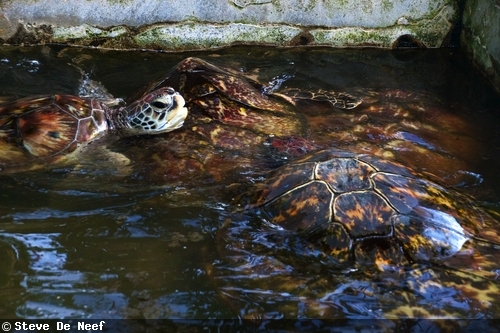 Shooting with conservation in mind requires a more documentary style approach—you really want your images to tell a story. You must know your subject really well, which usually involves hours of research before getting your camera wet.

The majority of information can be found on the Internet, especially scientific papers that are a great source of information as well even if you don’t understand all the scientific terms. It is also helpful to contact as many experts as possible; and I’ve found most experts in their field don’t mind sharing information especially if it’s conservation related.

This is another reason why I love this kind of photography. You don’t just get unique shots that can make a difference, you also gain a lot of knowledge about your subject, and it’s like going to school again. 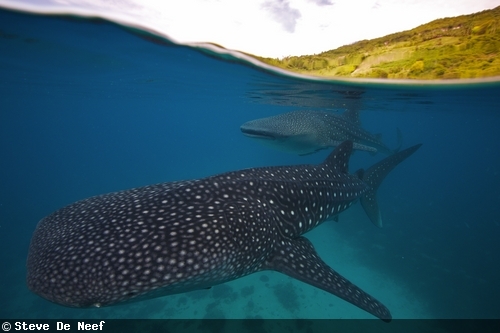 Have a plan and write down the goal of the shoot, making sure to keep in mind the images you need to tell a captivating story. Write down all the different images you want to get and make a shot-list. Being prepared and knowing exactly what kind of pictures you need will allow you to focus more on getting the right compositions and exposure once you’re out shooting. Without a shot-list it’s easy to forget some images that contribute to the story.

Plastic is major problem for a lot of marine life, having the whale shark there has a bigger impact then just the plastic. This is taken in an area where they feed whale sharks for tourism; unfortunately the plastic bags they keep the food in fly overboard a lot. 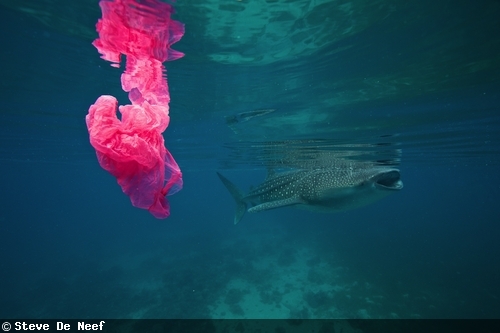 Never postpone a shot you just saw. Too many times I’ve told myself I’ll just get that shot later and it never happened.

It can take a long time getting all the shots you need, so patience is a valuable asset in conservation photography. If you’re dealing with people, gain their trust first and then shoot when everyone is more comfortable. For quite a few shots I’ve had to work with fishermen, and once they know what I was doing and gained their trust it was much easier working with them. 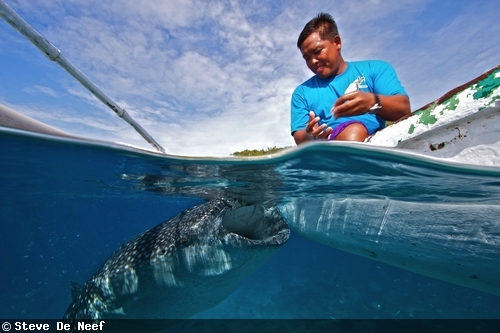 This is one of the fishermen of Oslob where they feed whale sharks, getting to know him and explain what I was doing allowed a more intimate portrait

The equipment you need depends a lot on what subjects you will shoot. A DSLR that works well in low light conditions, is robust and weather sealed, focuses very quickly and can shoot continuous relatively fast will be a big help. Even when not diving or snorkeling, having a weather-sealed camera will be a great advantage in often wet, and unpredictable environments.

Most of the time you won’t get many chances to get the shots you need so a good autofocus system and fast lens can do wonders. If you shoot continuous, chances of getting that one perfect shot are greater. I’ve worked in fish markets a lot and even in zoos with dim lighting conditions so a camera that performs well with higher ISO’s is great. Having a camera that shoots great HD video opens up story telling options, some things just look better in video.

As I often shoot and check out fish markets a camera with good low light capabilities is a big help. Here we were taking some samples to check if it was manta or mobula ray. In the Philippines manta is illegal to catch while mobula rays are not protected yet.

Wide-angle lenses can tell the whole story better then close up lenses as they show you the whole scene. About 90% of the time I’ll have a fast wide-angle lens on my camera, but off course it depends a lot on what you are shooting. In general I would bring one wide angle (16-35mm f2.8) and one medium (24-70mm f2.8) range lens. 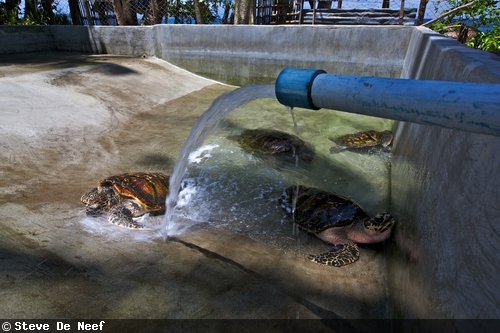 In general, wide-angle lenses give you a better view of the whole scene. Sometimes shooting a bit tighter can be more dramatic like with these mobula ray fins

A sturdy underwater housing is a must, when documenting an NGO project or any other conservation work the luxuries of a dive resort and well equipped dive boat can be far away. On many occasions even rinsing your housing can be tricky, so be prepared with backups and above all, use a system you can trust.

Over-under shots can tell a story very well to the average viewer by providing a link from the topside to underwater world. To achieve good over-under shots you need a very wide lens and big dome port. The bigger the dome port the thinner the water line visible in your shot will be, glass domes have less problems with water droplets then acrylic one. 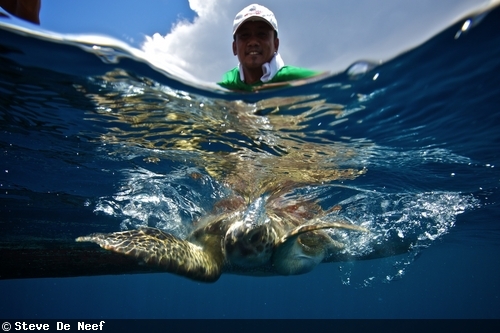 Over-under shots are a great way of telling a story, like with this turtle release, pictures like this are easier with a big glass dome port

I personally don’t use strobes and lights all that much when shooting documentary style images, mainly because it tends to take more time getting the right lighting and I love the natural look of ambient light photography. When there is no good natural light available then off course strobes or lights will improve the quality of your shots dramatically.

The little things also matter. Good dry and gear bags will make traveling a lot easier and when on a boat can keep your gear dry. And always carry spare batteries and memory cards to change “on the fly.”

Putting the Images to Good Use

Conservation photography doesn’t stop after the images have been shot. It’s really only the beginning. Getting the pictures to the right kind of people is what really matters. This can mean publishing an article or photo story in a magazine, website or on social network sites to create more awareness and reach as many people as possible.

It could also mean getting the images to the right government officials or environmental agency to deal with a certain problem. Images can also be used to bridge the gap between scientific research and the general public. Seeing images that tell a story about ocean related research is far more interesting to the general public then reading scientific papers. 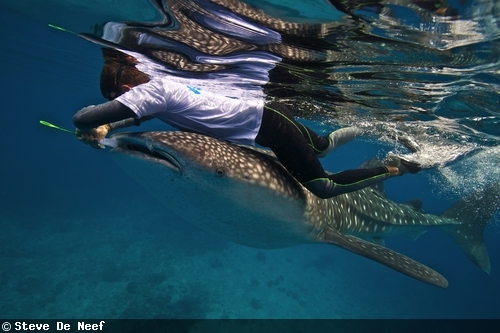 While not too many people will read a scientific paper about whale shark research, images like this spark interest in what is going on. Here a researcher is collecting copepods for DNA analysis that can tell us more about population genetics

While shooting for an NGO or just covering conservation issues on your own can be far away from the luxuries of your average diving holiday, it is by no means less rewarding. Going out and covering a topic that you’re really passionate about and then actively use your images to create more awareness and help conservation of your subject is one of the most rewarding things in photography. 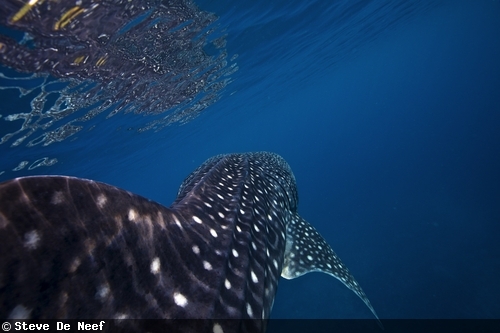