DPG would like to thank SeaLife Cameras for supplying the Sea Dragon 4500 photo/video lights, DC2000 camera, and accessories used in this review. 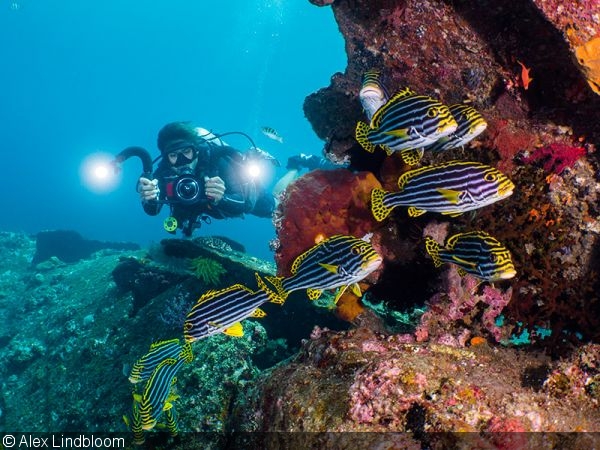 For years, SeaLife products have been the go-to choice for those starting out in their underwater photography and filming endeavors—and for good reason. SeaLife’s simple, yet durable designs and intuitive functionality provide those who have little to no experience using a camera underwater with the tools to create beautiful underwater images and video with, almost literally, just the push of a button.

The 2016 introduction of their DC2000 waterproof camera—offering a modern one-inch Sony sensor, full manual control, and RAW capability—signaled that SeaLife had begun targeting the more-accomplished shooter. This gradual shift recently culminated in the release of their most powerful photo/video light yet—the Sea Dragon 4500—aimed squarely at the professional market. With its impressive 4,500-lumen output, color rendering index (CRI) of 96, and 90-degree beam angle underwater, this light aims to cater to the needs of working underwater videographers tackling large subjects like reef scenes, fish schools, big animals, and wrecks.

Working as a videographer for the past eight years has given me the opportunity to use a variety of video lights, and I was curious to see how SeaLife’s top-of-the-range model would hold up against other pro lights on the market—especially given the company’s history of offering more entry-level gear. 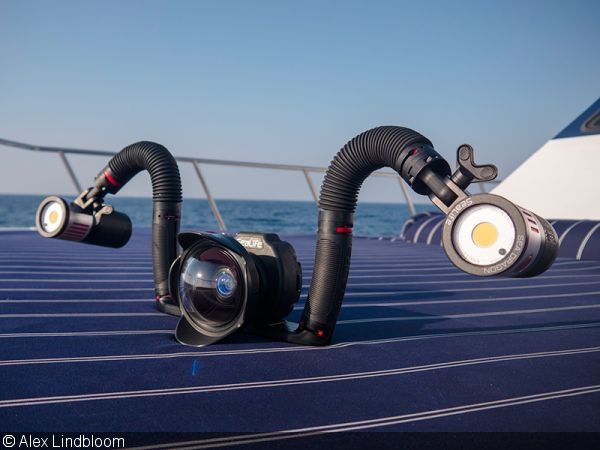 The Sea Dragon 4500 lights fit naturally into the SeaLife ecosystem, where everything, quite literally, snaps together—a welcome change from the seemingly endless sea of arms, clamps and screws

The Sea Dragon’s maximum output of 4,500 lumens is a big step up from the 2,500 lumens offered by the next most powerful light in the SeaLife lineup. This extra brightness will really help bring out the natural colors of larger subjects.

The light array in the Sea Dragon 4500 take advantage of the latest COB (chip on board) technology as opposed to the traditional LED array used in other lights. The more sophisticated COB LEDs promise to help produce a nice evenly dispersed beam, which SeaLife gives as 90 degrees underwater (120 degrees in air). The remarkably high CRI value of 96 should also impress those seeking a light source that closely resembles that of natural sunlight. 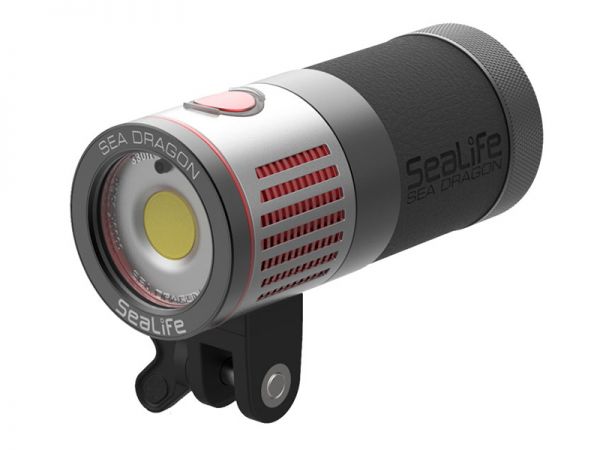 Where functionality is concerned, SeaLife has really made use of the light’s single button, which cycles through the various modes and brightness levels. Consecutive presses of the button give you the manual power levels (100%, 75%, 50%, and 25%). Hit the button again and you’ll switch to Auto Bright mode, which automatically adjusts the light’s brightness depending on how close a subject is.

As with other Sea Dragon models, there’s also Auto Flash Detect mode, where the lights will automatically shut off momentarily when a nearby flash fires, thereby reducing any backscatter caused by the light. The final mode—which hopefully you won't ever need to use but should be glad it’s there—is the emergency signal mode, which repeatedly blinks out “SOS” in Morse code.

The Sea Dragon 4500 is powered by a single 50Wh Li-ion battery, which will run for a full hour on full power without any drop in light output towards the end of the battery's cycle, or for four hours at quarter power. The battery compartment, protected by dual O-rings, is easily accessed by unscrewing the back. I was particularly pleased with this feature as you can have a second fully charged battery ready to go for those quick surface intervals where recharging is not an option. 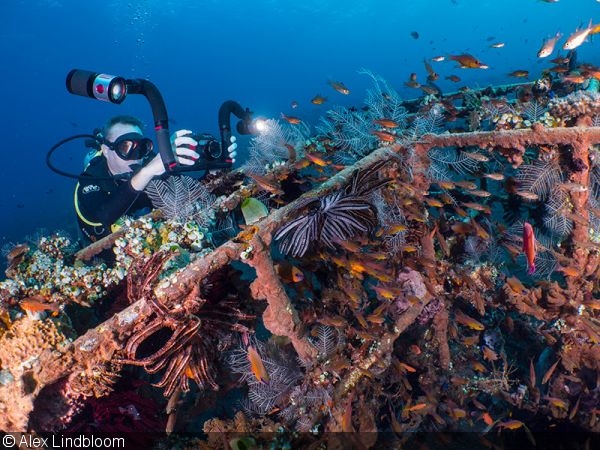 After shooting the artificial reef in Tulamben’s coral garden with SeaLife’s DC2000 and Wide Angle Dome Lens, Alex’s buddy Sven switches to the Super Macro Lens for some close-ups of the sweepers. The one-button control on the lights make it quick and easy to adjust the power as needed in each case

2. Ready to Take on Any Subject

SeaLife was kind enough to send me two Sea Dragon 4500 lights, the DC2000 camera, along with their new 0.5x Wide Angle Dome Lens and Super Macro Lens. I was also provided all the various mounting options, including the standard YS mount and Flex-Connect YS adapter for the SeaLife Flex-Connect system, but also the one-inch ball joint adapters that allowed me to use the lights with my Panasonic Lumix GH5.

For the first part of my test, I used my go-to dive center in Bali, All 4 Diving Indonesia, as they offer regular daily trips to all of the province’s top sights, like Tulamben’s Liberty Wreck, Amed, and of course Nusa Penida and Lembongan, where that giant wobbly silver disk of a fish rises from the deep blue for a couple of months every year. I’ve dived with All 4 Diving Indonesia on multiple occasions in the past and just about all of my trips with them have resulted in up close encounters with the elusive sunfish—and not another dive group in sight thanks to their superior guides. While a Mola ramsayi sighting wasn’t relevant for the review, I still had high hopes for one more private encounter—just because they are awesome.

While a week diving around Bali was more than enough time to get a feel for the lights, I decided to take the test setups with me on another week in Komodo with one of Indonesia’s most-reputable liveaboards, the MV Mermaid II, whose trips include not only Komodo, but surrounding islands like Sangeang. Both Mermaid I and Mermaid II’s Komodo trips depart and finish in Bali, so I had no need to book extra flights and risk losing my equipment in that black hole that is checked baggage. 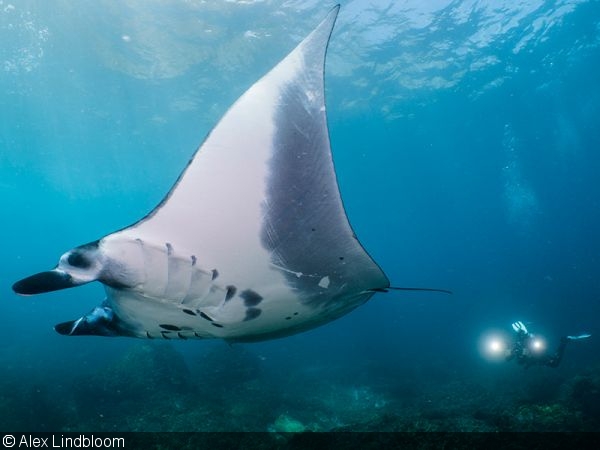 Bali and Komodo made ideal testing grounds for the Sea Dragon 4500 lights. The dive sites are very accessible, while the subjects are highly varied and predictable

The single control on the Sea Dragon 4500 functioned just as it should: The button’s large size and location on the light made it easy to find and cycle through the different modes—although I used it almost exclusively at its maximum output. The light would be easy to operate even if you were wearing thick gloves.

I was also very happy with the battery’s lifespan between charges. Even when doing three dives with no time to charge in-between, I always had enough juice, as long as I turned the lights off when I wasn’t using them. When I did have time to recharge the batteries, it was a very quick and painless process with the included charger, and I never had to wait more than an hour for them to be ready to go again. (This is despite the stated charge time of two hours and 15 minutes, which is presumably the time it takes when the battery is completely drained.) 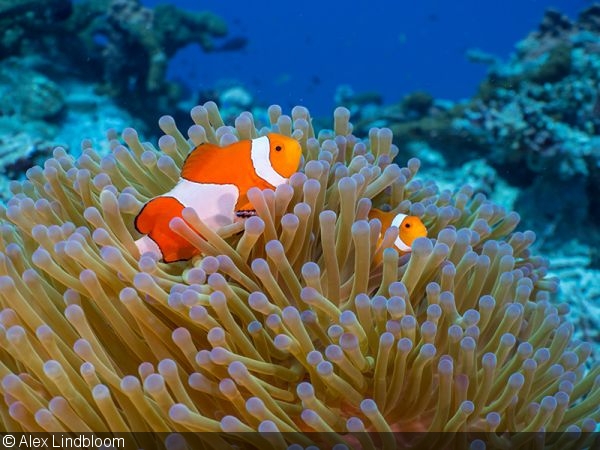 The high quality of the light emitted by the Sea Dragon 4500 really brought out the natural colors of subjects such as this false clown anemonefish, making the job a lot easier when it came time for post-production (Panasonic GH5, Panasonic G Vario 14–42mm, Nauticam WWL-1, f/5.6, 1/160s, ISO 200) 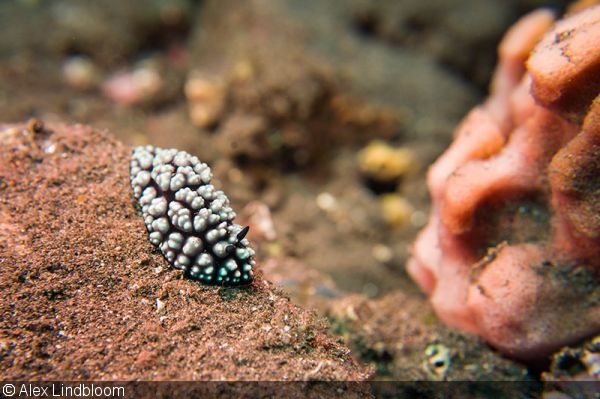 Using the SeaLife DC2000 in automatic exposure mode, this nudibranch was isolated from its mucky background by reducing the power of the lights so that the aperture would open up and give the desired bokeh effect (SeaLife DC2000, SeaLife Super Macro Lens, f/1.8, 1/200s, ISO 125)

4. A Wide, Powerful Beam with a Natural Quality

Top ↑
The Sea Dragon 4500 lived up to its spec sheet, with the dual 4,500-lumen configuration proving to be a sufficient amount of light for most subjects

The Sea Dragon 4500 lived up to its spec sheet, with the dual 4,500-lumen configuration proving to be a sufficient amount of light for most subjects with no noticeable hot spots. Despite being somewhat sceptical about the importance of CRI values, I did find the light quality to be noticeably warmer than that of other video lights I’ve used in the past—illuminating subjects in very natural tones, as opposed to the more “fluorescent” light associated with lights offering lower CRI values.

For wide-angle shooting scenarios, I achieved great results with all but the very largest subjects, and at a variety of depths. The lights proved to be at their best in lower-light situations when ISO had to be bumped up a little, thereby making the lights seemingly stronger. In these situations, I was able to take full advantage of the coverage provided by the lights’ 90-degree beams and nail shots of big animals, expansive reefscapes, and large portions of wrecks. 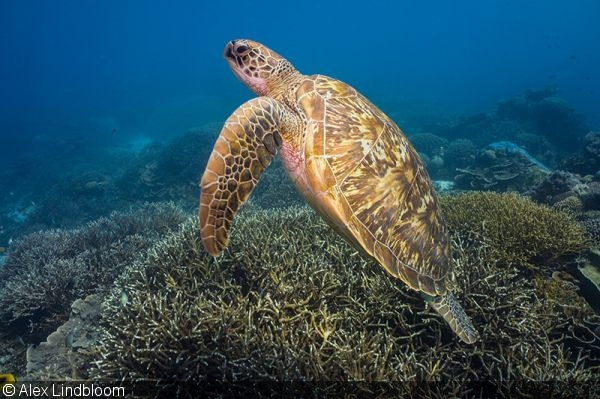 By using both lights and selecting the Snorkel white balance setting on the SeaLife DC2000—which adds just a bit of red—I was able to achieve nice results in areas with a lot of natural light and larger subjects such as this green sea turtle (SeaLife DC2000, 0.5x Wide Angle Dome Lens, f/1.8, 1/125s, ISO 125) 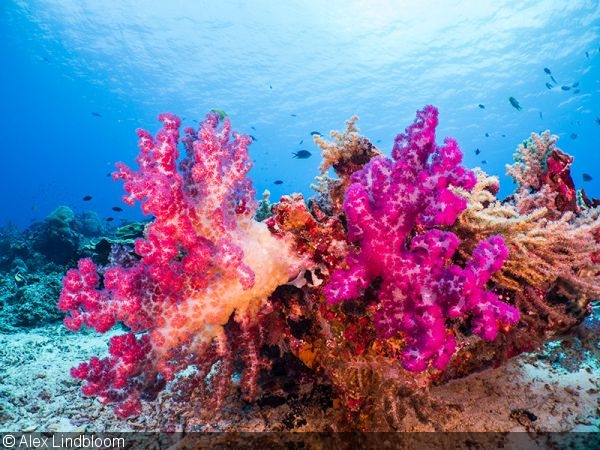 For very sunny conditions near the surface, just about all continuous lights are overwhelmed by the ambient light. Here, the Panasonic GH5’s custom white balance was calibrated to introduce some additional reds and allow the lights to bring out the darker purples of the soft coral (Panasonic GH5, Pansonic G Vario 14–42mm, Nauticam WWL-1, f/5.6, 1/125s, ISO 400)

I was even able to make use of the lights in the shallow reefs on sunny days, something even the most powerful lights struggle with, as the sun will almost always outshine your little light-in-a-can. By using the Snorkel mode on the DC2000, or by using a preset custom white balance calibrated at four meters (13 feet) on my GH5, I was able to get a nice natural color to the reef, and then use the Sea Dragon lights to enhance the foreground and fill in some of the darker shadows.

A highlight reel filmed off Bali and Komodo using the SeaLife DC2000 and Panasonic Lumix GH5, each with dual SeaLife Sea Dragon 4500 lights. The overall power of the Sea Dragon 4500s combined with the warm, natural quality of light made it possible to shoot just about anything with outstanding results

Top ↑
With the lumen count and the natural quality of the light, as well as the thoughtful design and decent battery life, SeaLife has really delivered with this new light

With the lumen count and the natural quality of the light, as well as the thoughtful design and decent battery life, SeaLife has really delivered with this new light. It’s evident the company is really trying to include serious hobbyists and professionals into their target market with the Sea Dragon 4500.

It’s true that the price of the Sea Dragon 4500 is slightly higher compared to other lights with similar power, but I’m a believer in you get what you pay for. Many of the cheaper lights feature standard LED arrays and therefore lower CRI values, or inaccessible batteries with external charging ports that will corrode over time. The superior quality of the light and the well-thought-out design of the Sea Dragon 4500 should justify the extra money spent and give you the confidence of having a light that is well suited to just about every shooting scenario. 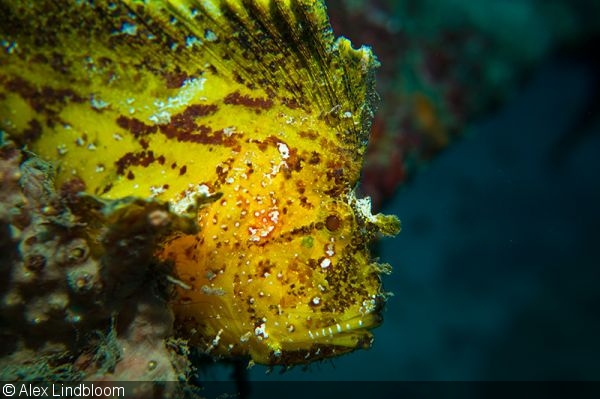 By using the edges of just one light on medium power, it was possible to direct light onto this yellow leaf scorpionfish, isolating it from its background. Shooting macro stills with a continuous light, rather than strobes, is a breeze, giving you a “live view” of your image before you hit the shutter (SeaLife DC2000, SeaLife Super Macro Lens, f/1.8, 1/250s, ISO 125)

About Alex Lindbloom: Alex is an award-winning underwater photographer and videographer originally from Boise, Idaho and Seattle in the USA. His work has been featured on the Discovery Channel, in various dive magazines, on display in the United Nations building in New York City, and even on a 100-foot monitor in one of Jakarta’s skyscrapers. After leaving the States in 2010 to pursue film and photography in Asia, Alex quickly fell in love with the never-ending diversity of Indonesia, where he has lived and worked since 2013. www.alexlindbloom.com

tyr gungnir wrote:
thanks for sharing
You must be logged in to comment.
Support Our Sponsors
Advertise With Us
Newsletter
Travel with us