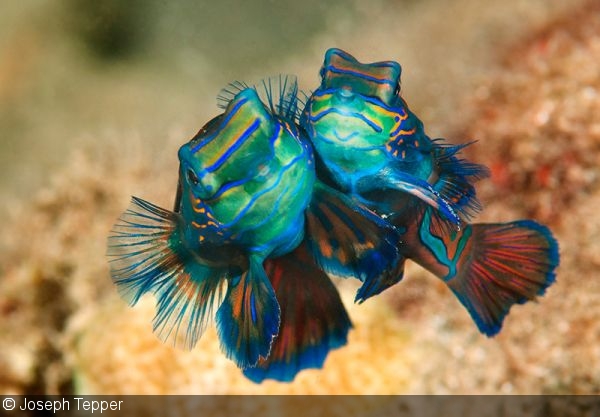 A pair of mandarinfish come together for a nightly mating ritual

There is perhaps no more of an iconic macro underwater photography image than one of a pair of mating mandarinfish. This image is beautiful for a number of reasons: the uniqueness of the behavior, the brilliant appearance of the fish, and the rarity of the combination of the two. But as any underwater photographer who has such an image in their portfolio can attest, this image is one of the most challenging you will ever take.

When it comes to capturing images of underwater marine life behavior, there are three primary categories: predation, symbiosis, and mating/spawning. Of the latter category, the nightly courtship of mandarinfish is one of the most prized. Fortunately, it’s not particularly rare; it is, however, very difficult to photograph (more on that later).

Mandarinfish tend to live in shallow areas of rubble or in dead hard coral structures. On most nights for select months out of the year, mandarinfish engage in a particularly special mating ritual. It begins around dusk when the smaller females gather to watch the bright courtship display of the larger males. You will see the fish becoming more and more active as it gets later. Typically totally concealed inside coral or rubble, the fish will begin to venture out as the mating ritual gets ”serious.” 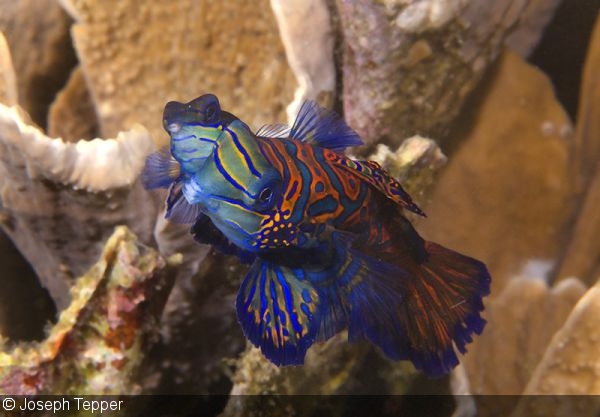 Once a female has been impressed by a male, the two will come together cheek to cheek (actually belly to belly) and rise about a foot above the reef. This has the appearance that the two are kissing. In an instant, the fish release sperm and eggs into the water column and retreat back to the reef. The male may continue to search for more mates.

The moment is beautiful, but it is also fleeting. As such, photographers must be prepared with the right gear and mindset—and a bit of luck—to nail the shot.

This behavior shot is one instance that demands a more-advanced camera. The ability to autofocus fast in low light is critical for having any hope of taking home a pin-sharp image. This really gives the advantage to mirrorless and DSLR users. For these cameras, you’ll need a longer focal length macro lens, as the fish are small and tend to be quite shy. You will be forced to shoot from several feet back—rather than several inches away as is typical with most macro photography. Stick to macro lenses with focal lengths from 75–105mm (35mm equivalent). 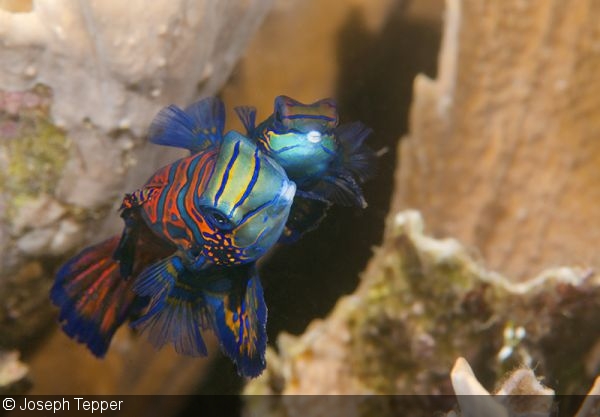 This doesn’t mean the image can’t be captured with compact cameras. But you will need to rely solely on the built-in lens without the added magnification or reduced focus distance of a wet lens macro diopter. This is one of the rare instances when using the zoom of your compact’s lens is acceptable. But only zoom as little as is needed to fill the frame with the fish; getting as close as possible will make strobe lighting much easier.

One special piece of gear recommended for photographing mating mandarinfish is a focus light with a red light setting. At the very least, you’ll need a basic focus light. The low sun will lead to dim conditions and your camera’s autofocus will struggle mightily without one—not ideal with a behavior that lasts only a couple seconds. Notoriously shy and light sensitive, the mandarinfish seem to be less bothered by the red light produced by higher-end focus lights. 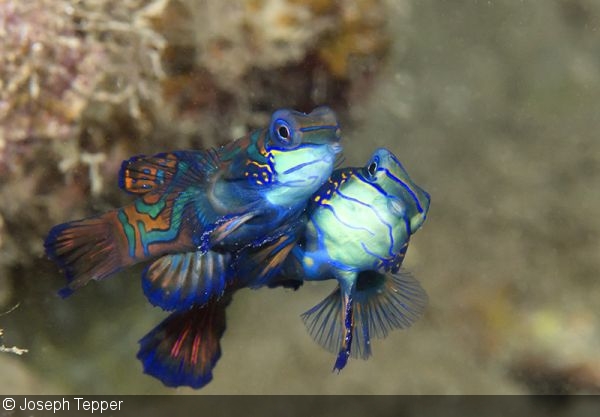 Get There Early: The mating itself lasts a matter of minutes, but it’s best to get to the dive rather early—up to 30 minutes before the event itself. This will give you plenty of time to identify areas on the reef with the highest concentration of females. The last thing you want to do is rush to the scene and mess up your settings.

Practice and Adjust Settings: Getting to the mating spot early is the perfect chance to fine-tune settings before the mating begins. Start with a relatively closed aperture—f/8 to f/11—and a moderate shutter speed around 1/125s. One thing to keep in mind is that during this time of the day, the lighting conditions darken quickly. One strategy is to maintain a higher ISO to compensate for this and to leave the camera in shutter priority mode. You may note the shutter speed slows slightly as the sun sets, but this won’t have an impact on the exposure from your strobes.

Back Button Autofocus: More-advanced shooters can simplify the focusing process by taking advantage of back button autofocus, instead of having to constantly half-press the shutter as you wait for the fish to come out of hiding and mate. With back button autofocus, you shift autofocus from the shutter release to a customizable button on the back of the camera—which your housing has located conveniently under the thumb. Now you can press the custom buttom to focus, and when the mating is in full swing, hit the shutter—unimpeded by the half-press autofocus. 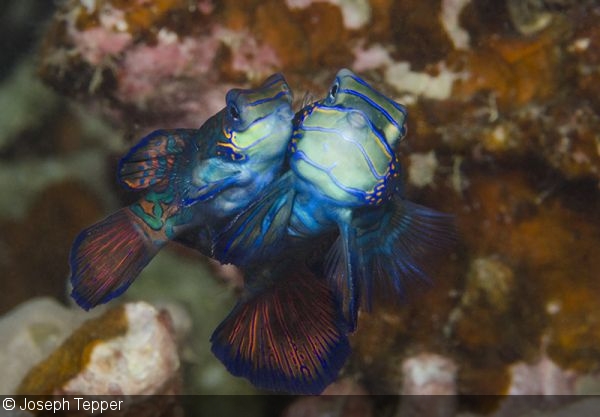 Rapid Fire: Keeping your strobes on a lower power will also open up the opportunity to shoot a series of shots in rapid succession. Housings with electrical strobe connections (or electrical-to-optical conversion and fiber-optic connections) will have the edge as they aren’t limited by the time it takes for the camera’s in-built flash to recycle. Combining this with a low-speed continuous mode (around 3fps) will give you the best chance of nailing the decisive mating moment.

Focus on Females: The best mandarinfish dives have multiple mating pairs to choose from. This is especially important if there are several photographers vying for an image. One strategy is to follow the females, as these are the true targets of the males.

Keep Background in Mind: The background for mandarinfish dives often isn’t pretty, typically being composed of dead coral or rubble. With a longer focal length macro lens, f/8 should blur the distracting background enough to give you an attractive bokeh. Opening up the aperture more to reduce depth of field is risky given the conditions and quick moving action. Alternatively, try to get as low as possible and shoot up to catch the fish against a more open-water background. 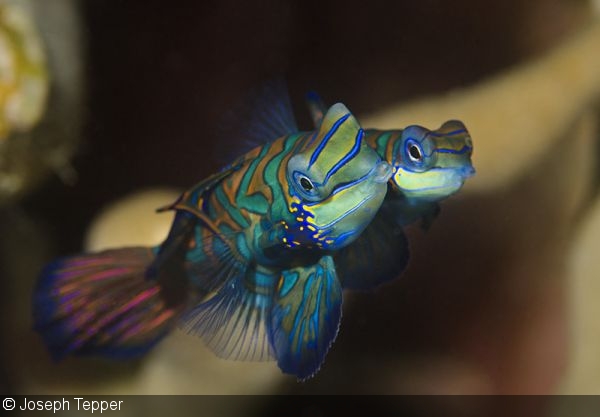 To make your foreground subjects pop, try to keep the background as uncluttered as possible

Pamila Bowman wrote:
it is nice for me

USPool Builder wrote:
Amazing images you shared with us.

Ammy Wilson wrote:
Adorable
You must be logged in to comment.
Support Our Sponsors
Advertise With Us
Newsletter
Travel with us