The Hawaiian Islands are the most isolated group of islands on Earth.

This remoteness produced the highest density of endemic species in the world.  By definition, endemic means to be native to or exclusively found one place.  These unique species makes Hawaii a photographer’s dream, allowing divers to catch “different” creatures than are common in other places. 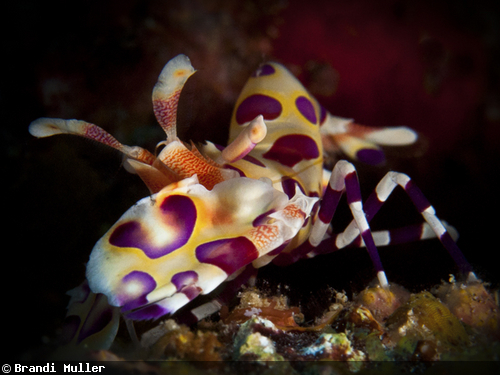 One of Hawaii's endemic gems- a harlequin shrimp gone purple

Hawaii- A Beacon of Life

Being so far away from everywhere else, only the hardiest of creatures made the voyage to the Hawaiian Islands.  Most of the marine fauna was likely brought by currents in their larvae stages, and only those with long larval stages could survive the journey.  For instance, Hawaii has many eel species, and eels that can survive months as larva, on the other hand, anemone fish, which are numerous in the rest of the Pacific never reached Hawaii, likely because of their short (usually one week) larval stage.

Almost all of the life found in Hawaii originated from the Southwest Pacific, moving northeast by hopping from island to island. Once they reached Hawaii they also had to be fit enough to survive the new conditions and have had enough of their species finish the journey in order to reproduce. 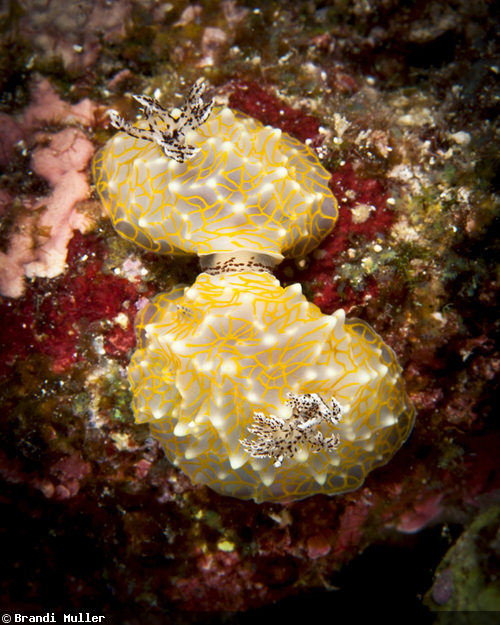 Assuming they made it that far, the new visitor may have slowly changed over time to better suit their new environment.  The isolation of the Hawaiian Islands led to a rare opportunity for many species to evolve into new species.  Some of Hawaii’s creatures closely resemble their South Pacific “cousins,” but have slightly changed their appearance, and likely their behavioral patterns.  And some have no “cousins,” but may be related to now extinct species.

At least 25 percent of Hawaii’s marine life (and much of its terrestrial life) is endemic.  Bandit Angelfish (one of my favorites) are a mostly white oval fish with a black stripe horizontal across its body starting near its eye, looking like it just robbed a bank with a black mask on.  These are usually found in deep waters either alone or in a pair.  Kauai seems to have the highest density of these fish, where they occur in shallower waters. 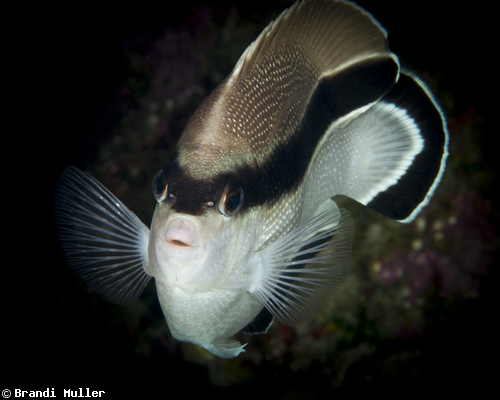 What would a fish look like if it robbed a bank? Just ask the bandit angelfish

Another favorite endemic angelfish is Potter’s Angelfish. Much smaller than the Bandit, Potter’s Angelfish are bright orange and purple, often living in finger corals and tend to be very shy, but numerous throughout the islands.

Several Butterflyfish are also endemic, the most popular being the Milletseed Butterflyfish.  Yellow, with black “milletseed” spots, these inquisitive fish are often in the water column and will come right up to your mask to check you out.  Bluestrip Butterflyfish are found in shallow waters, usually 20 feet or less and their closest “cousin” may be Blackburn’s Butterflyfish from the East Coast of Africa. 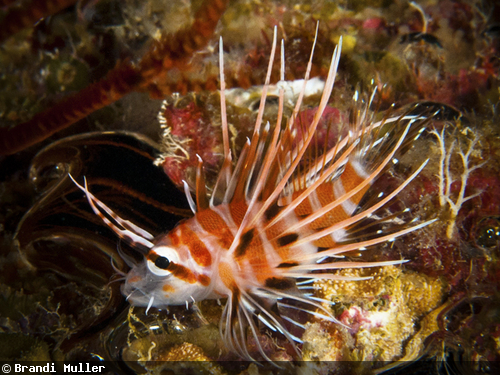 Hawaii has its own species of lionfish that are smaller and a little less elegant than most South Pacific species, often referred to as Turkeyfish in more of an orange-red color.  The Hawaiian dascyllus is a small (usually less than 2 inches) fish that is very common in schools occurring over coral heads.  Juveniles school over small cauliflower corals imitating their “cousin” damselfish whose juveniles usually live with anemones in other areas of the Pacific.

Another neat fish to watch out for is the Psychedelic wrasse.  They have an interesting life history, where the majority are born female and they live in harems with one male and many females.  The females are mostly grey with white specs, but the male has a bright “psychedelic” orange head with a blue tie-dye like splash on it.  When the male dies, the alpha female will change sex, as well as her color pattern to become the bright orange psychedelic male. 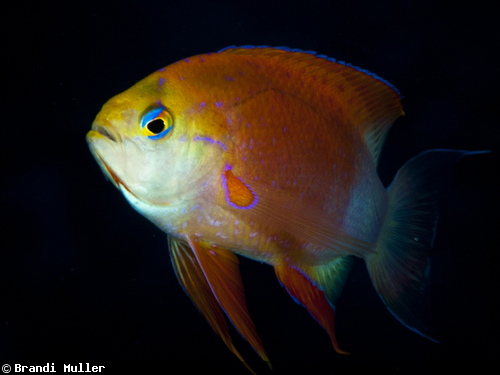 Hawaii has an endemic pipefish, the Redstripe Pipefish, which is usually found in pairs in small holes or crevasses.  The male pipefish, like seahorses, carry the eggs so if you look closely often one of the pipefish in the pair has a small line of light red eggs on its ventral side.

Several times a year, you can find nudibranchs and flatworms that have never been seen before in Hawaii.  Sometimes a wayward fish shows up as well, the Emperor Angelfish, which are found further south and west of Hawaii, are not known to live in Hawaii, but last winter one was seen several times on the North Shore of Oahu. Maybe if a few of them made it, they could become established and reproduce in Hawaii.

There is also an endemic Harlequin shrimp that has the same body shape and size as the South Pacific harlequins, but the Hawaii species is more of a purplish red color, instead of blue. Hawaii has several endemic nudibranchs including the Gold Lace, the Snow Goddess, and the Kahuna nudibranchs along with numerous crabs, shrimps, cowries, cone shells, and other sea creatures. 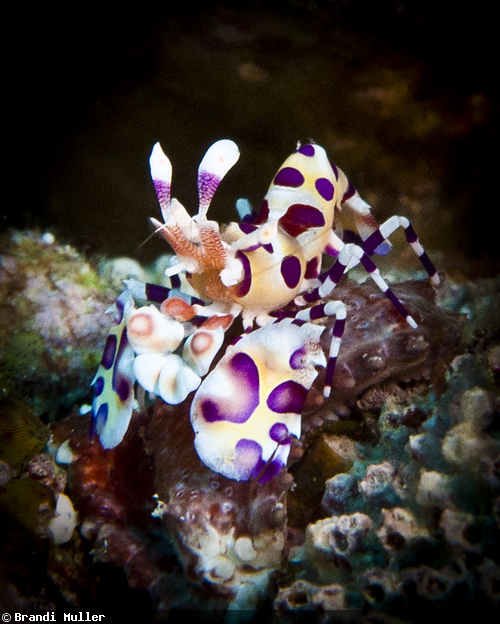 As for the big stuff, Hawaii is home to one of the most endangered mammals in the world, the Hawaiian Monk Seal.  Its closest relatives are the Mediterranean monk seal, with the last small population surviving in the Green Isles, and the extinct Caribbean monk seal.  The Hawaiian monk seals are making a comeback, with the majority of the population (estimated to be around 1700 animals) living in the Northwestern Hawaiian Islands.

The best chance for scuba diving with monk seals is taking a charter boat from Kauai to Ni’ihau, which is usually only accessible due to weather May through September.  Ni’ihau is a private island that you cannot go on land without an invitation, but you can dive around it.  Lucky divers can also see a monk seal on any of the other islands, which occasionally are quite inquisitive of divers, although they most prominent on Kauai, and least prominent on the Big Island.

In addition to Hawaii’s endemic marine life, photographers can find some great non-endemic subjects as well, like the Longnose Butterflyfish.

Although common in the Pacific, in Hawaii there is a black morph Longnose butterflyfish whose entire body has turned ashy black.  Scientists are not quite sure why they sometimes turn black and researchers have taken black fish out of the water and in an aquarium they soon turn back to the normal yellow color. The black morph is most common on the Kona coast of the Big Island, but rarely can be seen on the other islands. 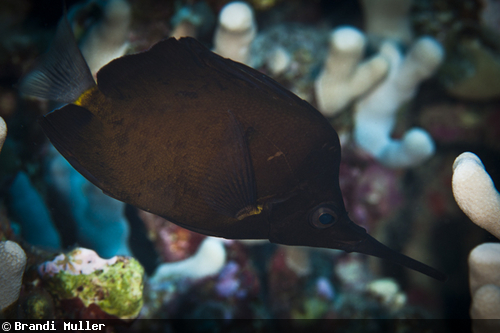 Longnose butterglyfish gone to the dark side

The state fish, Humuhumunukunukuapaa (say that ten times fast), also known as the Picasso Triggerfish, is very photogenic with its large lips and the yellow outline of a triangle on its body.  These are commonly found on all islands in shallow waters, usually 20ft and less.  They tend to be quite skittish, but if you slowly follow their path, they usually return to the same spot over and over again.  Of course, there are some big non-endemics as well.

In the winter months, Humpback whales migrate to Hawaii, with sightings most often from Maui and Kauai.  Another great photo opportunity is off the Kona Coast of the Big Island, where manta rays show up almost every night to feed on plankton brought in by diver’s lights.

Even within Hawaiian waters you can find slightly different underwater environments, with a certain species being rare on one island, and numerous on another.  Diving in Hawaii is a treasure hunt to find what creatures the currents brought in and to see if they will stay.