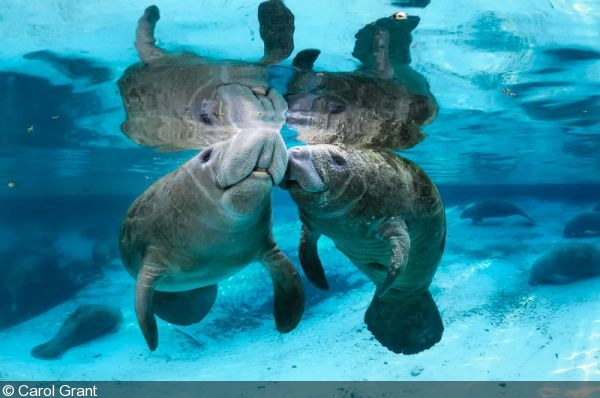 An adult female checks in on a lone calf and coaxes him into some kisses!

For photographer Carol Grant, a life capturing Florida's manatees is a privilege.  Cues that she would develop an affinity for the ocean started as a child when she stumbled upon a drawing of a sea cow in an encyclopedia, and later found herself hooked on the television show Sea Hunt. As an adult, Carol finally made the leap to move from California to Florida in pursuit of firsthand encounters. But little did she know that these sea cows that captivated her in youth would one day become her ultimate subject matter. 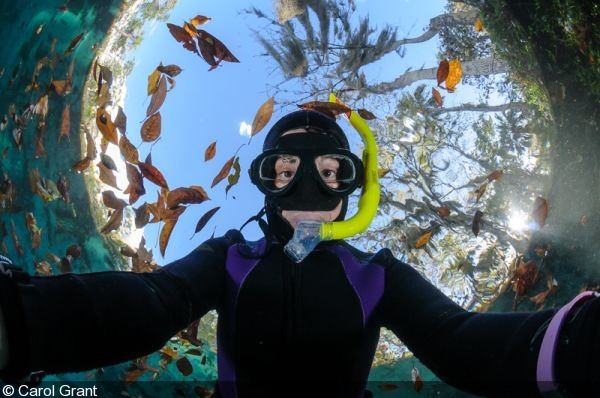 By looking at Carol's work, you might wonder whether she's ever even stepped outside of one of Florida's springs - it's as though she, herself, were born there.  But in fact, Carol has been diving and photographing in many fantastic locations around the world, yet still, nothing seems to top the freshwater homes of the manatee. 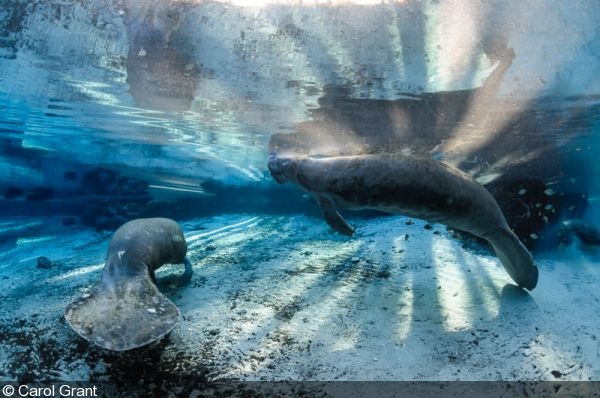 Acting as an advocate on behalf of this shrinking underwater world is both her passion and her mission. Self-taught in underwater photography, she believes the absence of predisposed expectations has opened her up to capturing Florida's manatees without the weight of potentially hindering creative objectives set by others. 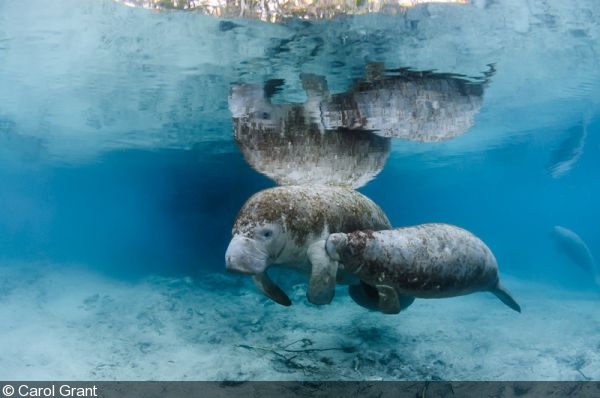 "Yes, I've fallen in love with humpback whales in Tonga, muck critters in Indonesia, seahorses and frogﬁsh in Florida, but my heart belongs to the sirenians. An understanding of wildlife as a Florida Master Naturalist and nearly 2000 scuba dives has helped immensely with my underwater photography and writing about the manatee's world." 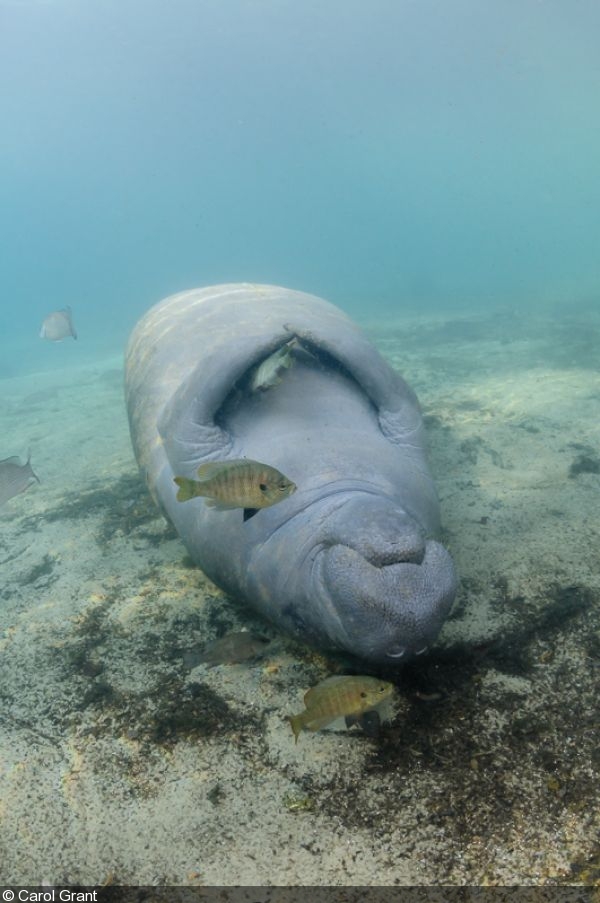 Manatee sleeps with the fishes.

"Composing an image that communicates the true picture requires a lot of planning. Understanding the conditions, and especially the light before jumping in is extremely important in order to best capture the clarity of the springs.  In my work I want to portray the complete picture of manatee life, not just a small snapshot. I invite you to dive with me into their beautiful world." 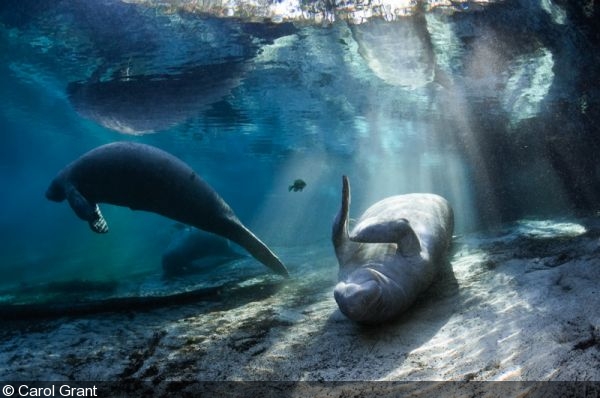 Manatee sunbathing in the warm springs. 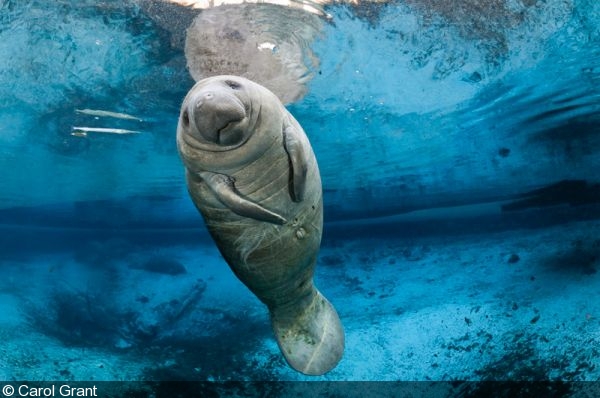 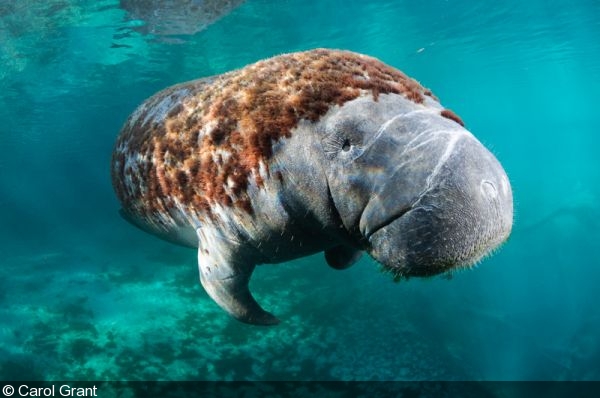 Early in the season many manatees will appear with a layer of fury algae due to their summer adventures. 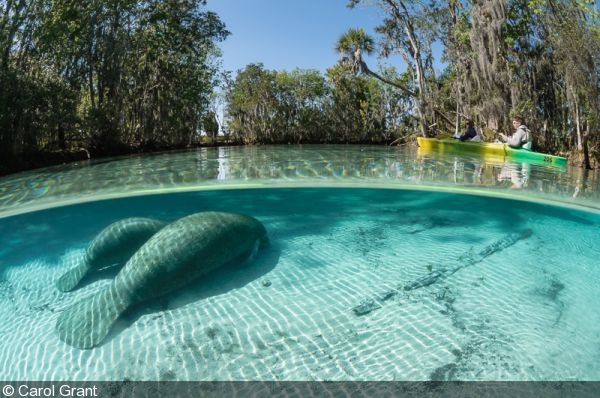 A kayaker passes quietly near a sleeping mother and calf. 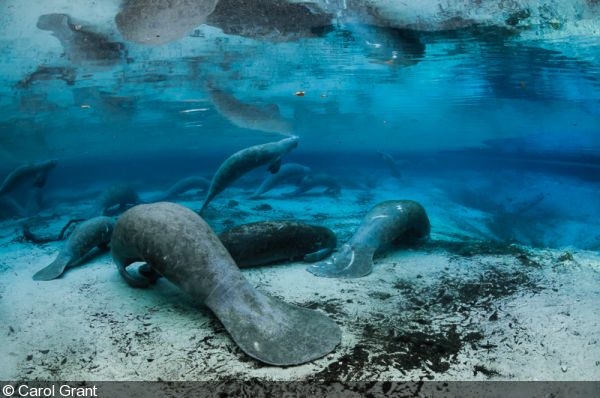 During an unusual cold spell in 2010, many manatees gathered together for additional warmth.

To see more beautiful shots by Carol Grant, check out her website: oceangrant.com