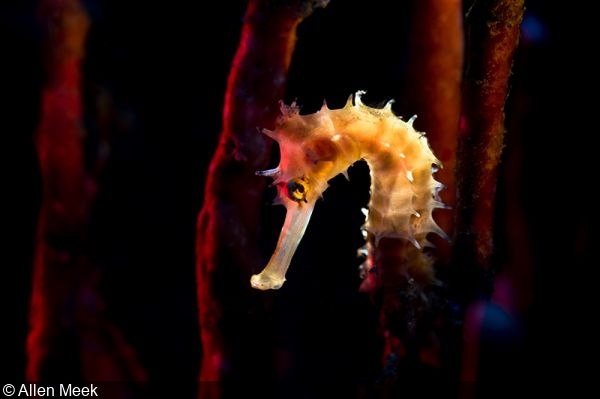 “The music is not in the notes, but in the silence between.” ― Wolfgang Amadeus Mozart

Though shooting macro with black backgrounds has become ubiquitous over the years, there are different and creative ways of using dark negative space beyond basic snooting that can make your image “sing.” While using a snoot can easily achieve an isolated subject, shooting without a fully considered thought to how this dark space can be utilized is only taking away from the potential impact of the image. As in the quote above, I often think of using darkness in photography as the “silence” between the notes. This negative space is no less important than the subject or “notes.” Perhaps it’s even more important.

Think of using dark negative space as part of the whole image, not just as an afterthought. In this way, you start to think of shooting macro images almost as if they are wide-angle images. This, in turn, can open up a new creative process and understanding of how colors, contrast, and composition can be used. Experiment and use the dark background to bring out the beautiful iridescent details that many sea creatures have. 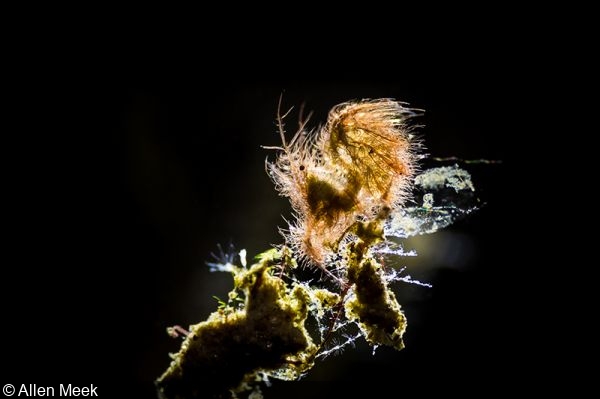 Hairy shrimp are popular photo subjects, so use creative lighting to really make yours stand out 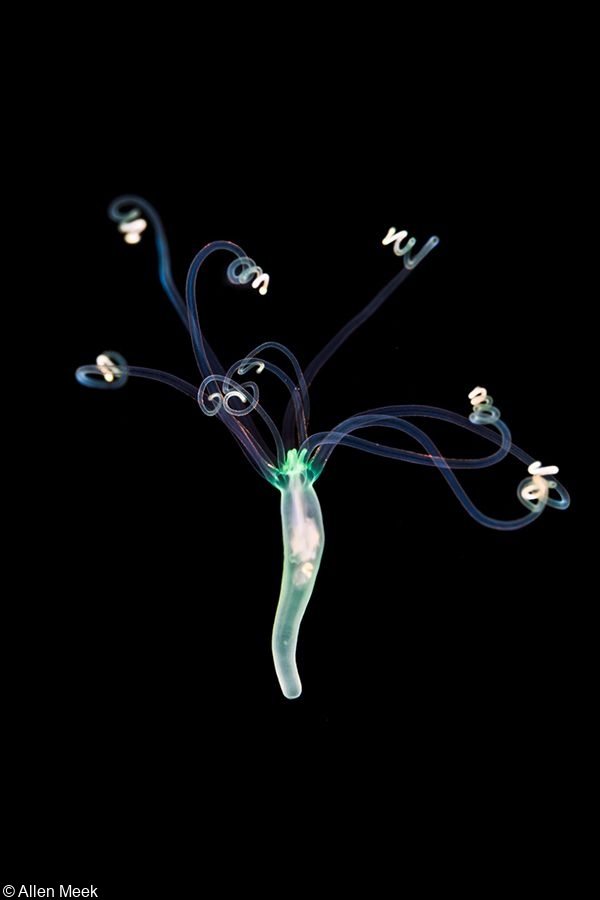 Black-water is the current rage in macro photography, but these tiny critters are incredibly difficult to shoot

You can liken auxiliary lighting (i.e., colored lights, torches, and snooted strobes) to stage lighting for dramatic effect. This is where it can be fun to think uniquely and creatively. In this case, you can think of how to seam the background with the foreground by the use of contoured light, shadow, colors, and spotlight. Colored background fill-in lights are an excellent way to embellish the scene for a more powerful “story” and mood. Using black in conjunction with all the above will give the image more depth and meaning. 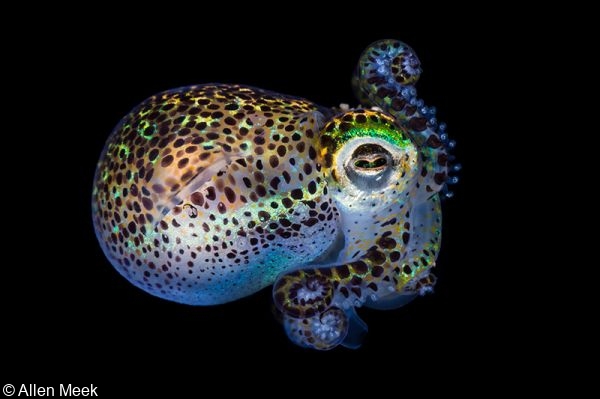 In underwater photography, the use of proper lighting technique is imperative to convey the essence of the image. While it’s important to know how your particular camera works, knowing how to use and position strobes, torch lights and snoots is crucial for a successful photograph. I’ve been fortunate to dive with and learn from various professional photographers and divemasters. What I’ve learned is that there is never only one way. Much has to be derived from creativity and experimentation. This way of learning means that it never ends and that is what keeps you coming back to try new things. Patience is key.

It has taken me years to feel that I know how to use my strobes to get the most out of a scene. One strobe? Two? Where? What power? Once you’ve mastered the basic positioning of your strobes for macro with limited backscatter, don’t be intimidated to try new lighting angles and powers. You might be surprised how versatile strobes can be. Professional photographers definitely know this. 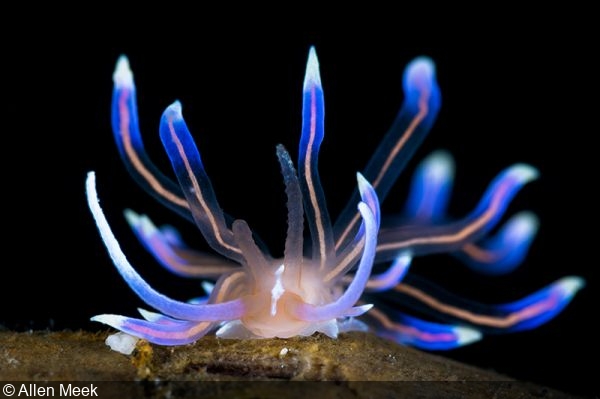 Clean, colorful, and well composed: Keep it simple and shoot what is in front of your port

When using a snoot, don’t fall into the easy habit of just shooting top down. Try to see what is the most striking feature of the subject and perhaps isolate that. Experiment with different sized snoots to bring out these features. In this situation, having a dive guide with a very steady hand is of utmost importance!

As mentioned above, using colored fill-in lights can bring another dimension to your photography. For this, think of what you’d like to highlight and at what intensity. The intensity is usually determined by the distance and angle the torch is placed. Use the natural surroundings to help dictate what would be best. 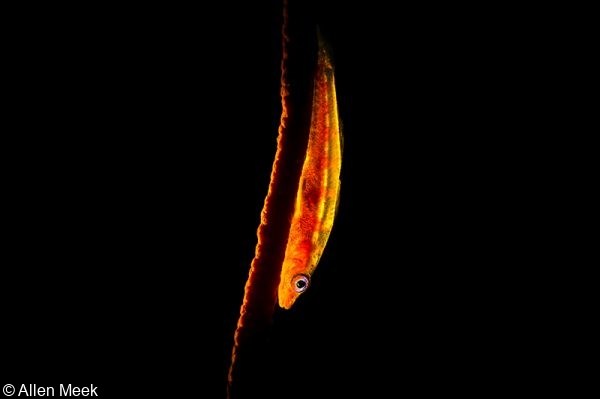 A little orange light creates a wonderful cohensive image. Also note the splash of color and detail on the bottom of the whip which adds depth and context to the photo 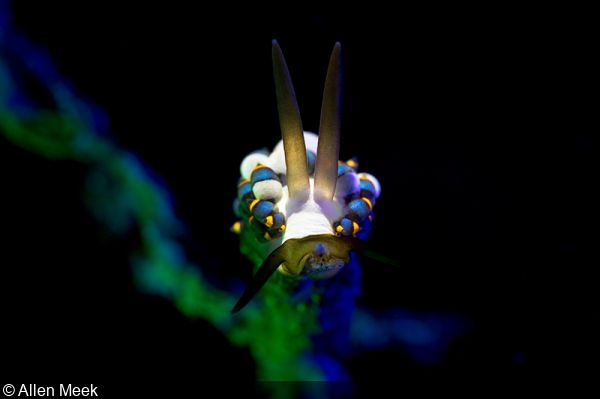 Don’t fall into the trap of a top-down snoot shot. Use a second fill light in the background to create color and highlight interesting features 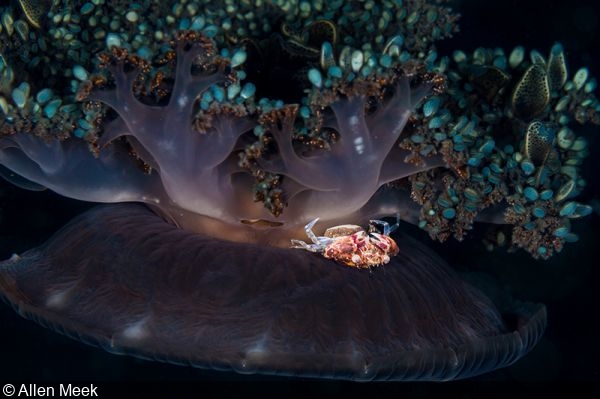 Negative space does not have to be black! Instead of a simple image of a crab on a black background, here we have a memorable scene that tells a story and grabs the eye 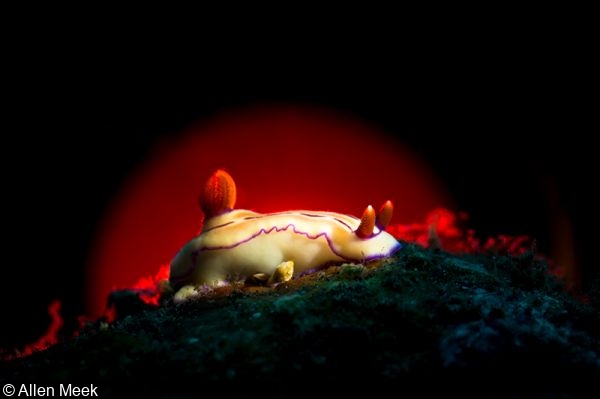 This is another example of using color in your backgrounds and negative space. If this were just a top-down snoot shot, it would be just an okay shot, but with the red light and red transition area, we have a shot that will make you pause and take notice

“If it sounds good, it is good.” — Duke Ellington

The same can apply to being creative in underwater photography: If it looks good, it is good. In my opinion, no art form should be approached with the mindset of pleasing others. Having something to say and pleasing yourself first should be the aim. That being said, one should always continue to refine the basics of lighting and composition. This approach will enable you to be clearer in finding your own “voice.” Learning by doing, with artistic integrity at all times, should be the bedrock of a long life of diving and underwater photography. And, most importantly, don’t be afraid of the dark! 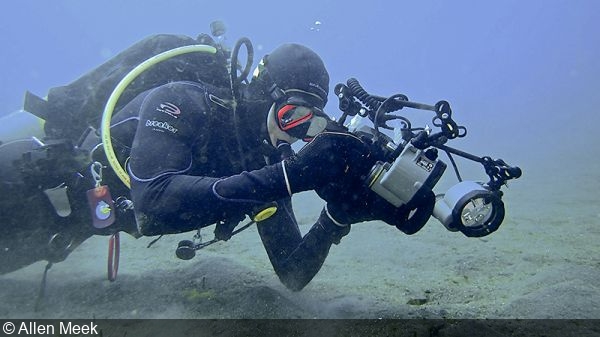 Allen’s pictures all look like they were shot at night, but this image is closer to the truth. The keys to effective shots with black backgrounds are manual camera settings and creative strobe positioning

About the Author: Allen Meek’s curiosity and interest in marine life began as a child when he would watch Jacques Cousteau with his father every Sunday afternoon while living in Southern California. He wouldn’t begin diving, however, until he moved to Singapore, where he is employed as Principal Trombone in the Singapore Symphony Orchestra. Given Singapore’s location, and after being encouraged from other members of the orchestra who specialize in dive photography, it was only a matter of time before he tried it himself. Since then he’s never looked back. Whenever he has time away from musical commitments, Allen continues to explore the diving region in search of new sights and adventures.

USPool Builder wrote:
I am huge fan of your pics you share with us, Really like it.

Anne Curry wrote:
Strange creature under the sea
You must be logged in to comment.
Support Our Sponsors
Advertise With Us
Newsletter
Travel with us