Pro underwater photographers Tanya Houppermans and Jeff Milisen take a detailed look at five of reader Linda McKean’s images, giving her pointers and feedback on how she might improve them. 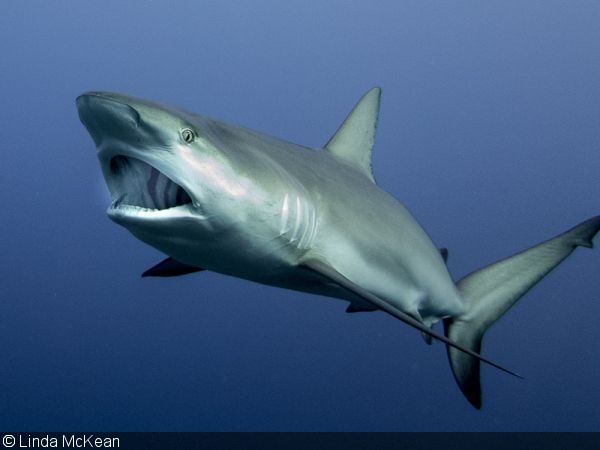 Tanya Houppermans: I really like this action shot of the Caribbean reef shark. The open mouth makes the image much more dynamic than it otherwise would have been if the shark was simply swimming past in its usual closed-mouth posture. Great job on the focus here too, especially the eye! I think you made the right choice in using the fast 1/300s shutter speed to freeze the movement—it makes the image look sharp and crisp. I wish that the entire shark was in the frame, but in this case the little bit of the tail outside the frame doesn’t distract all that much since the viewer’s eye is drawn to the left side of the frame where the action is. I would also suggest decreasing the aqua saturation in post-processing to see if that will show off more of the shark’s natural colors.

Jeff Milisen: Capturing mouth gaping requires a sense of good timing, focus, and being in the right place at the right time. Sweet work! But you aren’t here to show off; you are here to learn how to do it better next time. There are a few things going on with this image that we should address: The animal is a little farther off than is ideal, the caudal fin tip is missing, and the color has an overall grayish hue. You could have gotten closer to reduce the water between you and the shark, and help add some depth. And while we are on getting closer, the angle of the animal is positioned a little too sideways. A more head-on approach would have given the shark a more compelling profile and allowed you to get closer without clipping off its source of propulsion—we all want more sharks with their fins attached! Finally, you managed to hit that midpoint between an undersaturated image and a black and white image. Pick one. 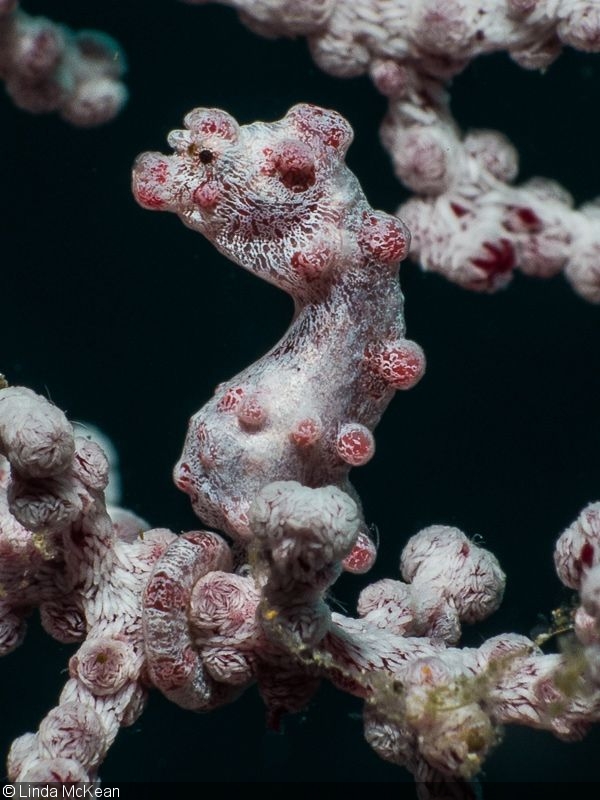 Jeff: Pygmy seahorses are wonderful little finds, and the Barbiganti pygmy is absolutely my favorite. There are few things more gratifying than finding one in a sea fan! Their cryptic nature means you have to prep it for the viewer. At f/7.1, you went with a rather small aperture. I would have wanted to open that up to bring the seahorse into sharp focus while leaving the sea fan in bokeh. Also, how often do you get to play with a red and white subject underwater? Dial that saturation up a few notches and make it pop! And finally, that background is so close to black, it may as well just be black. Your ISO is already as low as it can go, and I just recommended you open your aperture, and your shutter speed could almost catch a hummingbird, so you might have to crank up the blacks while post-processing. 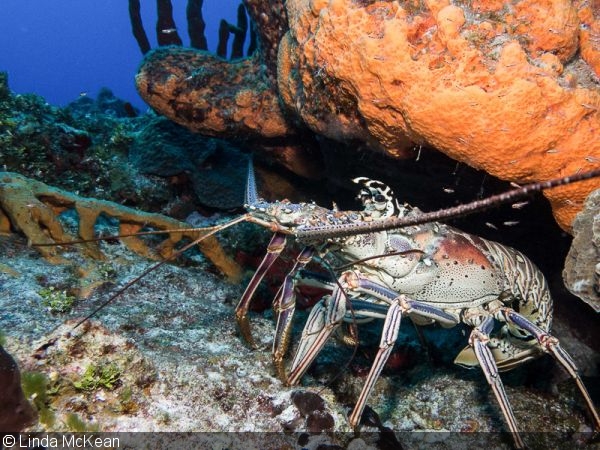 Tanya: The first thing I notice about this image is the bright orange rock and coral formation before my eyes make their way down to the lobster. Ideally, you want the viewer’s attention to go straight to the subject, so in this case I would suggest filling the frame with more of the animal. I’ll admit that I didn’t actually realize just how colorful Caribbean spiny lobsters could be until I took a look at this image, and I think that you could really make an intriguing image by showcasing those brilliant colors. I do like how you off-centered the lobster, thereby creating a more dynamic composition. And I also have to say that you did a great job with the exposure and lighting on this one.

Jeff: Lobsters are gorgeous and they appeal to a wide (and hungry) audience, so we may as well get this right! In this case, it looks like the exposure and artificial lighting are spot on. However, one of the most common pieces of advice that I give people is to get close—then get closer. The wider view means that the bright orange rock is competing for space with the subject. Crop it out. Also, the profile view might work for ID pics, but it doesn’t always work. I would want the animal rotated and facing the camera a little more. And with critters with as many spines and protrusions as crustaceans tend to have, it helps to focus on one part of the animal, like the eyes. 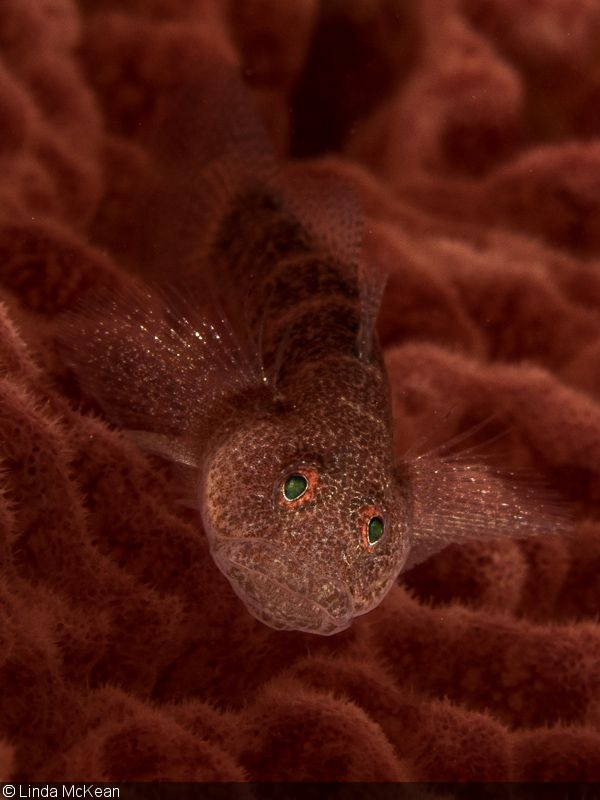 Tanya: This is definitely my favorite image of the group. Look at those gorgeous green eyes on the goby! And in perfect focus too! The depth of field is ideal, and the soft fading of the background bokeh gives the image a three-dimensional feel. The vertical composition works very well here. I like that you’ve placed the face of the goby a little lower than dead-center to accommodate the rest of its body, and you’ve left enough room to the left and right of the fins so that the goby doesn’t feel squeezed into the picture. My only qualm is that the image is a bit underexposed. You could easily slow that shutter speed by several stops, and I think that would let in plenty of light for a proper exposure. Having that extra light would also help to distinguish the goby slightly more from the similar colors of the barrel sponge. But overall this is a lovely image.

Jeff: This is adorable! He looks like my dog waiting for me to throw the ball! I have to agree with Tanya: This is easily my favorite image of the lot. But we are all about improvement here. This image is just a little underexposed—I'd bet you could crank up the brightness in post. Also, try zooming in a little more to bring out those adorable eyes—get closer! 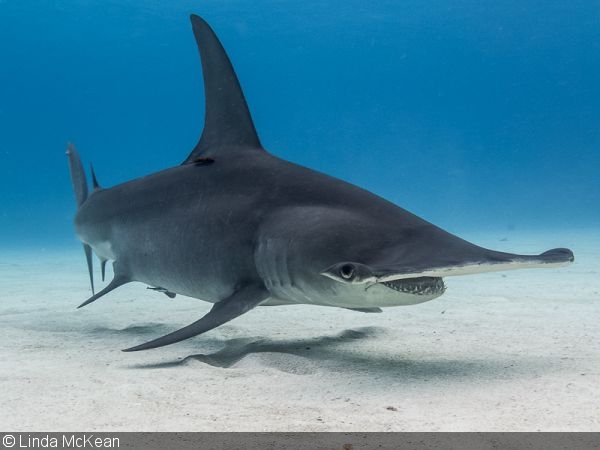 Tanya: As a shark photographer myself, I think that one of the most difficult tasks in underwater photography these days is to come back from the Bahamas with shark images that stand apart from the crowd. While there is nothing inherently wrong with this image, it doesn’t quite have that “wow” factor. As with most of your other images, the lighting and focus look great. But what we’re left with is a common portrait of a great hammerhead on the sand. So this is when you need to get creative. Did you notice any sunrays piercing the water? Increase the shutter speed to “freeze” those rays to make a beautiful background to the hammerhead. Or you could try to go for an unusual angle. Hold your camera down close to the sand, and tilt it upward just a little so that you get slightly below the shark as she swims past. (This is called “shooting from the hip.” You won’t be able to look at your screen while you’re shooting, but since you have a fisheye lens, chances are that you will still get the shark in the frame.) Another option is to convert the image to black and white. Sometimes a photo that is only mediocre in color takes on a whole new life in black and white. Remember that as a photographer/artist, part of the fun (and the challenge) is finding ways to create new and unique images of commonly-seen subjects.

Jeff: Sphyrna mokarran might be the most handsome shark in the ocean. That long, sickle-shaped dorsal fin and wide, sweeping head have an almost regal look. No wonder they called it the “great” hammerhead. As far as imaging goes, it looks like you got the water color/exposure right, and the focus looks tack-sharp, but there is something missing. As with some of the others here, it looks like there is a fair amount of space between you and the shark. If you get close enough, a little strobe might help give the animal some pop. With the number of shark images being produced today, you really have to pull out the stops to create an image that gives a viewer pause.

Tanya: If these photos are any indication, Linda has a very bright future ahead of her in underwater photography. I’m impressed by the variety of subjects she has chosen, and also how she consistently demonstrates good technical skills in focus and lighting. Now it’s a matter of fine-tuning the composition by taking into consideration where the subject is placed in the frame, and what else in the frame might be adding to, or distracting from, the subject. And don’t forget to take the camera settings into account when thinking about composition. For example, use a small aperture and fast shutter speed to darken a not-so-interesting background while illuminating the subject with strobes. Or, open up the aperture to create a shallow depth of field to blur the background in order to make the subject stand out in the foreground. I have no doubt that Linda is capable of creating some truly great images, and I look forward to seeing more of her work in the future.

Jeff: Linda has a fantastic eye that she has used to find some incredible creatures in far corners of the world. She obviously knows how to handle a camera and has done so to produce some successful images here. In general, she would do well to turn her attention to a couple of recurring comments here. The first is she needs to learn to get closer to her subjects. This will go a long way towards helping bring her subjects to life. The second parting advice I have is to get a better handle on post-processing. Whatever program she uses, she should learn it well. Post-processing won’t save a bad photo, but if done well, it can add the cherry to a well-captured image. Good luck in your future travels, Linda—I’ll be keeping an eye on you and your images!

About Linda McKean: Linda stated diving about 13 years ago as a middle-aged adult and was immediately addicted. After she retired in 2013 and was able to start traveling the world to visit different dive locations, she became interested in underwater photography as a way to share the amazing things she was seeing. To learn more about underwater photography and improve her images, she has read books and articles on the Internet, attended some workshops, and listened to the wise words of other underwater photographers.

Valerie Cucherat wrote:
This is so beautiful

Nicola Gilbert wrote:
Oh so amazing really, who don't like sharks.
You must be logged in to comment.
Support Our Sponsors
Advertise With Us
Newsletter
Travel with us