DPG Photo Editor Lia Barrett and professional underwater photographer Tanya Houppermans take a detailed look at five of reader Kristen Yaldor’s images, giving her pointers and feedback on how she might improve them. 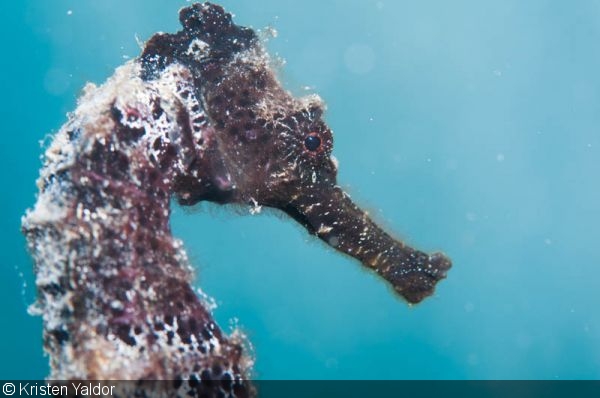 Tanya Houppermans: The first thing I noticed was the perfect focus on the eye of the seahorse. In a close-up portrait, focus around the eye is critical. When you have a simple portrait like this though, there should be something stunning that makes the image pop, whether it’s color, or lighting, or a unique angle (or even all of the above!). I think that’s what’s missing here. While the side profile is lovely, the colors are muted, and the spots in the background are distracting. I would remove the spots in post-processing, and also increase the clarity a bit. I would suggest trying to capture this again with a small aperture and fast shutter speed to create a black background while using your strobe to illuminate the seahorse and bring out its beautiful colors.

Lia Barrett: Seahorses might be one of the most pesky critters to shoot, as they always tend to want to look away from you, making focus and composition extremely challenging. So though it is difficult, I would like to see the seahorse turned more towards the frame, so we don’t get the impression it is turning away from the viewer. I would also, as Tanya suggests, spot-correct in post and boost up your contrast (not too much), so the image is less flat. 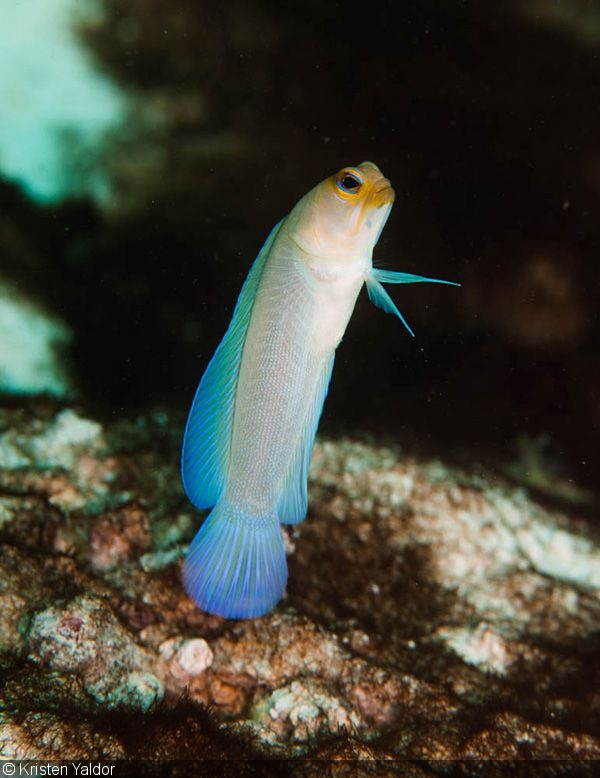 Tanya: Outstanding focus and lighting on this little yellowhead jawfish! And such a great pose too. It looks like he’s conducting a little fishy orchestra off to the side! I typically try to avoid having the subject going straight down the middle of the image, so I would suggest shifting everything to the left just slightly. That would move your subject out of dead center, and it would also help to remove some of the light-colored rock in the background on the left, which is somewhat distracting. I would also darken the background a little more to really make those gorgeous colors on the jawfish stand out. Overall, a really nice image!

Lia: Another incredibly challenging critter to capture—I never even bother—is the goby. Here you’ve managed to capture the fish mid curiosity, lending a feeling of almost “exposing” it while it is most vulnerable. Your lighting and other technical aspects are well executed. Other than what Tanya already mentioned, I guess all I could ask for would be two gobies in the frame! 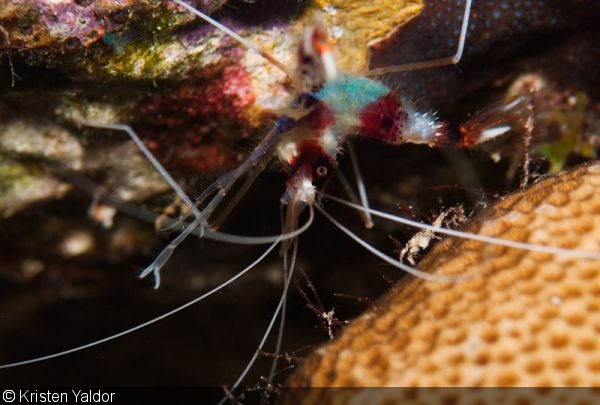 Tanya: There is a lot going on in this image, and while part of me is thinking, “Look at all the pretty colors!” the other part of me doesn’t quite know where my eyes should focus, especially with the cleaner shrimp being upside down. The shrimp is already very colorful, and it would stand out much better if it were on an piece of rock or coral that is more uniform in color and texture—if only it were that easy! I commend you for trying to get a shot of this little cleaner shrimp in what amounts to a very difficult position to shoot it from as it hangs in the gap between the rocks and coral. I really respect the fact that you tried to work with what was in front of you, and avoided moving the shrimp to a location that would look better in a photograph.

Lia: With so many tentacles and arms, these shrimp can be perceived as a cluster of lines and stripes. When you throw in a busy background, things can get visually consuming. I would start by trying to capture this shrimp when it is in a less precarious position—perhaps against a more solid colored coral or rock. I would also avoid shooting it upside down as it is already a bit of a jigsaw puzzle of an animal. And then perhaps think about focusing in on particular features of the shrimp. Maybe get a head-on view where you frame the face and claws. These suggestions are perhaps easier said than done, but I’d go ahead and straighten out the confusion or consider moving on to a more streamlined subject. 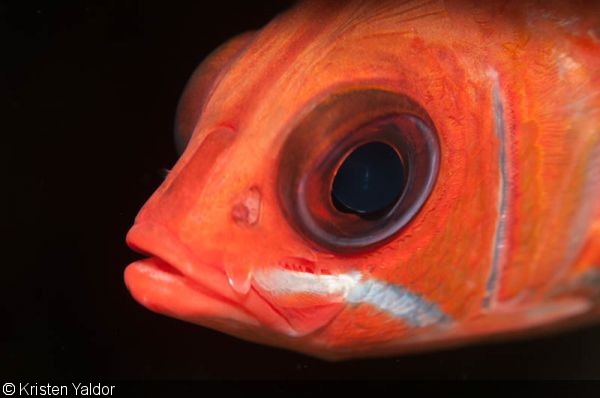 Tanya: Now this is what I’m talking about! A simple portrait of a squirrelfish that jumps right out at the viewer! The black background contrasts beautifully with the vivid orange skin. The lighting is superb, with even exposure and highlights. And there’s that perfect focus on the eye again. I really like the angle of the fish, which gives it an almost three-dimensional quality, making it appear as if it’s swimming straight out of the image. I also like the slight blurriness around the edges; it has the effect of the fish softly fading into the background as opposed to a harsh line. I have an image of a squirrelfish that is very similar, but I have to say that I like yours better!

Lia: Where I don’t often like images where half of the animal is cut out of the frame, I believe in this instance, it works! Your colors are beautiful and the blacks of the eye complement the negative space very nicely. I might just be seeing things, but I’m wondering if the eye is slightly out of focus. If it is in focus, it’s being hidden by the shadows. Keeping a sharp focus on the eyes of macro critters is perhaps the number one rule to shooting small stuff, so just keep this in mind as you journey on in your photographic pursuits. 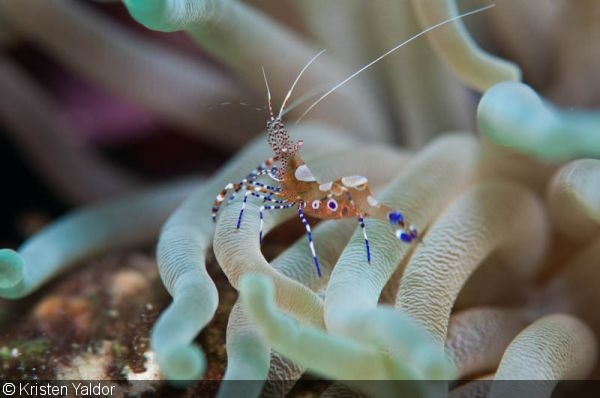 Tanya: The anemone frames the spotted cleaner shrimp really well in this image. And I love how the leading lines of the anemone draw the viewer’s eyes straight to the shrimp. The colors of the shrimp and the anemone contrast well, so that the shrimp stands out from the surroundings. I only have a few minor suggestions. First, offset the shrimp so that it’s not right in the middle of the image. I would shift it slightly to the right and leave some room on the left. This way, the composition is more dynamic, as the viewer senses the motion of the shrimp walking to the left. Second, increase the highlights slightly to brighten up the image and also increase the contrast just a little to deepen the colors. Lastly, you could easily crop the image a little more to zoom in on the shrimp, and still keep the nice framing of the anemone.

Lia: I have a certain affinity for the “sexy shrimp” (so aptly named for its ability to stick its hiney up in the air), for they are beautiful and adorable. In capturing this particular shrimp, you have implemented a nice use of bokeh, revealing its habitat without being too distracting. I would, however, like to see more “pop” to this image. You can do this in post by opening up the exposure a bit in the curves, and adjusting the highlights and lowlights to give a broader spectrum. In doing this, you will also bring out the blues and the whites in the shrimp’s body, making it really stand out. Finally, I would experiment with the composition a bit more. Perhaps look for different angles from which to shoot the shrimp. Maybe try to capture it head on with its tail sticking up. Or even better, get two shrimp in the frame at once!

Tanya: One of the most difficult aspects of macro photography is mastering focus, and Kristen is doing very well in this area. I especially like the sharpness of the eyes in her macro portraits. I am also impressed with the variety of images she submitted, and her willingness to challenge herself with subjects that can be quite difficult to photograph successfully. Concentrating on dynamic compositions—remember to try moving the subject out of dead-center if possible—combined with some fine-tuning in post-processing will go a long way in taking Kristen’s images from good to great.

Lia: Self-editing is probably one of the most difficult parts of being a photographer. For example, in this series, if you take out Kristen’s two weakest images—the seahorse and the banded shrimp—her work as a body has a completely different feel. So learning to detach oneself from subjects you love vs. keeping images that work both technically and substantively is a great exercise in developing and improving. But I think that Kristen’s work, if she continues down the path of her stronger images, is going to develop quite nicely. Paying attention to post-production and experimenting with composition will be important, but I think she definitely has a lot of potential!

About Kristen Yaldor: An IT project manager by day, Kristen is an underwater photographer enthusiast any chance she can get. She has been attracted to the water and marine life since she was a kid, and as she got older and began snorkeling, her goal was to stay underwater for longer so she could take better photos. Certified in 2009, she has had an underwater camera in her hand ever since. She has dived almost all of the Caribbean islands and has recently started shooting in Pacific waters. Macro photography has become her passion—looking for the little things that most people overlook as they swim by.