Pro underwater photographers Tanya Houppermans and Jeff Milisen take a detailed look at five of reader Jon Anderson’s images, giving him pointers and feedback on how he might improve them. 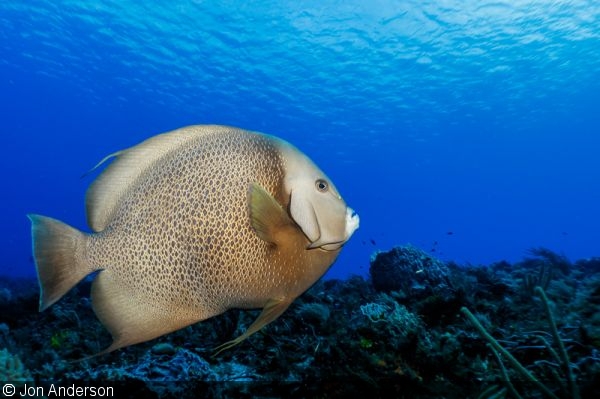 Tanya Houppermans: You really nailed the lighting on the gray angelfish. The body of the fish is evenly lit, and the highlights aren’t too soft or harsh. I also like the sharp focus, and the fact that you’re tilting the camera slightly upward to get the surface ripples in the water. But there really isn’t any intriguing composition here. If the coral has some nice colors and textures to it, you could drop down a bit and try to capture the fish as it swims directly in front of the coral, using the coral as a backdrop (a second strobe would definitely help here). Were there other gray angelfish around? If so, capturing a few of them in the frame would add some interest, too. When you think about subject and composition, ask yourself, “Why would someone want to look at this image? What about it will capture the viewer’s attention?”

Jeff Milisen: I just love that deep blue color of the water and how it contrasts with the angelfish, all while preserving the textures and details in the animal. I only wish the fish were facing the camera just a little more while still maintaining the details and broadness of its profile. When working with animals, timing is everything and the head of the fish is in the act of turning away and reacting to the photographer in an evasive maneuver. If you could go back and remake this, I would have tried to click the shutter just a microsecond earlier. But let's step back a moment and look at the colors, or lack of, in the main subject. The textures are beautiful, but the gray fish against a blue background makes for a rather lackluster composition. 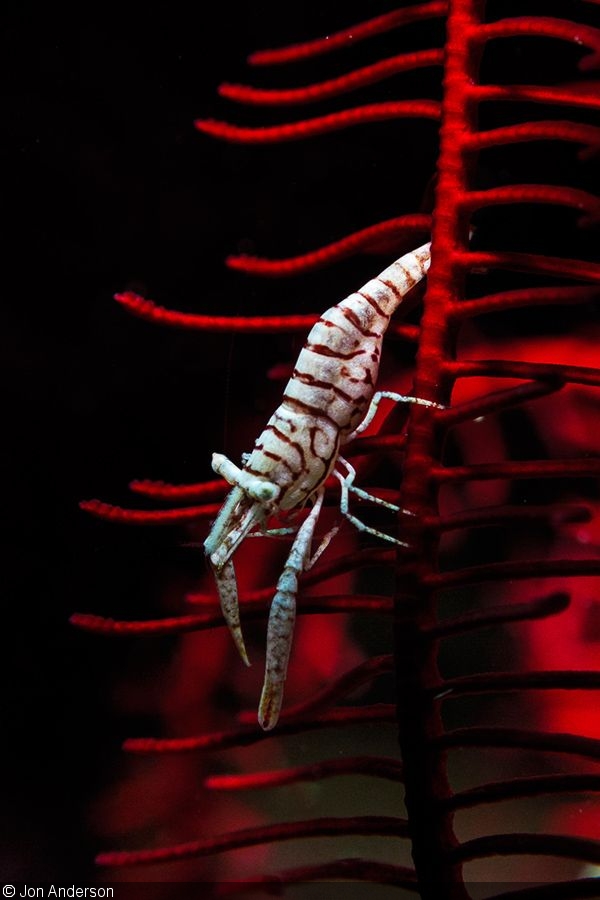 Tanya: There is so much to love about this image. First of all, the shrimp is sharp, making it stand out in the foreground, while the crinoid softly blurs to a beautiful background bokeh that adds depth to the image without being distracting. The colors are brilliant, and the contrast between the black background, red crinoid, and white shrimp is striking. You could easily crop out much of the top and right corner of the image to take the shrimp out of the center. Since the shrimp is pointed toward the lower-left corner of the frame, leaving a bit more negative space there creates a more dynamic composition by adding a sense of motion from the shrimp. My only other suggestion would be to slightly increase the brightness of the head and front legs of the shrimp in post-processing to make it even with the rest of the body.

Jeff: When I first saw this shrimp on the crinoid, I panicked: I shoot a lot of macro photos and should be able to come up with something to pick on! The color balance is splendid, the contrast is good, the subject isn’t hiding and is well placed in the photo, and that background—swoon! This really is a beautiful subject depicted beautifully! On closer inspection, though, the lighting should be moved to draw more emphasis to the face. Perhaps rotate your strobe to the side or below to illuminate and bring out the details in the claws and face. Furthermore, I know these things are small, but I would have wanted to go in even tighter for a little more detail on the subject. Focus on the eyes, slap on a +10 diopter, extension tube, or whatever other super macro gear you have in your arsenal, and go in to nab the details of the face or the shrimp’s body. 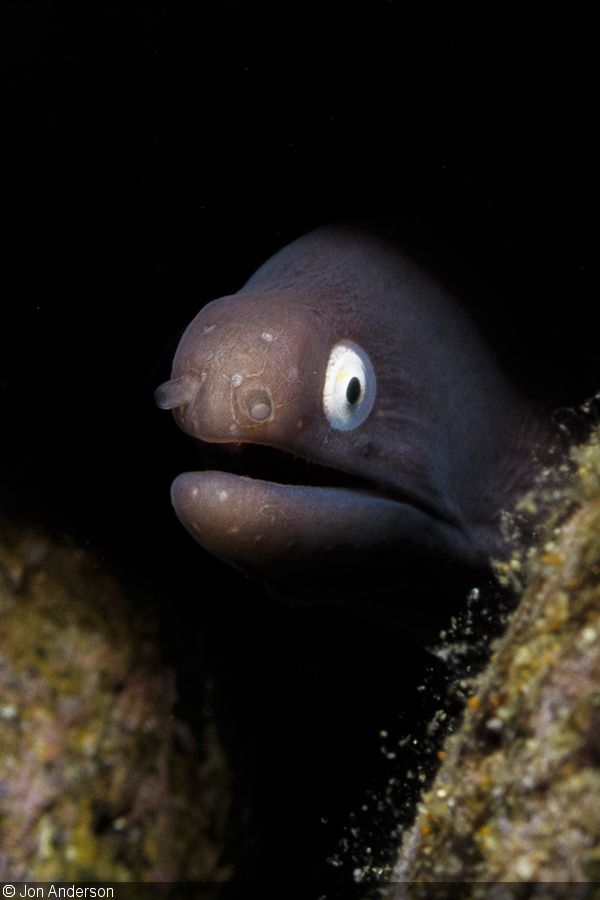 Tanya: Nice focus here again, but we’re dealing with another image that doesn’t quite have that “wow” factor. A white-eyed moray with a black background seems to be a favorite subject with underwater photographers lately, so when you’re capturing a popular subject like this, there has to be something about your image that separates it from the rest. My first suggestion is to take the eel out of the dead center of the frame. Off-centering the subject often creates a more dynamic composition. And speaking of composition, in this image the rocks on the sides of the frame are similar in size to the eel, and are competing with the eel instead of complementing it. I would like to see less rock and more eel. In this case, since there’s not a lot to work with to create an interesting background, I think I would go for a super close-up of the eel’s face if possible. Doing that would also remove some of the negative space at the top of the image that leaves it feeling a little unbalanced.

Jeff: Ahh, the old moray-poking-out-of-a-hole shot! Like the other images, the focus is perfect and technically the shot is well orchestrated. Morays are great for practice because they just sit there looking into the camera and let you shoot. However, I have seen some variation of this photo hundreds of times over. One should strive to make it stand out from the others, either by taking a unique approach—get closer!—or finding one that is out of its hole a little more. Often, morays pick holes in the reef that house commensal cleaner shrimp, an interaction that can be photographed in any number of ways. Finally, a lot of the black could be cropped out of the top of the photo, and even the bottom quarter, to draw a little more emphasis to the subject. 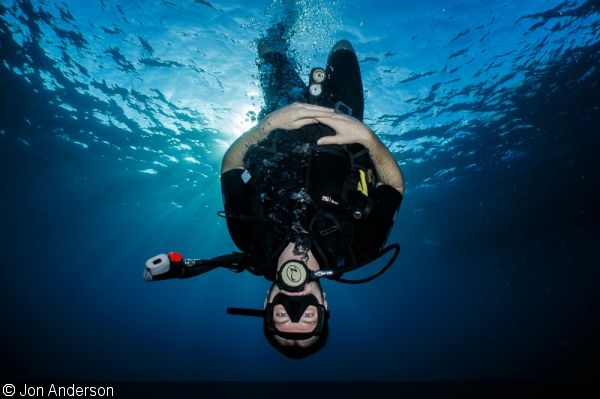 Tanya: I like the relaxing feeling to this shot. The diver is “smiling” with his eyes—even though his face is mostly covered, we can still feel the joy he has in being underwater. As photographers, we hope to elicit an emotional response from the viewer, and this image succeeds. A few points though: First, I really want to see that inflator hose secured to the diver, not only because it’s distracting here, but also to set a good example to other divers to keep their gear as streamlined as possible. Second, I think there’s a little too much negative space on each side of the diver, especially since he’s placed in the center of the image. My suggestion is to make this a vertical image by cropping the left and right sides, placing the emphasis on the diver and his expression. And I would also just slightly decrease the shadows in post-processing so that the image isn’t quite so dark overall.

Jeff: This shot encapsulates the joy of diving comfortably underwater. The subject is well placed, the eyes are exposed clearly, and the background is balanced well with the artificially lit subject. I have three points that would help here. The eyesore of the image is the errant inflator hose hanging off (and the mask strap), and to add insult to injury, that red inflator button just makes it stand out more—get it under control! Second, the subject is vertically oriented, so this could have been taken as a portrait to crop out some of that extraneous blue at the sides. Finally, I might have played around with the white balance just a touch to give the diver some semblance of a tan. Hands in particular tend to look washed out, and anything that is white will distract the viewer and draw the eyes away from the subject matter. 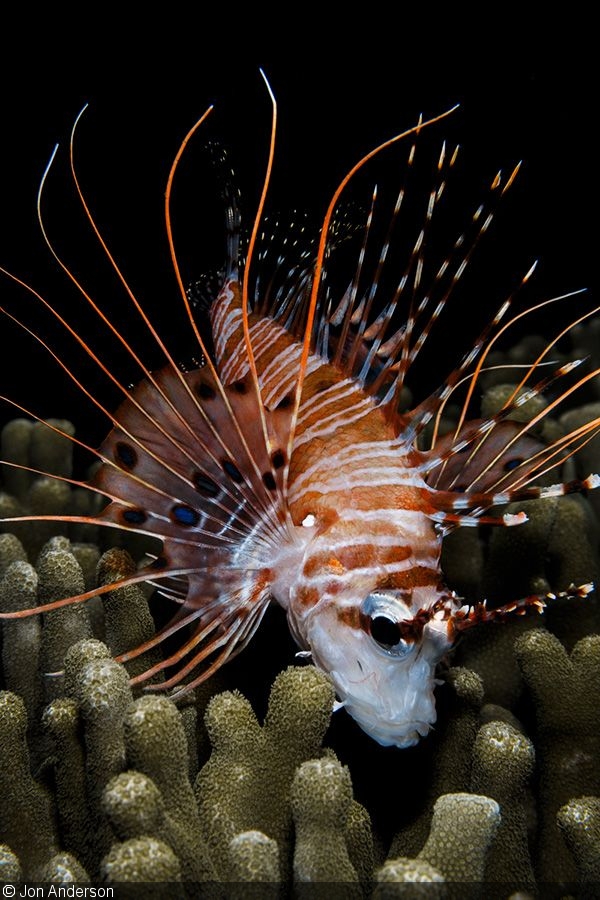 Tanya: I really do like this shot. It’s almost as if you’ve already taken my prior suggestions and incorporated them into this image! I see so many shots of lionfish either taken from the side or head-on, but here you’ve captured a rather unique angle. The rule-of-thirds composition is spot-on here with the lionfish’s eye placed in the lower right corner as opposed to the center of the frame. The coral nicely complements the lionfish, and does not compete with the lionfish for the viewer’s attention. The lighting is impeccable, although I’m going to be picky here and say that you could slightly brighten up the eye in post-processing to make it pop even more (just be careful to keep it natural looking). The entire image is crisp and sharp, and I like the beautiful contrast between the black background and the bright orange of the fins and spines. You’ve also left just the right amount of space on the top of the image, so that the lionfish feels properly balanced in the frame.

Jeff: I like a lot about this image! The focus seems to capture the whole subject, the details at the base of the pectoral fin are wonderful, and I just love how the fin filaments flow upwards and in all directions. Jon really captured the essence of this lionfish. To my eyes, however, it is just a little underexposed with too much black over some drab, dark-colored coral. Also, the positioning of the animal makes it seem like it is taking a nose-dive into the reef. I might have waited just a bit for the animal to pick its head up just above the tips of the coral to get the full shape of the jawline.

Tanya: Jon is already showing his talents for focus and lighting, which are critical to any image. You can have a fascinating composition, but if the photo is dark or blurry or overexposed, brilliant composition is meaningless. I also like that Jon is comfortable shooting both macro and wide angle, and he is showing great promise in both disciplines. With those fundamentals down, Jon should now start concentrating on creating intriguing images that capture the attention of the viewer. By asking himself questions such as, “What haven’t I seen before?” he can begin to develop the mindset to make his images stand out from the rest. It could be as simple as a different angle, such as the lionfish image, or something more complicated: Was that lionfish swimming anywhere near the eel? Could you have possibly gotten a shot of them in the same frame? By continuing to challenge himself, I think that Jon really has the potential to be an outstanding underwater photographer.

Jeff: Jon seems to have the technical aspects of exposure and focus under strict control. He even has a great start in the rules of composition. The next steps should focus on reading situations as they occur to compose stronger imagery. In a couple of his shots, time might have been better spent looking for a similar composition in a more compelling subject. Once you find a subject, assume that others have shot it before and start looking for that unique take. Either way, Jon has some great images already and with just a little more thought put into the composition, he is well on the path toward making amazing images.

About Jon Anderson: Jon first learned to dive in Cozumel, Mexico at the age of 12. Over 160 dives and 14 years later, he still carries his original Junior Open Water certification card to produce a good laugh with dive operators around the world. Two years ago, he moved to California and started diving regularly (locally and abroad) when he is not busy designing robots at his day job. In the last year, he has become addicted to underwater photography. jonjake.smugmug.com