DPG Photo Editor Lia Barrett and pro underwater photographer Tanya Houppermans take a detailed look at five of reader Jean-Marie Belloteau’s images, giving him pointers and feedback on how he might improve them. 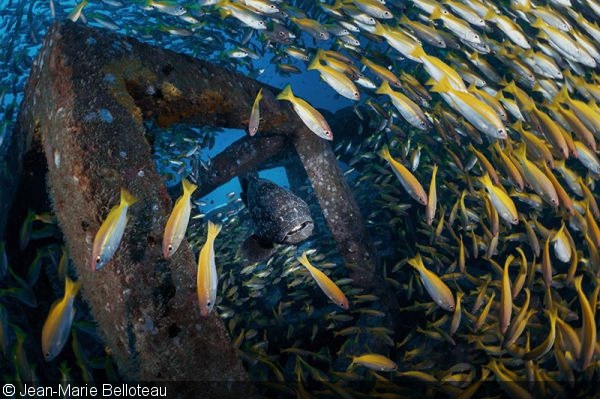 Tanya Houppermans: The fast shutter speed worked perfectly to freeze the motion of all the action in this image. But with so many moving parts, I’m not quite sure what the subject is. My eyes are first drawn to the vivid, bright yellows of the fusiliers in the upper right corner, where you did a superb job in properly exposing them without blowing out any highlights. I then noticed the grouper, which almost gets lost in the image since there’s nothing to make it pop against the background of the metal structure. The lighting also fades as the viewer’s eyes travel to the lower left corner, creating an imbalance with the upper right corner. In a situation such as this, pick your subject and then try to put it in the best light possible (pun intended!). I would suggest moving closer to and slightly below the grouper, and then capture it as it swims out of the structure, where the square opening would nicely frame it, clearly defining your subject. The fusiliers already behind the grouper would make an interesting backdrop, and also add depth to the image.

Lia Barrett: I love it when wrecks have matured a bit and life has really had a chance to make them a refuge. Sometimes, when so many inhabitants have gotten wind of these awesome havens, they can have so many fish that it’s disorienting. In this instance, I like how you’ve chosen a few focal points for which the viewer can anchor visually. The fusiliers nicely complement the wreck structure, allowing for a natural framing of the grouper. My biggest suggestion would be to wait for the grouper, which is the main character of this scenario, to emerge more from the wreck. You’re casting a shadow on its body with your lighting, and its actual size is dwarfed by all the commotion. So next time, consider moving in, so that the picture, amidst all of the chaos, seems less busy. 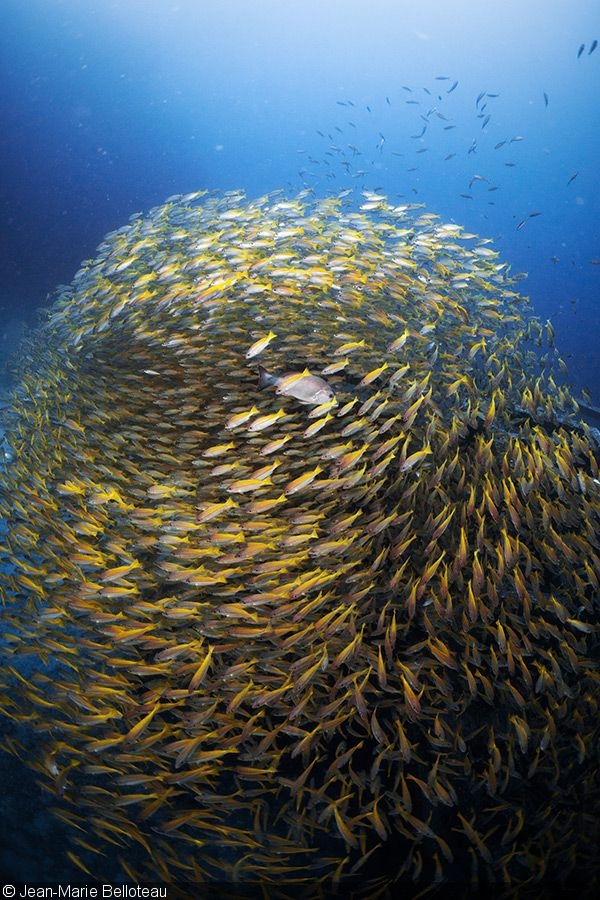 Tanya: I never cease to be amazed at the intricate formations that a baitball can make, and this one lends itself very well to the vertical format that you chose to capture it in. Again, the fast shutter speed freezes the motion of the individual fish, and the yellow color of the fusiliers contrasts nicely with the blue background. The lighting is a bit uneven, which could be remedied by extending the strobes a little more, and upping the strobe power if needed. You could even increase the brightness of the right-hand side in post-processing to even it out. The spots in the blue background are distracting, and are also easily removed in post-processing. For a more dynamic composition, I would suggest that instead of shooting the baitball straight on, drop down and photograph it from a slightly upward angle. This simple trick tends to create a more three-dimensional feel to an image, which helps to immerse the viewer in the action.

Lia: Schooling fish are perhaps one of the most gripping subjects to capture. Standing alone, a school of fish can be boring, which is why it is important to add another element to the scene. Be it a model, a wreck, a sunball, or a predator, having that additional piece of the puzzle creates tension—it makes a story come to life. Here you have what appears to be a snapper to give scale to the school, which is good. I would think about moving in on the school just slightly, as fusiliers tend to move in a motion surrounding a predator, and so perhaps they would have created an opening to the snapper, so that it is better revealed. I would also watch your lighting, as you have dark space in the lower right corner, which leaves an unbalanced feeling to the image. 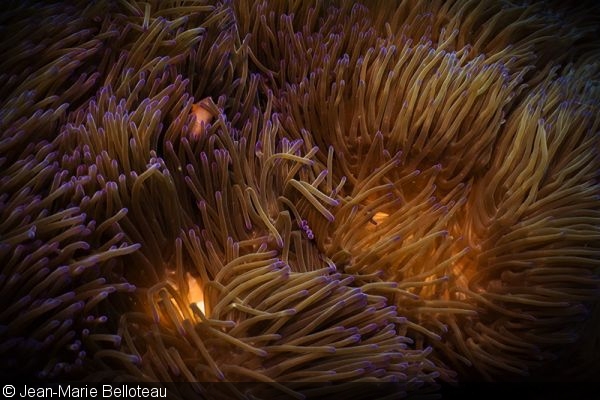 Tanya: The color contrast between the purples and oranges is beautiful here, and the soft focus on the anemones works really well. I can easily visualize the fronds of the anemones gently swaying with the current. For me, the image is a bit too underexposed, and the vignetting is a little harsh. I would love to see all three clownfish poking their little faces out of the fronds, because it’s difficult to tell exactly what those glowing orange patches are. (I know, I know, it’s hard enough getting one fish to do what we want, let alone three!) As divers and underwater photographers, we can probably discern that those are clownfish, but think in terms of what the general public would see looking at this image. I commend you for going for the difficult shot of all three, but if they’re not cooperating, it might be best to focus on one and try to get a good portrait shot of it peeking out from its home.

Lia: Though anemones are beautiful, I want to see more of its inhabitants. Otherwise, what we have here is the cake without the icing… 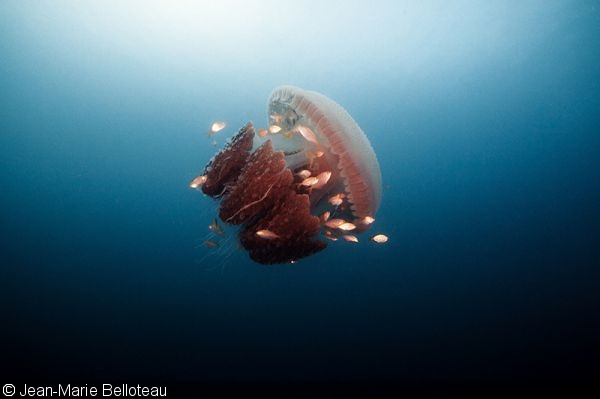 Tanya: A running theme in these images is the outstanding use of color, and this is no exception. The shades of mauve and orange in the jelly and the surrounding fish are stunning. As a general rule, try to avoid placing the subject in the dead center of the image, as offsetting the subject tends to create a more dynamic and interesting composition. I do like how you’re shooting at an upward angle. In this instance, I would crop the image so that the jelly is placed toward the lower right-hand part of the frame. Then, to really give your image the “wow” factor, try capturing the sunball in the upper left portion of the frame with the sunbeams piercing through the water. To do this, keep the shutter speed high, close down the aperture to f/16–f/22, keep the ISO as low as possible, and use your strobes to illuminate the jelly—you may have to bump up the strobe power a bit, too.

Lia: I’ve seen many of these jellyfish in the Gulf of Thailand, and they can be quite enjoyable shooting subjects. You’ve done a nice job of not blowing out the shiny fish with your strobes, and I like the balance you have going on between your ambient and artificial light. I would suggest getting much closer if you’re going to shoot out in the blue and/or adding another element to the frame. You can implement Snell’s window, add a sunball or a model, or simply move in—any of those options would work. I would also use those elements to balance the jellyfish so that it is not directly in the center of the picture. 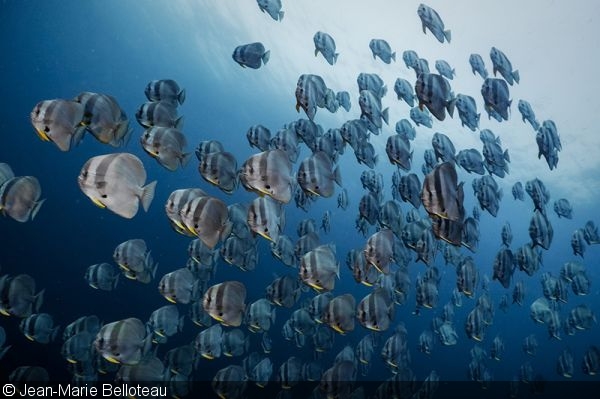 Tanya: I really love the composition on this one! The upward angle that you’re shooting from creates that three-dimensional quality that I mentioned earlier, and the soft sunlight through the surface of the water makes a lovely backdrop. You’ve also gotten up close, which makes the viewer feels like they are immersed in the action instead being a passive observer. I would like to see the batfish in the foreground evenly lit, so extend those strobes more and crank the power up another two or three stops, being careful not to blow out the highlights on these very reflective fish. With that tweak on the lighting, and the removal of some of those little spots in the background in post-processing, I think this is one of those images that would look great as a large fine art print proudly hanging on someone’s wall!

Lia: I am pretty familiar with these schools of batfish as well, and know how challenging it can be to shoot and swim with them without having them scatter. (They seem slow but are surprisingly swift when you are trying to keep up with them.) My biggest concern here is the exposure and the strobe lighting. I would have opened up the exposure a bit, and balanced your strobes a bit more, so that it is not so obvious that only the first few fish caught your light. I would also again consider adding in another element to give the school some scale. Step back, grab your buddy and motion to them to join in, and really get that grand feeling you can achieve from photographing large groups of fish.

Tanya: Jean-Marie’s talent as a colorist is readily apparent throughout all of his images. Creating vibrant colors in underwater wide-angle photography is inherently difficult since our underwater world is awash in blue. We have to depend on our strobes, and also color-correction in post-processing, to bring out the true colors hiding behind all of the blue. Jean-Marie has shown himself capable of using his strobes to highlight color, but now it’s time to work on the placement and power setting of the strobes to perfect the lighting. Pay particular attention to evenly lighting your subject, and also think about the angles you’re shooting from to create dynamic, interesting compositions. With just a little improvement in these areas, I think that Jean-Marie could easily make the leap from taking good underwater images to creating memorable works of art!

Lia: Jean-Marie has captured a lot of the essence of the Gulf of Thailand in these images. I love that he is drawn towards the large schools of fish, and I believe that with a few additional alterations to lighting and approach, he will be making some show-stoppers in the near future. I would, though, continue to work on strobe placement, light balance and composition, which are some of the areas I think he can improve upon. But I can see his mind working in several of these images, and if he continues to pursue some of these thoughts, he’s going to be making some pretty sweet pictures. It would be really interesting to see that progress implemented in a different location.

About Jean-Marie Belloteau: Jean-Marie currently works as a cinematographer and digital colorist. He has always had a keen interest in marine life, but only started shooting underwater while doing his Divemaster in January 2016. Jean-Marie is passionate about capturing the magic of the underwater world, but he is also concerned about conservation, and ultimately wants to use his images to contribute to raising awareness about the fragile creatures that share the ocean with us.

Laurent Dufour wrote:
Amazing pictures!
You must be logged in to comment.
Support Our Sponsors
Advertise With Us
Newsletter
Travel with us