Pro underwater photographers Tanya Houppermans and Jeff Milisen take a detailed look at five of reader David Haintz’s images, giving him pointers and feedback on how he might improve them. 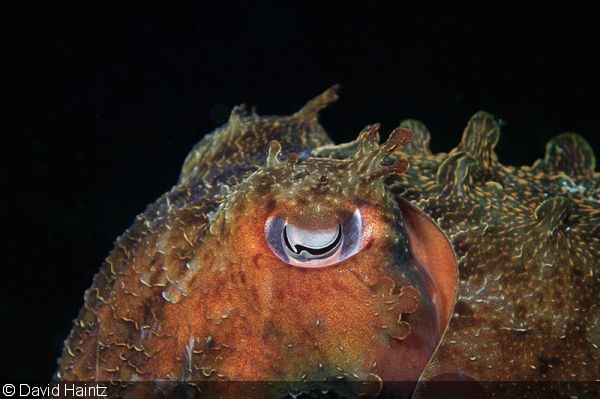 Tanya Houppermans: The colors, lighting, and focus are really nice on this shot. That sharp focus brings out the details and texture of the skin and eye of the cuttlefish. The problem here is with composition. There is an excess of negative space on the top and left of the cuttlefish, and I would like to see more of the animal. I also generally try to avoid shooting my subject straight on from the side. Try dipping slightly below the cuttlefish and shooting upward at an angle. If you really want to concentrate on the cuttlefish’s eye, a great option is to go in close. With all the colors and textures around the eye, I think it would make an intriguing super-macro shot.

Jeff Milisen: I love the detail in the cirri on this animal. It looks like the strobes were aimed correctly and the exposure was adequate. My issue with this image is in the composition. The eye is the subject, and it is placed smack in the middle of the frame, which can work if there is a symmetry in the image, but generally, I would stick with the rule of thirds. I would also have gone for a slightly different angle, as this image shows the eye in fantastic focus, but we only get a corner of the mantle, and only the top of the tentacles, and not even the whole face is in the image. 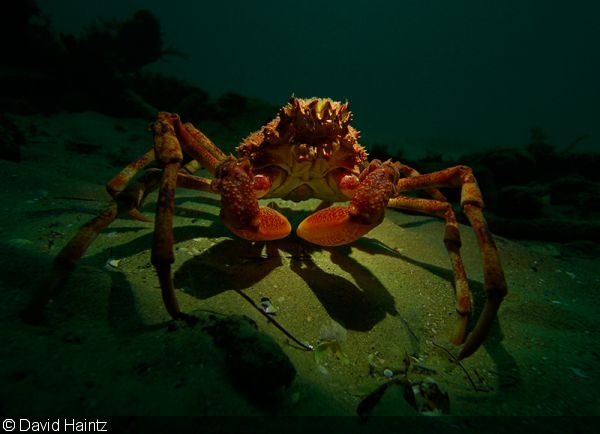 Tanya: I see where you’re going here with the dramatic lighting, and I think this image has the potential to work really well with a few tweaks. First of all, as a whole the image is underexposed. Bumping up that ISO slightly or opening up the aperture a little more is an easy fix. If you’re just using one strobe, I would suggest directing it downward and angled to where the strongest light hits the forehead of the crab. That way, you’re still getting some of those dramatic shadows (and they won’t be quite as harsh as if you’re angling the strobe straight downward), and you’re also illuminating most of the crab’s face.

Jeff: I love the eerie atmosphere created by the contrast of green and red, and that shadow is just creepy! Some of my personal favorite images depict a similar slimy feeling that just crawls up your spine. Unfortunately, the top lighting cast some harsh shadows in the details around the face that I want to see. I might have positioned one strobe over the animal to maintain that top light and another in front aimed at an upward angle to hit the face. Also, you could have gone in closer so we get more of the subject. 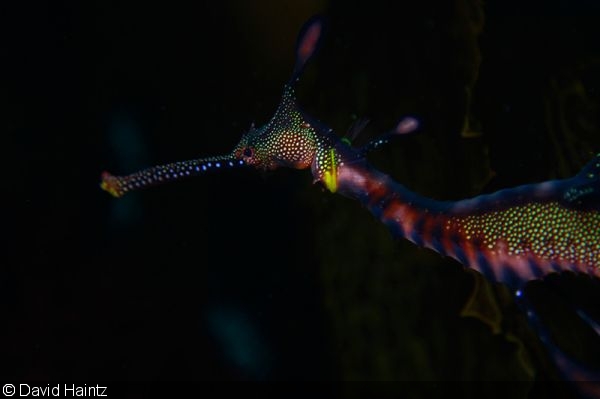 Tanya: Seadragons make such great subjects, especially with all of those brilliant colors. In this case though, I feel like I’m only getting a frustratingly small glimpse of the extraordinary hues of this animal, as the overall image is underexposed. I would also like to see the seadragon take up more of the frame, without so much negative space surrounding it. As with the cuttlefish, try to shoot at more of a slightly upward angle instead of straight on. While the eye is in focus, the unfocused snout is distracting. In this case, either a close-up of the eye and face with a shallow depth of field would work, or else go for the profile shot with the entire seadragon in focus.

Jeff: Wild seadragons are on my bucket list, and the colors on this one are just splendid! With all of their frilly bits, they are undoubtedly difficult to shoot. You did a good job focusing on the eye, but the shallow depth of field left the snout out of focus. You went for the profile shot, but the animal is turned ever-so-slightly away. You should usually strive to have the animal turned in the direction of the camera, even if only slightly. The biggest issue, though, is that the whole image is underexposed. Throw some more strobe at it or bump up your ISO and get some more light in there! Finally, there is a ton of dead space here. If the animal doesn’t fill the frame, it needs to be against some sort of interesting background. 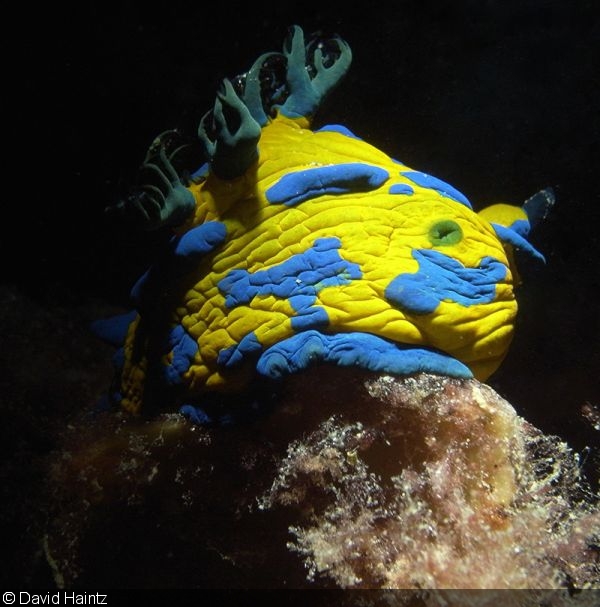 Tanya: Those colors on this nudibranch really jump off of the page! Well done with the lighting and exposure on the nudi itself. However, I find myself trying to figure out exactly which part of the nudi I’m looking at before I realize that it’s twisted away from the camera. If possible, either wait until the nudi is displaying its head again, or move around to the other side of the rock to set up another shot. I would suggest cropping the image so that it has a horizontal profile, which would allow the nudi to take up more of the frame and also remove it from dead center. It’s not enough just to have a pretty animal in the frame; be sure to think about the way the animal is situated, it’s surroundings, and then how to position yourself to create the most interesting composition.

Jeff: Nudis in the genus Tambja are all incredibly photogenic, and with the bright blue and yellow, this one is especially eye-catching. I just wish it weren't turning away. We want to see the face and the detail in the rhinophores. Once you figure out the animal positioning, then I would get rid of some of that empty space at the bottom—the rock and algae don't really add much to the image as a whole. 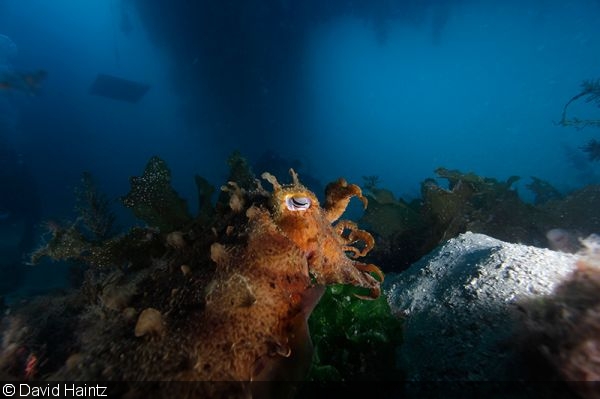 Tanya: Look at everything you have to work with here: cuttlefish, kelp, coral, sand, divers, structures—where to start? This is where you have to think about subject and composition, and decide what would make the most interesting and intriguing image. In this case, there’s simply too much going on in the frame. I would go for the cuttlefish as the main subject while leaving out the diver and much of the looming structure in the background. The contrast between the orange of the cuttlefish and the bright green kelp is quite visually appealing, so try to create a composition showing off the cuttlefish within its immediate environment. Perhaps drop below the cuttlefish and angle slightly upward to still get some of that beautiful cobalt blue water in the background, and remember to arrange your composition so that the cuttlefish is not placed directly in the center of the frame.

Jeff: Interesting approach! I love the interplay of the colors here. When composing a complicated wide-angle scene like this, you want to try to separate out your elements. It is best to think of it in terms of foreground, midground, and background. The cuttlefish in the foreground isn't really separated well from the midground—the algae/bottom. This could have been achieved either through getting closer to make the cuttlefish bigger in the scene, or by getting lower, if you had that flexibility. Also, I would have wanted the cuttlefish more evenly lit. The midground has that white pile of sand to the right that is just sort of there without interacting with the animal. Now, the background: The left side is very busy with lots of unrecognizable things. I think I see your buddy swimming through your frame. Also, there’s that distracting geometrical thing. Finally, that kelp tower in the middle of the background isn't very clear and kind of looms back there. If you’re including a silhouette, you really want the object of the silhouette to be recognizable.

Tanya: David has chosen some really lovely subjects for his photos, and his focus and lighting tend to work quite well. At this point, he should concentrate on composition and those elements that make an image capture and hold the viewer’s attention. Don’t be afraid to move around and look at the subject from several different angles. Pay attention to what you have to work with in the particular environment you’re shooting in. With just a little more attention to composition, I have no doubt that David will soon be producing some very compelling images.

Jeff: David seems to have a pretty solid control over the technical aspects of photography, such as exposure and focus. That is a large part of the battle over with. Moving forward, I would like to see him spend a little more time envisioning the ideal shot and working with the subjects. A few of the subjects were in positions that were facing away or just not visually pleasing. Let the animal do its thing, so that you might capture it when it is doing something truly awesome! David has a great eye for picking out some wonderful subjects. Now he just needs to work with them to develop that into some sweet imagery.

About David Haintz: David has been diving for over 14 years, mainly weekends and on holidays. He had always had a passion for photography when he was very young, but life took him in a different direction. Diving was the inspiration he needed to get back into photography, starting around seven years ago with a Sea & Sea compact camera and housing. He has since had a few photos published in Divelog Australiasia and DivePacific. www.aquadreaming.com.au

Relbitres Relbitres wrote:
Great!
You must be logged in to comment.
Support Our Sponsors
Advertise With Us
Newsletter
Travel with us