Pro underwater photographers Tanya Houppermans and Rico Besserdich take a detailed look at five of reader Christian Nielsen’s images, giving him pointers and feedback on how he might improve them. 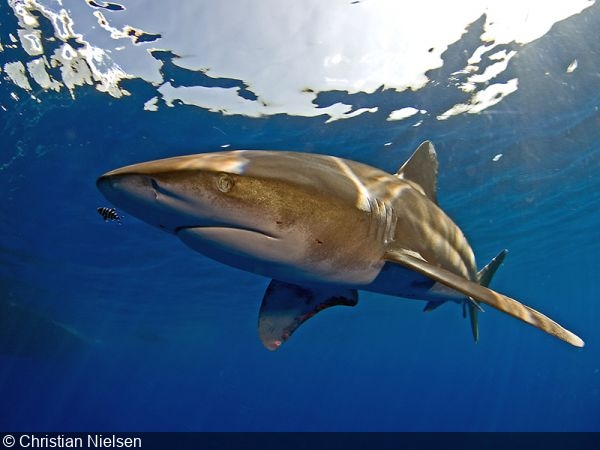 Tanya Houppermans: Great composition, and a prime example of the rule of thirds; this is where the image is broken up into thirds both horizontally and vertically with the main subject or focal point lying along one of those lines or at the intersection of the lines (in this case the shark’s eye). This tends to create a more dynamic composition, such as here where the viewer really gets a sense of the movement of the shark. To take this image from good to great, I would have liked to see the shark in sharp focus, and also the background spots removed in post-processing. Another suggestion is to decrease the highlights in post-processing. This will not only bring out more details in the sky, but will also make the light rays in the water a bit more pronounced.

Rico Besserdich: Now, is there anyone who does not love this image? What a moment, what a majestic animal, and what a nice capture. Well done! I like the close action and the compositional usage of Snell’s Window, which adds so much to the image. I also find the colors very pleasing as this is a great combination of ambient and strobe light. The shark looks good—note the reflections on its back—and so do the blue tones of the water. To make this already good image an even better one, I would suggest paying attention to details. The water could use a slight cleanup, the shark might like a bit more sharpness, and if you feel really in the mood, do something about the dive boat still visible in the background (lower left area of the image). But let’s not split hairs. I congratulate you on this successful shot. 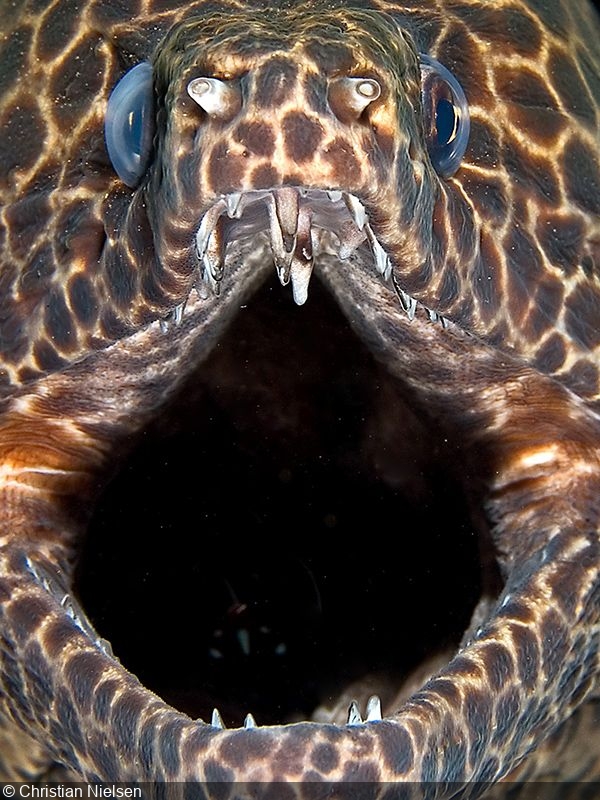 Tanya: I love a good close-up shot, especially one that shows crisp details such as the teeth and intricately patterned skin of this moray eel (nice job on the eyes too!). But there’s such a thing as being a little too close. Even though I’ve seen countless morays, it still took a couple seconds for my brain to register exactly what I was looking at. A non-diver looking at this image might have quite a bit of trouble figuring out what the subject is. Back up a little to show more of the moray’s head with a little negative space around the edges of the frame, and you’re still going to get those great details but with a clearer view of what the subject is.

Rico: I’ve always liked the idea of shooting common marine subjects in a different way, as is nicely done in this image. Furthermore, I think it’s important to make the beholder look twice, developing their own thoughts and impressions. Still, the composition of this image might perhaps be a bit “tight” and the very dark area inside the animal’s mouth dominates the frame, creating negative space where none is needed. I would again suggest paying more attention to the fine details. We have a few distracting dots here and there, and especially around the teeth, chromatic aberration is noticeable. These are things that can easily be fixed in post-production. In terms of image composition, such an image might work even better if we had only the eyes und the upper jaw visible in the frame, a task that could be achieved by using a 100mm macro lens. 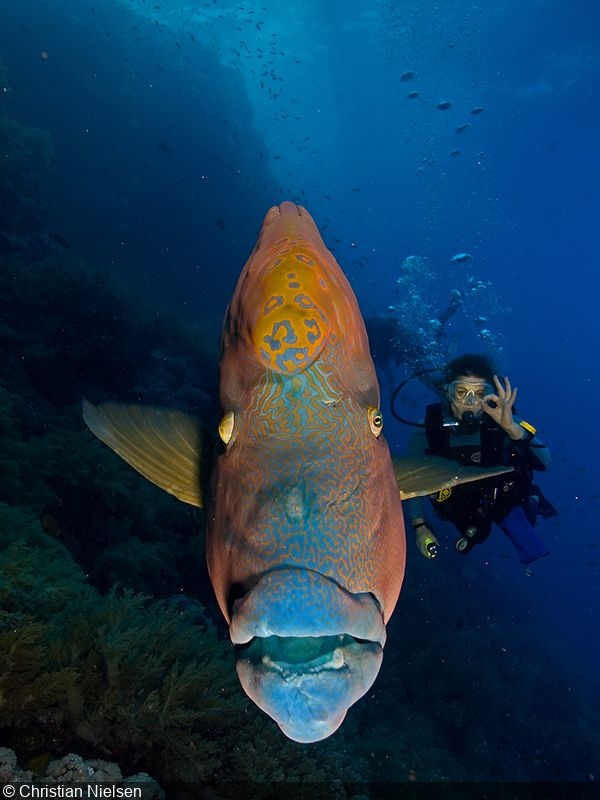 Tanya: Really nice composition on this one, and great job getting both the Napoleon wrasse and the diver in focus. The lighting on the right is ideal, but the left side is a bit dark. Bring those strobes out a little more to get equal lighting on both sides. You could also decrease the shadows a little in post-processing, and that would help to brighten the image up slightly without increasing the exposure too much. I really like the details you were able to bring out of the colorful skin patterns and the sharp focus on the eye as well. One additional suggestion is to clean up the white spots in the image, which is really easy to do in post-processing.

Rico: This kind of close-action shot always attracts the eye, even if distortions caused by the wide-angle lens and the very close focus might raise eyebrows among purists. But who cares? I personally love the close action and the color contrast and harmony between the main subject and the dark blue background. However, I think this image would work even better without the diver. While a human–animal interaction always carries a strong message, in this case the model is interacting not with the animal but with the photographer. It’s a somewhat confusing message: Why does the diver give an “OK” signal when a Napoleon wrasse swims by? Furthermore, the diver and their bubbles in the background take away attention from the beautiful main actor, the wrasse. Often, less is more. Finally, a touch of post-processing work is never a bad thing. Cleaning up a little backscatter and doing a quick job with curves and levels are not considered “image manipulation.” 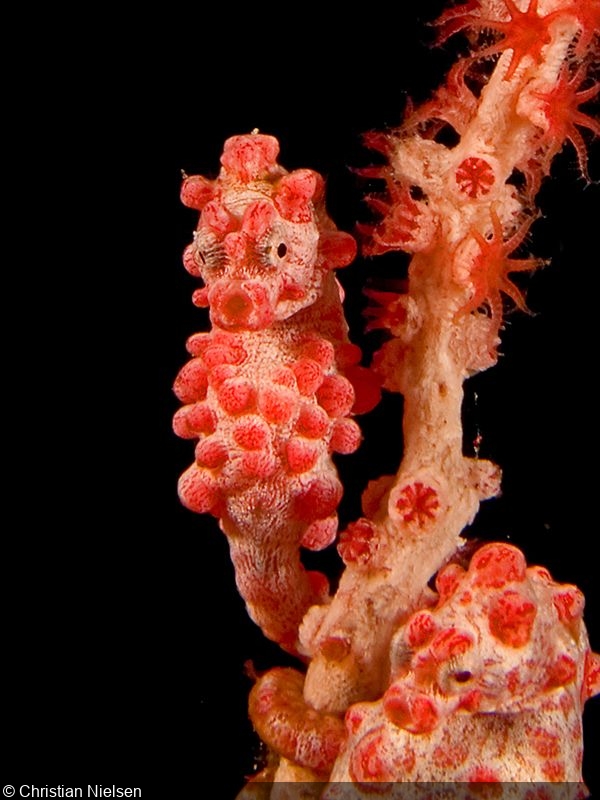 Tanya: This is definitely my favorite image of the group. Again, excellent composition and use of the rule of thirds. Great use of negative space on the left side of the frame. I love the sharp focus and crisp details. The lighting is even with perfect exposure. At first I didn’t notice the second seahorse in the lower right corner—it was a nice surprise!—but when I did, it didn’t distract from the focal point of the seahorse in the center of the frame. One suggestion, and it’s a minor one, is to adjust the white balance slightly so that the image isn’t quite so saturated in orange. Other than that, I think it’s really a good image. Well done!

Rico: What’s better than one seahorse? Two seahorses, of course! I liked that little surprise right away. Pygmy seahorses are a classic subject in macro underwater photography. And yet, they almost never look at the photographer. Therefore, I salute the photographer for having patience to wait for exactly the right moment. The composition is good, and the aperture of f/22 helped to isolate the main subject, but I would still love to have the image a bit sharper. The main issue with this beautiful shot is that the reds and oranges are slightly burned out. This is something that’s difficult to spot underwater when reviewing an image right after it was taken. However, checking the color histograms in the camera’s image review mode would uncover such burned-out reds, giving the photographer a fair chance to make some adjustments and take the shot again. A slight EV correction would help, or alternatively, just slightly increase the distance between your strobes and the subject. In this image, four inches more between strobe and subject would have done the trick. All that said, there is still hope to fix the color in post. 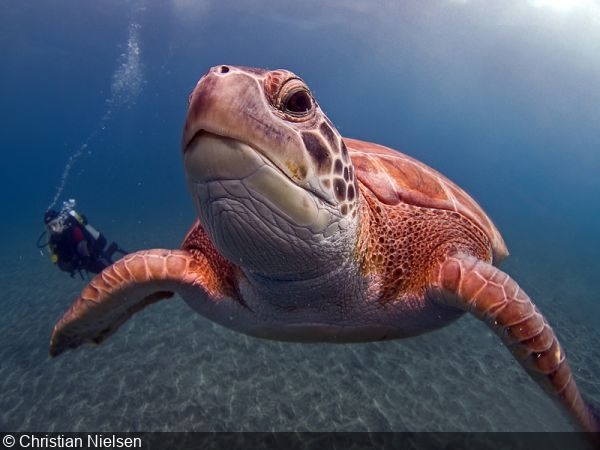 Tanya: In the previous image of the Napoleon wrasse, the diver adds to the composition because she is in focus and is engaging with the viewer by giving the “okay” hand signal. But in this image, the diver is out of focus and distracts from the main subject of the turtle. I would have liked to see this image with no diver, and the turtle in really sharp focus and completely in the frame. With those elements, I think it would have worked well as a close focus wide angle shot with just a little cleanup of the background spots in post-processing. I do like the lighting, which is even throughout the image, making good use of background ambient light and then illuminating the turtle with strobes.

Rico: Another great “close action” shot by Christian! I like the pose of the turtle and the fine details on the animal that are visible in the image. The focus is good: the parts of the turtle that are blurred do nicely show the feeling of movement. I have to agree with Tanya that this image would be even better without the diver in the background. The diver is not fully visible, not in focus, and the bubbles are distracting. Another issue is the colors. While the color of the head of the turtle looks correct, the red tones on its back and fins do look a little unnaturally red. A keen eye might spot also magenta on the turtle's throat. It seems to me that a white balance correction was applied to the image during post-production. That’s an important thing to do, but one has to check the colors very carefully. In terms of composition, try to avoid cutting off any parts of your subject’s body. Give the animal some space to swim in your frame.

Tanya: I’m really impressed with the variety of images Christian has submitted, which show his range of talent in everything from macro through wide angle photography with a diverse set of species. His skills in lighting and composition shine through in several of his images, and he also has a great command of proper exposure. I’ve noticed that many of his images are shot at slower shutter speeds, which could explain why some of the subjects appear slightly out of focus. I would suggest using a faster shutter speed, and then opening up the aperture a bit more or bumping up the ISO slightly to compensate. That faster shutter speed will help to freeze motion and bring out more details. With just a little refinement in technique, I think that Christian really has the potential to produce some great images, and I look forward to seeing more of his work in the future.

Rico: The creative power and meaningfulness of a photographer lies in his or her ability to evoke emotions. Looking at Christian’s images, I sense his strong love for the underwater realm and its inhabitants. He has succeeded in expressing that passion just by just showing us a few of his images. Is there anyone who doesn’t want to go diving right now? I also liked Christian’s versatility. We see different scenes, subjects, techniques and concepts. His already good images have the potential to become awesome ones by paying just a bit more attention to the fine details. A lot could be done simply with a bit more careful post-processing. At the end of the day, however, Christian’s images have still succeeded in stirring our emotions and making us dream, making him an effective visual ambassador of our blue planet—despite, it’s worth noting, without using the latest state-of-the-art photography equipment. I, too, look forward to seeing more of Christian images—images that have the power to turn coach potatoes into keen scuba divers!

About Christian Nielsen: Christian has been diving for 20 years. Always interested in photography, he bought a cheap film camera and started taking underwater photos. He went digital with a point-and-shoot Olympus before attending an underwater photography course with Jeff Mullins in Bali, Indonesia and seeing the results from a DSLR camera. Since then, he has been shooting all over the world but mainly in the Far East. He is very inspired by looking at other people’s photos and reading different books about underwater photography.

Gary Macfarlane wrote:
And this is another great article, lots of information

Sylvia Johnson wrote:
Amazing pics here. i am glad to see this :-)